Okay, so here goes some new stuff that I had sitting on my desktop for awhile, and a little outside of my usual repertoire. But hey, take it for what it is. You've seen me wander though all kinds of old musty historic skyscrapers, so how about a brand-new one that's just been freshly vacated? Standing next to Fairlane Mall, the Fairlane Plaza South office tower is one of the tallest buildings in Dearborn at 11 floors. It was built in 1990, and designed by the Detroit-based firm Rossetti Associates. It is owned by Ford Motor Company and largely occupied by Ford offices, or tenants whose businesses were in some way tied to Ford.

From 2020 to 2021 there was a permanent emptying-out of many Ford office buildings quietly going on in Dearborn, including the landmark Ford World Headquarters tower on Michigan Avenue, and it was not all Covid / work-from-home related. A lot of it also has to do I think with the fact that the Michigan Central Station renovation project in Corktown will be absorbing a lot of the in-person Ford employee office space once it is completed, and Covid was a perfect excuse to get started on it. 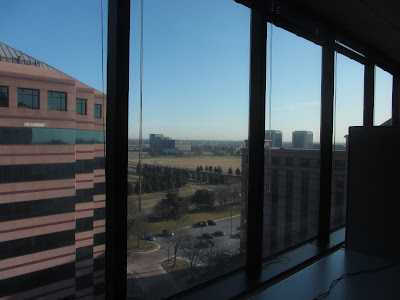 Fairlane Plaza South was one of the victims of the mass emptying; from top to bottom it was being cleaned out. During the winter of '20-'21, Ford announced that most of its in-person employees and subcontractors would remain permanently working from home, leaving dozens of office buildings in the Dearborn area vacant and for sale. In my opinion, in a post-Covid world, there isn't much hope for selling this much office space, at least at the prices they're going to ask. I think a lot of the ones in the Ford office parks along the Rouge River are going to have to be demolished. And if the demolished properties are returned to wetlands like they should be, then good riddance!
It is also worth mentioning that while Ford is spending all this money on fixing up the train station they are also concurrently dumping billions into "revamping" their Research & Engineering complex, so there are a lot of bills that will need to be paid, and I think selling off a lot of their surplus property is going to be part of that. 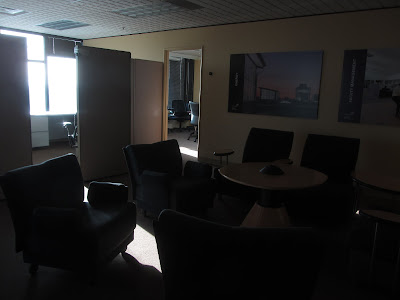 Just another bland cubicle farm on most of the floors, for the most part. There were some more interesting spots but since I had snuck in here amongst a certain group of other people, at times I had to avoid looking too suspicious. Maybe I should finally get a smartphone after all, then I won't have to rely on an obvious camera?
Nah. 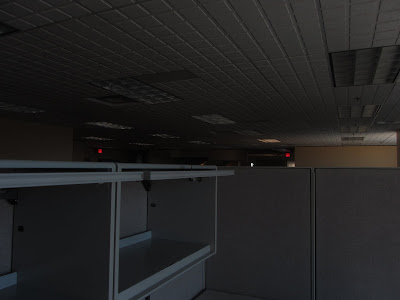 Power was still on, and there were even people's lunches still in the fridges in some of the break rooms. I ate for free that day! 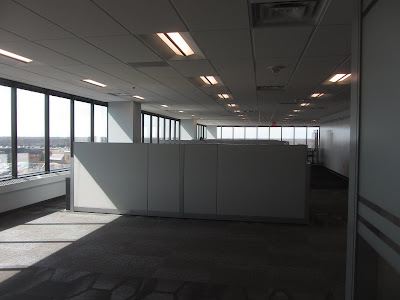 I almost got on the roof; the hatch was unlocked, but when I came back out of that stairwell to check on things first, I got shut out of the area by an automatically locking door closing behind me. Rookie mistake!
This was such a common sight: blank desk after blank desk, with computer wires extended helplessly like severed umbilical cords... 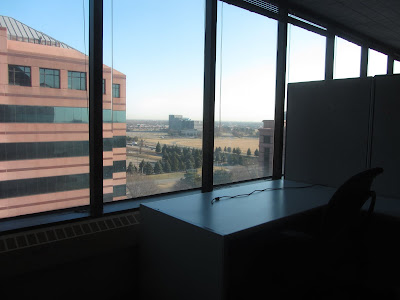 Just about everything in here is about to get thrown away.
Many of the floors were completely rented to a sole tenant, and secured with badge access at the elevator lobby, as seen below. That was easy enough to circumvent however, using my secret Masonic kung fu Fonzie-style Vulcan nerve pinch on the doorhandle... 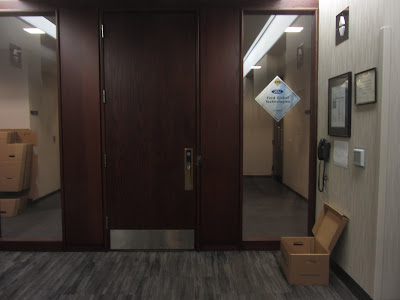 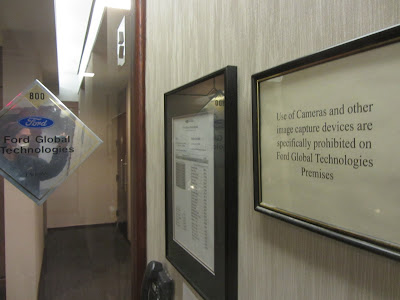 Perhaps this is a good time to mention that in April of 2020 there was a story in the Dearborn Press & Guide under the headline, "Woman cautioned against illegally entering Fairlane Plaza South." The entire three-sentence story read,

A Detroit woman who entered Fairlane Plaza South, 330 Town Center Drive, the morning of April 15, claiming she was looking for a restaurant, was advised by security personnel and police officers that there was no restaurant there, and she had no reason to be in the building.  She was warned that, if she returned, she could be arrested for trespassing. She then left the area without further incident.

I swear it wasn't me.
I do have some questions though. Mainly, is this newsworthy? And I think we can assume that by "Detroit woman" you mean black woman, right? In her defense there is in fact a cafe in the other tower, Fairlane Plaza North, and there are no signs on either building saying that the general public cannot enter. 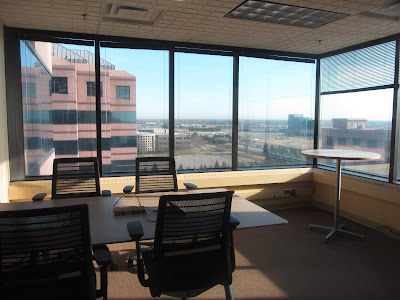 Perhaps the only reason this was considered newsworthy is because it occurred during the initial Covid lockdown of Michigan, but that was not mentioned in the article. 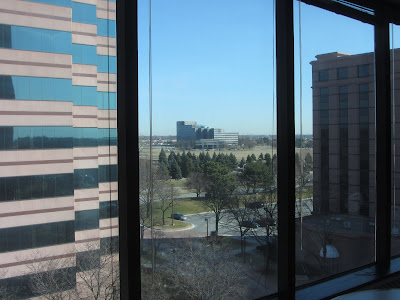 A look at Regent Court, the big blue glass building on Ford Road that contains the entire Ford Sales division if I recall correctly: 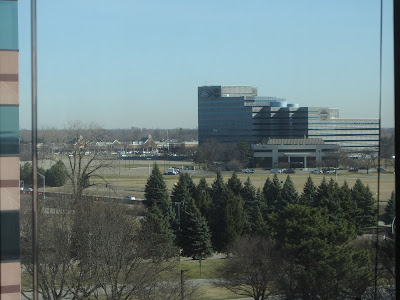 A view north up the Southfield Freeway toward the Detroit border, where "Detroit woman" lives: 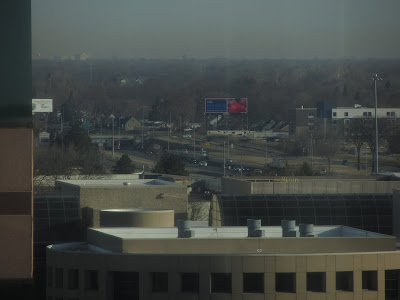 Don't mind me, I'm just living out my fantasies of having a corner office... 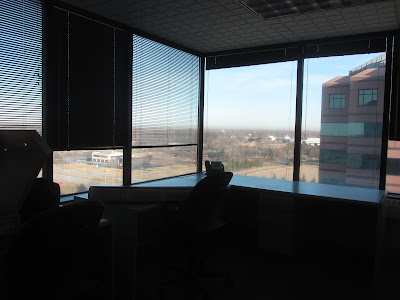 Fairlane Mall itself—once a regional shopping Mecca—is a wasteland these days, its vast barren parking lots a testament to how little traffic it gets: 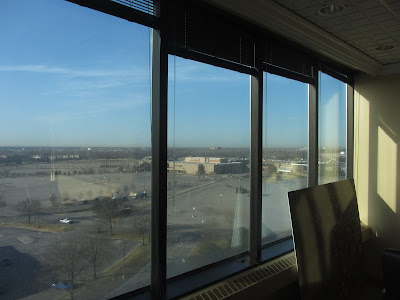 Fairlane Mall is another one that needs to be torn down and returned to a wetland. Here's a view of the old Hyatt Regency Hotel, which has been vacant for many years: 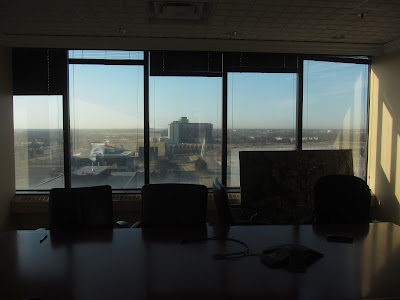 I remember when that damn place opened!
Several other office buildings along the Southfield Freeway on the edge of the mall property: 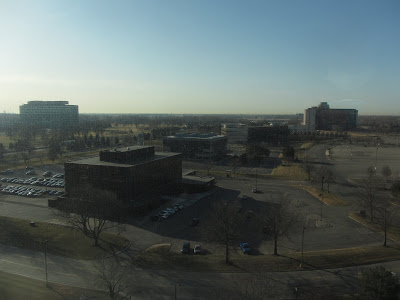 ...the big one in the distance on the left is Ford World Headquarters.
Out the window can be seen the building's twin, Fairlane Plaza North, and part of the U of M Dearborn campus: 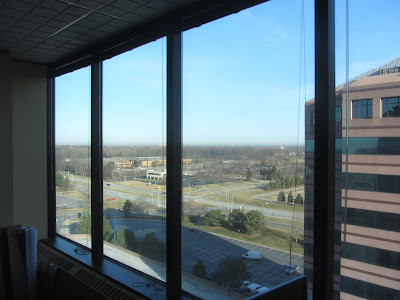 White collar graffiti:
"I wonder, can we get the icon in cornflower blue?" Absolutely. 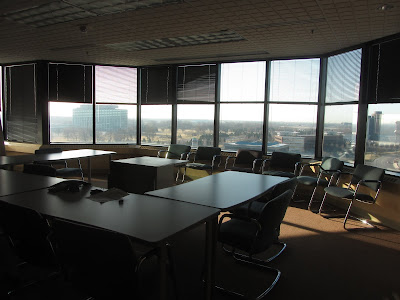 The view west, down Hubbard Drive toward Henry Ford Community College and U of M Dearborn: 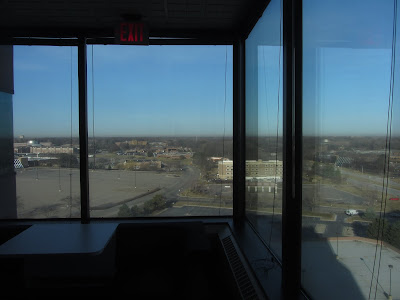 The downtown Detroit skyline was looking good from here...I have to say, watching the sunrise from up in this building is absolutely beautiful. Too bad I missed it with my camera though. 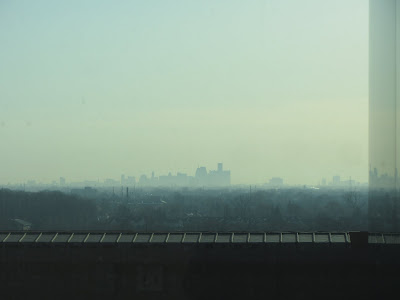 That's from across the roof of The Henry Hotel by the way. 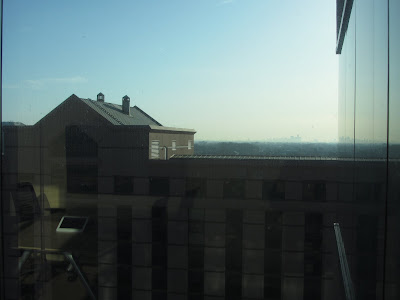 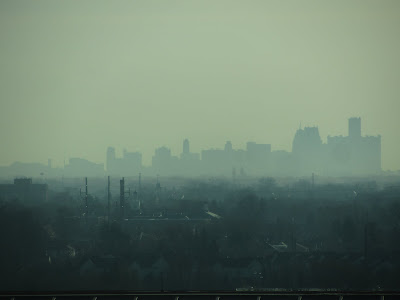 You can actually see the clocktower of the Henry Ford Museum in that shot.
This is one of those board rooms where the big people think the big thoughts, without which our society would surely collapse. You need to be high up off the ground and have lots of windows when you think such big thoughts by the way, or else it doesn't work. What would we do without the ivory towers of corporate America! 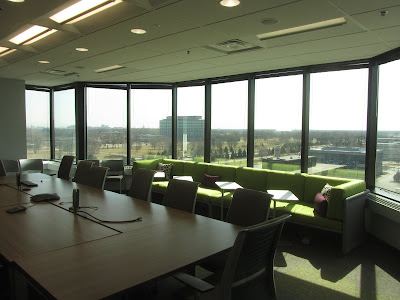 I'm sure Tyler Durden would have some thoughts on that. 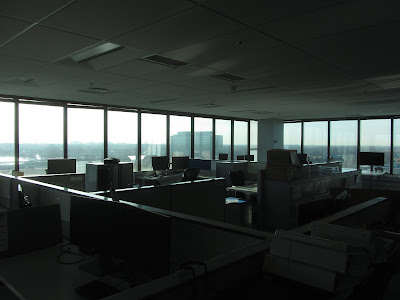 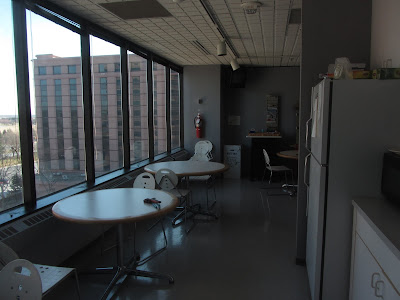 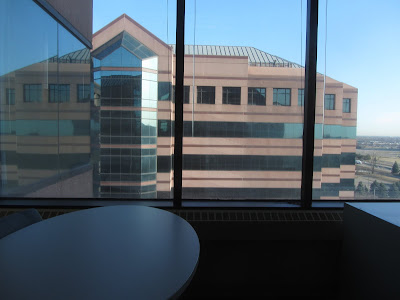