In the Senter of Nowhere

My colleague Mike Forgrave of CopperCountryExplorer.com has laboriously explored, researched, and documented the Atlas Powder Company plant much more thoroughly than I will here, so I encourage you to check out his work if you are interested in learning more. Almost exhaustedly, Mike exclaims,


The Atlas Powder Plant is enormous, covering over 1,800 acres and consisting of over 240 buildings. It's easily the largest site I have ever explored for CCE; requiring over five hours, 400 photos, and (so far) 15 posts to cover. But I’ve only just scratched the surface.

The only books I have on my shelf that discuss the Atlas Powder plant at all are Lawrence J. Molloy's Guide to Michigan's Historic Keweenaw Copper District, which briefly notes that it operated from 1910 to 1960. The other is David M. Brown's Michigan County Atlas, which calls this plant the "E.I. du Pont de Nemours Powder Co." and says that Senter's population reached 40 people in 1915. It had a post office, but I'm not sure how the name "Senter" came about.

It is perhaps worth noting that Senter Point on Isle Royale was named after prospector John Senter in 1847, who helped open the Siskowit Mine there...I wonder if they both somehow share a namesake? A quick Google Books search indicates that in the 1870s there was another prospector named Charles Senter, who discovered molybdenum deposits out in Leadville, Colorado.

A Wikipedia (pardon me) entry says that the Senter family were residents of nearby Houghton, Michigan, and the patriarch of that household was John Senter, a wealthy merchant from New Hampshire. He had a son named Henry M. Senter who became a University of Michigan football star in the 1890s, and later moved to Colombia to start a coffee plantation.

Anyway, according to CopperCountryExplorer.com, the mines of the Copper Country were generally self-reliant "except for three things which they could not find along the peninsula: coal, iron, and explosives." These were shipped in from far away, naturally at high cost, until the owners of the Tamarack and Osceola Mines decided to invest in building an explosives plant at Woodside, just north of Dollar Bay in 1884. It was called the Hancock Chemical Co.

Then the big conglomerate Calumet & Hecla began buying out all the Copper Country mines in the 1900s–including the Tamarack and Osceola–and DuPont ended up acquiring the obsolete Woodside plant through a separate merger. Both Calumet & Hecla and DuPont decided to jointly invest in building a new, modern explosives manufacturing facility within the Copper Country, here at Senter. It was called the Atlas Powder Co.

The old Woodside dynamite plant was known for accidentally blowing up on occasion, so there was much greater care taken to design this new plant with safety in mind, and they made sure to place it as far from civilization as possible. This site, nestled deep into the Dollar Peninsula was ideal–it was geographically close to the epicenter of Michigan's copper mining activities, yet the area was remote enough to where it wouldn't destroy any towns if it blew up.

The nearest town is Dollar Bay a few miles to the west, and Dreamland, on the other side of Portage Lake. The plant began operating in 1910, and as far as I know it never blew up.

The thing that makes finished dynamite safe to handle–as opposed to raw nitroglycerin, which can explode merely from being handled roughly–is dope, an inert filler (like sawdust) that blends with the nitro to improve its shock resistance. This brick warehouse was a drying house for the pulp that was used to make the dope here at Atlas Powder, according to CopperCountryExplorer. The cupola on top of the building was for venting the steam that was generated in the process.

During World War II most chemical and explosives plants across the country were converted over to manufacturing munitions for the war effort, but the Atlas plant at Senter was exempt from this, and took part in the war in another capacity.

Since copper was just as crucial to making munitions as high-explosive, Senter's plant was ordered to keep making dynamite exclusively for the mines of the Keweenaw during the war, and in fact they stepped up their production capacity quite a bit for this. Copper mining was absolutely crucial to the Allied war effort, because without copper there could be no bullets or shell casings, and Michigan's Keweenaw Peninsula was still by far the richest copper range in the U.S. at the time.

Nitroglycerin, an ingredient in dynamite, can be extremely unstable, and is sensitive to physical shock. Since Atlas was going to have so much of this dangerous stuff around, as well as other explosive chemicals, the plant and its processes had to be designed with safety foremost in mind.

The most obvious of these precautionary measures was to keep the various buildings spaced far, far apart, which is why this complex is so vast. The components of the dynamite product–blasting caps, nitroglycerin (NG), soda, and dope were all kept in separate buildings in separate areas of the plant before being combined and shipped.

Certain steps of this assembly process were very risky, namely the parts that involved transporting the nitro to the mixing houses. CopperCountyExplorer says that the assembly line alone measured about half a mile in total length...pretty big, for a final product that's smaller than your forearm. It was all done this way so as to avoid an accident being able to set off a chain reaction.

I'm not certain what this tin shed was used for, other than more warehousing?

Across a small clearing I saw what looked to be a house:

It looked like it had been built in maybe the 1930s?

According to Mike, this was actually the Atlas Powder Co.’s laboratory, "where new products and new techniques for explosive manufacturing were researched and tested."

The style of building really reminded me of the types of houses and buildings I had seen in the mining ghost town of Gilman, Colorado.

I'm not sure what these little wooden pyramids were, and Mike didn't seem to know either:

This cute little shed was actually...

This was the largest piece left of what I think may have originally been a railroad loading platform that stretched over a rather large area:

All around it was this bizarre series of wooden pilings sticking out of the forest floor that I suppose might have been the foundation to more of this loading dock:

All of the pathways here used to be narrow-gauge railroad tracks, except for the main branch of the Copper Range RR.

Naturally since it was in the middle of nowhere, Atlas Powder was required to generate its own electricity and steam heat, and therefore needed to build a powerplant. But according to CopperCountryExplorer, they also had need of a few other special supplies that were unique to an explosives manufacturing plant, such as refrigerant, brine, and compressed air. These things were piped from the powerplant through elevated distribution lines that stretched throughout the vast complex of buildings.

The smokestack was about all that was left standing, from whose base the substantial concrete foundations of the rest of the powerhouse lay stretched out:

One of the many wrecked shacks of indeterminate function that were scattered about the site:

Ava and Dan snooping around:

This narrow little cinder-block building, according to CopperCountryExplorer, was a storage and maintenance house for the electric locomotives that moved materials along the narrow-guage railroad throughout the complex. It was also where their batteries were recharged at the end of the shift:

Mike wrote that there were originally three of these little huts, one for each locomotive that Atlas Powder had at the time. Apparently they were commonly referred to by employees as "locis" (I imagine that is pronounced "LO-ki," as in short slang for locomotive).

Since combustion-powered machinery was too hazardous to use on site near high-explosives, Atlas kept using horses to pull their carts all the way up until the 1950s, when they finally got the electric locomotives. The ruins of the old horse stables are actually still standing, just a little ways north of here into the woods.

A mechanic's pit appears to run nearly the length of the floor, to facilitate ease of maintenance on the undersides of the locomotives without need of a hoist or crane:

...reminds me of my young greasemonkey days working at a Quaker State oil change garage.

These must have been material storage bins of some kind, though I don't see them on Mike's map. Also, they don't have a back wall:

Other odd forms appeared elsewhere on the forest floor...

It seemed like everywhere we wandered there was something else, some other minor structure or ruin that was connected to the plant in some way. We didn't wander much farther than this point however, since we had to be getting back home.

Mike Forgrave drew up a good map of the Atlas plant, labeling all of the buildings. On it I have circled in blue the minuscule area that my comrades and I were able to cover this afternoon: 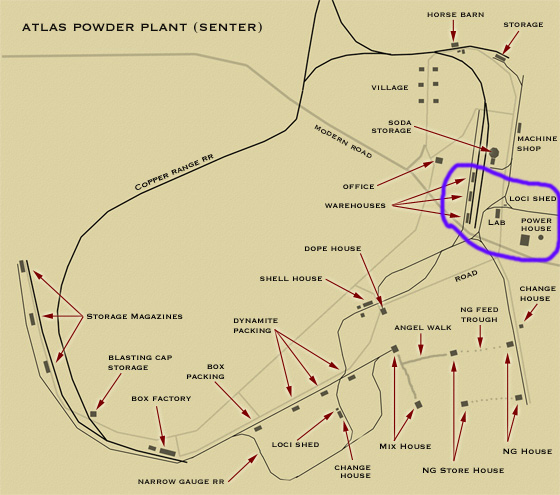 This place is huge.

Update: I just noticed my colleague Rev. Aldinger also has a detailed entry for the Senter plant on his website, Copper Country Maps.