For a Brief Moment in History

I had pretty much had my fill of exploring abandoned schools in Detroit by the time I got around to checking out the Hutchins Intermediate School on Woodrow Wilson Street. But I happened to be walking on an errand one day from my girlfriend's place near New Center, so I decided to take a quick jaunt through it and the Crosman School a few blocks away. I had no idea that at least ten famous performing artists had gone to Hutchins during their childhood. Now I wish I had taken a longer look, and more photos. 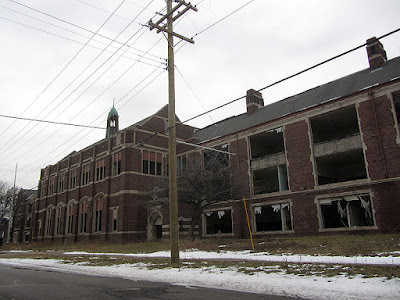 According to a Detroit Educational Bulletin from 1922, this school was named after Dr. Harry Burns Hutchins, sixth president of the University of Michigan, and was dedicated in October of that year, at the dawn of Frank Cody's administration as superintendent of the Detroit Public Schools. I spoke at length about the importance of Frank Cody as a historical figure in an older post.

An essay in the bulletin entitled The Intermediate School in Detroit, by Deputy Superintendent Charles L. Spain (et al) said that the Detroit Public Schools' building plan under the Cody administration called for an ultimate goal by the year 1930 of 123 elementary schools (grades K-6), 22 intermediate schools (grades 7-8-9), and 14 "cosmopolitan high schools" (grades 10-11-12). So far, there were five intermediate schools in operation, with Hutchins and Barbour having just opened during the second semester of the 1921-'22 school year. 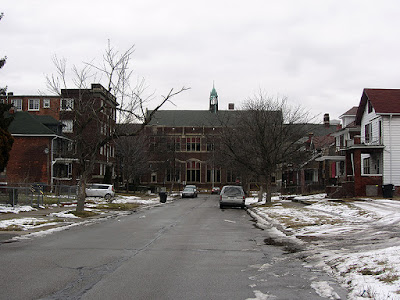 The biography Frank Cody: A Realist in Education, spends plenty of time discussing the administrative accomplishments of Superintendent Cody, who it could be said was the man most responsible for the grand scale and number of school buildings constructed across Detroit during the 1920s. Cody's building plan was designed to meet the needs of a city whose population was expanding exponentially. The book says that Barbour and Hutchins schools are twins, architecturally; prototypes of the template that was repeated several more times across the city as Cody built more intermediate schools in the various neighborhoods. The authors of the book provide a narrated tour of Hutchins for the reader, describing its many features and assets. Barbour and Hutchins were also two of the first schools erected in the city since 1919.

As with most of the other schools built in the city during Cody's reign, Hutchins was designed by local architects Malcomson & Higginbotham. 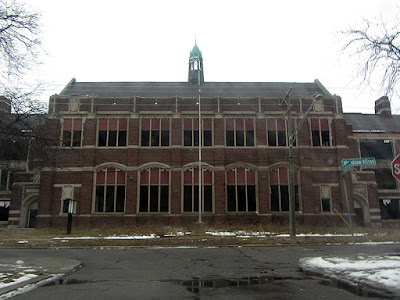 The school paper in the early days was called the Hutchins Star, and despite being produced by pre-teenagers, in the 1930s it contained interviews with such notable Detroiters as Ossip Gabrilowitsch (conductor of the Detroit Symphony), Jessie Bonstelle (founder of Detroit Civic Theater), Albert Kahn (architect), Eddie Stinson (trans-Atlantic pilot), Eleanor Hutzel (policewoman), Frank Murphy (mayor and U.S. Supreme Court Justice), Ida Lippman (lawyer), Dorothy Probst (landscape architect), and Superintendent Frank Cody. The mascot and team name for the school was the "Hutchins Bulldogs."

Hutchins School sat exactly three blocks from the starting point of the 1967 Riot, putting it right in the heart of the chaos during that week-long rebellion. According to a person posting on atdetroit.net/forum, Hutchins was one of the schools that the National Guard took over and used as a field command post during the conflict, with soldiers sleeping in the classrooms and hallways. 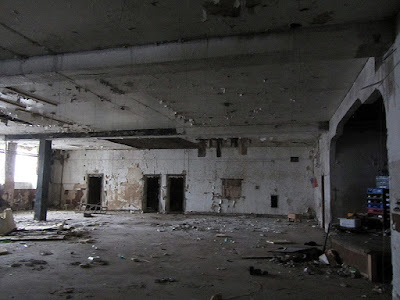 The Hutchins neighborhood started out as mostly Jewish (as illustrated by the large former synagogue, Beth Tefilo Emanuel, at Woodrow Wilson & Taylor), but became mostly black by 1960. The book Names We Call Home: Autobiography on Racial Identity contains an essay by David Wellman called "Red and Black In White America" where he recalls just how crazily diverse this neighborhood was in the 1950s while its demographic was shifting, and of how for that brief moment in time Hutchins served as a hip melting pot for Detroit stars like Lily Tomlin, Al Young (writer), Smokey Robinson, Diana Ross, Martha Reeves, Marvin Franklin (of The Temptations), Donald Byrd (jazz trumpeter), Barrett Strong (Motown songwriter), Aretha Franklin, and many other kids from very different walks of life.

I wonder if any of them ever performed on this stage in school talent shows prior to their becoming famous? 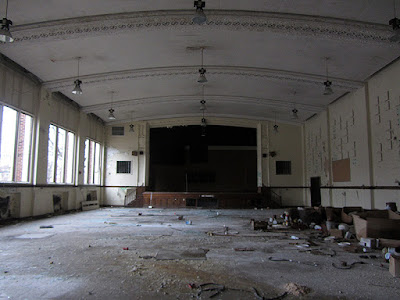 According to detroitmemories.com, actress Ellen Burstyn also attended both Hutchins and Cass Technical High. Lily Tomlin went on to Cass Tech as well, where she was voted "most popular" and "most school spirited," according to an mlive.com article. In another AP article from 1972, a friend of Tomlin's recalls the hypnotist act they used to perform while goofing off in the balcony during gym class at Hutchins. Burstyn lived at 3271 and 3277 Hazelwood, while Tomlin grew up at 8917 Byron Street, one block from the school itself.

Burstyn and Tomlin were a little older than the Motown kids; having been born in the 1930s, they would have just left Hutchins by the time Aretha attended, who was born in 1942. Predictably, it was right after the 1967 Riot that the school's enrollment began on a downward trend from which it would never recover, as the surrounding neighborhood's population began to thin out with the onset of white flight. Thirty years later, the school would be deemed to have too few pupils to remain open. 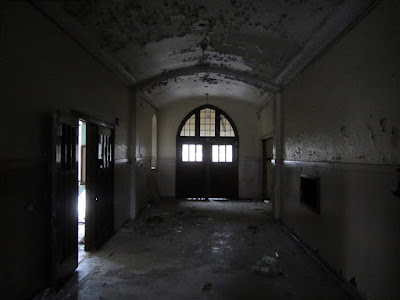 An obituary in the June 4, 1998 Free Press told of the life and times of one more notable Detroiter who was affiliated with Hutchins, Robert Orse, a humanitarian and former teacher there, whose most noteworthy accomplishment may have been persuading the City of Detroit to institute formal plans for integrating more black employees into the ranks of its police and fire departments after the 1967 Riot. He also fought to improve regulations and conditions for inmates at Wayne County Jail, he worked in labor relations at Chrysler, and promoted fire and auto safety with AAA. 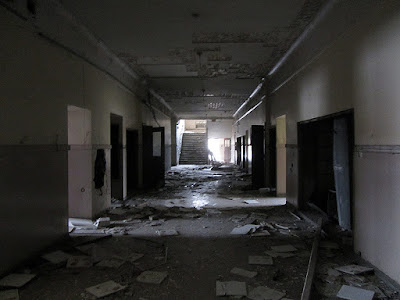 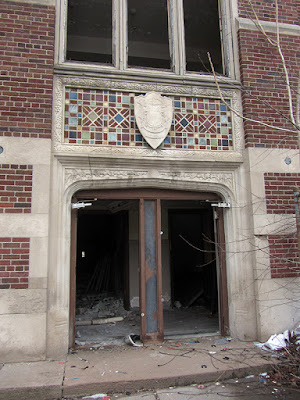 Blight and crime has been a serious problem in the Hutchins neighborhood for decades. A Free Press article from March 1981 tells the story of the abandoned house at 1503 Blaine, across the street from Hutchins' playground. In January of that year a 12-year-old girl was snatched from the school grounds by a middle-aged man who forced her into the house, where he raped her. The residents in the area had been trying to get the city to do something about 1503 Blaine for five months prior to the incident. 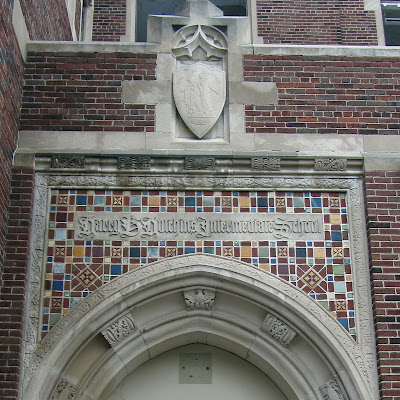 Perhaps it was for the best that I didn't spend more than my brief moment inside Hutchins; according to one fellow explorer, the place was wired with battery-powered motion-sensing security cameras that fed video directly to police. If you want to see a few more good photos of the interior, check out his HERE. 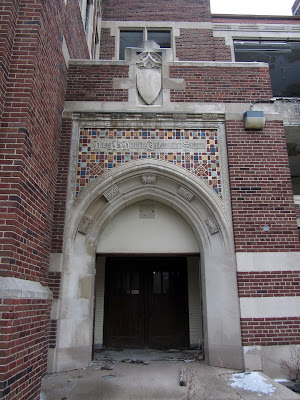 The Hutchins program relocated in 2007 to the futuristic new McMichael School building on McGraw & 16th, until it closed in 2011, becoming a Detroit Police facility. Meanwhile the Crosman Alternative School next to Herman Kiefer Hospital moved into the old Hutchins building. By 2009 however the Crosman program ended as well, and the old Hutchins School was abandoned.

Just for reference, I marked up the following aerial photo taken from Bing.com to show the disposition of this school and the other culturally important buildings/sites in this neighborhood of Virginia Park that I have posted about such as the Crosman School and Tried Stone Baptist Church: