To the Ends of the Earth

On an autumn trip to the Upper Peninsula in 2014, I decided that it was time to finally visit the westernmost part of my home state of Michigan. I had already been to its southernmost, northernmost, easternmost, southeasternmost, southwesternmost and northeasternmost points. And now I can say I've been to every corner of the state of Michigan. I bet you're so f#$%ing jealous you can't even stand it. By the way, for you nitpickers in the audience there isn't really a northwesternmost corner, since it would also basically be the same as the northernmost. 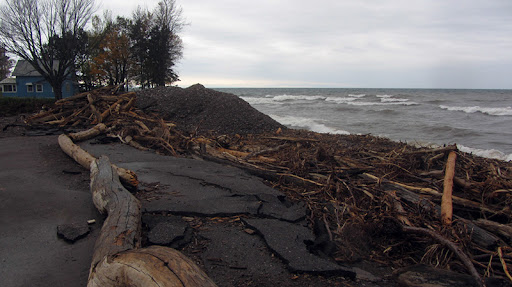 We had come out here not only to indulge my geographical fetishes but also so that my partner could do some work. Our job today was to survey some damage caused by a recent storm surge that resulted in severe erosion along the shoreline of Lake Superior at Little Girl's Point County Park.

Lake Superior was still in one of her autumn moods that particular day, and I was surprised to learn that the shoreline here was--up until very recently--approximately 50 or 100 feet further out than this. You can tell by the utterly fragged parking lot just how much has been eaten away like so much dust. Moral of the story: "Water Always Wins." I bet the guy who lives in that house was getting awful nervous. 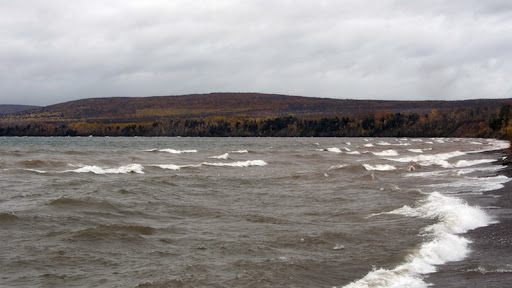 The borderline between Michigan and Wisconsin at our state's westermost point is marked by a spectacular waterfalls on the Montreal River, Superior Falls, but as you will see further down, the falls were, sadly, not falling during our visit due to hydroelectric diversion.

Michigan's most western tip lies in Gogebic County, at the tail end of the Porcupine Mountains, as you can see here. It is also part of the tiny slice of Michigan that falls within the Central Time Zone, which may surprise many people. Perhaps some life-long Michiganders will even find it shocking to learn that this part of Michigan lies further west than the city of Chicago. Kind of a weird concept to think about. 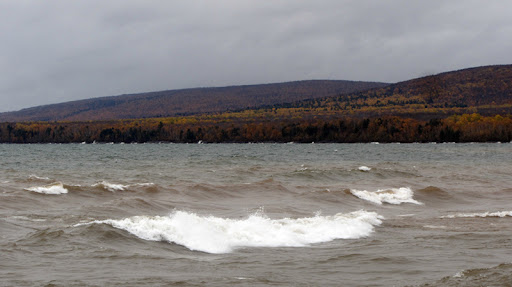 Little Girl's Point also has a couple Native American legends associated with it that were recorded by Schoolcraft, where there was some terrible inter-tribal battle fought here in ancient times, and something about a chief's daughter being taken into the spirit realm by a forest enchantment. One thing I do know for certain is that somewhere near the mouth of this snaking river was also the site of an Indian village and some ancient burial mounds. Whether they were associated with such a battle or predated it, again, I am not sure. 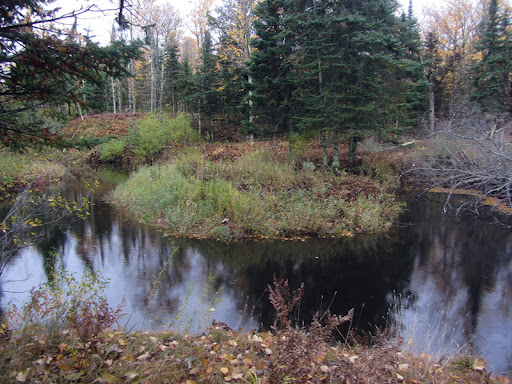 We spent about 20 minutes looking along this river, but we found no such evidence of mounds...by the looks of the wildly meandering river it had probably shifted its bed constantly over the course of the millennia, and may very well have eaten away the mounds long ago. 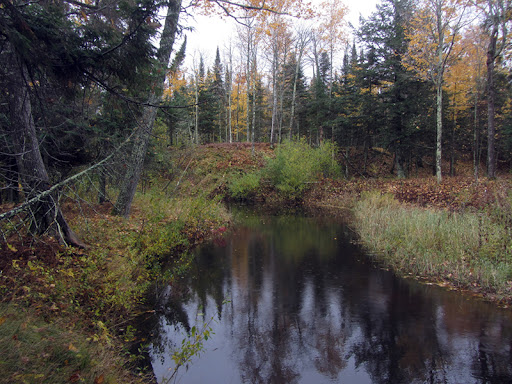 Leaving Little Girl's Point behind we shot through some absolutely gorgeous autumnal scenery for several miles toward the true westernmost geographical point of Michigan, which is where Highway 505 tapers out before crossing into Wisconsin.

Most of the border between Wisconsin and Michigan's Upper Peninsula is mostly marked by the Montreal River, which snakes through 80 miles of deep forest and hills before finally dumping over a waterfall into Lake Superior at Michigan's westernmost tip. There was a border dispute between Michigan and Wisconsin once, around the time of World War I. 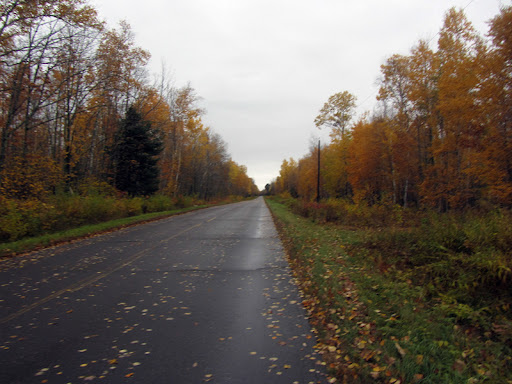 All of a sudden I had to bind up the brakes on my truck on this quiet country road when I found that a bridge had been taken out, and was still in the process of being rebuilt! 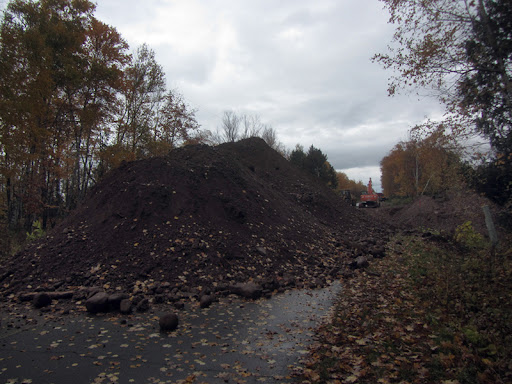 I looked at the muddy gorge before us, and decided that the last mile or two could be hiked on foot, even though we had two dogs with us. We left the car in the middle of this desolate road and made ready for a foot expedition. I believe this bridge marked the crossing of the Treasure Creek. 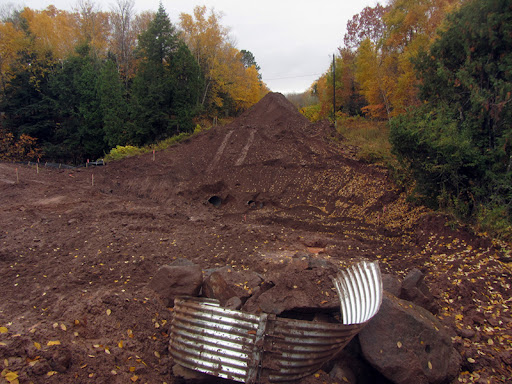 After a slippery, mucky misadventure down through the gaping ravine and up to the other side where the road continued, it was a rather eerie walk down the remainder of the highway with no signs of human life anywhere around us for the last two miles. It was like being in the Walking Dead or one of those recent zombie movies where human civilization has ended. This is the only road that goes through this corner of the state, and the nearest town is Hurley / Ironwood, about 20 miles away.

I was even more amazed by the fact that my girlfriend had not started giving me any @#$% about the fact that we were now covered in mud and on some stupid mission walking to the literal edge of nowhere. The desolation did however cast a certain drama upon the entire event that was especially fitting, given where we were going. 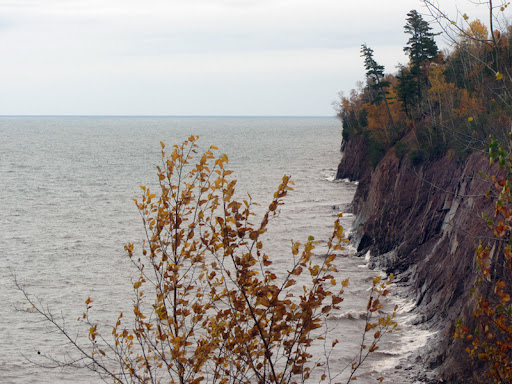 At the end of our hike, we came to a small park with a walkway that led down toward the shore. This was it. Through the fire-flecked oak leaves, I could already see the tiny peninsula that was our goal: 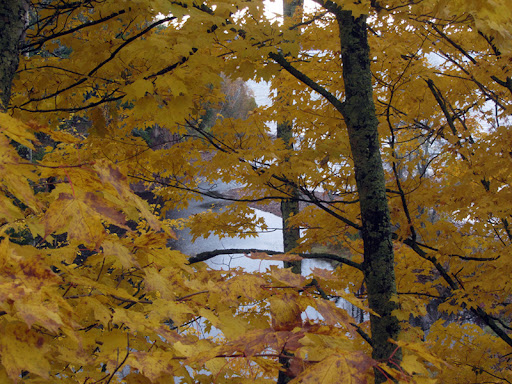 First we had to walk the stony beach for another hundred yards, where waves and cold winds were buffeting the brown sandstone cliffs: 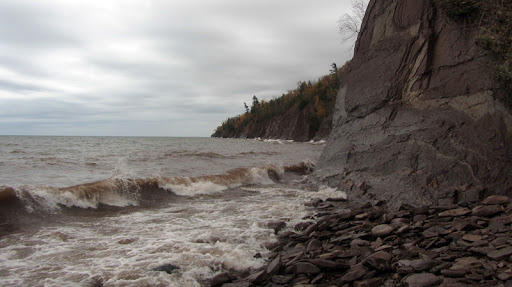 The arm of land extending out in the distance to the righthand side of this next shot is Wisconsin: 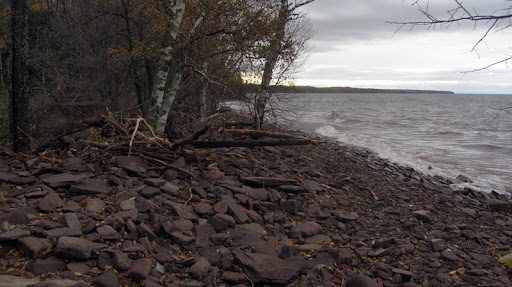 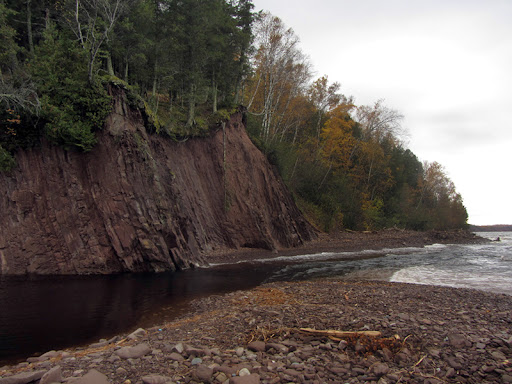 This rocky bluff on the opposite side of the Montreal River's mouth was the beginning of Wisconsin. 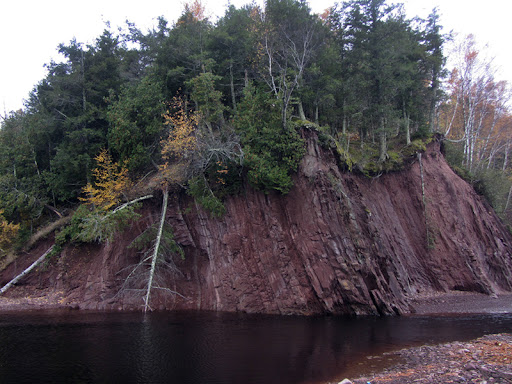 This building in the distance was a hydroelectric station: 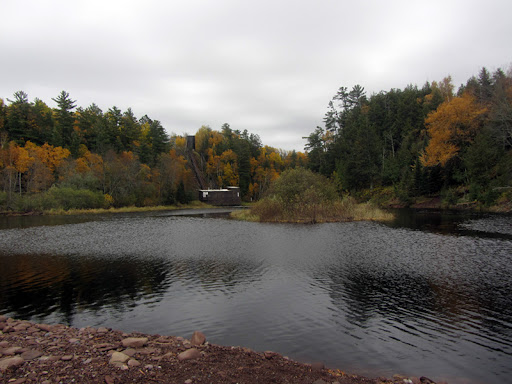 The turbulent waters here were a mixture of cold black river water and cloudy brown lake water, where the Montreal mingled with Superior before heading on its way. 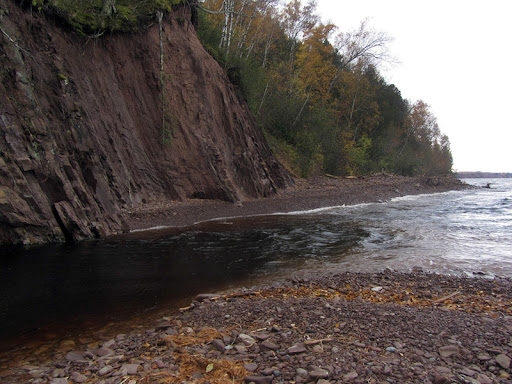 A look back from where we had come: 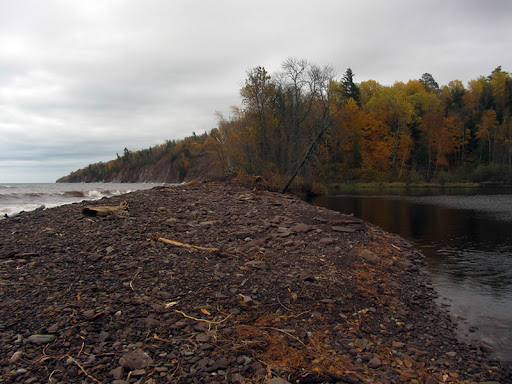 Gogebic County was set off from Ontonagon County in 1887, and flourished as a prominent iron mining district once the railroads were able to make it this far into the wilderness. The town of Bessemer became a center for forging steel rails, and according to author Roy L. Dodge, it also had an early reputation for lawlessness and battles between rival mining camps. I explored a couple iron mines and a school near here in an older post. 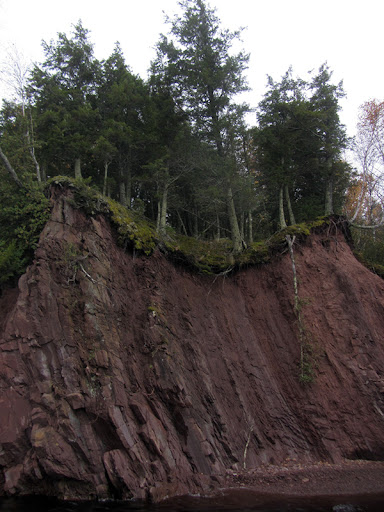 Gogebic County peaked in population in 1920 at 33,225 people, but today it has slipped to less than half that. 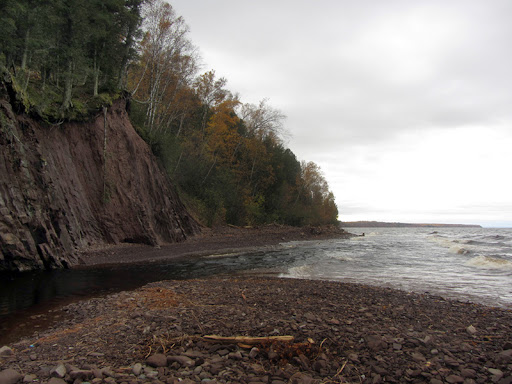 We decided now to go look for the waterfall that was supposed to lie slightly upriver from here. 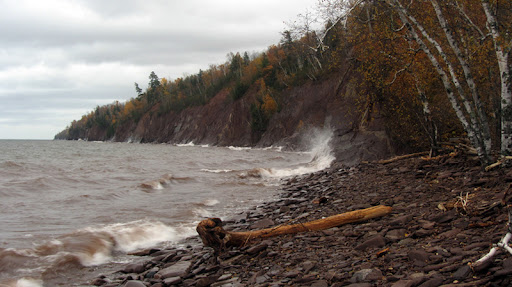 We walked past the hydroelectric building along the rocky riverbanks to find a large pool, but I could hear no waterfall... 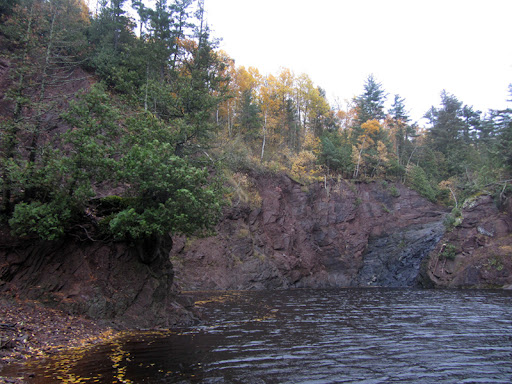 As it turns out there is a dam just a little bit upriver from this cliff that was shut, and that was why the falls were absent today. 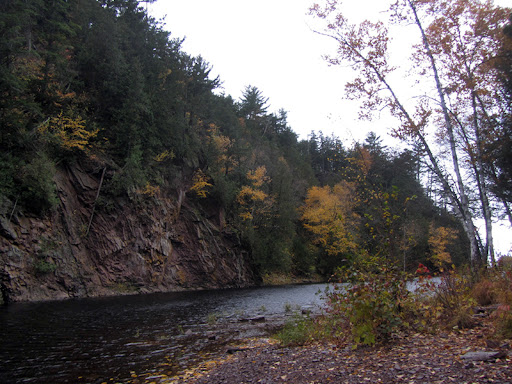 I imagine this was about where Superior Falls would have been: 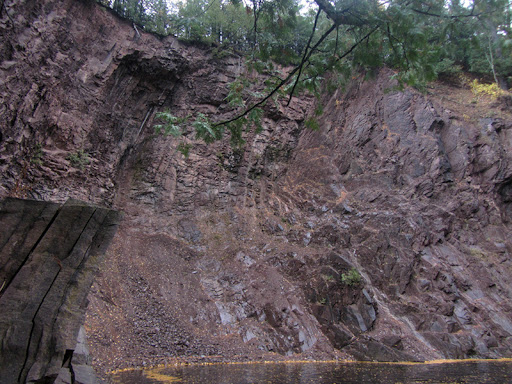 What a dramatic little cove however! The vertical strata here was a really cool break from the ordinary. 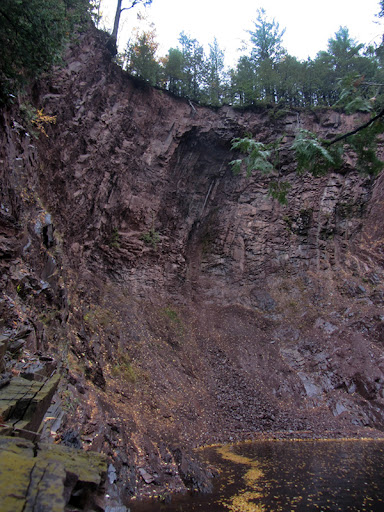 Here is a LINK to some photos of what the falls are supposed to look like when the dam is open. 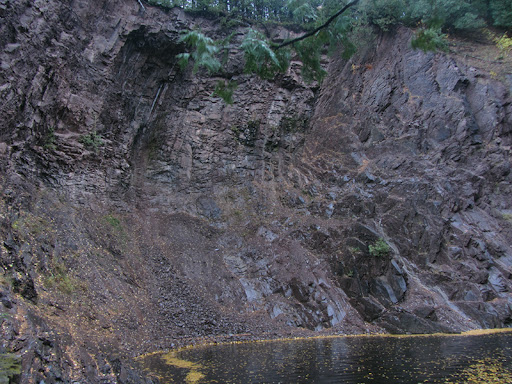