As I was out walking around the neighborhood one winter's day, I decided to make a quick pass through the old Crosman Elementary School. That was the same day that I also checked out the Hutchins Intermediate School and the Tried Stone Baptist Church, since they were all in the same area and sitting wide open. 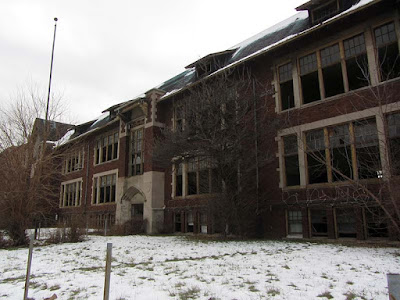 An article in the May 28, 1911 Detroit Free Press shows that Crosman School was designed that year by the local architects Malcomson & Higginbotham, and was expected to relieve crowding at the Duane Doty and Fairbanks Schools. W.G. Malcomson was quoted in the article as saying,

It is interesting to note that Detroit's schools of later construction have a greater popularity than those of any other city in the country. There was a time some years ago when people would make a strong protest against having schools located in their neighborhood. The use of diversified designs for the building and the attractive architectural individuality given each one have made the new schools a welcome addition wherever they are placed... 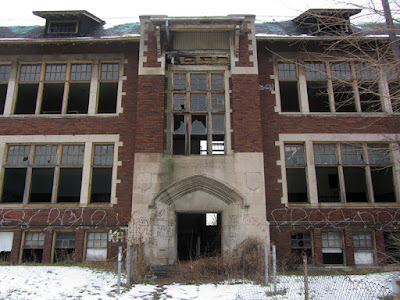 Malcomson & Higginbotham designed plenty of other notable buildings in Detroit, as well as most of the Detroit Public Schools from that era, including Old Main, McMillan High School, Hutchins Intermediate School, Jane Cooper School, and the John S. Gray Branch Library. 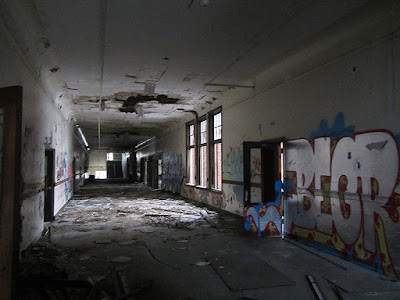 According to the book Histories of the Public Schools of Detroit, this school was named after Miss Caroline Crosman, a Philanthropic educator who taught in the Wilkins School, and who was principal of the Bartstow School for over twenty years. She was influential in promoting the field of education in her day and was held in wide esteem by both her pupils and her peers. 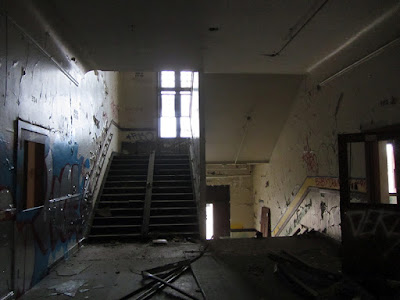 On the c.1915 Sanborn map of the area, Crosman School's address was shown as 1501 Hamilton, since the Lodge Expressway had not been built yet. Crosman School also predates the Cody administration's building boom, but has at least one addition that dates from that era of expansion. 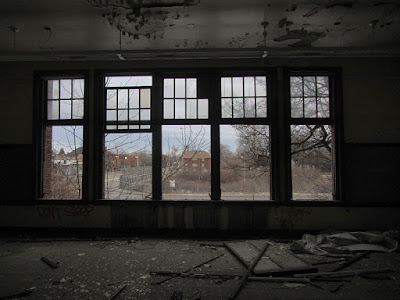 As discussed in my post about nearby Hutchins Intermediate School, famous actress Lily Tomlin grew up in this neighborhood and went to this school, as well as Hutchins. 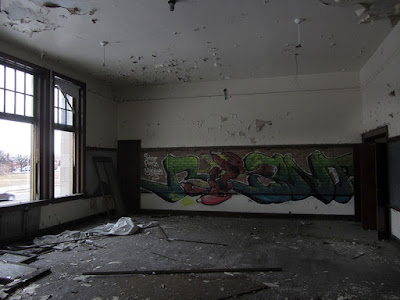 
I grew up on Hazelwood, between Byron and Woodrow Wilson, near John C. Lodge and Clairmount in the old neighborhood that burned down in the '67 riots. My old apartment house got gutted by fire and later it was torn down. My dad used to hang out on 12th Street, and I'd go to the bookie joints and bars with him. I was very socially conscious as a kid growing up in my neighborhood, which was a predominantly black neighborhood.

The photo above, from classic.lilytomlin.com, was most likely Tomlin's class picture taken while at Crosman School.


This was when I graduated 9th grade, I guess, so I must've been 14. I left Hutchins Jr. High and went to Cass Tech H.S. Unless this is from Crosman Elementary. Could I be 11? On my way to Hutchins? I seem too young looking to be going to high school. Plus I was so hoody in the 10th grade. If I wasn't thinking it I should've been, "I should get a Breck ad with this cool hairdo." 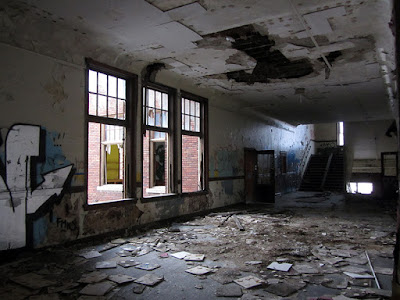 Another famous Detroiter, Motown bass singer Marvin Franklin of The Temptations lived directly across the street from Crosman School, at 1160 Clairmount, according to the book Home in Detroit, by T. Burton. So I'd say that it's another safe bet that Mr. Franklin went to this school as well.

I spoke more about Lily Tomlin's life in Detroit as well as the unusual number of other famous performers who came from this particular corner of the city in my post about Hutchins Intermediate School. 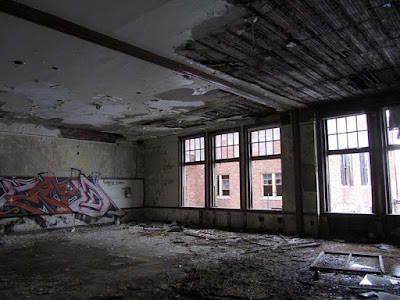 In the 1990s Crosman Elementary became known as "Caroline Crosman Alternative High School" which was dedicated to students that were in need of remedial help in an alternative school environment. Which might actually describe most kids in the city of Detroit, but anyway.... 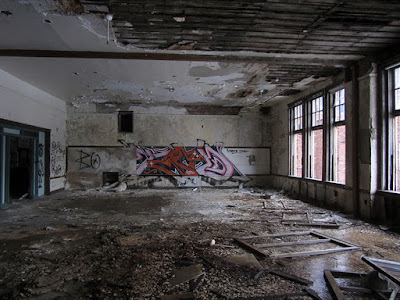 In 2007, Crosman was closed down due to the building's poor condition, and the remaining students were combined with Hutchins Intermediate School nearby, which in turn also closed not long after. The vacant Crosman building has faced the threat of demolition, but so far is still standing. 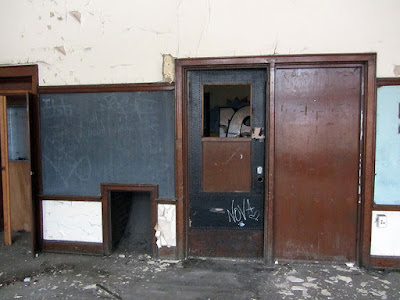 I remembered seeing riveted-leather doors like this in the Clark School in Flint. 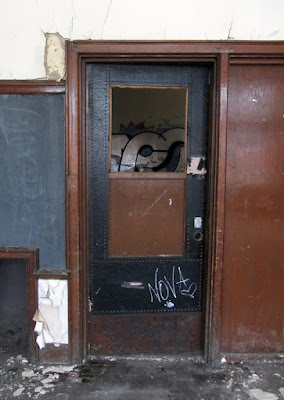 It's probably a good thing that I didn't grow up going to school in an architecturally pleasing building such as this...even in the sterile modern 1950s school that I attended, I still had a problem with daydreaming and looking out the window instead of paying attention to my work. 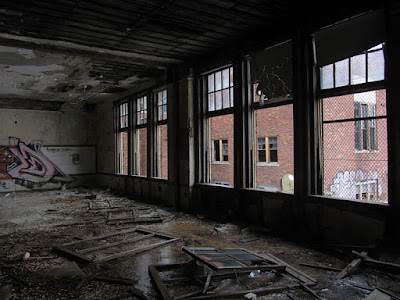 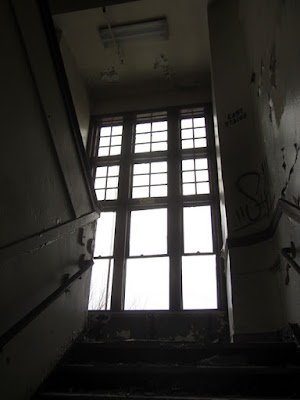 Across the street looms Herman Kiefer Hospital, another landmark along the Lodge Expressway: 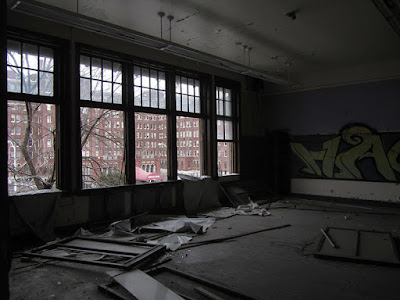 In this next shot you can also see the Fisher Building towering in the distance to the left: 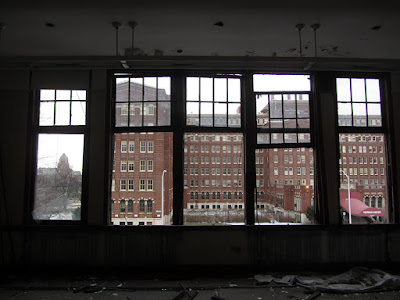 Looking at the back of the school shows the way in which the building has been added-onto over the years, including a gymnasium, an auditorium wing, and extra classroom space: 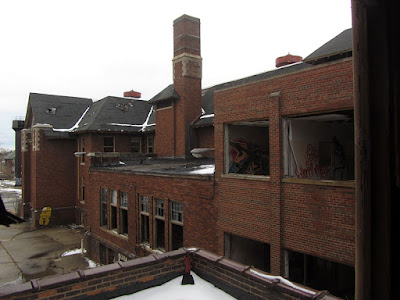 This bizarre next shot shows a rift between two dimensions... 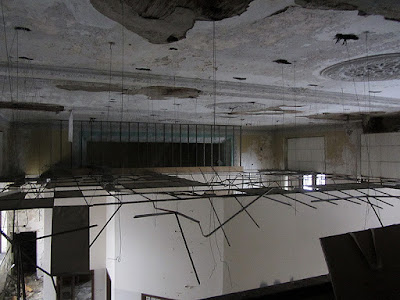 ...on the bottom half, the drywall-partitioned sham of modern renovation; above its crumbling veil of drop-ceiling tiles, the old classic school auditorium of yore still exists, waiting for the illusion to be dispelled. I was standing in the former balcony when I took the shot. 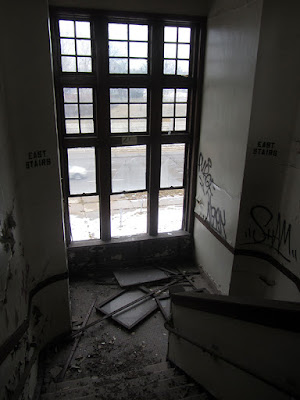 A shot from the building's Clairmount side shows the Tudor / Arts & Crafts flair applied to the school, perhaps to make it adhere better to the houses of the surrounding neighborhood: 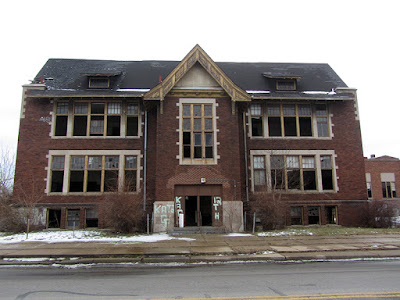 I was standing next to Marvin Franklin's house when I snapped that shot.

Plans were announced in 2015 to convert the also-vacant Herman Kiefer Hospital complex into a community style development of some sort, and they speculated that Crosman and Hutchins schools might eventually be included in that. 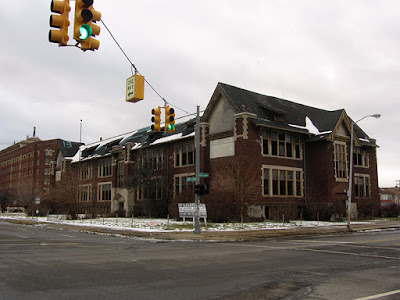 Just for reference, I marked up the following aerial photo taken from Bing.com to show the disposition of the Crosman School and the other culturally important buildings/sites in this neighborhood of Virginia Park that I have posted about, such as Hutchins School, and the Tried Stone Baptist Church: