In a little pocket of the tiny industrial Detroit suburb of River Rouge is a small abandoned ice plant. It certainly isn't the most interesting looking place to explore, but it was there. 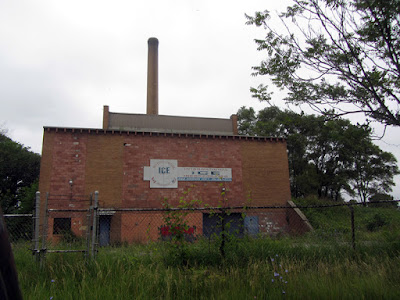 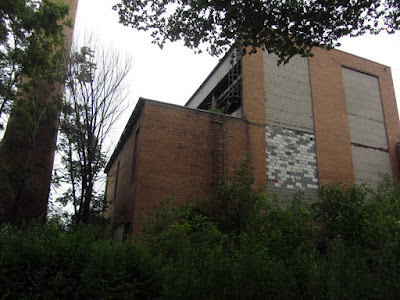 Screw it, let's check it out. 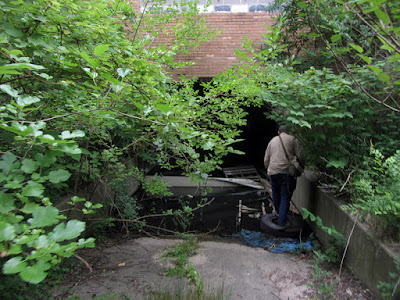 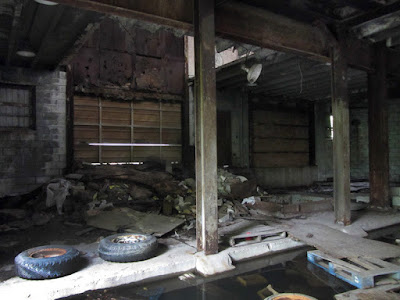 There may have been an ice plant here c.1900 that may have been replaced by this one, but this building is definitely not that old. Unfortunately my Sanborn map collection does not feature this location, so I can't check to see whether it gives a date. 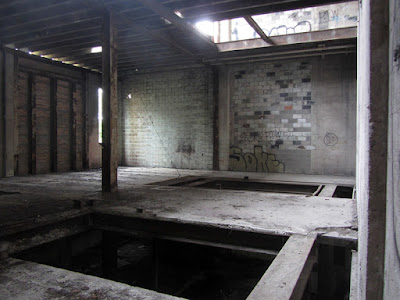 Also unfortunate is the fact that I couldn't really find out much info about the International Ice company itself via my usual resources either. Part of the problem is that it has such a generic name, which makes it harder to query. Usually I don't give up this easy, but I have a strong feeling that the story behind this place isn't all that enthralling anyway. 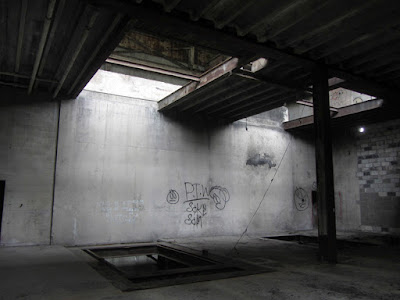 The International Ice company seems to have only been formed in March of 1988 and was dissolved in July of 2008, according to a business database. So it's very possible that this building was not always an ice plant. 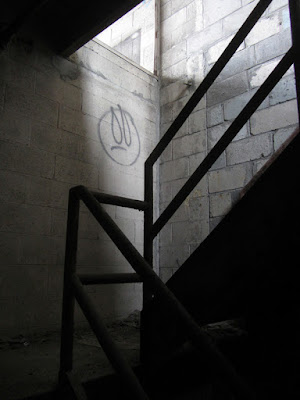 Heading up to the top floor... 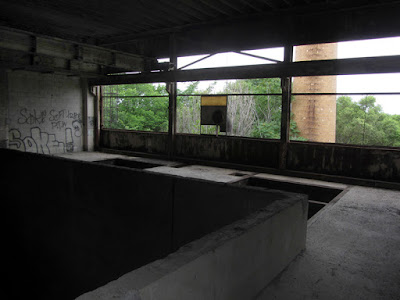 All these large openings in the floors are where the ice was formed into cubes. By pouring supercooled water through a square-shaped hole, it caused the ice to freeze in the shape of cubes. Have I ever lied to you? 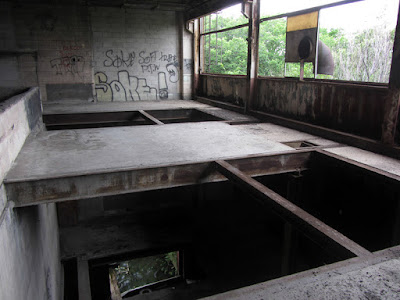 Look closely and you'll see somebody graffitied a Twisted Sister logo on the wall here: 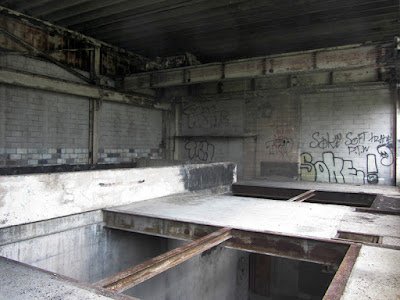 Climbing the ladder to the roof: 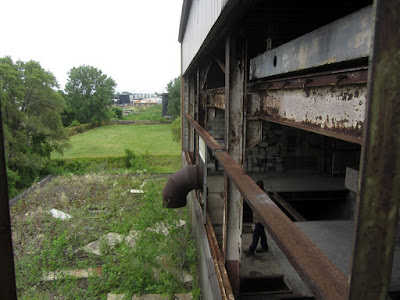 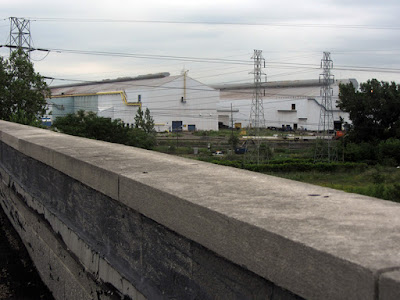 The City of River Rouge is like three square miles in size, while two of those square miles are covered by the Great Lakes Steel Works or other heavy industry. 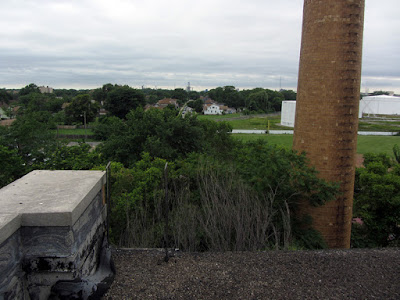 A large proportion of those industries are visible from this rooftop. Here is Marion Highway: 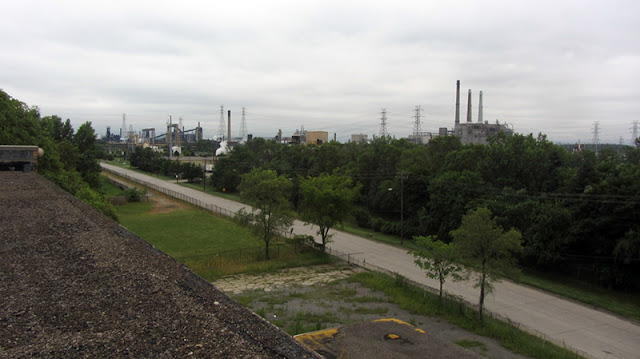 A zoom-in shot shows the U.S. Steel works on Zug Island, which is also part of River Rouge: 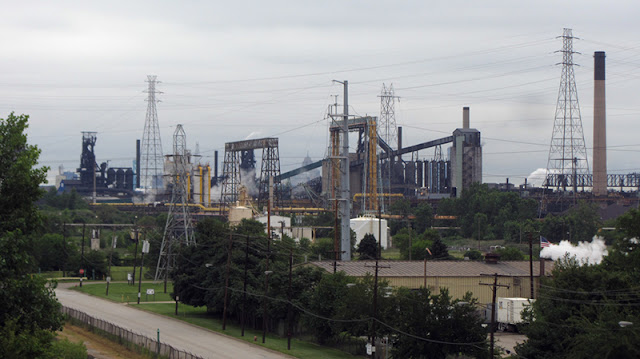 Looking even closer, we can see some of the downtown Detroit skyline behind it, particularly the Penobscot Building: 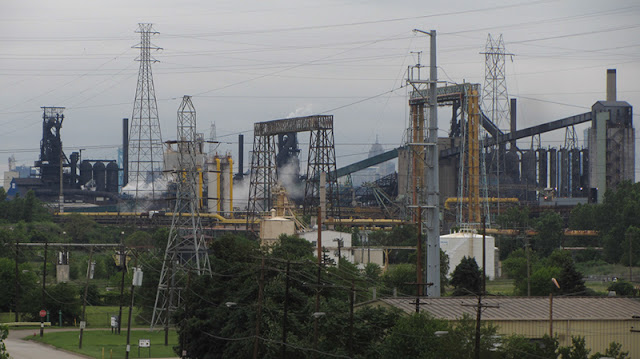 Trains were everywhere; there are a lot of tracks in this area: 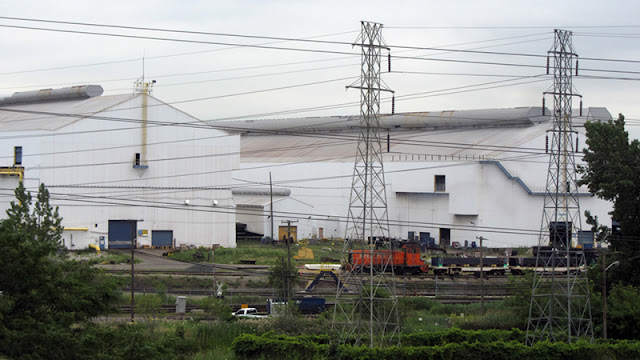 On our way out, my Spidey senses tingled to tell me there was trouble. I motioned to stop Cavemonkey and sure enough, as I was glancing through the dense screen of foliage around us to see what was going on outside, I glimpsed the corner of a police cruiser next to my truck at the ballfield. Clearly he had some idea that we were in here, so I made a split-second decision to leave by a different way before things got too sticky. I knew that Belanger Park lay nearby in the opposite direction from the cop, and we could sneak out that way and avoid him seeing us come out. 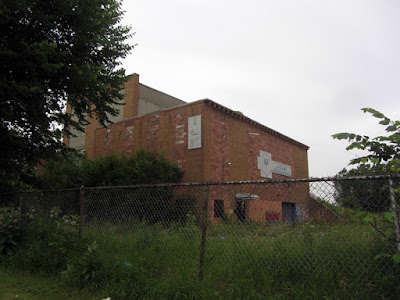 We started nonchalantly strolling down the sidewalk to the park on the Detroit River. Sure enough, about 30 seconds later here comes this cop rolling up next to us asking what we were doing, whether we were in "that building," and whether it was my truck parked over by the ballfield. I said we were looking for Belanger Park, no we didn't go in "that building," and yes that was my truck. He scowled and sped away, leaving us to enjoy our impromptu stroll to the river.