The St. David parish of Detroit was established in 1921, named after a Welsh saint from the 7th Century. The name choice was also a subtle hat-tip to the original landholder, because the site for the church's first building was donated by the estate of David Trombley, a farmer in the area.

This is the elementary school; the high school was across the street, built in 1956, although St. David discontinued its high school program in 1971. The school's teams were called the “St. David Aviators,” since they were right next to the Detroit City Airport. 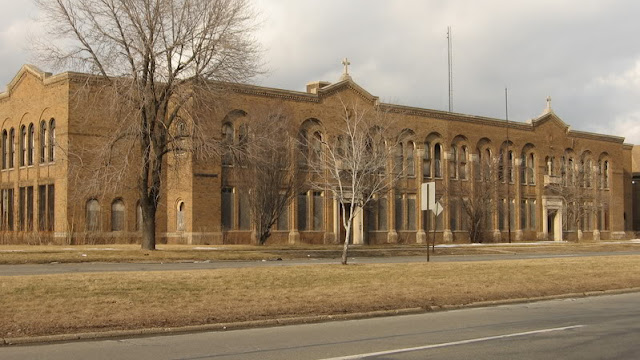 According to a Free Press article from 1924 Detroit was third in the nation in new construction that year, and this area was currently on the city's leading edge at the time. Looking around today it's hard to believe that this neighborhood was once some of the nation's hottest real estate. The article said that the first section of St. David's Parochial School would be completed by August 1924, and also claimed that this area of town would "probably take on the nature of an educational center, as Lasalle College has already purchased a large tract in this vicinity for a college."

The article went on to say that the first portion of the new "Outer Boulevard" to be donated to the city was the section that now runs between Gratiot and Chalmers, passing through what was then the David Trombley farm. They are of course referring to the stretch of what is now Outer Drive that passes in front of this school...so I guess this was the first section of it that was ever built. The address here is 8105 East Outer Drive, although I have also seen 8111 and 8141 used. 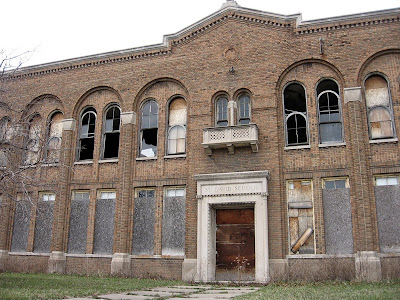 According to local architecture guru Benjamin Gravel, this parish complex was originally designed by Donaldson & Meier. Their firm also designed plenty of other schools and religious buildings in Detroit, such as St. Aloysius Church, First Unitarian Church, Most Holy Redeemer Church, St. Margaret Mary Church & School, as well as the archdiocesan headquarters (the Chancery Building and the Sacred Heart Seminary). They were also the architects of Cooley High School, the Valpey Building, and the David Stott Building. 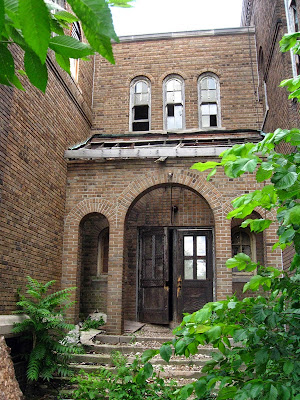 The first pastor of St. David's was Rev. William Murphy, who went on to become the Bishop of Saginaw in 1938, staying there though World War II. Reverend James P. Welsh took over as pastor of St. David's from 1938 onward. St. David's was one of the Detroit Archiocese's "premier" parishes according to the book Catholic Churches of Detroit by author Roman Godzak, "thanks to its highly regarded elementary and high schools." The current church was built in 1948 to replace the smaller original one.


The music section of the December 1941 Free Press proclaimed the "high point" of Christmas programs by Catholic high schools to be the performance of St. David High School's 100-girl choir, who were slated to be singing at the lighting of the ceremonial Christmas tree at City Hall on Christmas Eve. Apparently the St. David's girls' choir was of some renown in those days. 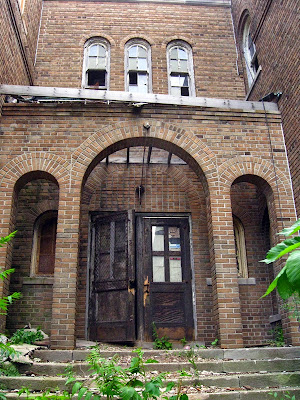 In January 1943, a huge full-page spread of photos in the Detroit Free Press showed students engaged in various activities at St. David's, including learning an art "vital to wartime" in a sewing and clothes-making class. At the time St. David's parish served 2,000 families, with 210 of their children enrolled in the upper four grades while 815 were in the elementary grades. 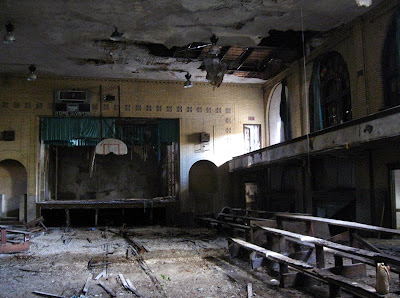 Looking at the Sanborn map of this parish from 1929, it shows this school standing, and connected to the church itself, which stood where the school's gymnasium / auditorium is now....in fact, I'm starting to think that the gym used to actually be the original church, and was converted in 1948 when the new church sanctuary was built...the footprint is exactly the same. I bet they just flattened the roof, changed the flooring, and added some bleachers—voila—a gymnasium: 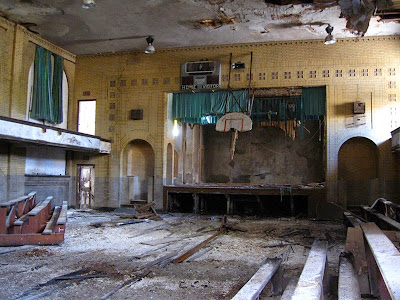 These fancy little arched alcoves were certainly superfluous for a simple gymnasium / auditorium, but they certainly could have had a function inside a church: 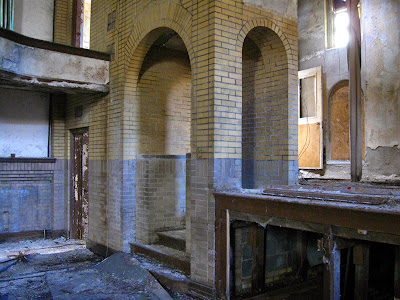 Kenneth Sables, a 12-year-old safety patrol in St. David's seventh grade class, was suddenly a Big Deal across the city for a few weeks in March 1942 after he acted quickly and bravely to save a 5-year-old girl from being ran over by an oncoming motorist when she darted into the street out of turn. The motorist, Mrs. Dowd of 12626 Kilborn St., was the one who reported Kenneth to the authorities so that he could be properly recognized for his heroic move, although he saw nothing extraordinary about the situation. He was awarded the AAA Medal of Bravery, as well as radio station WJR's medal of valor.

Kenneth was a bit shy of all the press attention he received, especially during his literal 15 minutes of fame while being interviewed at the WJR studios the following Saturday morning. He was also pictured on page three of the Detroit Free Press with the medals he received, along with an article about the heroic episode. The Sables lived at 8225 E. Outer Drive, across the street from this school, and Kenneth's father was manager of the Gordon Baking Co. 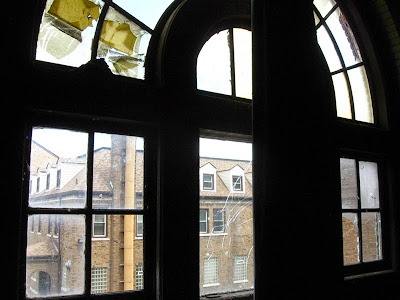 Eerily enough, the Sables family house was also the scene of a freak incident in August of 1961, when an abnormally severe thunderstorm struck the city. St. David student Kathleen Meerschaert of 11721 Rosemary St. was walking down Outer Drive with a friend when the storm hit and they were forced to take shelter under the tree in front of the Sables home when it was struck by lightning, knocking both girls to the ground and stopping Kathleen's heart. She was rushed to surgery at Saratoga Hospital where a heart massage brought her back to life. The old Sables home at 8225 E. Outer Drive still stands, but I'm afraid the tree is a goner. 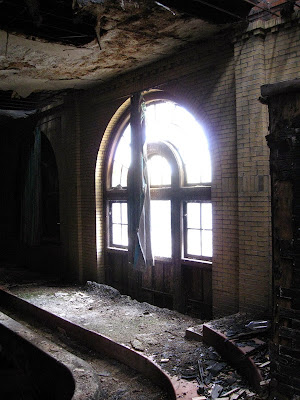 Danny, a forum member at atdetroit.net said that from the 1930s to 1970s this was a largely Italian neighborhood of the Gratiot corridor which he calls "Little Italy," and according to him the makeup of this school reflected that. A famous Italian-owned business, the nearby Better Made Potato Chips factory on Gratiot has been in the Cipriano family for generations, and was built in that era. This parish was also mentioned in the book Italians in Detroit by Armando Delicato, which says that St. David originally built its elementary school so large that it didn't need a separate high school.

St. David's parish "hemorrhaged" members after the '67 Riot, Delicato writes, and the church was sold to a Protestant African-American congregation. One notable alum of St. David's School was Barbara Stanton, an associate editor of the Detroit Free Press in the 1980s, who also shared a Detroit Press Club award for her work in the probe of the 43 people killed during the 1967 Riot. 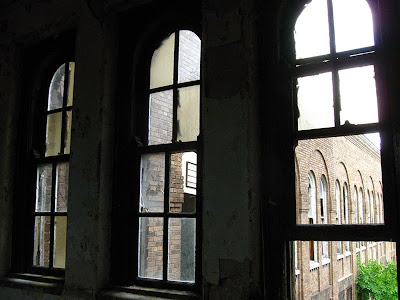 A sports writer also recalled that his class was allowed to watch the 1968 World Series between the Detroit Tigers and the St. Louis Cardinals on the televisions that were in each classroom. Ah, Catholic school...makes me remember why I sometimes enjoyed catechism more than my regular public school time.

In case you didn't notice, I like arched windows. 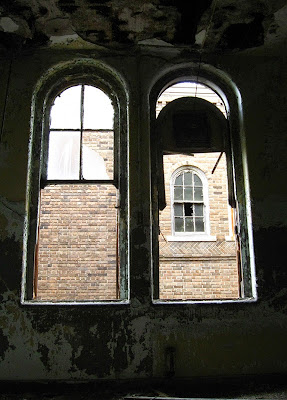 The church wanted to turn a couple of its unused buildings into a drug rehab center in 1988, but many neighbors predictably objected, saying that it was the last thing this struggling area needed for its image, when crime was already on the rise. Rev. Robert Ruedisueli, then pastor of St. David's, tried to allay fears that it would lead to a rise in drug activity in the area like the stereotypes of the old methadone clinics, claiming it was going to be very tightly supervised. Nonetheless the local parents shook their fists, saying that even in prison drugs are easy to get, and with two schools in the area their kids will surely come into contact with them if a rehab center was opened here.

Rev. Ruedisueli made the trenchant observation that the drugs "already flood the neighborhood," perhaps to send a wake-up call to these parents. He said drug sales had been going on outside the rectory all summer, and a house had just been raided two doors down. He said the new center would be for addicts who had been clean for six months to two years. Thaddeus Westbrooks, president of the Outer Drive-Chandler Park Neighborhood Association worried about a fall in property values, puffing, "Our area is not a down area. Outer Drive is not ghetto-ized." He claimed that while such rehab centers are needed, he wouldn't want it across the street from him, and that "they need to...put them up in the boonies." 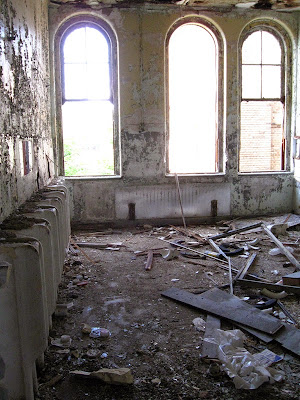 The archdiocese considered implementing a new "tax" in spring of 1990 that would generate $750,000 per year for maintaining and repairing aging buildings. Even back then, $750k wouldn't buy much maintenance for a building of this size.

From 1970 to 1990, the St. David congregation shrank from about 2,000 households to 110. "This doesn't surprise me," said Assistant Wayne County Prosecutor Michael Callahan, who was pastor of St. David's from 1969-1971. He opined that the area's Catholic population was rooted mostly in Polish and other ethnic groups who migrated up the Gratiot corridor to the northeastern suburbs like Roseville, Eastpointe, Harper Woods, and Fraser. 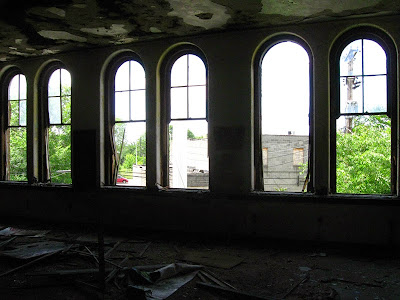 Part of the declining enrollment in Catholic schools was the rising cost, apathy among parents, and migration of Catholics away from older parishes to newer ones in the suburbs that didn't have schools. 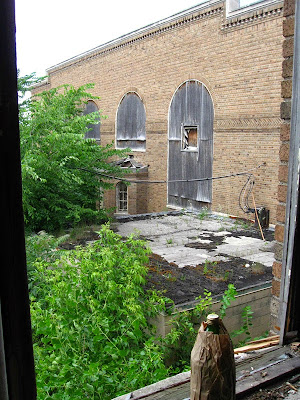 The St. David School and church were both closed by June of 1990 when the Archdiocese of Detroit was going through its cataclysmic downsizing. Today the church building itself seems to still be used by the "Community Christian Fellowship." 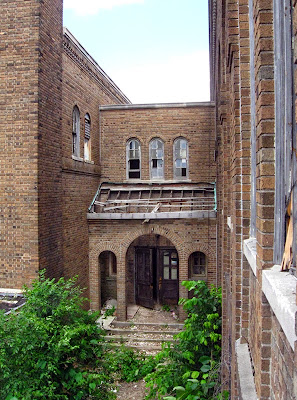