Spare a Cup of Sugar, Neighbor?

Down in the doldrums south of Fort Street in the gloomy Delray area of Detroit, several nondescript old industrial structures remain standing, gaunt survivors of the apparent apocalypse that long ago turned this part of town into a no-man's land. One of them is this small warehouse, "Edgar's Sugar House No. 5"—not to be confused with the new hoity-toity "Sugar House" cocktail bar in Corktown. If I'm not mistaken, this building stands right on the very edge of the development area for the new bridge to Canada, so there is a chance that it and several of the other surviving structures will be demolished when the toll plaza is built. 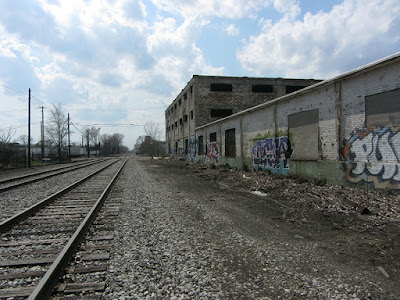 I figured even though it was rather plain looking, this would be a good one to check out before the new bridge brings its sweeping changes to this area. It had always remained tightly sealed up during the several years that I had frequented this area when I worked at Historic Fort Wayne nearby, and I thought it might've still been in use for something until recently. 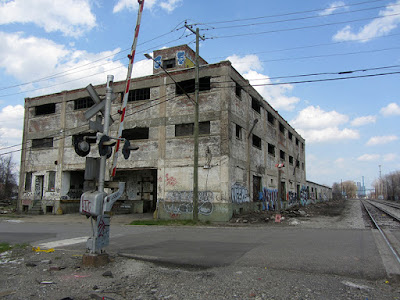 So far I haven't been able to pinpoint when this structure was built, but it shows up on the c.1923 Sanborn map, and not the c.1910 map; my best guess is early '20s. Immediately to the east of it used to be Edgar's Sugar House No. 9, and adjacent were some automobile storage sheds.

Across the street was once U.S. Radiator Corp.'s foundry, and on the south side of the Wabash / Pere Marquette RR tracks there used to be the H.F. Hurd Lumber Co., and the Stuart Foundry Co., as well as the McRae & Roberts Co. foundry and machine shops. During that time period, Edgar's Sugar House was controlled by a man named Clinton Goodloe Edgar. 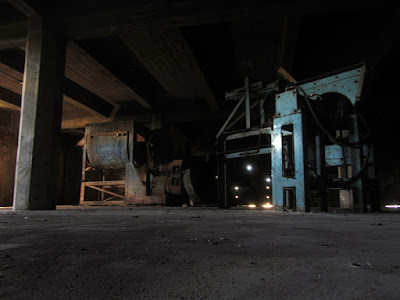 Brigadier General Clinton Goodloe Edgar was Michigan's most prominent figure in the sugar industry according to an article on the front page of the Detroit Free Press upon his death in 1932. His grandfather William H. Edgar established the family business when he sold his wholesale business in Kalamazoo and invested the proceeds into general merchandise, which he shipped by boat to Houghton, Michigan. Unfortunately his first shipment burned at the wharf in Houghton along with the boat, and Edgar was left penniless.

In 1860 he came to Detroit and contracted under wholesale grocer Moses W. Field until he was able to secure $1,000 and the use of one of Field's stores near Woodward & Jefferson. Edgar used the cash to buy the Booth & Edgar sugar refinery from his brother James A. Edgar, and William and his son James went into sugar merchandising in 1867. This is what eventually grew into W.H. Edgar & Son, Inc., popularly known as "Edgar's Sugar House," producing sugars, syrups, molasses, and glucose. 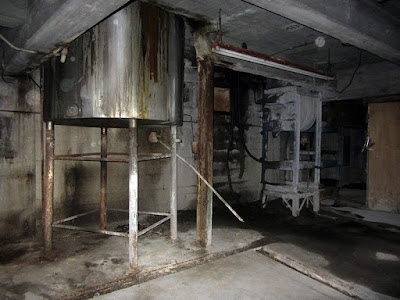 According to one website, Edgar's Sugar House supplied most of the breweries and confectioners in Detroit with their sugar needs. So I'm guessing that means Stroh's, Sander's, Morley, Pfeiffer, Goebel, Awrey, maybe even Faygo and Vernor's back in the day. Everyone knows those names, but even I had never heard of Edgar's Sugar House before.

As a matter of fact, it was Mr. Edgar's father who loaned Fred Sanders a barrel of sugar when he first set up his now-immortal candy business, as told in this story about Sanders from the Detroit Free Press in May 1931, entitled, "This Detroit Pioneer Became the World's Largest Exclusively Retail Candy Manufacturer"...

If you recall from a few years ago, I wrote a post about exploring the old abandoned Sanders Confectionery Plant on Oakman Avenue.

Detroit historian Clarence M. Burton wrote that the Edgars were "one of Detroit's oldest families," who could trace their lineage back to the Laird of Keithock in Scotland in the 1680s. Clinton Goodloe Edgar was president of Edgar's Sugar House at the time this place was built, and lived at 866 Iroquois in the prestigious Indian Village neighborhood when he died (I have also seen 1020 Iroquois listed as his home). 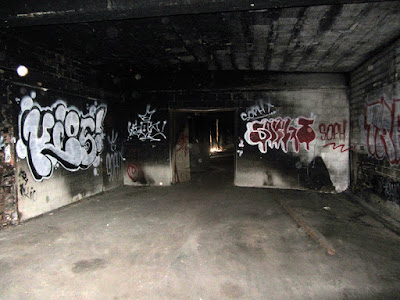 Mr. Edgar also was involved at various times as the president of the First National Bank Building, president of Wolverine Underwriters' Agency, and director of the Wabash Railway Co. Born in Detroit in 1873, he graduated from Cornell with a chemical engineering degree in 1897, and got his start as a chemist at the Detroit Gas Works before joining his father's sugar business as a labor foreman.

He also became a stockholder in the Continental Sugar Company of Cleveland, in which he acquired a large block of the company’s stock in 1914 and became its president. Continental owned a beet sugar factory in Blissfield, Michigan in addition to one in Findley, Ohio and another in Fremont, Ohio. In 1926, Continental purchased the Holland-St. Louis Sugar Company, according to beetsugarhistory.blogspot.com. 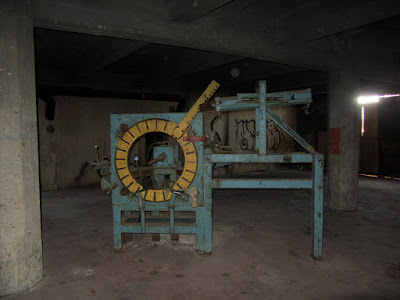 Mr. Edgar had a distinguished career as a soldier besides his activities as a capitalist. When WWI broke out he was a captain in the Quartermaster Corps Reserve, and was chosen as the man with the expertise to solve the Army's issue of speedily constructing enough airfields of sufficient size to train new pilots and conduct airplane maintenance, and finding enough suitable land for the task. He received the Distinguished Service Medal for these accomplishments in 1923, which included supervising Air Service transportation. It seems likely that he was stationed at Detroit's Fort Wayne during this time (which I think may have been where the Army Quartermaster's Corps was headquartered at that time), which may have played a part in his decision to locate this building in Delray, mere blocks from the old fort. 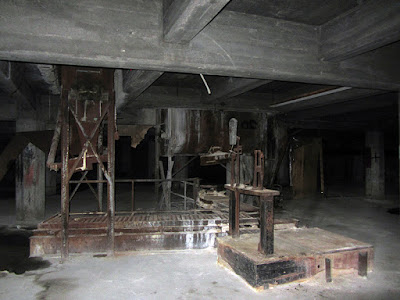 As a member of Detroit's high society, Mr. Edgar boasted memberships in several fraternities such as the Detroit Athletic Club, Detroit Boat Club, Detroit Aviation Society, the Detroit Club, and the Society of Arts & Crafts. His art collection was bequeathed to the Detroit Institute of Arts, under covenant that it was to be displayed but never sold. Mr. A.W. Beebe, not Edgar's son, succeeded him as president of the company.

Now this piece of equipment I definitely recognized as a bulk dry goods scale (seen above and below). I've seen older versions of this same type of scale in other places like grain elevators out in the farm country: 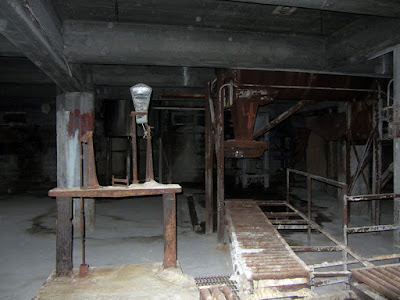 Michigan has been in the sugar business for well over a century, with many farms producing beet sugar in the Saginaw Bay area. Farming sugar beets here was first attempted in the 1830s, but it wasn't until the Lower Peninsula's timberlands were cleared in the 1880s that Michigan sugar beet farming really opened up, according to this quote from a Michigan State University webpage:

Although in recent decades the state was only ranked 5th in the nation for sugar production, we are the only region growing sugar beets outside of the arrid West, where irrigation is essential. 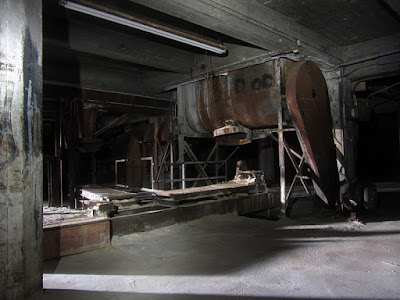 I have found references to several other facilities owned by Edgar's Sugar House. These photos from the 1908 American Sugar Industry and Beet Sugar Gazette show their new plant at Lafayette and the Michigan Central Railroad main line, which were lowered to go under the building at that point (see next photo). The article stressed the great measures that had to be taken to waterproof the building, due to the "great damage" to sugar that is caused by even slight dampness.

Warehouse No. 3 was at Howard & 12th Street in 1915, there was another at Clay & Dequindre in 1918, another along the Dequindre Cut at Alfred Street, one at 1939 Division Street in 1935, and one at 14th & Bagley (which burned in 1949). There is another nice historic photo at detroitpubliclibrary.org showing four Sampson trucks owned by Edgar's Sugar House, and their drivers, parked in front of one of the plants. I have read that a certain bend in the train tracks at Milwaukee Junction was known as "Sugar House Curve" to railroad men because of the Edgar's warehouse at Clay Street.

A two-alarm fire on October 11, 1937 swept part of the Edgar's Sugar House No. 9 adjacent to this building, which was then occupied by the Wolverine Gum plant. The firefighters' hour-long battle snarled traffic and was "seen by thousands," although from experience I'd say it's probably always been pretty easy for traffic to get snarled up in Delray, given all the narrow streets and spiderweb of unavoidable railroad crossings—back when there was traffic in Delray. 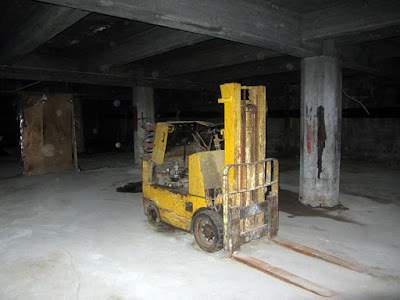 In combing old issues of the Detroit Free Press, I found several ads in the 1920s and '30s for auctions of unclaimed freight that were held at Edgar's Sugar House, 115 Junction Avenue. Apparently all of the unclaimed freight from the Michigan Central, Grand Trunk, Pere Marquette, and New York Central Railroads was piled up there and sold off every month or so. 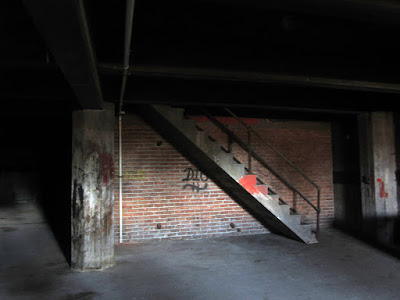 It would appear that somebody was into heavy metal...Dio, Iron Maiden, AC/DC, and Def Leppard tags were spray painted all over one corner of the basement. Also, Phil loves Mandy, in case you care. 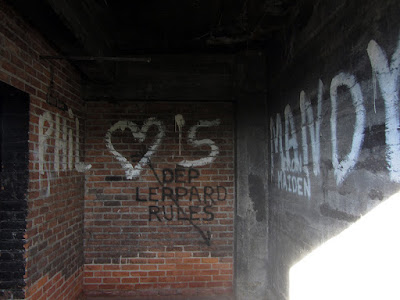 This strange auger was actually in the floor of the 1st floor of the building, right outside a door...I imagine it was for moving sugar into holding vats, although maybe it was a trapdoor that was used to dispose of recalcitrant employees or rival sugar barons: 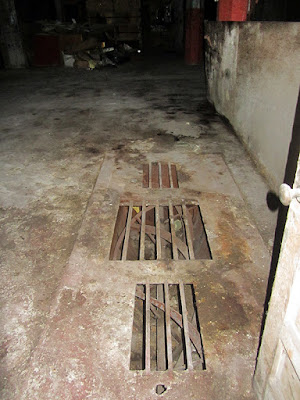 According to one book there seems to have been an experimental collaboration between Mr. James Edgar and Henry Ford in developing soybean products. In 1936 it indicates that Edgar Soya Products Ltd. was formed to produce soybean oil, soybean meal, and soybean flour, and constructed a new mill at Belle River, Ontario. In case you didn't know, Henry Ford was nearly obsessed with soybeans and their potential uses. The mill would house two Ford solvent extractors built by Ford Motor Company. 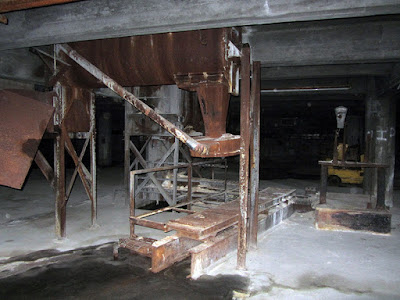 I'm sure that Navi, one of my Canadian friends who hails from Belle River would find this to be a fascinating connection to his hometown especially since he is a Delray afficionado, but I know he would absolutely go bonkers to learn that Mr. Ford and Mr. Edgar also collaborated on designing a 54-acre skatepark in this area as well, but due to the onset of the Great Depression those plans were kiboshed, sadly. Too bad for you, Navi. At least now you don't have to shovel 54 acres of snow on your Christmas visit. 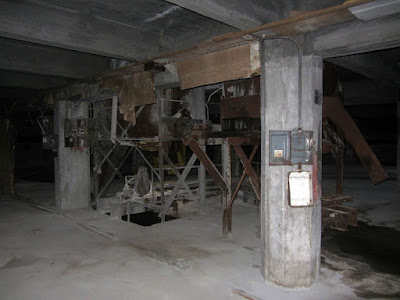 On this wall some employees had fun pasting all kinds of girly photos to the wall, possibly using molasses as glue: 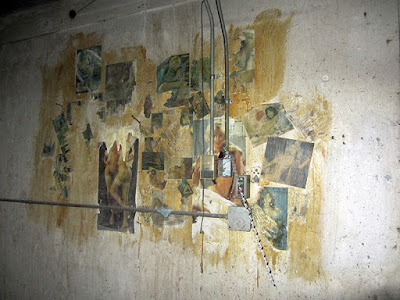 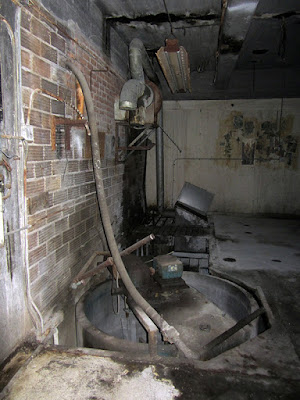 An article from 1960 entitled, "Three Live 'Oldies' Defy Merger Era" celebrated the company's 100th anniversary. It was apparently a "big deal" too, as the article boasted that its "ramifications" extended from New York to Chicago, in at least six major cities. In an age when smaller local family-run companies were being rapidly gobbled up and snowballed into larger national corporations, it was unusual for a business like Edgar's to continue thriving independently.

Another company mentioned in the article was also celebrating its 90th anniversary, Koenig Coal & Supply, which I explored in an older post. For what it's worth, the Polk Co., makers of the R.L. Polk's city directories that researchers such as myself so often rely on was listed as the third venerable Detroit-based company in the article. 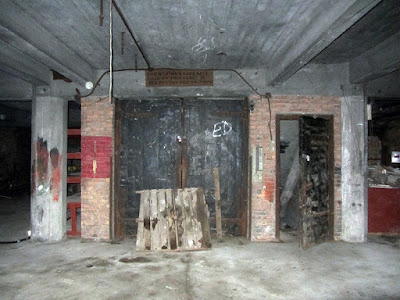 By that time (1960), William D. Byron, great great grandson of the founder was president of the company, which had split into two branches: W.H. Edgar & Sons, Inc., and Edgar's Warehouses, Inc., with a total of 300 employees which operated public warehouses from Fort Wayne, Indiana to Passaic, New Jersey. 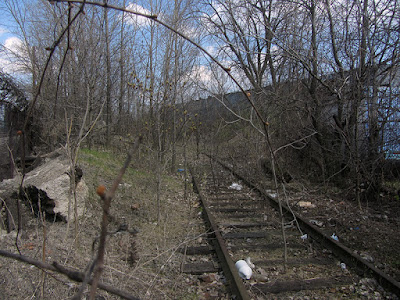 Although I have not come across anything yet telling me when Edgar's enterprises went out of business, I am pretty sure they aren't around anymore. 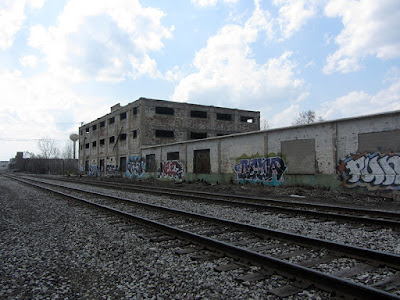