We Look To Better Things

The City of Detroit announced in late 2011 that four neighborhood library branches would be closing permanently as a result of budget cuts, just two years before it was forced into "bankruptcy." Two of them were historic and architecturally significant, so I decided to go hang out there a bit and get some photos before they were destroyed. One was the Gabriel Richard Branch Library, and the other was the Monteith Branch Library. 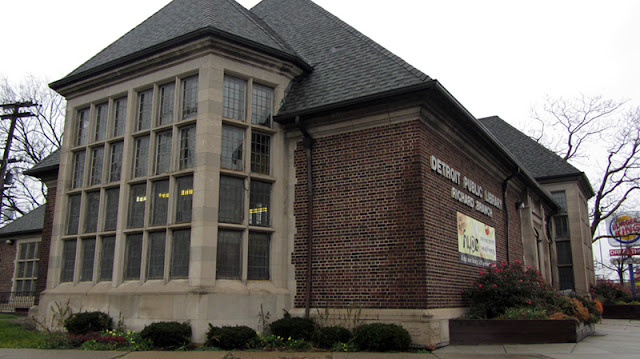 This is the Gabriel Richard Branch, at 9876 Grand River Avenue. It made a great place to get some work done on my writing projects. As a lifelong bibliophile, I can scarcely form into words how angry and sad it made me that these libraries were closing, but by 2011 I was reaching middle age and was pretty much resigned to the realities occurring in this region; it had been a long time since anything had shocked me. I was just content for the moment to sit and enjoy them while they were still around. This library will be 100 years old if it manages to stick around until 2023. Hopefully the current trend toward improving old buildings in Detroit will continue long enough to reach places like this, way outside the Midtown™ bubble...but the with the way trickle-down Dugganomics seem to be working, it's not looking good for the libraries or neighborhoods. 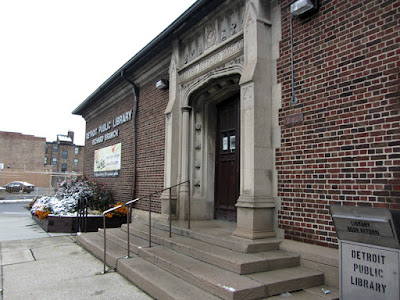 It opened in February of 1923 and was designed by one of my favorite Detroit architects, Marcus R. Burrowes, and his partner Frank Eurich, Jr. They designed three other libraries for the Detroit Public Library (DPL) system as well—the Parkman Branch, the Redford Branch, the Duffield Branch—and they also had a hand in the design of the McGregor Library in Highland Park. You may recall I wrote about exploring Marcus Burrowes' vacant former house in an older post. 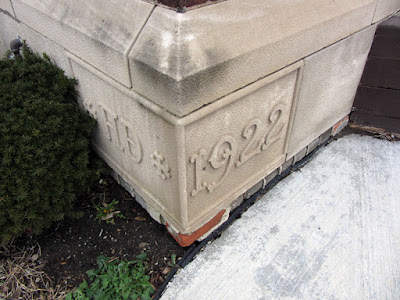 The public library system in Detroit dates back to 1865, but it was pretty limited until 1910 when it received a grant of $750,000 from the Carnegie Foundation to fund the proliferation of libraries. Half of the grant was earmarked to build the Main Branch Library on Woodward downtown, while the other half was to be used for constructing eight branch libraries: the Bowen, Conely, Duffield, Ginsburg, Butzel, Lothrop, Osius, and Utley branches. Only the first four of those remain in use as libraries today; the Butzel, Lothrop, Osius branches have been demolished, and the Utley remains in use as a family center. 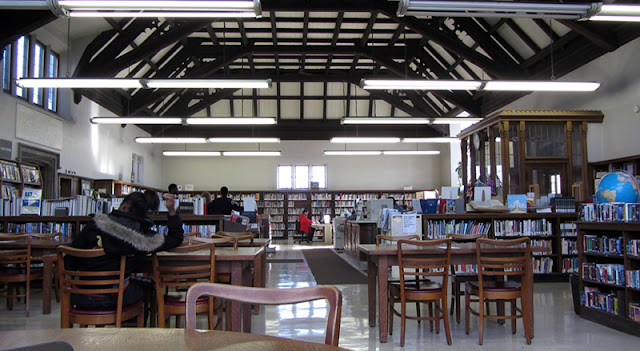 The speech given at the opening ceremony of this library on April 23, 1923 told the story of its namesake, Father Gabriel Richard, one of the greatest forefathers that Detroit or Michigan ever had. Some say he was the "second founder" of Detroit. He was not some great rich white landowner like most of America's celebrated historic figures, but a humble servant of the people. As a matter of fact, historian Clarence Burton wrote that the first suggestion for establishing a public library in Detroit was at the behest of Fr. Gabriel Richard in 1808, when he was serving as a priest at Sainte Anne's Church.

A member of the Sulpician Order sent from France, Fr. Richard narrowly escaped le guillotine during the French Revolution (probably on account of the long lines), and came to the United States in 1792. He arrived in Detroit in 1798 to replace the aging Fr. Levadoux as the pastor of Ste. Anne's Church (just before the church and the city were to celebrate their 100th birthday). Despite being a Catholic, Fr. Richard ministered to all Detroiters, including protestants and native tribesmen. 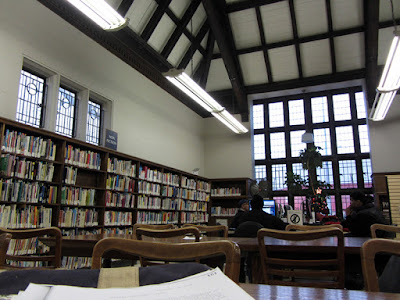 Fr. Richard was a writer, orator, composer of music, a mathematician, and a teacher of teachers; teachers who then went forth into the region to spread education. He brought the first printing press to the Northwest Territory in 1809, and founded the first newspaper west of the Alleghenies, Essai du Michigan, or The Impartial Observer. Then he began printing textbooks for educating the children of the frontier. It was Fr. Richard who first proposed that a free public school system be established in Michigan. He established a school at the Spring Hill farm, where he taught Native American and white children together, "to break down racial barriers." It stood very near to where the army later built Fort Wayne on the Detroit River.

After the Fire of 1805 that destroyed the city, he was the one who coined Detroit's famous motto as he rallied the people for the rebuilding process: “Speramus Meliora; Resurget Cineribus / We hope for better things; it will rise from the ashes.” 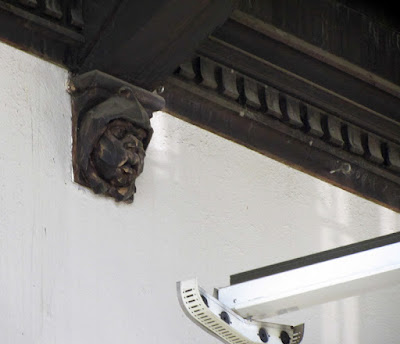 Even though he escaped the guillotine back home in France, Fr. Richard was imprisoned in Canada when Detroit was captured by the British in the War of 1812. After the war, along with Rev. John Monteith and Judge Woodward he founded the University of Michigan in 1817, which they called the Catholepistemiad.

Reverend Monteith (namesake of the other library that was closing, ironically) was a contemporary of Fr. Richard—his Presbyterian counterpart, in effect. Both came to Michigan as religious missionaries and educators, and both went down in Detroit history as great men of the early years. Guess what, my next post will be about the Monteith Branch Library, and will focus on him. 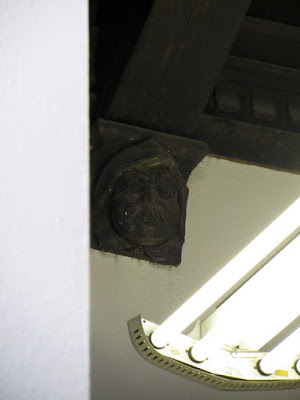 Anyway, in 1823 Fr. Richard was elected to be the third delegate sent to U.S. Congress from the Michigan Territory. He authored legislation in Washington D.C. to provide for improvements to the territory such as building the military plank road that became Grand River Avenue—the same road that this library is situated upon today. He was also responsible for promoting the construction of the Chicago Road (Michigan Avenue / US-12), and in fact it was his legislation that served as the genesis of Michigan's highway system.

There are many things that have been named after Father Richard, such as the Hubbard-Richard neighborhood where Ste. Anne's is located, at least four schools in the Metro-Detroit region, a church on the University of Michigan Dearborn campus (located on Monteith Boulevard), a mural in the old Greyhound bus terminal, and Gabriel Richard Park near the Belle Isle Bridge, where there is also a statue of him. 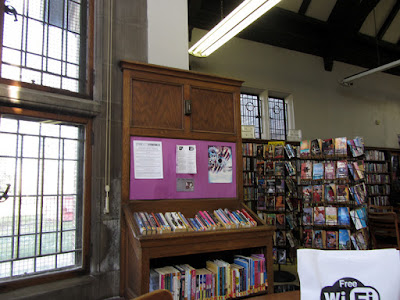 By the way, in case you've been saying it wrong all these years, his last name is pronounced "Ree-SHARD," the French way of course.

This marble tablet was placed by the Knights of Columbus, and commemorates his accomplishments: 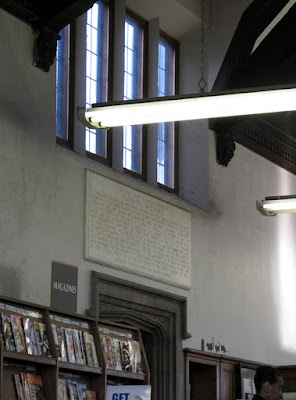 Fr. Richard died in 1832 while he was tending to the victims of the cholera epidemic that overran the city, and digging graves for them. Big surprise, he managed to catch the disease himself. His funeral mass was said by Father Baraga, another missionary priest known for his work in the Upper Peninsula. He lies interred in his sarcophagus at Ste. Anne's to this day, which you can go see in the chapel behind the altar. It's kinda crazy to see.

Anyway, when he died his personal book collection became part of, I believe, Detroit's first library; although the DPL system did not officially come about until 1865, the City Library Society of Detroit was incorporated in 1817 by the same act that began the Catholepistemiad. Today Fr. Richard's personal collection has been divided up amongst the Cardinal Szoka Library of the Sacred Heart Seminary out in the suburb of Plymouth, the University of Michigan in Ann Arbor, the Archdiocese of Detroit, and the Detroit Public Library's Burton Collection. 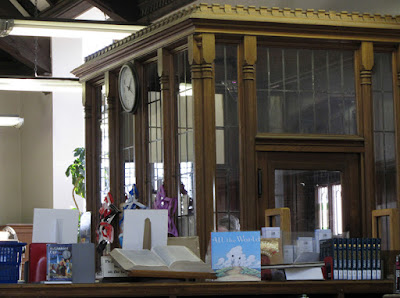 When I heard that the DPL was thinking about closing this library, I began hanging out there to do my reading and studying work, even though it was not in my immediate area. Normally the branch libraries I use are the Bowen, Duffield, and Conely, since they are closest to the places I have lived or worked (when I need to do serious research I go downtown). 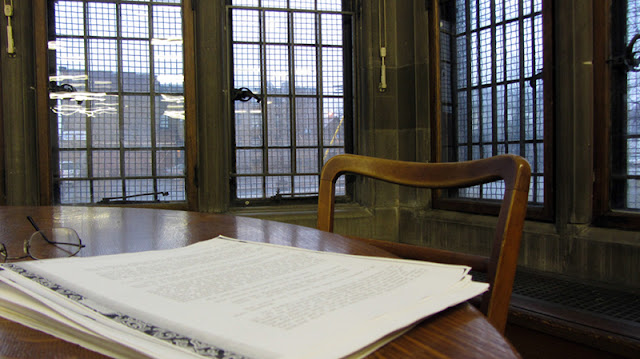 So for that one winter I made an effort to spend as much time at the Richard Branch as possible before it closed, knowing that it would probably one day be scrapped and demolished like the Mark Twain and Lothrop Branches. I always sat under the huge bay of leaded glass windows. About 2pm every day, the sun spilled in and made the spot a very nice place to sit and soak in much-needed wintertime warmth. 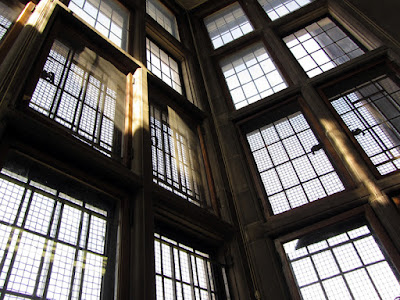 Though I realized quickly that this large bank of windows was designed before computers, or computer screens—or any screens for that matter—and certainly before the advent of the matte-finished anti-glare screen. I hate the glossy screen on my current computer. If I wanted to look at a reflection of myself while I am typing, I would have mounted a rearview mirror on my laptop lid.

Anyway, when this building was built, it was for book reading only, hence the big sunny windows...there is nothing better than reading a good book in a nice warm sunbeam. (Unless maybe it's hiding under the covers and sneaking in some reading after your bedtime). 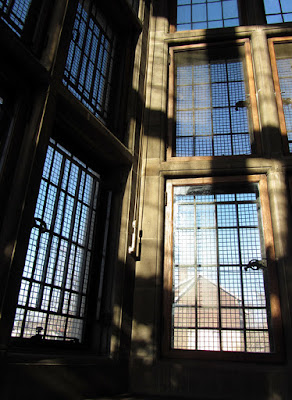 After dark, when the cold wind picked up, I could hear the myriad little rectangular plates of glass quaintly clicking and rattling in their places with each stiff breeze, and the creaking of the wooden roof as it flexed like the hull of an old sailing ship. This building was showing its age, but still in outstanding shape overall. It's got a very nice new roof on it too. If I were rich I would not hesitate to buy it from the city just to keep it open. 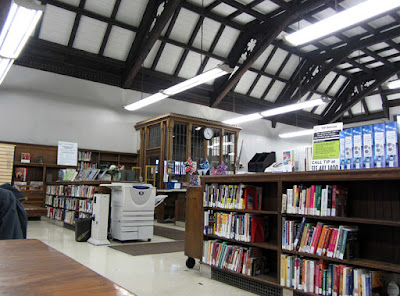 There was an article at americanlibrariesmagazine.org looking at whether the recent phenomenon of the "little free libraries" that have been popping up next to bus stops all over Detroit and other cities has been having an effect on peoples' usage of public libraries. It also said that when the Gabriel Richard Library closed in 2011, some local 4th graders installed a colorfully painted bookcase in front of the defunct building to serve as a surrogate library. Isn't that just the saddest damned thing you ever heard of?

Minutes from the Detroit Library Commission Proceedings for November of 2018 indicate that they are currently looking to market the Gabriel Richard Branch for sale through a real estate broker. 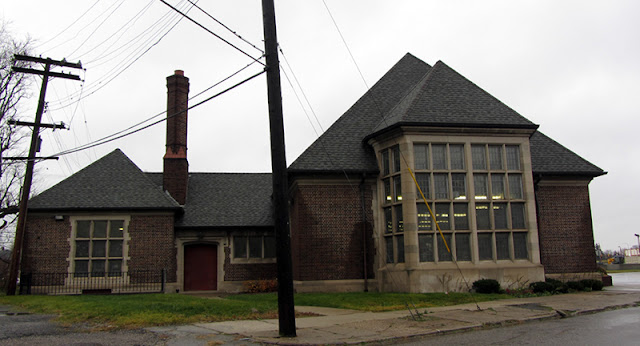