Oceana County was set off from part of Ottawa County in 1831, its government was organized in 1855. Author David M. Brown believes the name most likely comes from The Commonwealth of Oceana, a treatise published in 1656 by English political theorist James Harrington, rather than its picturesque location on the shore of Lake Michigan. Harrington's work was a "blueprint for a utopian republic," according to Brown. Natives from ceded tribal territory near Grand Rapids migrated to this area in 1857 and began a maple sugaring industry which lasted until the 1880s. Oceana has a current population around 26,000, it is a top producer of tart cherries, and is hailed as the "Asparagus Capitol of the World." 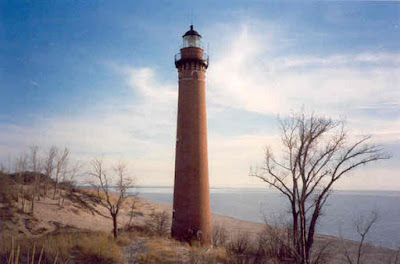 One prominent ruin in Oceana County was the Little Sable Point Lighthouse, in the dunes of Silver Lake State Park near the lake port city of Pentwater. I visited in 2004 (which explains why the photos are so low-resolution). Unfortunately even back in 2004 the tower entrance was chained up good, so I was not able to see inside: 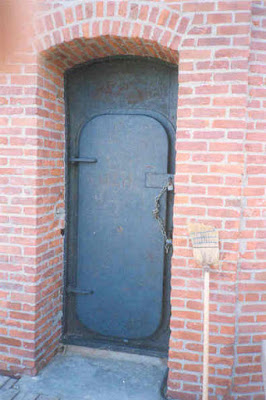 Built in 1872, the light station was mostly demolished in the 1950s and sat unmanned since then. One year after my visit, the DNR handed its care over to the Sable Points Lighthouse Keepers Association, so it is no longer abandoned. In fact it is now open to the public every day in the summer, from 10:00am to 5:00pm...but I haven't had the chance to get back. 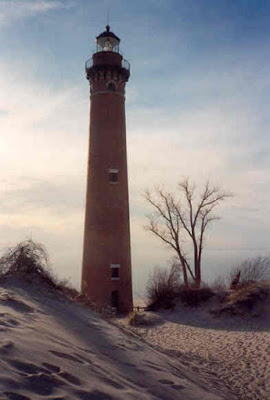 I have traveled through this county many times in my other travels, but this time I was going to try and seek out a handful of more obscure sites, so I skipped a return trip to Pentwater. 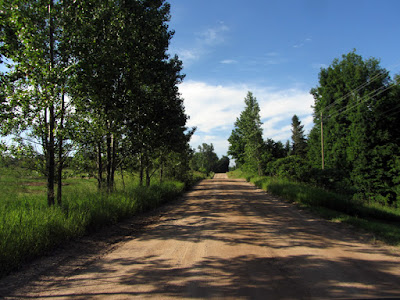 Among other ruins in Oceana County that I could have investigated were those of the Marshville Dam, and of the kilns of the Spring Lake Iron Co., in the town of New Era. I didn't make it to New Era, but I did find a nice quiet resting place at Marshville. 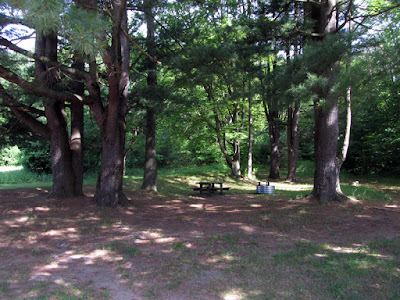 I didn't see anything suggesting that the town of Marshville still existed in this lush wooded area, but there is a nice roadside park right next to the ruins of the town's dam. Just when I needed to get out of the truck and stretch! 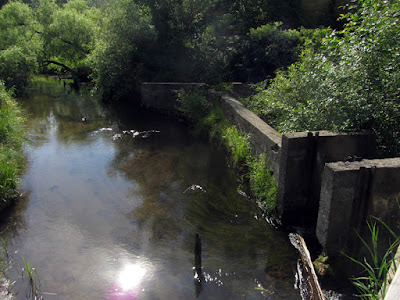 I'm not sure which came first, the village or the marsh, but Marshville started when Henry Marsh built a sawmill here on Stony Creek in 1862 (most likely including a dam), and followed it up with a gristmill a year later. 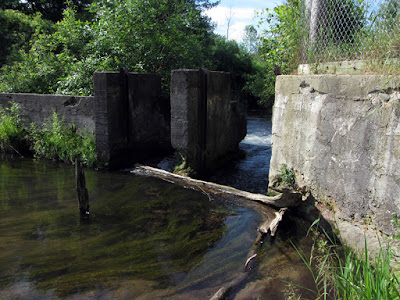 This is the marsh that was created by the impoundment of the dam (I presume): 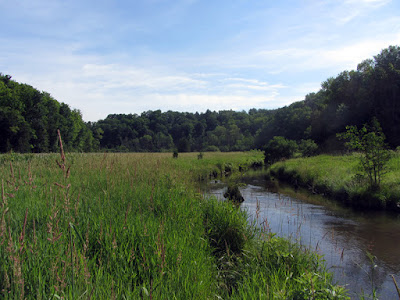 A view from behind: 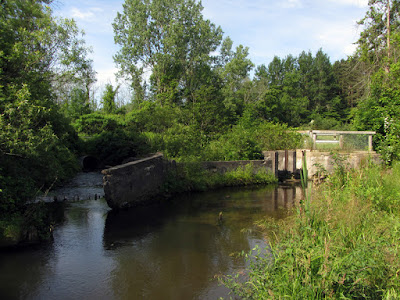 Marshville's post office closed in 1901, signaling the town's decline like so many other rural Michigan hamlets that once dotted the countryside before automobiles and highways made them obsolete. 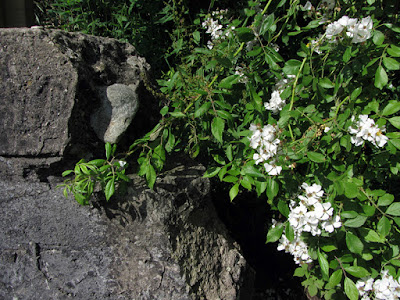 This whole area was so desolate that during the entire 20 minutes I sat here, not one single other car passed by on the road. It is very peaceful and very beautiful in Marshville. 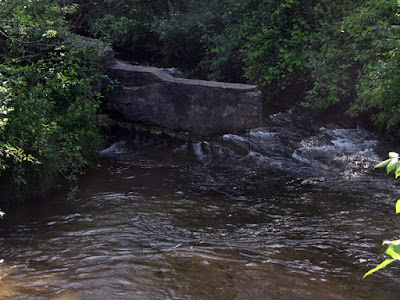 I continued cruising the backroads of Oceana, flying over hills and through old cherry orchards. Next, I was looking for a certain obscure relic of the Cold War. 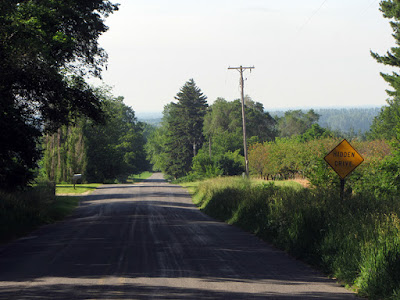 First a little background. Three major radar lines were set up under NORAD to defend North America against any approaching Soviet missile attacks across the North Pole. They were the DEW Line, the Mid-Canada Line, and the Pinetree Line... 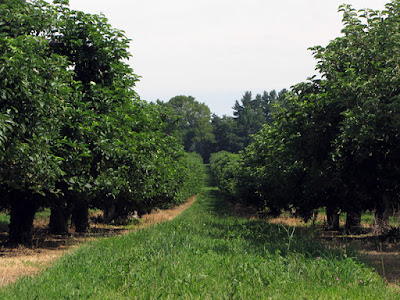 Then there were a few "gap-filler" radar sites, like the one in the small town of Shelby, Michigan that sat below the Pinetree Line to fill in weaker areas of the net. The "gap-fillers" were unmanned radar stations, but there were Air Force technicians whose job it was to rove around the state checking on each one regularly, refueling their generators, or responding to equipment fault signals. 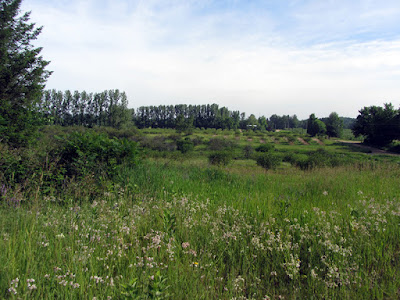 The former Shelby "gap-filler" radar was reduced to ruins, but it was still out there and I thought it might make an interesting find. I finally realized that it lay along an extremely inconspicuous unmarked path leading between two cherry orchards: 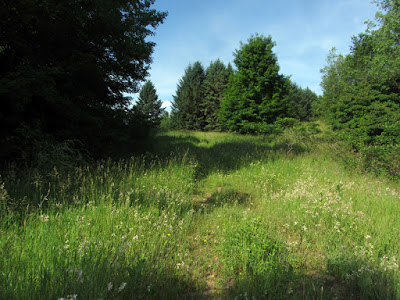 It really couldn't be more hidden in plain sight. As the trail ended a clearing opened up, with a pile of ruins in the middle, trees growing out of it: 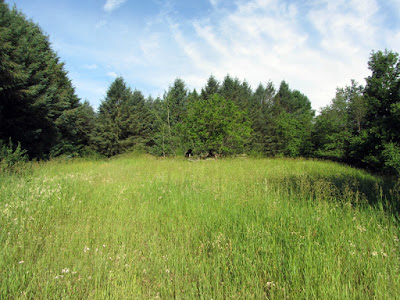 According to fortwiki.com, this rubble heap's full military identifier is "Empire AFS Radar Gap-Filler Site Z-34B." It was part of the Empire Air Force Station, not far from the Sleeping Bear Dunes. Empire AFS was responsible for the maintenance of three other remote unattended gap-filler radar sites at Petoskey, Alpena, and Saugatuck. This one at Shelby was built in 1958, and they were all equipped with short range search radars and coordinate data transmitters that sent digitized radar target data to a SAGE direction center and to the main radar site at Empire. Both the radar set and the data transmitters were dual channel to reduce downtime, and certain functions could be performed remotely such as channel changes, and operation of the diesel generators that powered the radar. 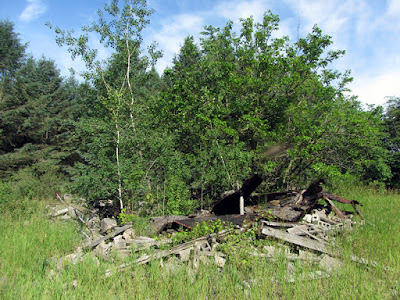 A recent article in Michigan History Magazine recounts a rather interesting day in the history of this particular radar station during the height of the Cold War. USAF radar tech Don Chaffin was assigned to monitor this one in Shelby, along with other stations. On Monday, October 22nd, 1962 he was on his way to Shelby to do his routine checks, and as usual when he arrived he got to a telephone and checked in with his superiors at Custer Air Force Base in Battle Creek. 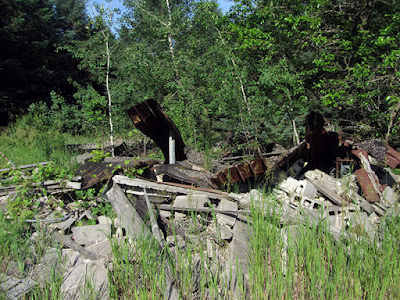 Now, you may remember October 22nd, 1962 as the day the Cuban Missile Crisis unfolded. But since Chaffin was driving long-distance in a remote area in the days before mobile communication, he had no idea about what was transpiring in the news until he made that phone call. Since he was on an unsecure line, his commanding officer could not tell him any details, so they simply informed the unwitting airman that the military had gone to DEFCON-3, and ordered him to "obtain weapons and guard the Shelby station until relieved." Naturally this was quite an unexpected shock, but he did as ordered and acquired a weapon with which to guard his radar post out in the cherry fields. I imagine this meant commandeering a local farmer's shotgun. 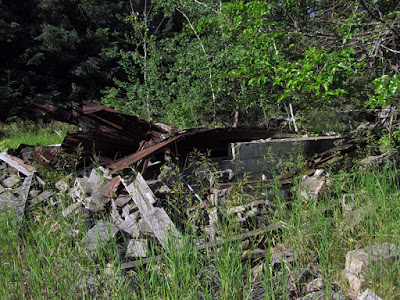 Chaffin stayed on guard as ordered, probably with all kinds of thoughts in his head about how the world might be about to end in nuclear holocaust, or how foreign saboteurs might be creeping through the orchards to ambush him and hijack his radar station in order to mask an approaching squadron of Russian bombers sent to annihilate Detroit. DEFCON-3 meant that the Air Force was ready to deploy in 15 minutes; this was the highest alert that the United States had ever been under. B-52 bombers at Michigan's three Air Force bases were fueled and armed, ready to fly over the North Pole to drop nukes on Russian targets. 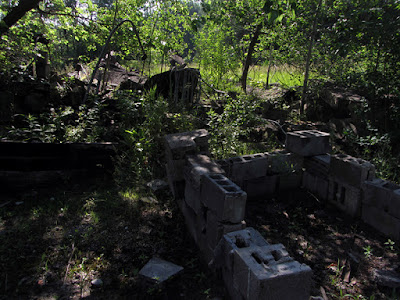 They might have forgot about the poor guy for a bit, but at the end of two days of sitting in this radar station without hearing any news reports, Chaffin was again telephoned by his superiors and informed that the military had now moved up to DEFCON-2, which meant that we were only one step away from full-scale armageddon. Fortunately Chaffin was relieved of duty soon afterward by a detachment of other radar techs sent from Custer, and he finally learned what was going on in Cuba. Of course President Kennedy was able to defuse the situation, but the crisis was a striking illustration of what can happen when two paranoid nations with the power to destroy the planet get itchy trigger fingers. 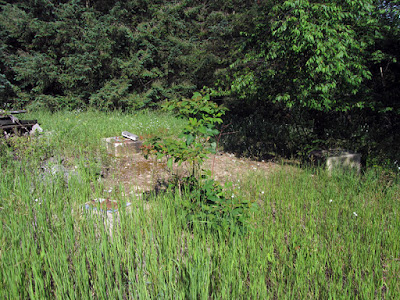 Here are the concrete footings to the radar tower itself, which has been removed. 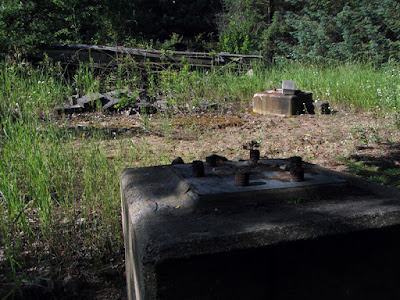 Also of related interest, during World War II there was a Nazi POW camp here in Shelby that housed Germans captured in Europe. I explored another such camp in Raco, in an older post. 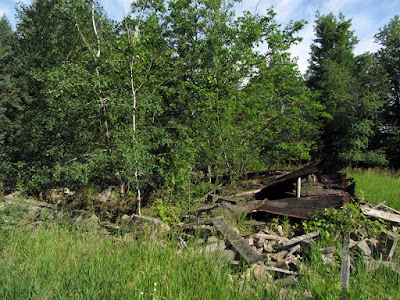 Next, I went in search of the remnants of the first white settlement in Oceana County, known as "Clay Bank," or "Claybanks." Located where the Flower Creek (Whiskey Creek?) empties into Lake Michigan, 360-foot high clay-loam banks rear up near the lakeshore giving the hamlet its name when it was founded in 1849. 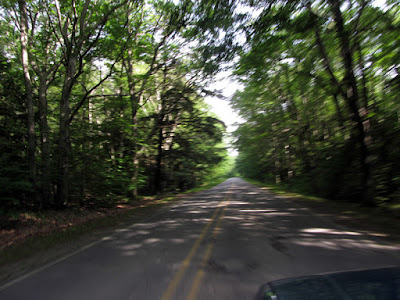 When I passed through the area however, all the areas along the shoreline in the vicinity of where Claybanks would have been were marked as private property, much to my agitation. Finally, I noticed an unmarked stub of W. Park Road that went past B-15 and apparently down toward the shore. I followed it between a couple houses, and was greeted by these signs, and a path to the lake: 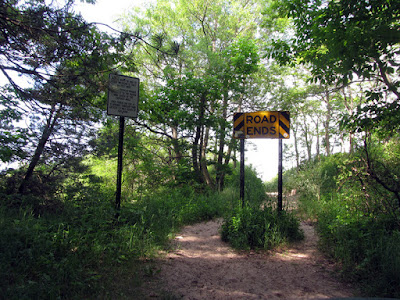 
"Public Right of Way to Lake Michigan is Only 66 Feet Wide. Please Respect Private Property to the North and South of the Defined Area"

...and then went on to note that there was a township park nearby with a free public beach, but that was too far from the area I needed to be in, and it too had a sign saying it was for township residents only. 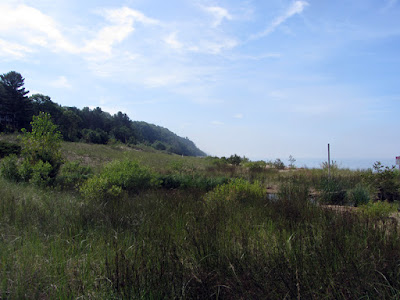 Claybanks had a population of 36 by the mid-1850s, and by 1870 it had had a bowl factory, sawmill, and a doctor. Like Marshville, the Claybanks post office closed in 1901. It was described as a ghost town in the 1980s by David M. Brown, but aerial images today seem to show that there are lakefront houses covering the site now. 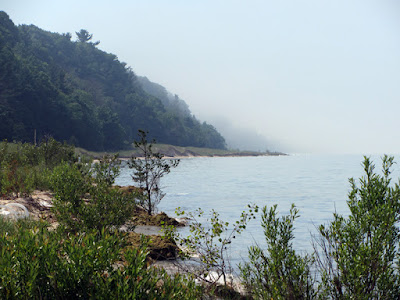 I felt like defying the ridiculous signage and taking the opportunity to exercise the natural right of shoreline access, just to piss everyone off. By walking between the water’s edge and the “ordinary high water mark” of a navigable body of water, you can circumvent private property laws, and this has been upheld in Michigan by legal precedent. 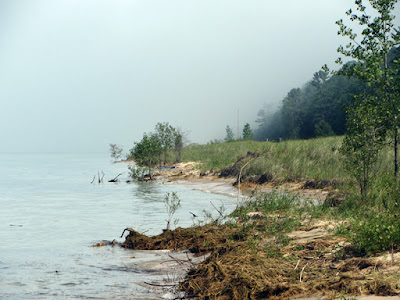 However, being that lake levels were currently at or above high water mark, and that I was too low on time to attempt such a long walk in uncertain waters barefoot, I opted to pass up my first time using that legal loophole. Not to mention all indications from aerial imagery pointed to there being nothing left to see of the Claybanks Settlement. 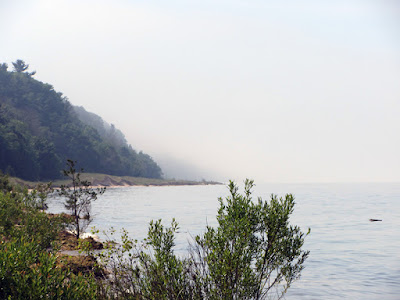 As I was leaving, a couple other obvious malcontents showed up in a van covered in stickers, apparently also looking to annoy the neighbors by the mere fact that people knew there was "DL" public access here. I got the impression they were freshwater surf hippies, and chuckled at the thought of affluent locals having to look out their window and see some scruffy surfer bums messing up their precious lake view they paid so much for. Luckily for them there were no waves today, but that wouldn't stop anyone from enjoying the newly legalized recreational use of marijuana on the 66-foot wide beach.