People often marvel at how much I know about Michigan's geography, or history, or whatever. In all honesty, I write this stuff down on this website because I forget half the places I've been, and half the things I learn about them. For instance these photos sat on my computer for three years before I started writing this post, and by then I wasn't even sure what some of the photos were of, or where exactly they were taken—but apparently I've been here, because they seem to have been taken with my camera. Luckily I am good at reverse-sleuthing, so now I can tell you all about these places and sound like I know what the hell I'm talking about. 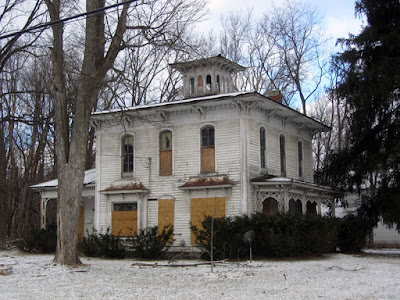 According to David M. Brown's Michigan County Atlas, Branch County in southern Michigan was set off in 1829 and organized 1833. It was named for U.S. Senator John Branch Jr., one of President Jackson's cabinet men. The Potawatomi tribe ceded the region to the U.S. in 1821, but they continued to roam the area. The Chicago Road was cut through here along the Great Sauk Trail in 1825 and settlement began, but at the time the whites were still far outnumbered by the Indians, "who were not at all pleased with their circumstances," and whites felt intimidated. 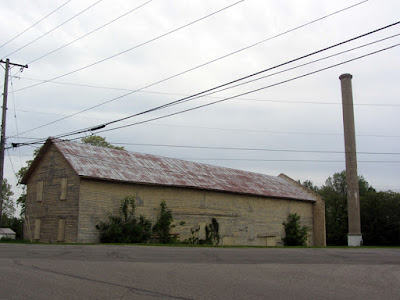 Those pesky natives were finally removed to Kansas in 1840 and at last white people felt safe enough to do white people stuff, like open a cheesecake boutique or go hang-gliding. With improvements to the Chicago Road, the Erie Canal, and the railroad cutting into the area, white settlement exploded in southern Michigan during the 1850s.

The city of Coldwater, the county seat, was settled in 1829 along the Chicago Road with hotels, taverns, sawmills, blacksmiths, and a chair factory. Brown notes that the city was named for the river the Potawatomi called "Chuck-sey-ya-bish," which means "cold spring water." 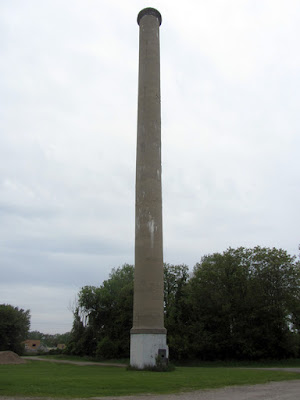 Branch County was also in the heart of Underground Railroad country, and locals here were well informed during that time. During the Civil War the Coldwater Cadets were amongst the First Michigan Volunteers that answered Lincoln's call, and they distinguished themselves in battle.

I have not learned what this old structure or its chimney had once been. 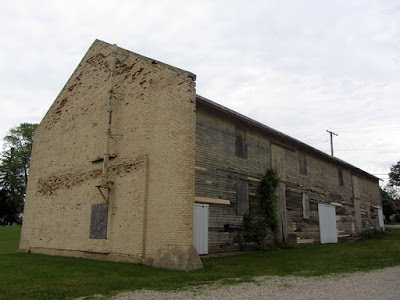 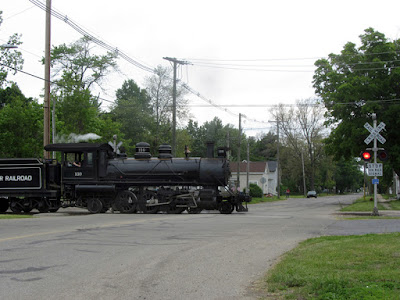 Many Michiganders may associate Coldwater with the large prison, or the old Coldwater State Home, which dates back to the 1870s. The campus includes a few vacant buildings, although I wasn't feeling daring enough to investigate closely: 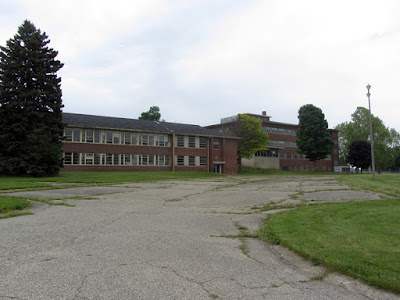 Outside of town I passed this old District No. 10 schoolhouse. Another vacant schoolhouse in the Coldwater area, the District No. 3 school, has quite an infamous history, and was even featured on TV. 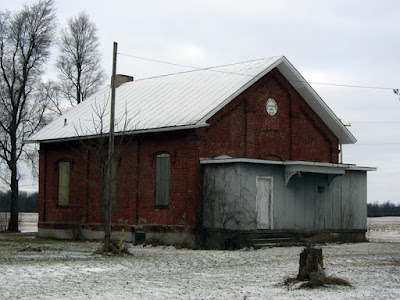 On Easter Sunday, April 15, 1990 Dennis DePue killed his wife and hid her body near the District No. 3 school. The case aired on the March 20, 1991 episode of the TV show Unsolved Mysteries, and it is claimed that the segment inspired the opening scene in the 2001 movie Jeepers Creepers. Here are some YouTube links about it, from the show: Part 1, Part 2, Part 3 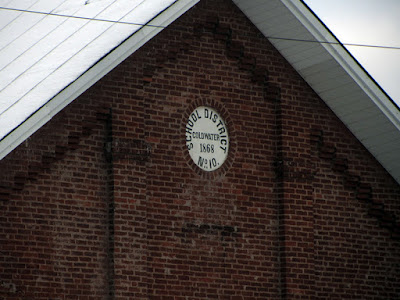 A couple more miles outside of Coldwater, along the Coldwater River, lie the ruins of the Black Hawk Mill, named after a chief of the Sauk tribe who lived in the 1820s: 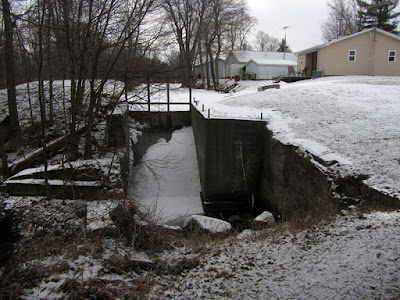 The mill was once part of the village of Branch, originally the county seat of Branch County from 1830 to 1841, and these ruins now represent the village's only surviving remnants. According to author Larry Wakefield, by the time Michigan began entering statehood in 1835 the village of Branch had several stores, a distillery, a postmaster, and a school / church / courthouse building. It sounds like the mill may have predated the town. 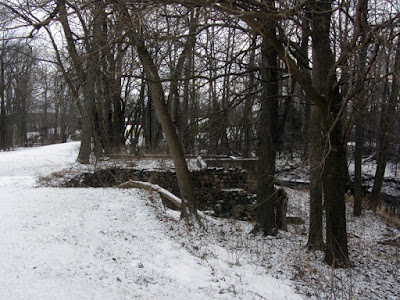 By 1837 Branch had a large hotel, a newspaper, and several hundred residents. The village was a full mile south of the Chicago Road (US-12) however, and had less-motivated politicians than the nearby town of Coldwater, which was right on the Chicago Road. As a result Coldwater eventually eclipsed Branch to become the new seat of county government.

In the 1830s there was an offer by local entrepreneurs to establish a more modern gristmill at this location. They offered Elisha Warren $75 for a half interest in the Black Hawk property, but Warren rejected the offer. According to Wakefield, that was the death blow for the village of Branch. 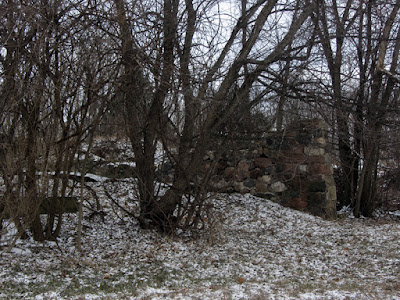 Even though the Black Hawk site was better for mill power, the investors built their new mill at Coldwater, and the decline of Branch began. It was finally finished when in the 1840s the Michigan Southern Railroad bypassed Branch in favor of Coldwater, which would be incorporated as a city by 1861. The Branch post office closed in 1864. 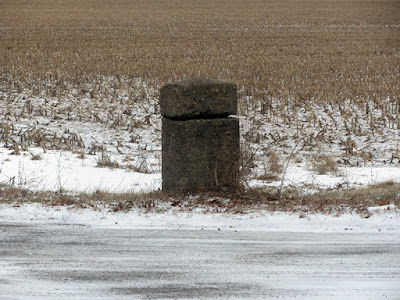 As I was driving through portions of the county I couldn't help but notice that there were a lot of these distinctive concrete markers, perhaps some sort of early benchmarks that denoted property corners? Some seemed to form gateways, like so: 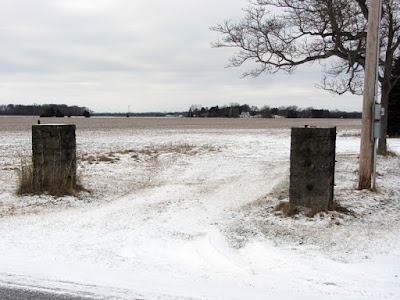 Here was another schoolhouse. Sure are a lot of attractive brick ones around here: 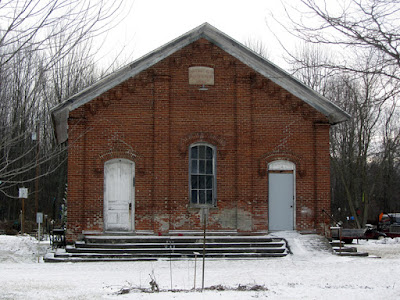 Today livestock, corn and wheat are the primary economic factors in the county, as they are across much of southern Michigan. The sight of century-old dilapidated barns is a ubiquitous one: 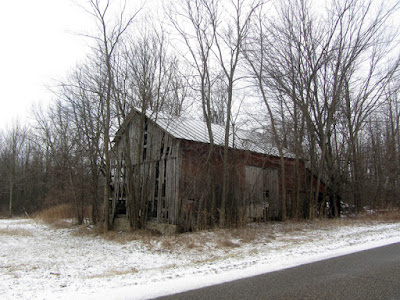 My next stop was another little-known Michigan town, Union City, along M-60 on the northern edge of Branch County. I did not expect to find this, so I pulled over: 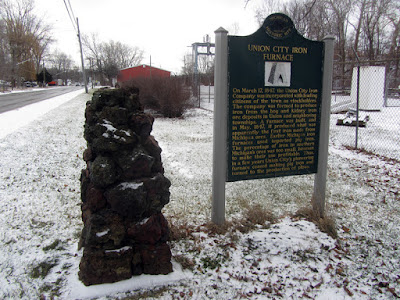 
Union City Iron Furnace. On March 17, 1847, the Union City Iron Co. was incorporated with leading citizens of the town as stockholders. The company was formed to produce iron from the bog and kidney iron ore deposits in Union and neighboring townships. A furnace was built, and apparently the first iron made from Michigan ores. Earlier Michigan iron furnaces used imported pig iron. The percentage of iron in southern Michigan's ores was too small, however, to make their use profitable. Thus, in a few years Union City's pioneering furnace ceased making pig iron and turned to the production of plows. 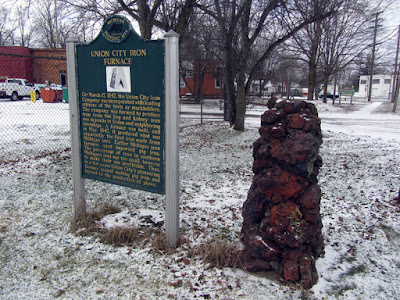 According to David M. Brown, Union City was settled in 1833 when Justus Goodwin built a mill here. It was most likely named for the "union" of the Coldwater and St. Joseph Rivers nearby. It was a station on the Underground Railroad in the mid-1800s. Portland Cement Co. opened in 1896, one of the first cement plants in Michigan. 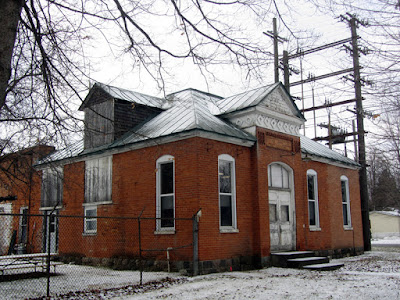 Also in Union City, I found the ruins of what was apparently another mill in Riverview Park on St. Joseph Street, near Broadway: 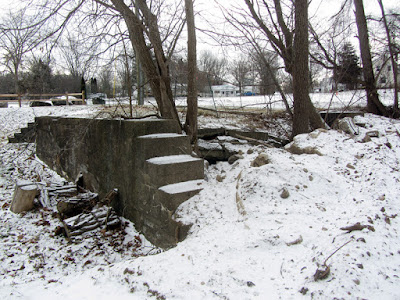 I couldn't really dig up much online or in my books about what may have been here, although I could probably assume this to be the last vestiges of the aforementioned mill Justus Goodwin founded in 1833...? In which case, that would make this my first Underground Railroad site I've officially featured on this website, but you'd think there would be a historic marker about something like that. 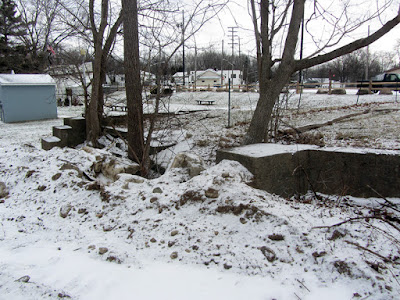 You can see it is right on the St. Joseph River: 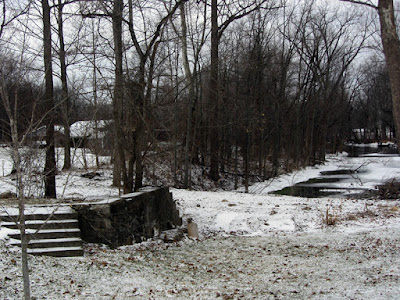 I did not get the chance to fully satisfy my curiosity regarding Branch County, as there were still some areas I wanted to explore, but I have not yet been able to get back out that way.