A Ghost of Old Poletown

This old farm market shed may be a familiar local landmark to city-goers who stray out past the borders of Midtown, perhaps while traveling along Ferry Street to eat at the land-locked Polish Yacht Club after visiting the Detroit Institute of Arts. It's a snazzy art-deco echo of the much more familiar Eastern Market, nearby: 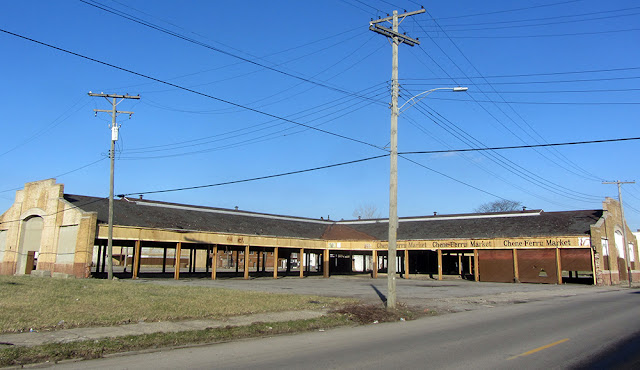 I have heard rumors that this old open-air farm market dates back to the 1800s, but unfortunately I don't think that is the case. The Chene-Ferry Municipal Public Market was the last of Detroit's municipal markets to open, in the 1920s, according to the book Detroit's Historic Eastern Market, by Randall Fogelman and Lisa Rush. Chene-Ferry was not yet standing by 1921 according to the Sanborn map, but there was a series of eight open parcels where it was to be built, and a ninth that still had a house and a shed standing. 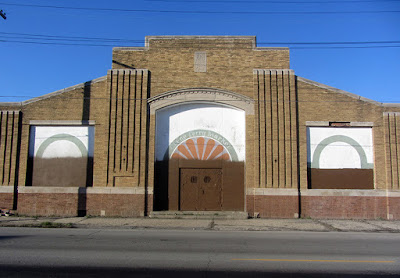 Another book by Elizabeth Clemens explained that Detroit had three municipal markets by the 1930s; Eastern Market, Western Market, and Chene-Ferry Market (which at the time was commonly known as "Polish Market"). The old Central Market in Cadillac Square was torn down in 1889.

In 1965 Eastern and Western Market were combined, but Chene-Ferry persisted on its own, presumably because it had a slightly different format and was open at different times than Eastern Market. 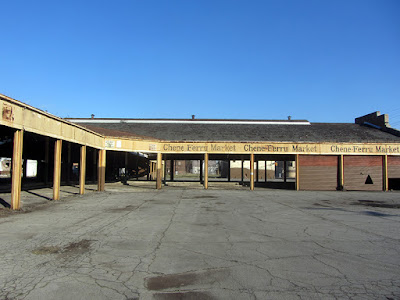 Once again, this is where Google Books comes in handy; the report Public Produce Markets of Michigan from 1936 by Orion Ulrey tells a little more about life at the Chene-Ferry, indicating that "Huckstering was the leading occupation of the dealers on the Chene-Ferry, while the jobbers around the market operated that majority of the dealer stalls on the Saturday afternoon market at Eastern." 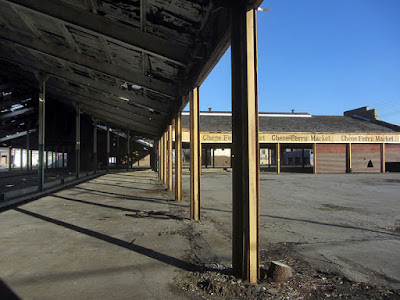 Fogelman and Rush go on to say that the city's municipal markets were one of the few things that actually did well during the Great Depression, for perhaps obvious reasons. The worst year of the Depression, 1933, was in fact the peak year for the markets, with tallies showing that 161,000 truckloads of goods had been brought to sale. 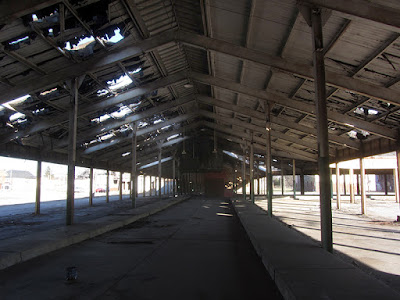 Of course this market's location placed it directly in the midst of Detroit's massive Polish immigrant community during the 1920s when it was built, a community once known as "Poletown."

Yet another book, Detroit's Polonia by Cecile Wendt Jensen, offers the Chene-Ferry as evidence of Polish immigrants' self-sufficiency, since they were quick to establish their own community resources, such as bakeries, churches, shops, hardwares, breweries, etc., and this market was an outgrowth of that desire to have their own support structure. "There you could buy a porker on the hoof, a live chicken, duck, or turkey, or fresh produce." 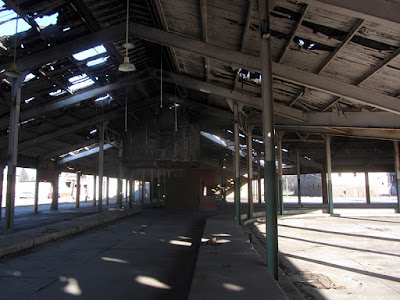 The Chene-Ferry ceased as a market in the 1980s, sadly. An article in the June 23, 1980 Detroit Free Press, paints a portrait of the sad decline of Poletown through the decline of this market...

The once robust commercial strip along Chene is scarred and silent now, except on Wednesdays and Saturdays, when elderly Polish women pulling little red wagons converge on the Chene-Ferry Market to haggle with farmers over the price of eggs, cabbage, and freshly slaughtered chickens.

There were more stories in the paper hearkening back to the glory days of Chene-Ferry, telling of the old-timers who had been selling here since the produce was brought in by horse-cart, of the quaintnesses of old Polonia, and of how everyone used to know everyone there. 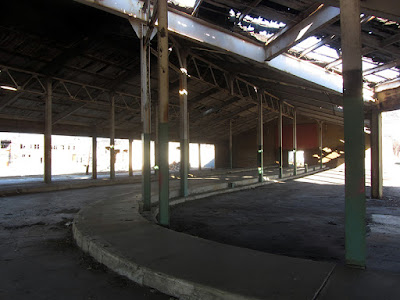 This market suffered badly from the destruction of the Poletown neighborhood, which was brought about when General Motors, in partnership with Detroit city government, began buying up land here through eminent domain so that they could build the "Detroit-Hamtramck Assembly Plant," under the promise of new jobs. Although GM refuses to acknowledge the unofficial nickname, most people refer to this plant as "Poletown Assembly."

An incredibly vast swath of the city was gutted for the project, with homes, businesses, and historic churches being torn down, sending hundreds and hundreds of the saddened former residents out of the city to the suburbs, thus accelerating "white flight." Yes, the new plant brought a few jobs to the area—but at the cost of downsizing other plants, and literally obliterating one of the few remaining strong neighborhoods that still existed in the heart of Detroit. Imagine demolishing Mexicantown. 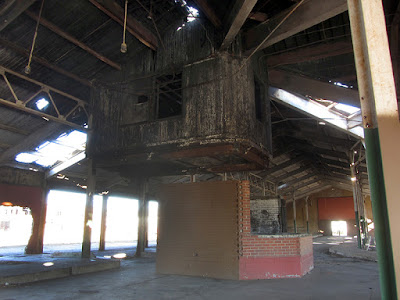 Another Free Press article from 1981 lamented that it wasn't just a lack of customers—there were not as many farmers coming to this market either, thanks to the nationwide decline of family farming in the face of industrialized agriculture.

This looks like a central administration booth of some sort, although the loft hovering above it looks like perhaps some small office? 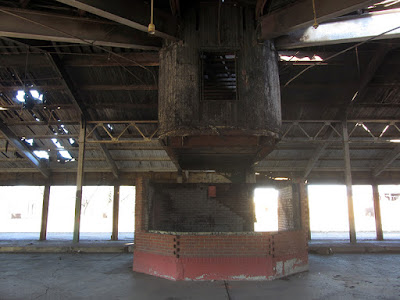 A book written in 2005 called Detroit's Eastern Market: A Farmers Market Shopping and Cooking Guide says that Chene-Ferry was mainly a produce terminal by then, and had not functioned as a market since the 1980s, but it currently housed a recycling collection center. The recycling program ceased in about 2006, and the shed became abandoned to the ravages of the inexorable blight that had engulfed the once vivid Chene corridor. 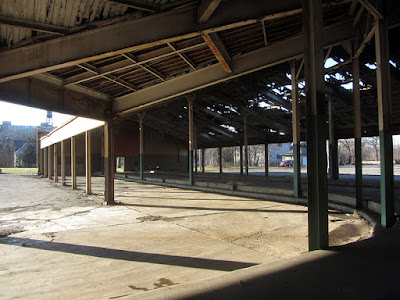 One other random thing I pulled up was that there was a murder mystery reported in the Free Press in the 1950s that involved this market, where a fruit farmer from Northville had last been seen here at his stand before disappearing, and eventually turning up dead. 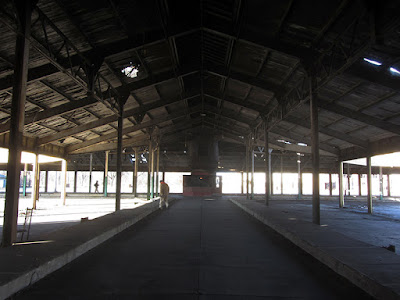 A poem was even written about this market, by Don Mager. It was published in a collection of poetry in 1975. Here are the first two stanzas:

This building is drab like a bunker.
Its twice-a-week business huddles one end.
Food-stamp buyers and a few farmers
trucked down from eastern counties, mostly men.
Obedient, lacking inflection—
none of them even dicker. If these
are garden-variety everyday men,
then they should join up as potatoes.
Some dark heat keeps them going, though, I suppose.

But eroticism is color,
skin, abundance—lavishness spilled
on sawhorse-jerried tables under
their steamy-white thermos-coffied
breaths. Their fingers are chilblained and chafed
in knit gloves, knuckle-length cut open.
They sort, count, weigh, as if honied
sweetness, spiny juice, pungency, or burn,
might in this market be imbibed by touch alone. 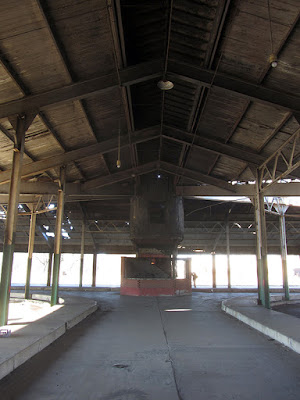 Ironically, the recycling program that was housed here in the 1990s after the market closed was run by the Greater Detroit Resource Recovery Authority—in other words, it was operated by the same entity that operates the giant, hated trash incinerator that looms nearby with its giant smokestack and putrid odor. The toxic stench of that incinerator is yet another one of the factors that led to the demise of the Poletown neighborhood. And as it turns out, the incinerator is also where GM's Poletown Assembly Plant gets its power from. 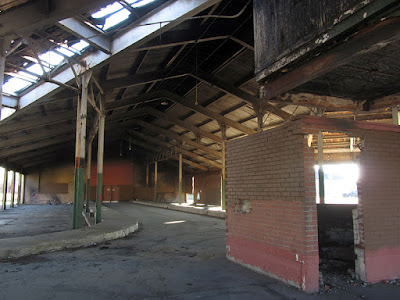 It was reportedly protests against the building of that trash incinerator that spurred Detroit's first recycling program into existence—Cass Recycling Drive—but the article goes on to say that the Cass recycling program was so successful that it was constantly spinning participants off to other suburban communities that wanted to start similar programs. As a result it was hard to keep the drive going in the city.

Now, an alternate version of this story that I've heard is that the recycling program here ended with a big fuss because there were suspicions that the program was tied a little too closely to the the corporation that runs the trash incinerator, and people suspected the materials were actually being used to fuel the incinerator instead of being recycled. Supposedly this was confirmed one day when somebody followed the recycling truck after it left the market. The incinerator needs trash to keep functioning or it becomes just a big useless building, and recycling takes away from its potential fuel supply. Supposedly this was why the new "RecycleHere" program had a tough time getting established in the city—people weren't sure that the materials they saved were actually being recycled, so they took their recyclables out to the suburban centers. 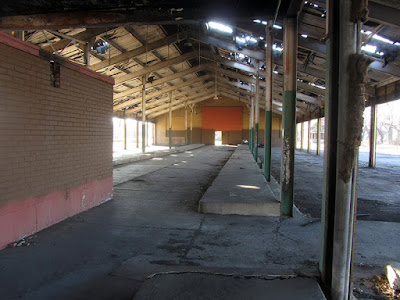 More recent articles at crainsdetroit.com and freep.com from October of 2015 reported on a kick-off event for a project called "Recovery Park Farms," where Mayor Duggan gave a speech in this shed to announce the plan to transform this "blighted" 40-acre area into a "thriving agricultural business." The nonprofit Recovery Park Farms would lease the land for $105 per acre per year from the city, and eventually buy it for about $3,500 per acre, the articles claimed.

The project's goal was to grow food commercially inside the city while putting recovering addicts and ex-convicts to work and using its profits to support SHAR, an addiction recovery agency. Presumably this historic shed would be integrated into the project and reusing it as a farmer's market again. 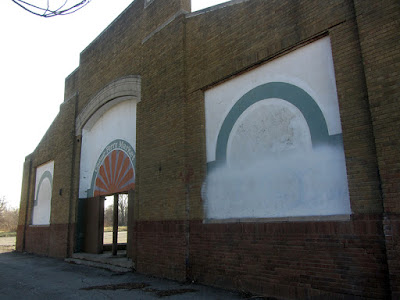 I remember hearing about a weekend volunteer effort with the Motor City Grounds Crew in September 2015 to take down all the overgrowth and clean up the site ahead of the mayor's visit, but I was unable to attend since I was committed to another project on the west side that day. 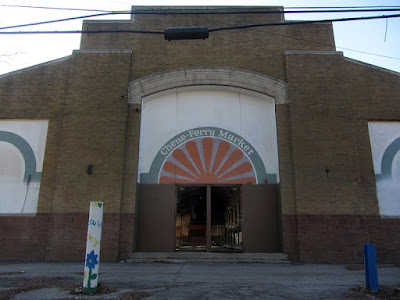 This white-washed ruin off to the side was actually once a comfort station for the market, in other words a public restroom: 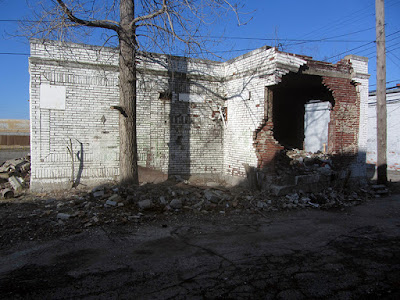 Incidentally, those who follow the Detroit music scene might also recognize the Chene-Ferry Market as a backdrop in a music video by local rapper, Dice. 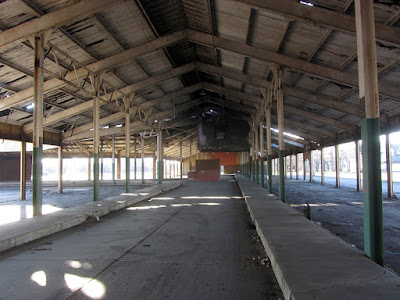 The signs here implored customers not to drop off recyclable materials when the center was closed, and then lists the hours of operation as Wednesday, 10am-2pm, and Saturdays, 9am to 3pm: 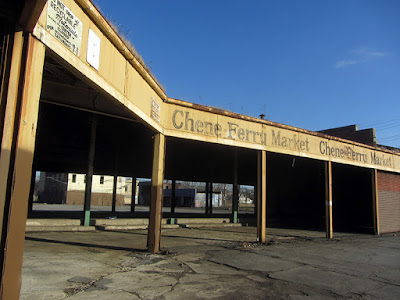 A 1974 article in the Free Press also said that unlike Eastern Market, this market operated only two days per week, Wednesdays and Saturdays, 8am to 6pm. Though the hours have varied, it seems that the Chene-Ferry was always a Wednesday-Saturday thing. 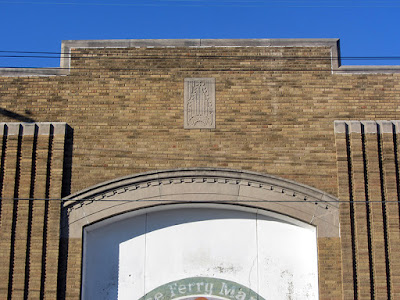 May I speculate that either Corrado Parducci, or Charles Agree may have had a hand in the design of this structure? Look at the stepped arch around the "frozen fountain" motif: 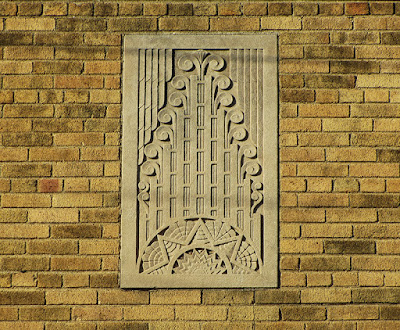