Undoubtedly the main reason that anyone knows about the Emma Thomas School on Detroit's east side is because it sat across the street from the Packard Plant and thus often filled the viewfinder of the typical "urban explorers" who strolled in numbers through the window-filled main corridor of the plant along Concord Street.


These two photos were taken from the third floor of the plant, before and after the school burned.

The school opened in 1906, named after a very influential local woman who had just passed away the year prior, Emma A. Thomas. According to the book Women Music Educators in the United States: A History, Ms. Thomas was the supervisor of music education for Detroit Public Schools, as well as a teacher of vocal culture at the old Detroit Conservatory of Music. 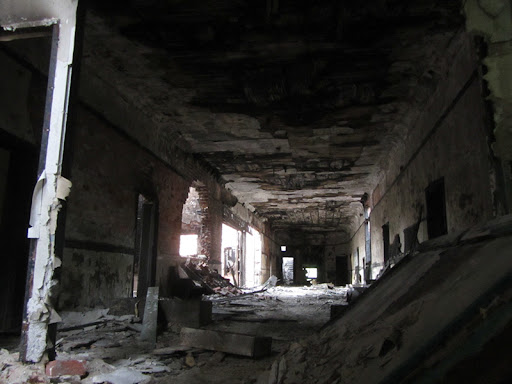 Ms. Thomas was responsible for moving the National Summer School of Music from Chicago to Detroit in 1891. She was also one of the teachers included at the 1893 session held at the Detroit Conservatory; the outgrowth of these summer music classes in Detroit was the founding of the Thomas Normal Training School, directed for many years by Emma Thomas's daughter, Jennie Louise Thomas.

Emma Thomas was also vice president of the National Endowment for the Arts Dept. of Musical Education in both 1898 and 1901, making her one of the first females to hold an office in that organization, author Sondra W. Howe writes. Emma Thomas is mentioned in a litany of other similar books about the history of music education in America, illustrating just how well-remembered she was. 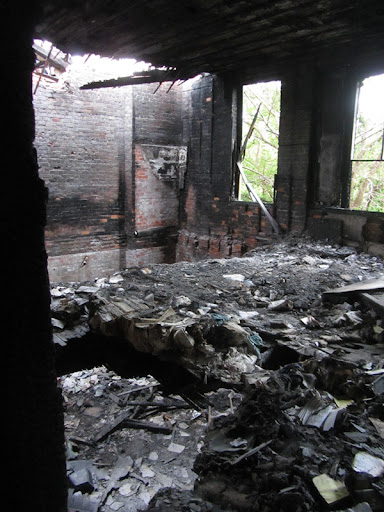 This school is also listed on Marygrove College's excellent "Literary Map of Detroit," by virtue of the fact that it is prominently mentioned in Gloria Whelan's story, The First City. Gloria Whelan is a Detroit-born writer of some fame, who wrote a narrative account of living in this neighborhood as a child in the Great Depression when the Packard Plant was booming, and of going to class at Emma Thomas School.


From the dawn of the Twentieth Century, the fate of Detroit’s schools and the fate of Detroit’s automobile factories have been inextricably intertwined. Nowhere is this more apparent than on East Grand Boulevard at Concord Avenue, where the shabby hulks of Emma Thomas School and the Packard Motor Car Company factory stand like monuments to the boom and bust cycle of the city’s industrial history.

Marygrove's webpage says that The First City "captures the intimate—and ambivalent—relationship between the school and the factory," and as the narrator struggles in her new surroundings the two "become symbols for innocence, learning, and the intimidating, malevolent power of the industrial city." The Packard Plant is in fact a central figure in Whelan's story, as well as "an emblem" of the Motor City's "stark and menacing energy"...


I was eight the year we all moved into Detroit and nothing in the city seemed safe or even reasonable to me, least of all the Packard plant ringed round with its snarls and tangles of railway track. We moved to the Boulevard in the heat of summer and the windows of the factory were open so that you could see the blue-green glow of the plant and hear the screams and clank of the machinery. On a hot, windy day you choked on its sulphurous odor. In the music room of my grandparents’ home on Mt. Elliott Street my grandfather had painted a mural of Wagner’s “Ring of the Nibelung.” I was convinced the inside of the factory must be like the cave where the ugly Alberich hammered away in the eerie glow of the flames from his forge.

Thomas Sugrue even draws from Gloria Whelan's portrayal in his Origins of the Urban Crisis, offering this vision of the Packard neighborhood as a portrait of Detroit in its peak years:

At shift change time, the area came to a virtual standstill, as cars, buses, and pedestrians clogged the streets. The whole area was often covered in a grayish haze, a murky combination of pollutants from the factories and car exhaust. Even at night the area bustled...

The narrator of The First City says that on the first day she attended the school she could see "the factory breathing hell fire" from across the street, and noticed that “everything at this school was old or broken,” in comparison to the school she had attended before—


—the drinking fountains gave up only a stingy trickle of water; the desks were gouged and stained; the inkwells had lost their covers; and the window shades, like dried leaves, had thin places through which the light came.

So bewildered by this austere environment, she accidentally leaves school by the wrong door, and finds herself advancing "deeper and deeper into the incomprehensible world of the factory."

The Marygrove article suggests that Whelan is portraying the factory in this way as a sort of metaphor or synecdoche for the industrial city of Detroit itself—"frightening and harsh," but also necessary. "It may be hellish, ugly and sulphurous, but it puts food on the table. The factory is a world of compromise, and the school it looms over bears witness to that lesson." It also seems to be just as austere as the Packard Plant; despite the pleasant trees and homes on the boulevard, the adult realities of Detroit life in the 1930s are portrayed as very harsh through the eyes of a child narrator.

My own visit to the school came as an unexpected choice of change...for so many years we had looked at this school from the windows of the Packard Plant across the street saying that one day we would bother to go over there and check it out. Of course, it was almost a decade before we actually got up the motivation to walk across the street and go inside.

When we finally did so on a whim one day, it was like entering another dimension; I had become so accustomed to experiencing this area from the same side of Concord for so long that when we finally crossed the street it seemed as if we had stepped through a portal to the other side of a mirror.

I could remember back well before this school was burned, before it was even vacant. When I first started exploring the massive Packard Plant, there was even a huge "PACKARD" banner draped over the front of the school (seen in the first photo of this post), and some vehicles were parked outside. Little did I know, this was one of Mr. Cristini's hiding spots before he finally went to jail. It was when he started dealing drugs out of this building and holding raves in the Packard that he was finally pinched.

There was one day where some friends of mine "met" Mr. Cristini, or perhaps one of his cohorts...which is to say, more accurately, that they saw someone standing on the roof of this school with a shotgun, and cocking it so that they could see that it was loaded. Apparently he was not interested in giving any tours of the Packard Plant that day. Emma Thomas School was originally built in direct response to the need for schools in the face of population expansion where Detroit's new automobile manufacturing plants were being built. It was built to accommodate the education of the flourishing immigrant children that were filling up the sprawling neighborhoods of the new city.

Originally a K-8 school, Emma Thomas was changed to a regular elementary school some years later once the DPS began erecting more purpose-built intermediate schools such as Hutchins and Sherrard Schools.

The school closed in the 1970s, after which it eventually became part of the venture known as "Motor City Industrial Complex" at the Packard Plant, and it was occupied by small businesses.

You can see just how closely and how massively the Packard Plant looms across the street from Emma Thomas School, from these photos. In one line from The First City, the narrator's father asks, "I wonder how the children can study with all that noise?" 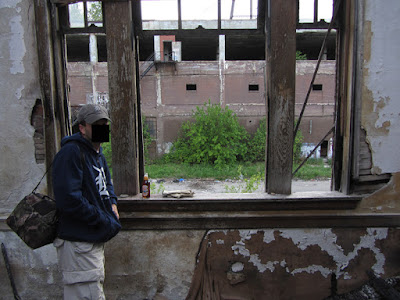 Emma Thomas School burned around Thanksgiving of 2009. I sort of wish I could have been there to see it from the Packard Plant, as I'm sure the blaze was unreal. The ruined shell stood until 2013 when it was finally bulldozed. 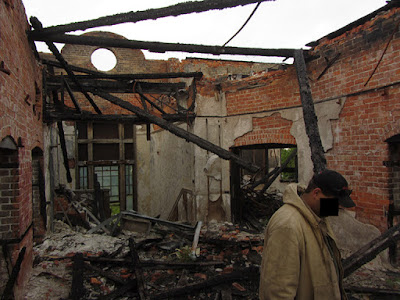 Venturing down into the basement levels, I noticed that the building sat on an all-masonry foundation.

We heard what sounded and smelled like a mall fountain...the loud rushing of water, and the slightly chlorine-scented mist in the thick air told us that a rather large municipal water leak was erupting nearby. Given the fact that the tunnels under the Packard Plant across the street were also basically like a waterslide park unto themselves, this didn't surprise us in the least. 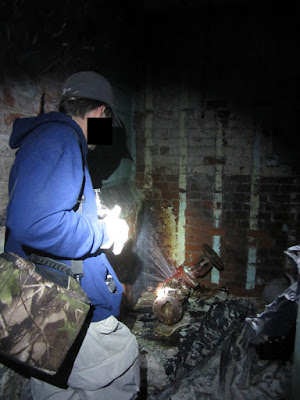