I'd been eyeballing this church for a long time since it closed, since I often drive past it on my way to my girlfriend's house (so like, a lot). It is on West Grand Boulevard, just down the road from the Motown Museum. 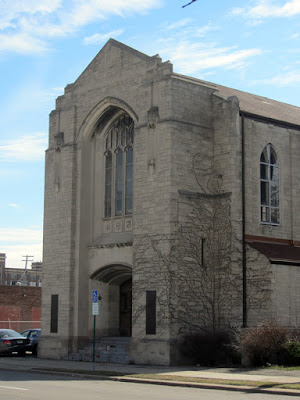 Not to be confused with Most Holy Redeemer Catholic Church on Vernor, this church, the Redeemer Episcopal Church, was built at 2746 West Grand Boulevard across from Henry Ford Hospital. 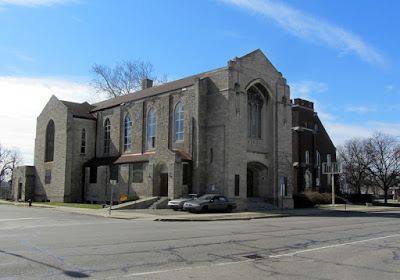 According to Landmarks of Wayne County and Detroit by Robert Budd Ross and George Byron Catlin, this church was originally established in 1888 as the Church of the Redeemer, their first building was at Holden & 5th (Forscythe Ave.), a corner which no longer exists, having been in the path of the Lodge Expressway, which was dug in 1953 or so, taking the church out with it. 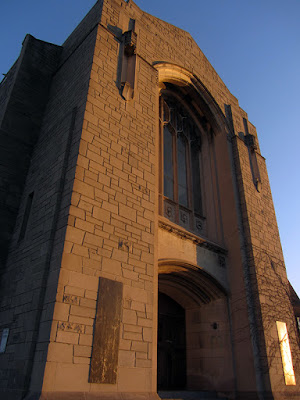 According to the Detroit Historical Society, the intersection of the Lodge and Edsel Ford Expressways (right about where the old church would have stood) was "the first complete interchange between two freeways built in the United States." The congregation was Reformed Episcopal, and one of five churches then in Detroit that was a reformed version of a specific creed. 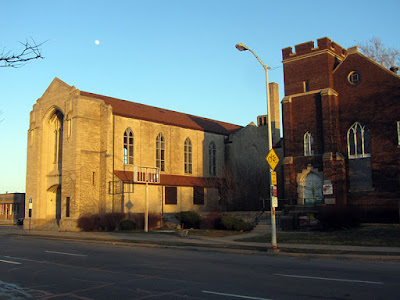 The Church of the Redeemer had already moved to a new spot long before the freeway was dug however, having erected their second location here at West Grand Boulevard in 1913. That's the smaller brown brick building you see on the right in the previous photo, which according to The American Contractor was designed by architects Stahl & Kinsey.


The most recent congregation to occupy this pair of sanctuaries was the Sweet Home Baptist Church. 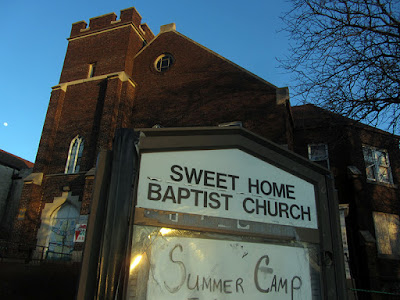 A look at the c.1910 Sanborn map of this area shows nothing at the corner of the Boulevard & Sterling, and very few houses built yet. Also, what is now considered the north end of Trumbull was then labelled as Dillon Avenue. 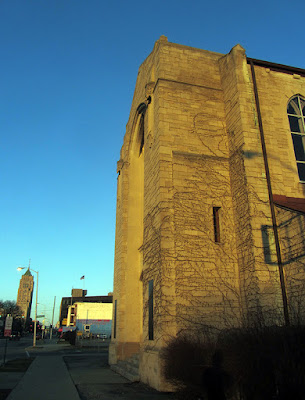 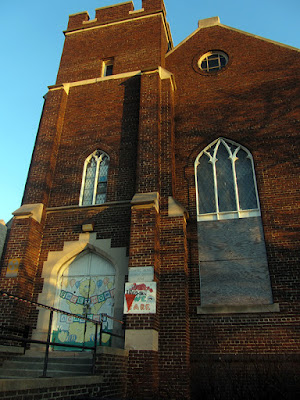 Two years after the church was built Henry Ford Hospital opened here in 1915 on the edge of what would soon become New Center, reflecting the build-up of the area as the booming city of Detroit began sprawling northward. What was then considered the "north end" of the city would quickly be overtaken by the wave of Motor Capitol prosperity, and with the settling of the "Ten Thousand-Acre Tract," found itself designated as the city's "New Center," with new skyscrapers rising just a few blocks east of here. 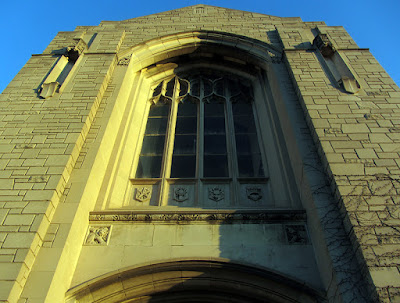 General Motors built their massive new world headquarters and laboratories in 1922, and the monumental art-deco Fisher Building sprang up in 1928. Lee Plaza was built a little to the west in the same year. Two other historic churches of note in this area that I have explored on previous posts are St. Agnes Catholic Church, King Solomon Baptist Church; both of which were also expanding around the same era as the Church of the Redeemer. 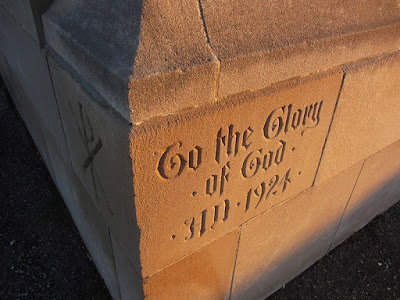 This stone building was built in 1924, the Church of the Redeemer's third structure, reflecting the fact that the population of the area was soaring, and required a larger sanctuary to house its burgeoning flock. It also undoubtedly reflects the increased wealth of the newfound church members, since this was a much fancier building, architecturally, than the modest brick church it superseded. 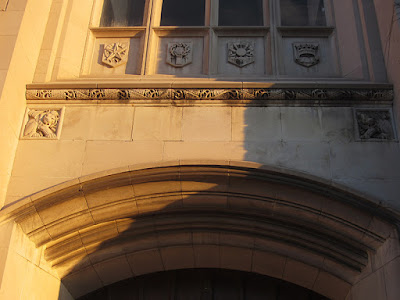 The Inventory of the Church Archives of Michigan noted in 1940 that the Church of the Redeemer changed its name in 1936, to Redeemer Episcopal Church (actually, it has it down as Redeemer Presbyterian Church, but this might be a typo). 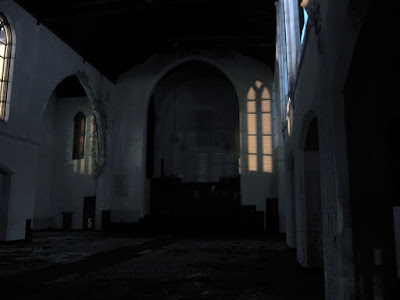 How I ended up inside this well-sealed and well looked-after church at night is a matter of coincidence mostly, one of those things where I just happened to make use of a momentary portal to pop my head in and out briefly before said portal disappeared again. Kind of like Bugs Bunny popping his head out of the ground, looking for Albuquerque. 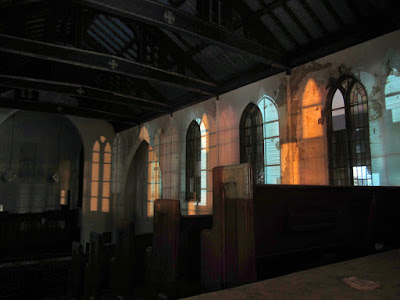 Coming up into the loft, I was stunned by the inadvertent beauty of divided streetlight being somehow prismatically cast in multiple hues upon the opposite wall. And thankfully I actually had my mini-tripod with me, so I sat down and made a novice effort at capturing it since my more professional partners had actually not brought any of their gear... 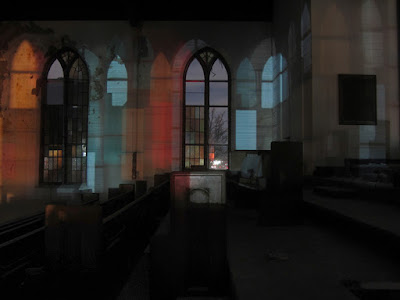 ...I guess lugging around 40lb vintage accordion cameras and the practical meth-lab setup required to do collodion process glass plate photography on the street does get burdensome after awhile, especially when getting in here involved such filthy acrobatics. 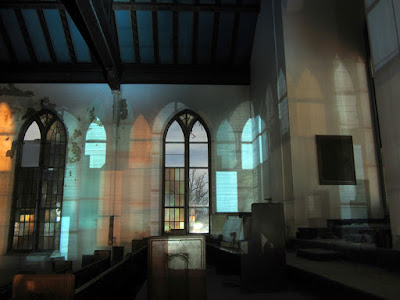 A view across the street to the massive Henry Ford Hospital: 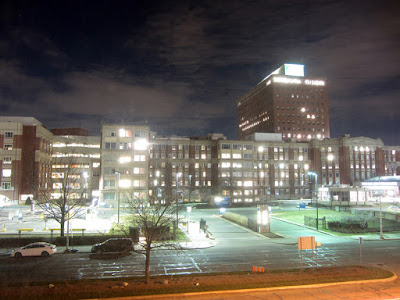 The hospital has its own police authority, who I know from experience actively patrol areas of the city beyond the hospital grounds, so stealth was key.

I have a feeling that this church may have had real stained-glass windows at one point, and that these are cheap replacement windows that were put in during the 1950s or whenever the original congregation moved on. Those in turn must have been replaced with the clear plexiglass panes, as the colored ones were lost to damage. 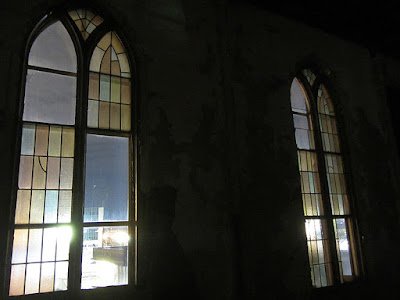 A little "flashlight-painting" here during my long exposure brought out the details of the ceiling beams adequately enough: 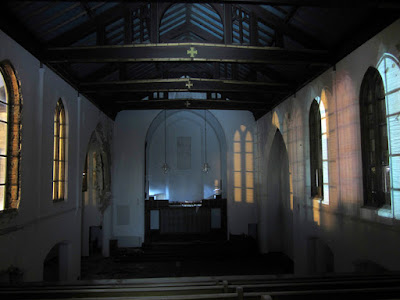 An organ console up next to the altar: 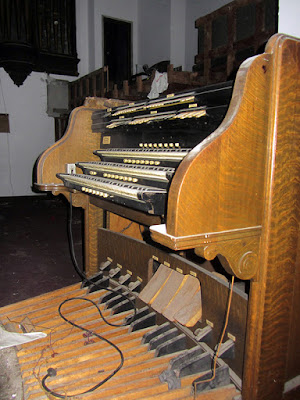 Looking from the altar to the rear of the sanctuary, while doing more flashlight-painting: 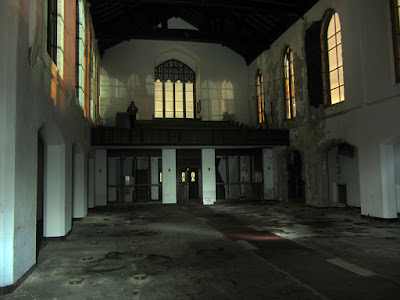 As you can see, the beginnings of water damage are already starting to take effect. 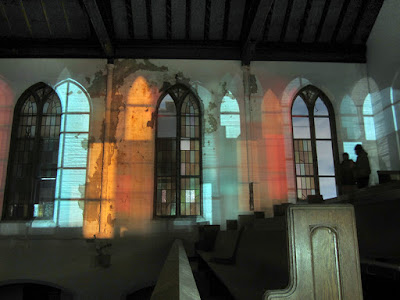 With some of these shots I really had a hard time Photoshopping / auto-correcting the originals...even though they are dark, I think they lost something when they were lightened. 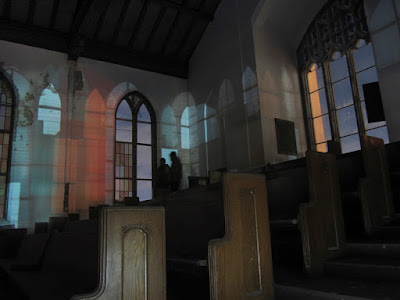 This next one was some handheld cowboy sh*t, since I was getting too lazy to worry about figuring out how and where to set up my mini tripod...but I like the composition so much I'm willing to deal with the blurriness and graininess. Anytime you can fit the Fisher Building into a shot is a win: 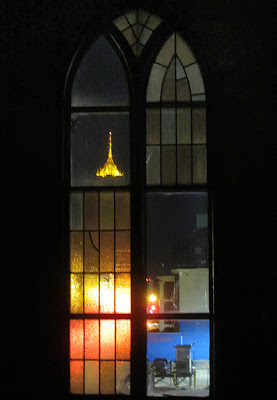 ...also seen there is that strange, recently-demolished coney island / apartment building with the tall three-story Greek columns on the front of it.

As a matter of fact that building, and both of these churches were demolished by the close of 2016, with Henry Ford Hospital planning to use all of this land for a huge new cancer center. The rumor I heard was that the facade of the bigger stone church is going to be deconstructed and re-incorporated into the new development. 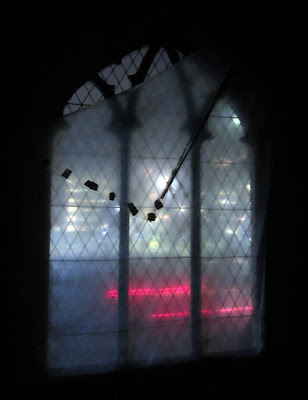 Moving over to the older brick church structure, we found what looked to be a day care center, lately known as the "Sweet Home Academy." 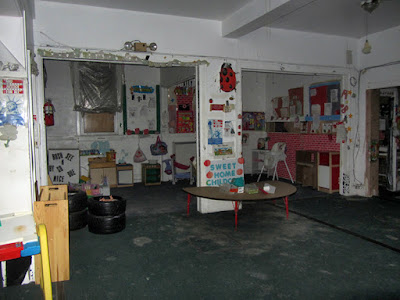 Aside from the gothic-arched windows and door, the interior of this structure certainly didn't look anything like a church anymore, having probably been heavily modified to be used as a parish house after the big stone church was completed in 1924. 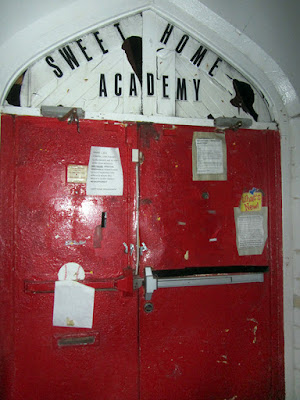 Oh for god's sake...yet another abandoned Detroit house--in the stairwell even! 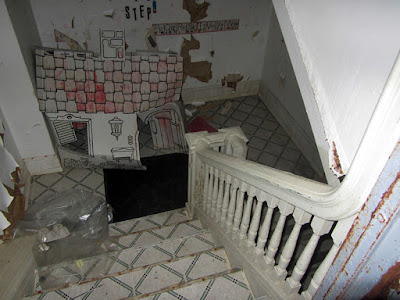 Somebody call the Blight Busters, or the Land Bank or something.