At 18520 W. Seven Mile Road once stood the Arnold Home, which was an "old folks' home." It was torn down in 2013, a move that gained quite a bit of steam after two scrappers were crushed to death while trying to remove pieces of the structure, causing part of the building to collapse on them, a tragedy which made a big splash on local TV news in 2011. 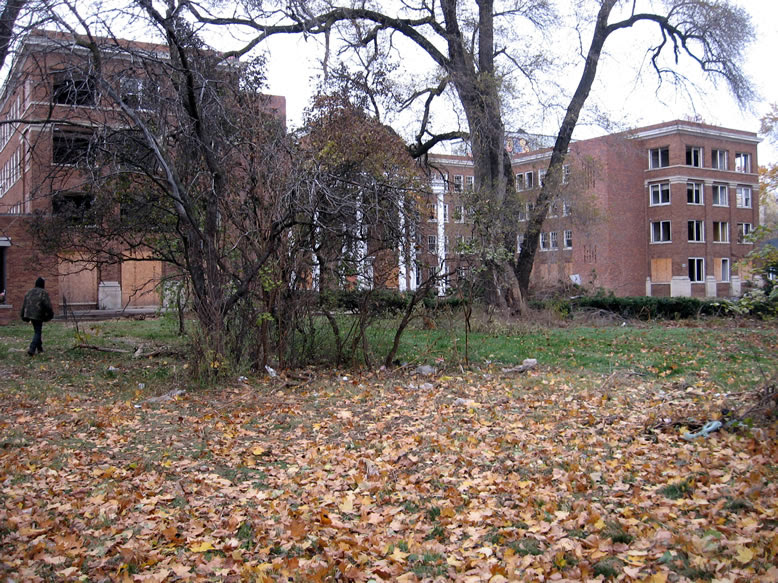 The building was owned at the time by a land speculator who admittedly had no plans for the property. It was nestled into the front of a residential neighborhood that could be viewed as kinda sketchy or fairly decent, depending on which angle you looked at it from. Since I don't have a lot of photos of it, this will be a fairly short post. In fact, I guess I don't have any photos of the interior at all, so I've spliced in a few from my friends. 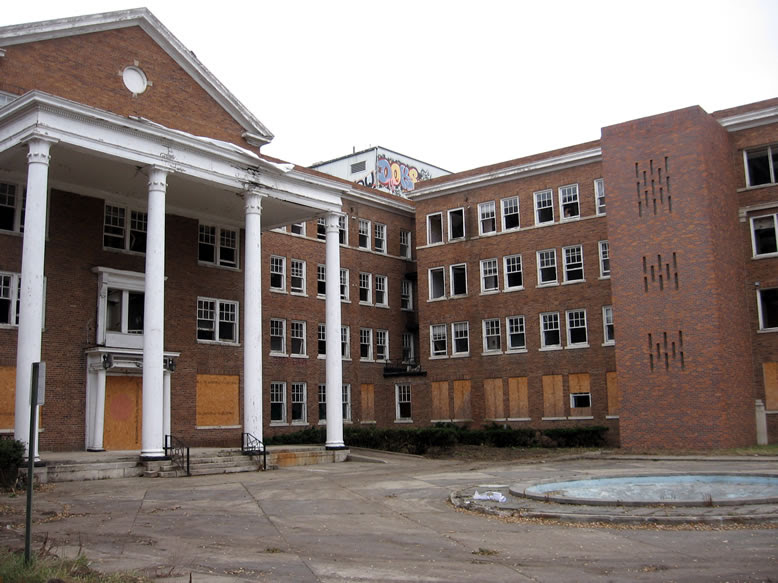 According to a historical blurb in a pamphlet about the Arnold Home found by my friend Kristen on the floor of the Arnold Home itself, the Reverend Charles London Arnold, PhD recognized "a growing need among the elderly of his parish for a secure refuge where they could spend their advancing years in dignity," with "compassionate medical care" readily available.

At the time he was the rector of St. Peter’s Protestant Episcopal Church across from old Tiger Stadium (called Bennett Park back then), and in 1899 he founded the first "Arnold Home" in a cottage on Baker Street in Corktown, where he and the Visiting Nurse Association cared for six elderly folks. 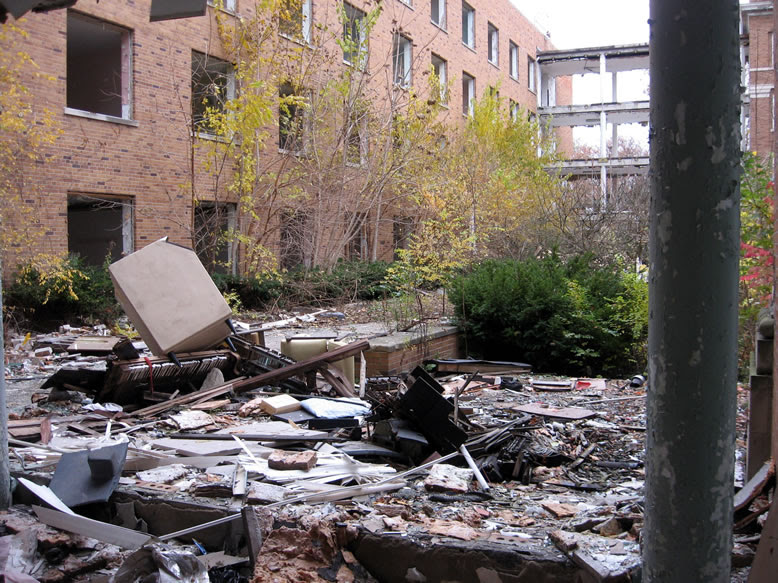 The full name of the charitable institution was "Arnold Home for the Aged and Hospital for Incurables," according to the Detroit Public Library's Burton Historical Collection. The idea was successful and it required several moves to larger buildings over the years as they expanded, one of which was located at 706 W. Fort Street in 1914, according to Polk's Medical Register and Directory of North America, which was near the corner of 15th Street. The Polk's listing also showed that the home had a capacity of 60 patients at that time.

The structure on Fort Street was demolished by 1916, and from looking at the Sanborn maps I can see that by 1921 the spot was occupied by warehouses. Next-door was the Universal Button Fastener & Button Co. factory, across the street was the Michigan Paste Company paste factory, as well as a fender and sheetmetal works, and the Batchelder-Wasmund stone cutting plant (which still remains today). 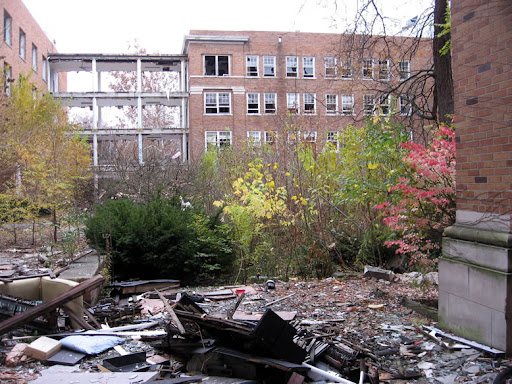 According to a c.1907 article I pulled up in the Free Press, the treasurer of the Arnold Home at that time was none other than Hamilton Carhartt, the founder of the famous work-clothing company Carhartt, Inc., which has been based in Detroit since 1889. My colleague at corktownhistory.com once wrote an excellent post detailing Carhartt's connection to the same Corktown neighborhood where the Arnold Home originated.

A different blog called Krentz relates a story about Reverend Arnold and a career burglar he tried to reform, published in the July 5, 1912 New York Times. Claude Camerson came from Toledo "looking like a tramp," so Rev. Arnold took him in, cleaned him up, and gave him a job at the Arnold Home. After that Camerson took the keys to his house, and robbed it, then put the keys back. Camerson did this a few times over a few months and Rev. Arnold ignored it, but when he finally broke in while the reverend and his wife were sleeping to rob them at gun point, that was when Arnold decided it was time to have him jailed.

Reverend Arnold himself died in 1925, and had directed the Home along with a board of trustees up until that time. His daughter Mabel took over management of the Arnold Home after her father's passing. 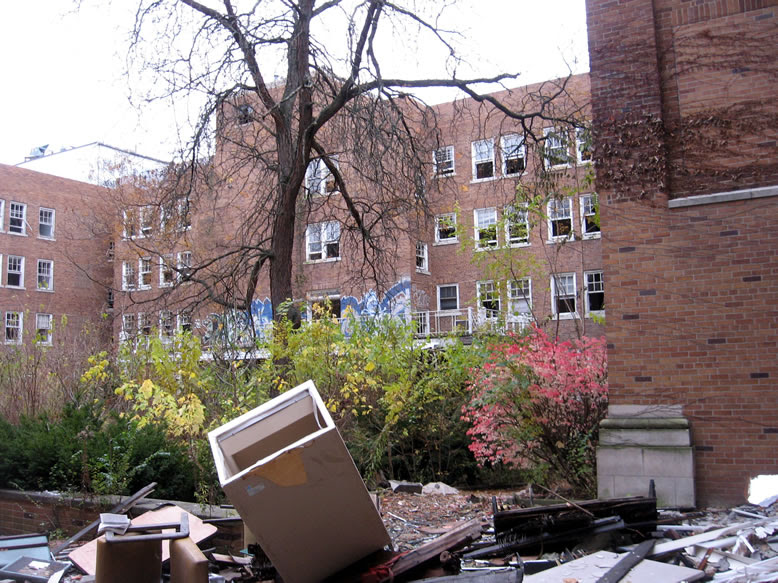 After moving from the Fort Street location, the Arnold Home took up residence on Selden Avenue, and by 1931 there was another building on Grand River. This current structure was built at the same time on Seven Mile Road from 1931 to 1933, and became the privately-operated Arnold Home that we know today.

It was designed by local architects Weston & Ellington, who also designed the Burtha M. Fisher Home for the Aged, and the Sarah Fisher Home for Children, the Hotel Fort Wayne, the Metropolitan Building, and the Wardell Apartment Hotel (now the Park-Shelton, across from the DIA).

Several expansions were later added onto the home, and in 1956 the John Brown Wing was built, to provide intermediate nursing care for those who required some medical attention. The Henry L. Caulkins Building was added in 1968, to offer attractive apartments for "independent retired persons." The c.1930s "Main Building" was remodeled in 1962 (blechh!) to make room for a skilled nursing unit and 224 more beds.

An obituary in the Grosse Pointe News said that one of the later presidents of the Arnold Home was none other than Wilber M. Brucker Jr., son of the former Governor of Michigan and Secretary of the Army, Wilber M. Brucker (who was a trustee of the Woodward Avenue Presbyterian Church, as I talked about in a previous post). Wilber Jr. had also served as the director of the Bank of Dearborn, the Wayne State Board of Governors chairman, legal counsel for the Economic Club of Detroit, arbitrator for the American Arbitration Association and was a 50-year member of the Michigan Bar Association before dying in 2003. 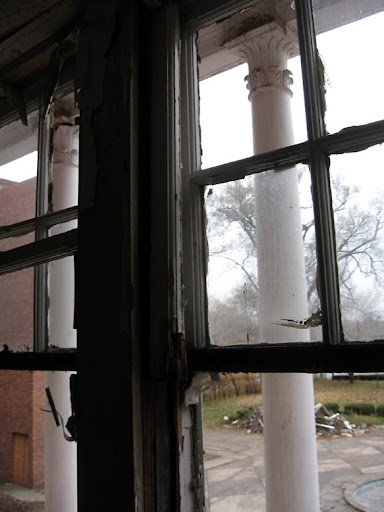 According to a consensus amongst commenters on detroityes.com, during the Arnold Home's decline starting in the 1970s and onward, there were lots of problems with quality of service provided by the institution. There was a lot of employee theft from vulnerable elderly residents going on, and a general stink of urine and uncleanliness about the place, according to most complaints I have heard. This comes as no surprise, since this describes most state-run custodial institutions around that time as well, such as the Northville State Hospital. 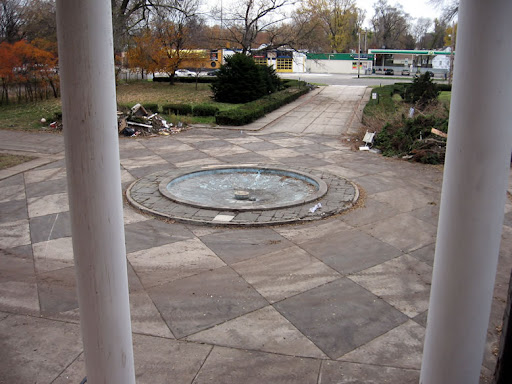 By 2001 the home had closed for business permanently. The vacant Arnold Home was guarded by private security guards until about 2008, which was when the scrappers descended on it.

For what it's worth, I've been told that Aretha Franklin's mother was a resident here at one time. 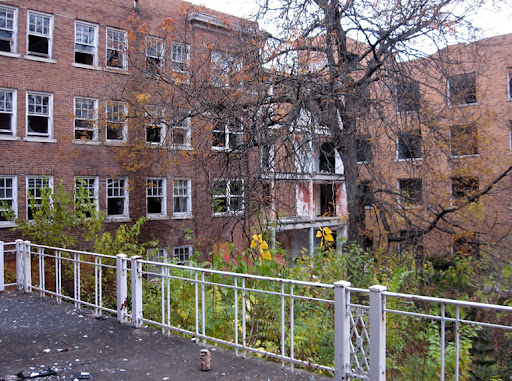 This courtyard was a pretty decent spot to hang out for a bit. I found it interesting that the original wooden window sashes still remained throughout the old c.1930s main building...either someone was too cheap to renovate, or someone was really concerned about maintaining historical integrity. But yeah, I'm just going to presume that the former was the case. 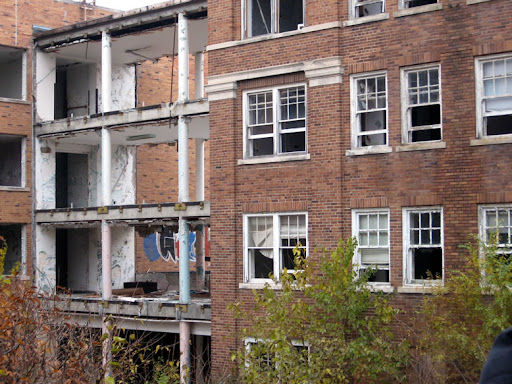 This looks like the c.1956 John Brown Wing mentioned a few paragraphs ago: 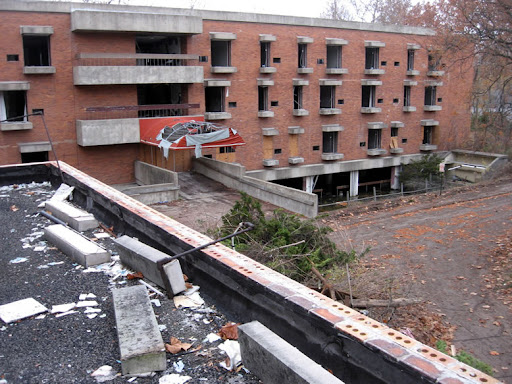 These now-naked connecting hallways once bore floor-to-ceiling windows I presume, but that was all knocked out for the aluminum frames, most likely: 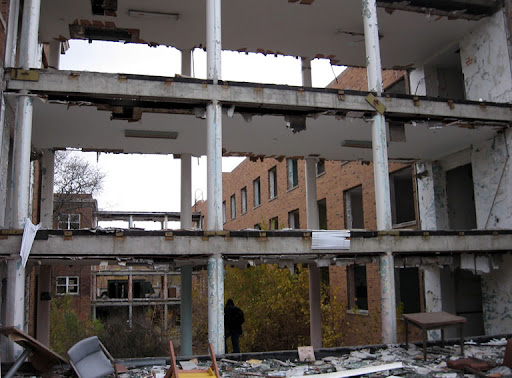 There was an interesting terrace level to this 1950s beast that had filled up with water since becoming abandoned, making it look like a moat, with a little bridge crossing it to get to the front door: 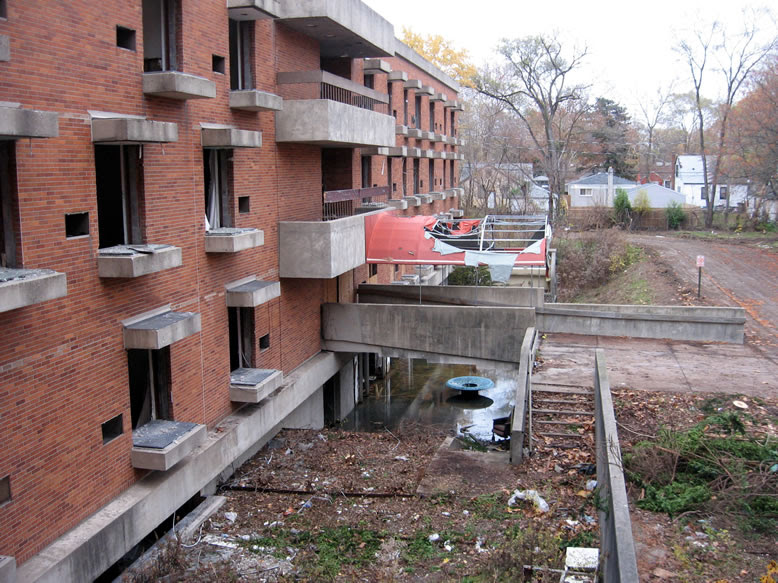 One of the cliché ruin-porn photos from the Arnold Home that everyone started taking was of a graffiti tag hastily done by a good Philly friend of mine (who also wrote the same phrase in Cass Tech and a few other places during one of his visits), in 2008:

Neither of us ever imagined such a trite throwy by a totally unknown writer would garner any attention let alone mainstream media play, so he even made a Facebook page to serve as a sort of sarcastic repository for internet links to other peoples' photos of or media attention to his "God Has Left Detroit" tags, which even included being featured in the big-production coffee table-format photography ruin-porn book Detroit Dissassembled, by Andrew Moore:

In fact one local pastor even went out of his way to go visit the tagged wall and make a blog post of his own to state that god had NOT in fact left Detroit.

The tag was never intended to be any sort of serious religious commentary, just a quick smart-assed comment about Detroit's sad state of affairs in the late-2000s. But I guess it touched a nerve with a lot of people, a poignant sentiment offhandedly expressed at a critical time. 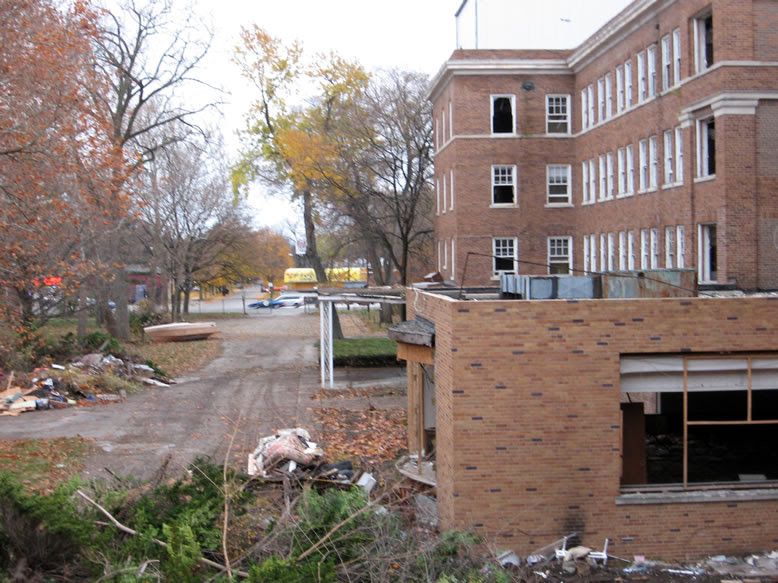 As proof of its status as one of Detroit's ghettoest abandoned buildings, here was the boat that had been been dumped out front:

Email ThisBlogThis!Share to TwitterShare to FacebookShare to Pinterest
Labels: Arnold Home for the Aged and Hospital for Incurables, Wayne County