This story proves that you can walk in the door of any old building in Detroit, and find some interesting historical factoid to report from its past. Or at least a story about a fistfight.

Since it was right in my significant other's neighborhood and we walk the dogs past here all the time, when this house at 70 Pallister Avenue was torn wide open some time ago I decided to board it back up. And, also maybe do a little exploring beforehand. Behind it you can see the empty hulk of the Hotel Seward, another historic building I explored in a different post: 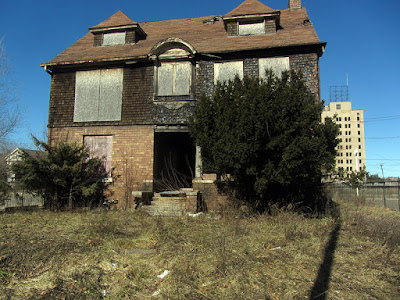 We knew that a homeless person lived or was living on the porch, but since scrappers and architectural thieves had been after the place, we figured it was important to get it sealed back up, even though it was owned by somebody. But I guess they aren't the kind of property owner that gives a damn what condition their sh*t is in, so they weren't worth bothering to contact to have a professional board-up service come out. Besides, I'd say I know a thing or two about how to keep dedicated trespassers out of a place (since I am one), and this definitely wasn't my first time boarding up an abandoned house.

The owner of this house at 70 Pallister also owns and/or inhabits the run-down house at 708 Pallister. Rumor in the neighborhood has it he has turned down reasonable offers to buy the houses, expecting somebody to come along and pay him a million bucks or something. I guess if "Midtown" eventually takes over New Center (which looks imminent), then he could get his million, but until then he's an anchor on the neighborhood.

When I first ducked inside this old place I was stunned to see how ornate the interior was; I was just expecting a regular house. And since I have a few photos now, I decided I might as well do a bit of research on the address. I was also surprised to see that the fire damage on the interior was not nearly as bad as I expected. 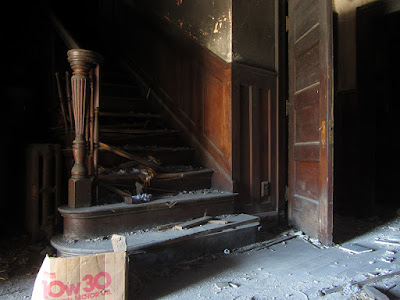 The street was probably named after Robert or his wife Sarah Pallister, local landowners in the 1890s. This house was probably built in the late 1890s or early 1900s; today it is straddled by business parking lots on both sides, and there are new condos across the street. It is an island of history in a sea of new development and vacant lots.

The Sanborn maps from 1910 show that most of the nearby lots had houses built on them by that time, and a few old mansions fronting on Woodward that no longer exist. The original (pre-1920) address of this house was 34 Pallister. Sadly the only other Sanborn maps of this area I have access to are those made in 1897, which do not cover this specific block, other than to show that it was platted but sparsely developed (if at all). 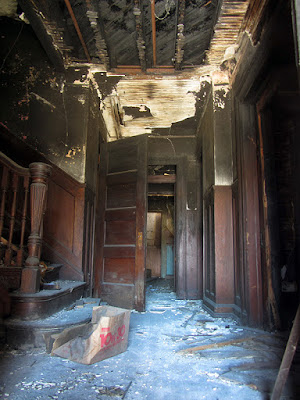 The classified section was where I found most of the references to this house, including a help-wanted ad for a servant in March of 1906: "Wanted: girl for general housework, small family, no washing, best wages to competent person." I saw in a blurb from the personals that a Miss Grace Evelyn Johnson lived there in December 1909. Since the listing was of an unmarried woman, that probably means the house was already converted from a family house into apartments by that time.

By scanning the hits for this address in the classifieds section I saw that apartments were definitely being offered for rent here in November of 1927, 1930, June of '31, November and December of 1932, through summer and fall of '34, 1935, and March of '36. 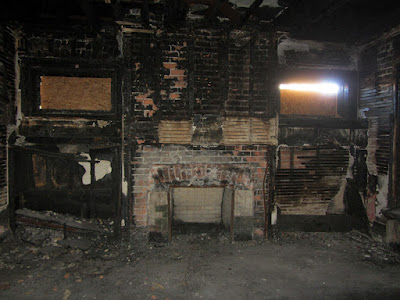 At first I thought this house was also once the residence of David E. Stott—yes, that David Stott, the real estate magnate whose father's name is on one of the city's most elegant skyscrapers—the Stott Building. But it turns out the reference I found to Mr. Stott living here was apparently a typo; he lived at 60 Pallister, nextdoor. They were quite the interesting family in the 1930s, always in the news regarding the fight over their father's estate, divorce, bankruptcy, dodging alimony payments, etc.

David Stott was one of seven heirs to their father's fortune, which the siblings all fought over in court for years. In one instance David even had his mouth busted by his brother Ernest's fist during a shareholder meeting. David was one of the victims of the Stock Market Crash, and fell on hard times, which in part drove the quarrels over their father's estate I'm sure. 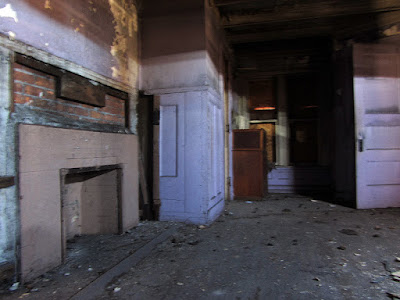 Apparently a messy divorce was also in the cards for David. He was issued a summons to appear in circuit court because he skipped an alimony payment to his ex-wife, Mrs. Isabelle A. Stott, and was apparently home but would not open the door when a process server delivered a notice that he was in contempt of court. The papers were jammed through his mail slot. Judge Ferguson later issued a body statement for Mr. Stott to be brought to Wayne County Jail. Isabelle had filed for divorce under the pretense of neglect and non-support, that all her husband's attentions were on business affairs, and not marital ones.

Six months later, Mr. Stott still had not paid any alimony, and was facing time in the Detroit House of Corrections unless he paid $1,000. He testified that he had earned only $1,250 in July 1932, and that his expenses were much greater. Judge Kilpatrick wasn't keen on Stott's "attitude," and observed that most other men coming before his bench over alimony were still able to raise the necessary sums, despite having "assets far smaller than Stott's." It was later shown that Stott's finances were in a state of ruin. 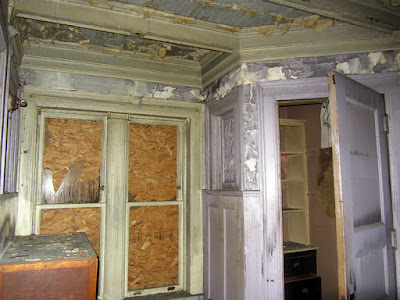 Anyway, enough gossip about the neighbors. In August of 1934 this house was offered for sale as a 12-unit rooming house (with four baths), due to a "death in family of owner," The ad declared the house to be in the "best location," and that the seller "will sacrifice on price." This same basic story played out for almost every single one of these big old grand houses from the 1890s-1900s; as the wealthy owners died off or moved to Birmingham and the Grosse Pointes, their old mansions were broken up into apartments and slowly went into decline with the rest of the inner city.

That recently deceased owner was most likely Mrs. Hazel A. Stage, who died here in May of 1934. According to the obituary section, she lived here with her husband Mr. Cecil K. Stage, a "Detroit musician." Hazel was a member of the Metropolitan United Methodist Church a few blocks away, and was superintendent of its children's classes. Her father, William Wickersham, lived with her until March 29 of the same year, when he too died here. 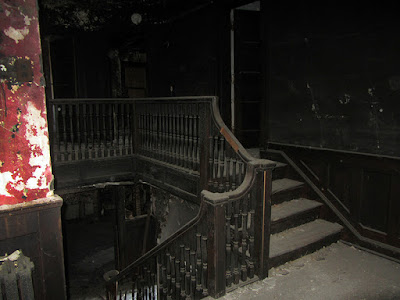 This fancy bannister was totally unexpected for a house that was such a wallflower on the outside. I originally assumed this place was built in the 1910s or 1920s like every other house in the New Center area, but this made me think it could have even dated to the 1890s. Knowing that the house at 89 Delaware Street a block away was built in 1895, it certainly isn't outside the realm of possibility. 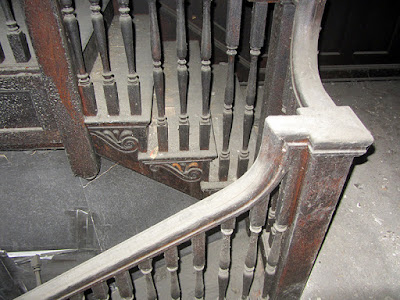 This fireplace was on the second floor, in one of the bedrooms. Almost every room had one: 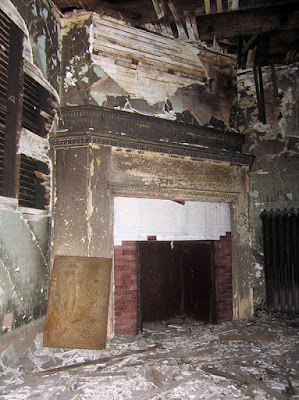 There were also a plethora of bathrooms, each one with an old clawfoot tub: 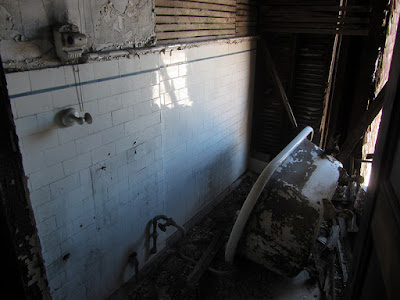 This narrow stairway near the rear of the house was undoubtedly originally built as the servant's stair, although it naturally came in handy when this house was converted into apartments. Even the attic was divided up into apartments, which were accessed by this stairway. 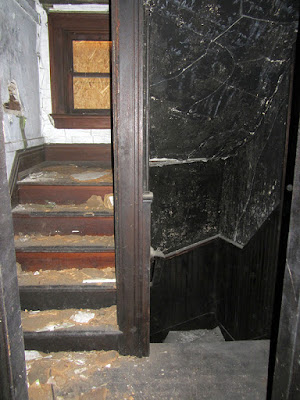 Surprisingly my searches on this house's address also pulled up a few actual news articles in addition to the classifieds...some real doozies. It doesn't get any more "Detroit" than this:

This story appeared front & center on the first page of the Free Press. The May 1939 headline read: "87-Year-Old Dukes Settle Traffic Case." The ex-boxer, George A. Foster, would have been born in 1842 or so...when Detroit was still a frontier town and Fort Wayne was being built. I couldn't find any other references to "George A. Foster" the boxer in the news. The policeman who broke up the scuffle was most likely out of the 9th Precinct Station a block away. The next day, a follow-up story came out:

Another article popped up for this address during WWII, where a reporter standing out front of the Free Press Building asked passersby the question "Can a lasting peace come out of this war?" Mr. C.H. Davies, a salesman living at 70 Pallister at the time was apparently walking past and stopped by the reporter on August 11, 1943. Mr. Davies' opinion was that yes, that the "prime movers" in the U.N. had already started laying the groundwork for the postwar period, and were carrying it out with a lasting peace "as part of the war aim."

In December 1944 another article listed 149 recent casualties of the war who lived in Michigan. According to the list, Pvt. Michael Nahabedian, husband of Vera Nahabedian, resided here at the time, but was killed in action and would never be coming back. 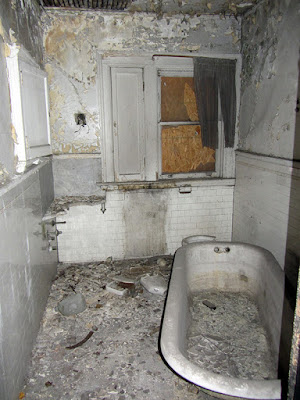 All told, well over a hundred people may have once called this house home for varying stints over the past hundred years. This was a glimpse into the lives of a few. Like any old house, some of its stories are happy and some are sad...and some are just life. Hopefully there are a few more stories left to be written for 70 Pallister. 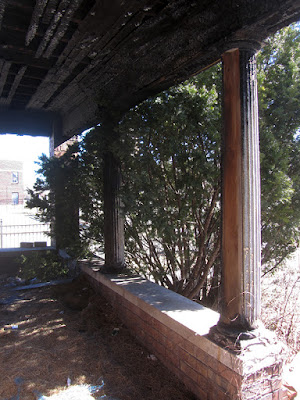 Update: I just learned from the Wayne County Treasurer's online database that the property is no longer privately owned, and is now held by the City of Detroit, with around $600 in overdue taxes outstanding.

As of May 2019 the house was demolished, and hauled away to a landfill. I am happy to report that I at least managed to salvage some material from it before it went to the landfill, including a leaded-glass window, ceramic brick, a decorative iron fireplace insert, vintage light fixtures, wooden window sashes, and some art tile. 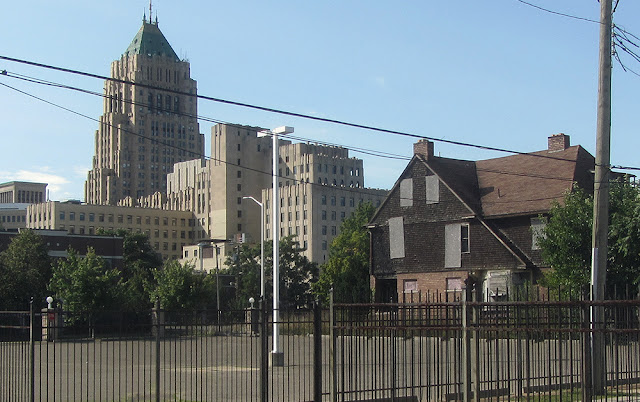