Photos from February 2008 and later.

Anyone familiar with the downtown Highland Park area would remember the Hotel Granwood. Its name probably derives from its location at 18 W. Grand Avenue & Woodward. It opened in 1927, billed as "new, modern," and every room with a bath--which was probably still fairly novel for smaller hotels. Rooms started at $9 and up for a week. The telephone number for the hotel was Longfellow 5291, and a "fine coffee shoppe" was part of the lobby. I guess they didn't have a modern nonsense term for "mixed-use development" back then, ha. 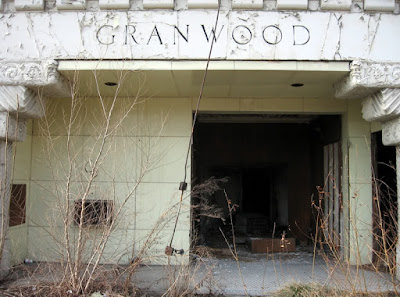 The Granwood was remodeled in 1937, which probably explains these snazzy enameled panels; according to an ad in a newspaper from the time this hotel was the "finest in Highland Park," with a bath and telephone in every room, valet, coffee shop, and "cozy lobby," all for reasonable rates. 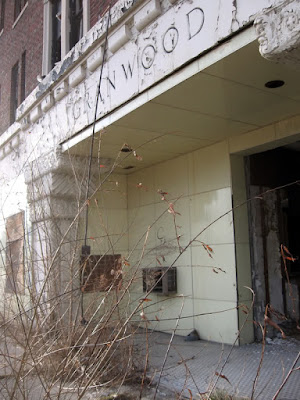 Crawly and I decided to poke our heads in here briefly to take a cursory look-see, but we didn't go past the lobby before losing interest. I was sort of in a hurry and nothing about the interior beckoned me to take more time or photos, so I just snapped some close-ups of the unique entryway and we departed. So this is going to be a really short post, but I figured I have the photos, so why not share them?

I sort of regret my haste now since the hotel did have a ballroom, which might have been photogenic; according to a lot of event notices in the Free Press, it was really popular as a meeting place for the local Lions Club and similar such groups. 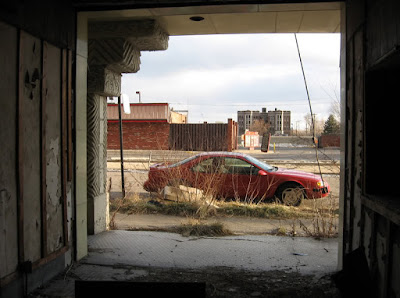 As this snippet from a legal bulletin from 1980 shows, the Granwood was not immune from the ills of the declining urban environment in that decade:

...Nor did things get any better in the following decade. A woman's partially nude body was found murdered in an abandoned house next to the Granwood in April 1992, which was a killing attributed to the infamous "Woodward Strangler." The victim was Brenda Harris, 38, who had lately been evicted from the hotel. Three other strangled women were found in the area that February, all of them victims of the Woodward Strangler. 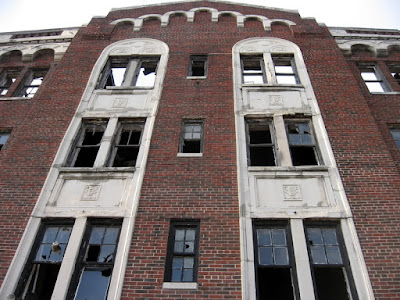 Despite my haste, I took a special interest in these little "green man" faces hidden in the corners of the entryway...they were so subtle that I almost missed them entirely: 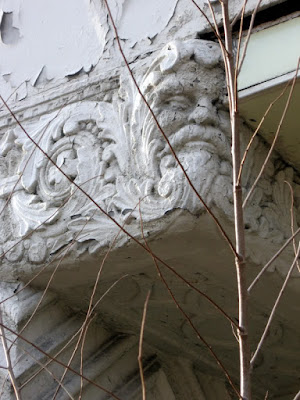 A fire started by a candle ransacked the Granwood, forcing its permanent closure in March of 2000, leaving 43 families looking for new homes. Another 14 people went to the hospital for injuries. This was how the top two floors of the building were destroyed. 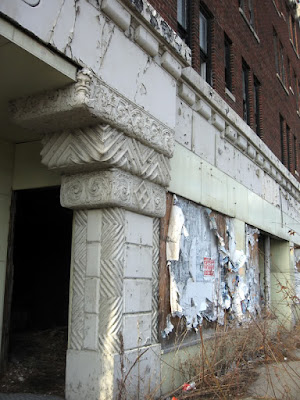 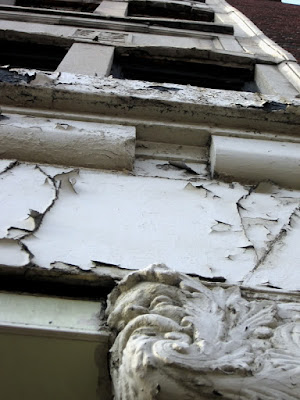 The collapsing wreck of the Granwood was finally demolished in 2013. 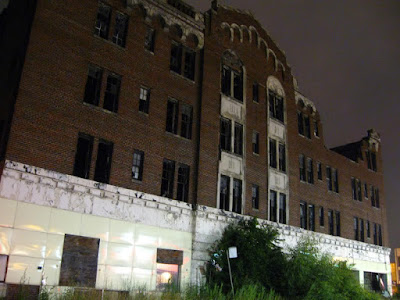 "Life is short; Art is lasting."
Or, so it ought to be, anyway. Enjoy both while you can.