The Ghost Town That Moved

Missaukee County sits in the middle of the northern half of Michigan's Lower Peninsula, and is not really one of the state's more well-known regions. It was once one of the great logging counties that contributed to Michigan's famous lumber boom, and the Christmas tree-growing capital of the U.S., but today remains a quiet hinterland where recreational hunting and fishing are enjoyed by cottagers and vacationers, away from the more touristy areas. Set off in 1840 and organized in 1871, today Missaukee County has a population of about 14,000. 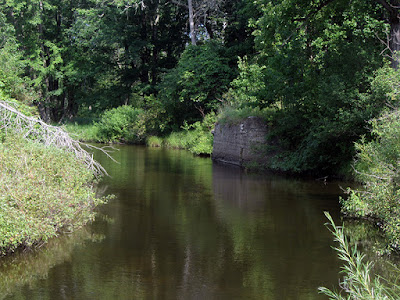 The county takes its name from Chief Mesaukee, who signed treaties at Maumee Bay in 1831 and 1833. David M. Brown's Michigan County Atlas says that (according to Virgil Vogel) the name breaks down as "missi" meaning "great," and "au-kee" meaning the land, or soil; two other authors write that the chief's name meant "large mouth of the river."

While cruising M-55 toward the "ghost town" of Jennings, an old ruined bridge footing on a branch of the Muskegon River caught my eye next to the highway bridge, so I pulled over to investigate. 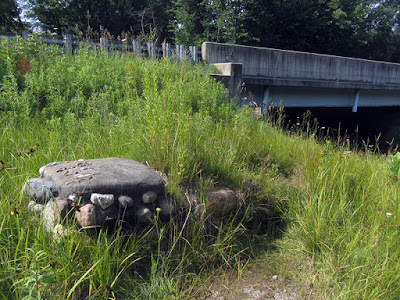 Down a fisherman's path I also found a strange cobblestone construction of some sort, which I slowly realized actually contained a spring. 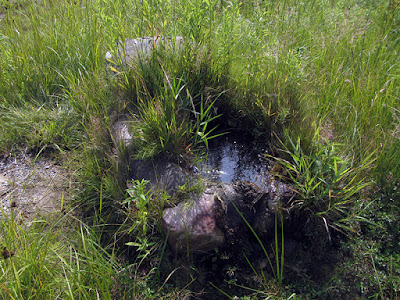 Hidden inside the grasses that had overtaken the cobblestone structure, a tiny pipe protruded, bubbling with clear cool groundwater. Hopefully Nestle won't read this post and decide to build a pumping station here to suck all our water up so they can bottle it and sell it back to us. 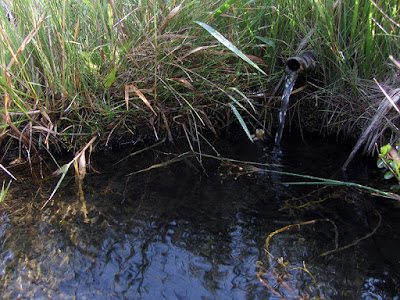 At first I thought this must've been some kind of WPA or CCC project during the Great Depression, but I noticed that someone had spelled out "1964" in stones on the top: 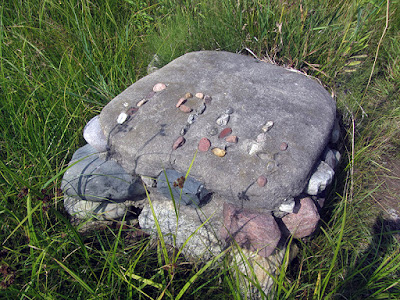 Unless I was reading it upside-down and it actually said "hqbl," which might stand for "high quality brick laying"...? I'll leave that mystery for my loyal readers to decide.

Anyway, a better look at the old bridge footing...I couldn't get much closer than this. My thought is that it was part of an old railroad trestle that once crossed this area in the olden days; Brown writes that narrow-gauge logging railroads once spiderwebbed the entire county, not counting the main freight lines. 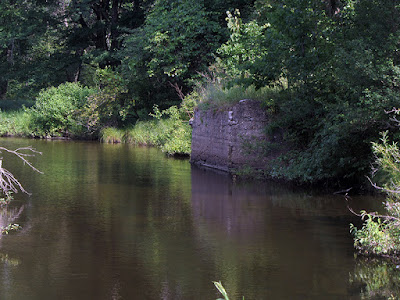 Brown says the first settler came in 1867, and the first sawmill in Missaukee County was built the same year. The future county seat, Lake City, was founded a year later. During the 1870s, Union Army veterans and loggers descended on this county to produce 100 million board feet of lumber annually, and homestead it for farming once the forest was clear-cut. The Grand Rapids & Indiana Railroad penetrated into the county by 1890, bringing all of the spoils from this timber harvest through Cadillac to Lake Michigan ports. Prior to that logs had been floated downriver to Muskegon and Manistee.

Further along in my journeys that day, I passed the remnants of what I believe to have been the old Missaukee County Poorhouse: 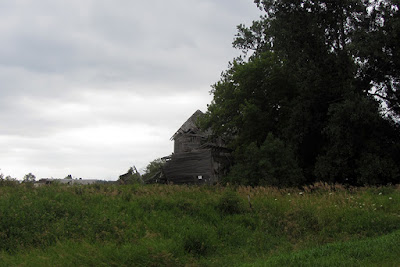 Deciding quickly that accessing it would be rather inauspicious, I was obliged to skip it for today and settle for this in-motion snapshot, as I continued along toward Jennings.

Just outside of town I pulled over again to patronize this quaint Victorian house turned bait & beer store: 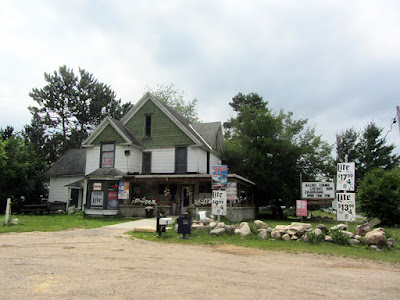 Another roadside ghost along M-55: 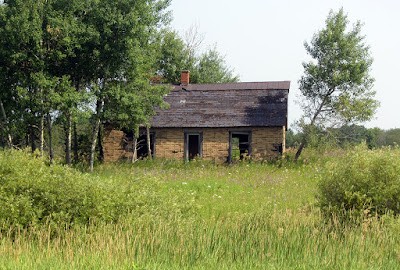 There are a few nice-sized lakes in Missaukee County, including Sapphire Lake... 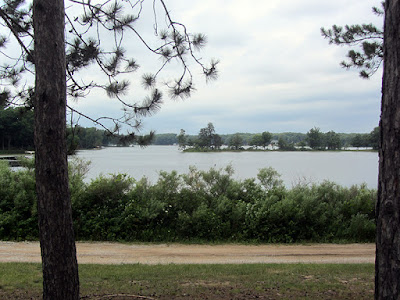 ...and Crooked Lake, along whose shores Jennings was built: 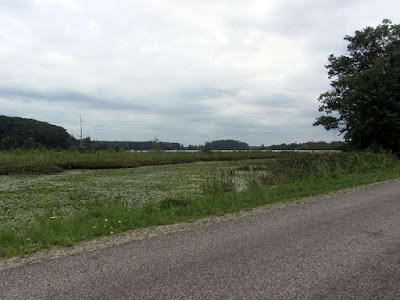 Entering the town of Jennings by the main road, like many "ghost towns" it appears little different from any other rural northern Michigan village: 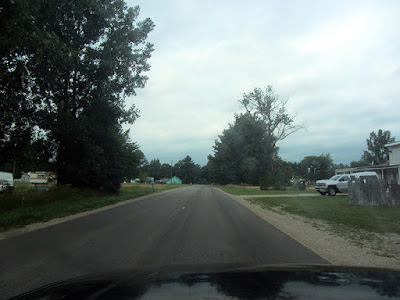 The only real difference to be seen is that there are a lot of vacant plots where houses used to be, and the occasional vacant one.

It is generally agreed that except for Au Sable, Jennings is the largest community in Michigan ever to have become a ghost town...I assume in this context that the definition of "becoming" a ghost town means that the post office closes and local government dissolves; in which case cities like Detroit and Calumet don't count as ghost towns, although many observers may find grounds to disagree. 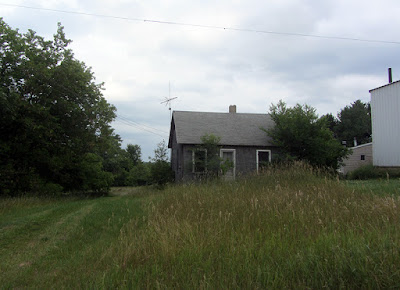 Many of the houses here retain their original Victorian-era appearance...a few mobile homes are interspersed amongst them too. 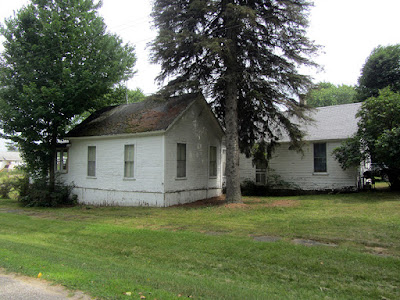 The story of Jennings began when William and James Dewings erected a sawmill on Crooked Lake in 1878, which was also the name of the settlement at that time. The Dewings brothers were said to have been the first in Michigan (and maybe in the nation, according to Wakefield) to introduce the double-cut bandsaw in their mill. The mill was subsequently bought by Austin and William Mitchell in 1882, who then renamed the village supposedly in honor of William Jennings Bryan (their favorite presidential candidate), although this origin is debated.

The Jennings post office opened the following year, in 1883, but Roy L. Dodge, author of Michigan Ghost Towns, claims that it was originally called "Round Lake" and "Mitchell," and was not renamed "Jennings" until 1890. The Mitchell brothers also enlarged the Dewings mill for planing, flooring, and shingles. It employed 600 men, and ran six days a week, 24 hours a day. The mill was served by the Jennings & Northeastern Railroad, a branch of the G.R. & I. 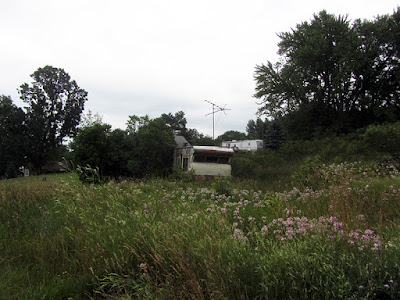 Larry Wakefield, author of Ghost Towns of Michigan, notes that Jennings at its peak included a hotel, town hall, livery, saloon and pool hall, school, and four churches. Only one of the churches remains today, everything else is gone. Jennings was mostly occupied in the beginning by Finns who worked in the mills, while Swedes and Norwegians worked in the forests swinging the axe. The Finns stayed in Jennings, Wakefield writes, but the lumberjacks were transient and moved on. 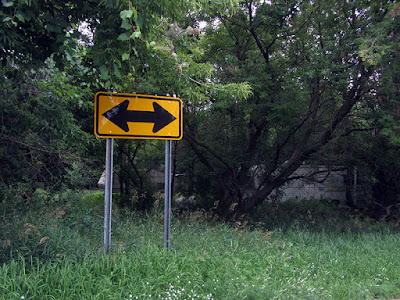 As I spent a little more time wandering the backstreets of this village, I noticed a few spots that definitely seemed a little more "ghost-towny," like this street sign for an intersection that was now really almost imperceptible: 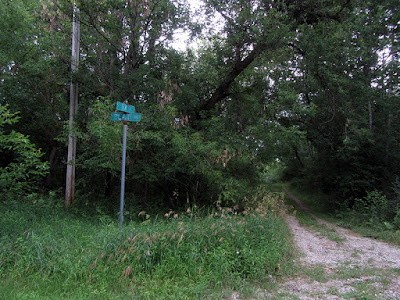 The Cummer-Diggins Co. of Cadillac built a chemical plant here on the north edge of town during the mid-1880s, utilizing wood byproducts (from the aforementioned sawmill I presume). According to Gene Scott, author of Michigan Shadow Towns, the Mitchell mill shipped 22 train car loads of milled lumber per day in 1890. Scott wrote that the Cummer-Diggins chemical plant processed wood alcohol, acetate of lime, and other such chemical byproducts of trees for making paint, gunpowder, explosives, charcoal, and acid used as a food preservative.

Dodge writes that after extracting the desired chemicals from the wood, the plant reduced it to charcoal, which was shipped to iron smelters around Lake Michigan, such as those at Fayette, Elberta, and East Jordan. They blithely dumped their residual tars and other chemical wastes into Crooked Lake...which required a major cleanup effort by the next generation, at public taxpayer expense. 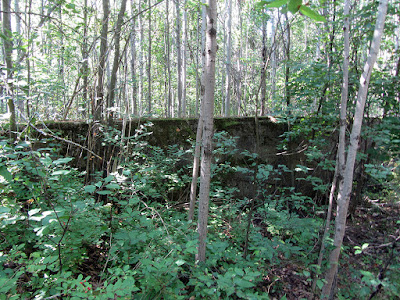 I'm not sure if these moss-covered ruins were part of the Cummer-Diggins chemical plant or the Mitchell flooring mill; chances are they were both adjacent to each other on the lakefront. 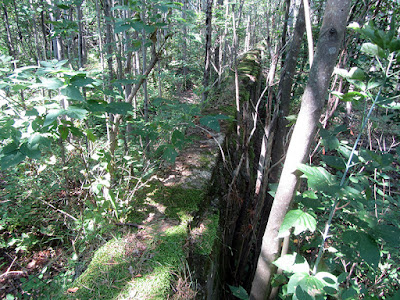 Brown says the population of Jennings peaked in the 1890s at 2,000 people, but those numbers dwindled to 500 as logging waned by 1905. Scott says the hardwood and cedar mills started running again after 1917 during the World War, providing a brief period of economic recovery for Jennings. The population jumped back up from 450 in 1910, to 1,200 in 1917—but again, it was brief. In the early 1920s the Cummer-Diggins chemical plant closed and was dismantled. The sawmill went the same way in 1922. 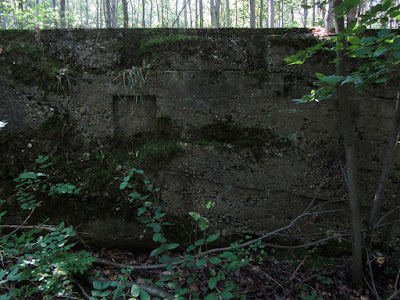 By the Great Depression, only 40 people remained in the shell of what had been the 2,000-person town. Ice harvest was also a big business in Jennings, thanks again to the lake, but it wasn't enough to support the whole town after the timber business was gone.

Being a company town, the Mitchell brothers owned most of the homes, and had 70 of the "finest" ones moved to Cadillac, leaving behind all the empty lots, and starting Jennings' reputation as one of Michigan's best-known "ghost" towns. The sawmill equipment was likewise sent to the Upper Peninsula, where the Mitchells opened a new mill at Sault Ste. Marie, according to Larry Wakefield. 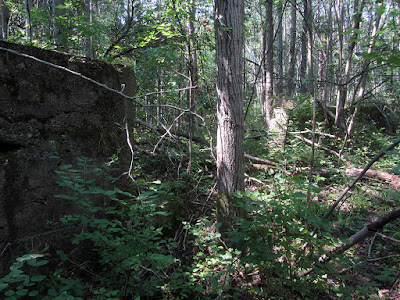 Gene Scott writes that the house-moving from Jennings to Cadillac (10 miles away) was a bargain promotion by real-estate men in Cadillac, which resulted in the road being widened or improved, and even made national headlines because some residents rode inside the homes while they were being moved. I think there was an episode of The Addams Family where that happened...? I recall a line where Morticia Addams was saying, "It's not every day you see a stately mansion rolling down Main Street."

Anyway, about 400 of the company houses in Jennings were less than 30 years old at the time, prompting the move. Like ghosts from the past, many of them can still be seen today, on Granite Street in the south end of Cadillac. 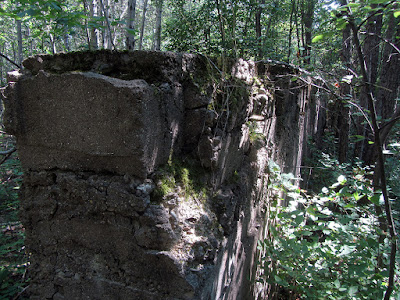 In the aftermath of the move, a Chicago developer tried to put a large resort here on the shore of Crooked Lake in 1929, but the Stock Market Crash killed the idea—and he then killed himself, Scott writes. Not to mention the fact that the lake was still hideously polluted from the mills anyway. 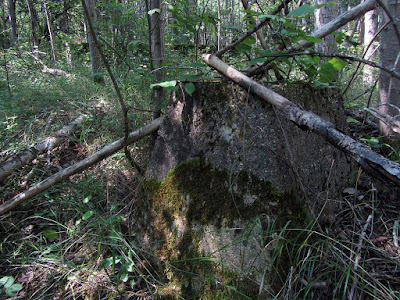 And just like in the ghost town of Deward, which I explored in an older post, there are odd trenches running through the woods in this area from when the famished remaining residents of the town dug up the mill's lead water pipes for scrap during the Great Depression so they could get a little money to eat, Wakefield explains. 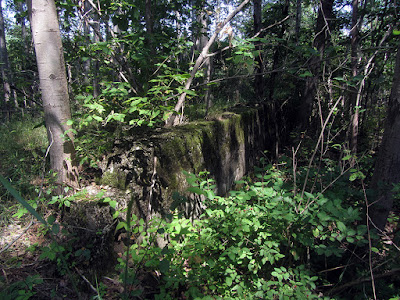 The Jennings post office closed in 1956 when reportedly no suitable candidate could be found in town to act as postmaster. Despite its precipitous decline, Jennings continued to serve as an occasional place for descendants of former residents to regroup during periods of joblessness Scott writes, since the old family homesteads still stood and were paid off long ago. It was sort of "rediscovered" in the 1990s as a cheap place to live, which might explain some of the trailer homes. 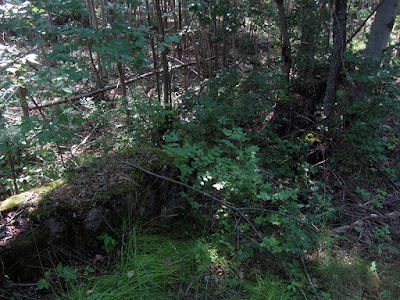 According to Dodge, there have been at least 26 post offices in Missaukee County's history; only four remained by 1970.