According to historians Gene Scott and David M. Brown, Clare County was originally set off in 1840 as Kaykakee County (which means "pigeon hawk," after the name of a Sault Chippewa chief). It was renamed Clare in 1843 after a county in Ireland, which was then badly affected by "The Great Hunger" and acute overpopulation, driving a mass exodus of immigrants to places like Michigan. Coincidentally the fledgling state of Michigan was also looking for a horde of fresh voting-age settlers just at that exact moment—it stands to reason that the name change was designed to entice newly arrived Irishmen into the cut-over pine barrens that had previously been a tough sell for prospective farmers. Eventually things worked out however, and farming succeeded where the Anishinaabeg tribes once hunted. 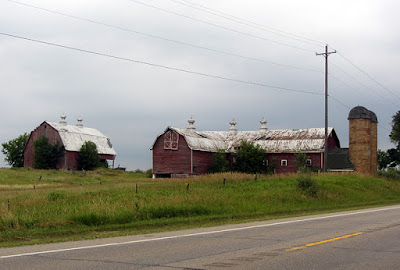 I have spent a lot of time putzing around Clare County over the years, since I attended Central Michigan University in the early 2000s, and had a good friend who lived in the Clare area. I also used to frequent Jay's Sporting Goods and General Jim's Surplus in those days, almost as if they were a house of worship.

Here is what looks to be another of the many abandoned schoolhouses that dot Michigan's countryside. This one was on the eastern edge of the county, but I can't recall exactly where: 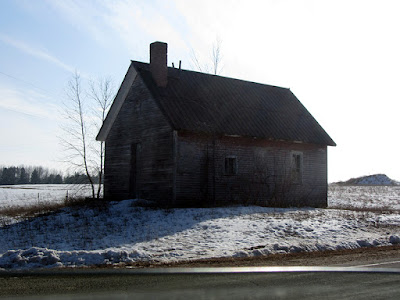 According to a book I have called Michigan's Heartland, there were 60 school buildings in Clare County in the 1900s: 38 of them were standard wooden-frame, ten were brick, six were stone, and the last six were of "other types," probably log cabin style.

According to author Roy L. Dodge Clare County once had 29 post offices, but only a scant five of them remained in operation by the 1970s—reflecting the population loss since the lumber boom days, and the death of family-owned farming in general. 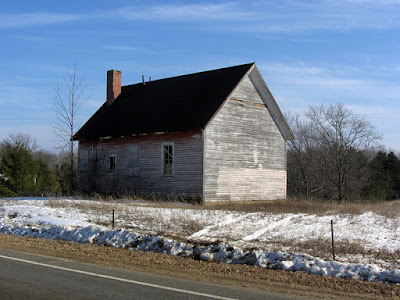 But perhaps the most noteworthy ruin in all of Clare County is this unassuming site at the corner of highway M-61 and US-27 near Harrison—once the location of one of Michigan's first tourist traps, which has gone into the annals of our state history as "Spikehorn’s Bear and Deer Park": 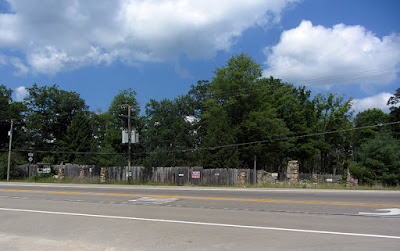 Clare County was home to John “Spikehorn” Meyers, who was undeniably one of Michigan's "most colorful characters." He was described as a showman, naturalist, politician, coal miner, tile manufacturer, furniture builder, inventor, realtor, bear hunter, lumberjack—and above all, individualist. He established this petting zoo of sorts in about 1930, where the premise literally was that you can interact with actual live bears.

With his friend Red Eagle, Spikehorn entertained tourists with bear-related antics and stories of their adventures in the woods. Nowadays I don't think you will find too many bears in Clare County, but it certainly does still have quite a bit of forest. 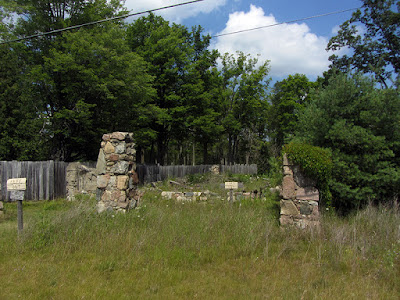 His long white hair and beard made him look like Rip Van Winkel, but Spikehorn was quite the maverick, apparently. He was constantly engaged in legal battles with the Michigan Department of Natural Resources due to the fact that he kept wild animals as pets, and exposed the public to them. And yes, sometimes people got chomped or clawed by his bears.


Spikehorn's love for the DNR was indicated by one of the signs in his yard, which said, “Feed Conservation Officers to the Bear.” Here is a historic photo showing what Spikehorn's Bear and Deer Park looked like shortly after it closed in the 1950s...notice the old Vernor's sign on the fence:

An article on the website of local radio station WFMK goes on,


The sign out front of this wildlife refuge read "Only bear den in the world that visitors are allowed to shake hands with bear" and many did, adults and kids alike. Was anyone mauled? Of course. But keep in mind, Spikehorn was doing this as far back as the 1930s and up to the 1950s, WAYYY before people became sue-crazy and afraid of EVERYthing. 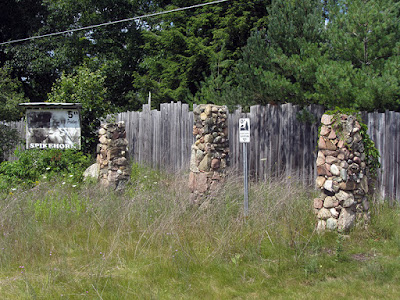 Spikehorn's Den burned down in 1957, and the man himself passed away two years later in nearby Gladwin County. Another historic photo, with him posing out front:

Apparently there is still some sort of billboard hanging up here, which shows Spikehorn in all his bearded glory, hand-feeding one of his bear cubs: 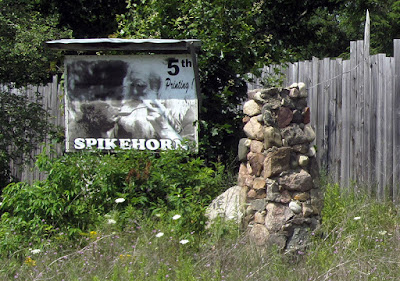 Whatever is hidden behind the wooden fence I don't know, but I got the feeling it was now someone's yard. 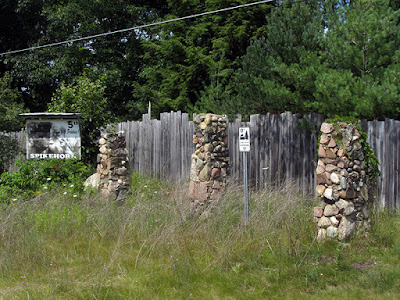 I recall that Michigan History Magazine had a good article about Spikehorn a few years ago (wish I could find my copy), but today these stone pillars are all that remain to remind us of this unique character's imprint on the history of Michigan tourism. 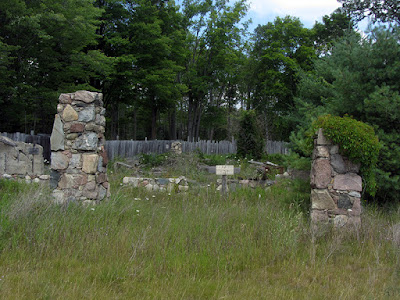 In the southwestern corner of the county, near the town of Lake, I found the abandoned Lake Station Coaling Tower. You may remember my older posts about the coaling towers in Lansing and New Buffalo, which are essentially relics from the Steam Age of railroading, once used to refuel locomotives. Sometimes they are also called a "coal tipple." 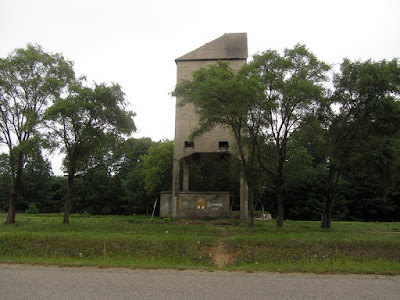 A small informational sign was placed here recently, after a site cleanup was done in 2016 by the Clare County Historical Society, through a partnership with Garfield Township, the Michigan DNR, Friends of Clare County Parks & Recreation (and others), so it appears that they intend to keep it around. I always love it when I see communities embracing their ruins instead of treating their own history as some sort of blemish, or embarrassment that should be barricaded or removed. Kudos to you, Clare County! 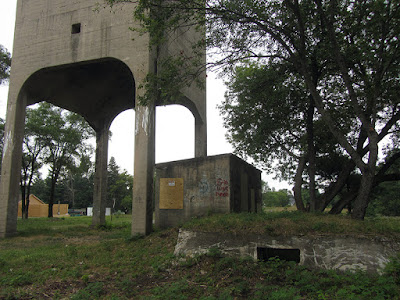 Anyway, built in 1929 for steam trains on the line running between Saginaw and Ludington (which are ports on Lake Huron and Lake Michigan, respectively) the Lake Station Coaling Tower is 68 feet tall and holds 250 tons, or six railroad cars worth of coal fuel. Coal was loaded into the tower via a motorized conveyor system (from a receiving bin under the tracks), then dispensed by gravity through the chute into a waiting locomotive tender. I imagine that's what the smaller structure next to it was for—housing the engine that drives the conveyor. 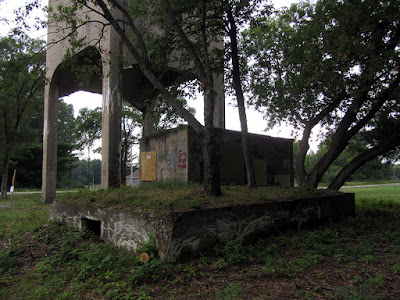 By the 1940s and '50s diesel locomotives made towers like this obsolete, and they were stripped of salvageable metals, and abandoned. According to a blurb in the Fall 2017 issue of Chronicle, there were only 15 coaling towers still standing in Michigan, and only two were accessible to the public (the other is in Grand Haven). The former railroad bed itself has also been turned into a bike trail, like many others in the state, so it is pretty easy to come and see this thing. 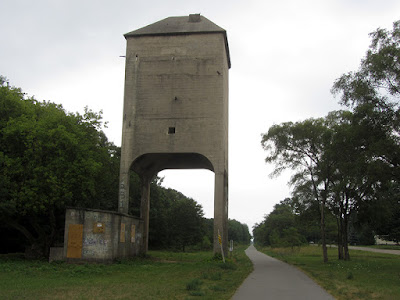 Clare County was notoriously wild and lawless during the logging heyday between 1870 and 1900; it was the "wild west" before the Wild West was even the wild west. The narrow-gauge Lake George & Muskegon Railroad was completed in 1877 and ushered in the era of year-round logging activity in Clare County, even during winter when the rivers were frozen and logs couldn't be floated to mill and port. It was heralded as the world's first logging railroad (although this distinction actually belongs to the Glencoe, Pinconning & Lakeshore Railroad in Bay County). It is also claimed—with more authority—that Clare County has more miles of old narrow-gauge logging railroad trackage than any other Michigan county. 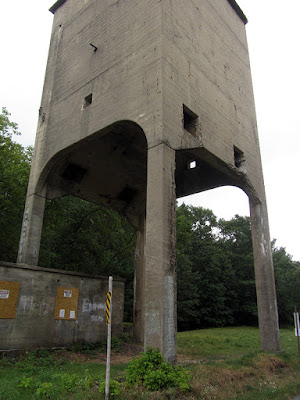 After the fires and desolation that resulted from uncontrolled logging activities, A.J. Doherty, one of Clare's leading citizens, helped lead the charge to initiate state regulations to prevent wildfires, through responsible forestry instead of just letting tycoons come through and annihilate vast tracts of wilderness for their own profit, while leaving the slash behind as a fire hazard. Today, with much of its natural beauty restored, Clare County is one of Michigan's most successful recreation and tourism counties. Keep that in mind next time some sleazy politician tries to convince us that loosening "red tape" environmental regulations is necessary "to improve the economy and help big business create jobs"... 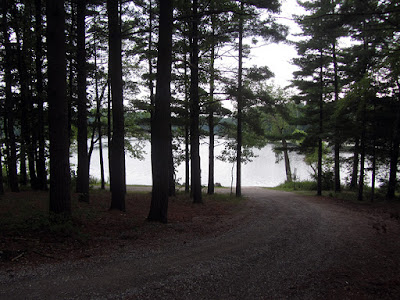 And here is the lake that Lake Station is named after...there's a campsite here too. It is called Crooked Lake, which was also the original name of the town, before it was shortened in 1909 to just "Lake." 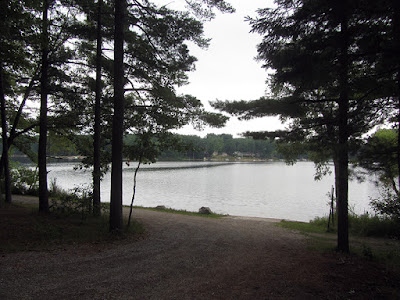 According to David M. Brown's Michigan County Atlas, Lake Station / Crooked Lake began as a settlement in 1877, as a station on the Flint & Pere Marquette Railroad. So I imagine if you took that bike path from here, you would eventually end up in Flint. 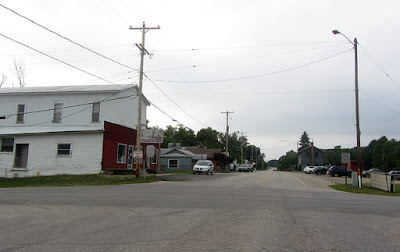 There used to be large sawmills around the lakes in the vicinity, but now Lake is a resort town, according to Brown built mostly after 1950, atop the foundations of the original settlement. 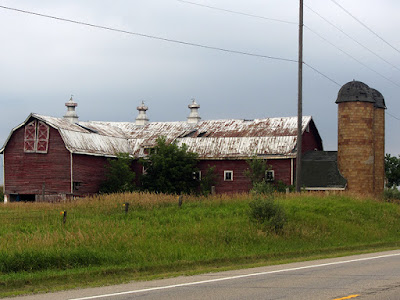 Following US-10 away from Lake Station past Farwell and towards Clare (the largest town in Clare County), we cross paths with the old F & PM Railroad yet again: 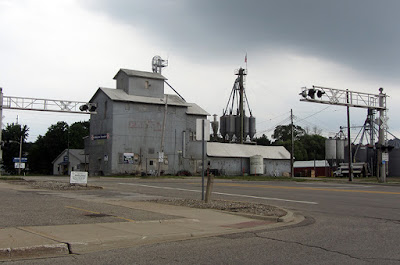 And here is the famed Doherty Hotel, still operating after all these years, whose prominent founder I just mentioned: 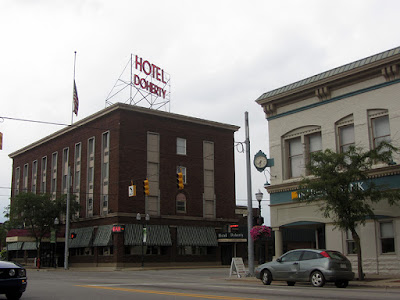 During Prohibition the Doherty Hotel was one of the more well known up-north hangouts of the infamous Purple Gang from Detroit, and there was a secret tunnel from its basement to the bank across the street. 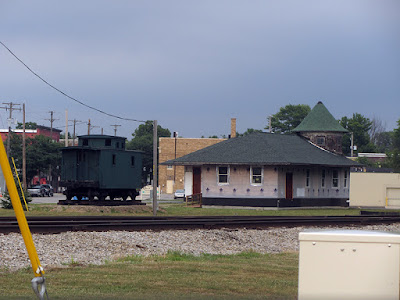 I mentioned earlier that I had a friend who lived in and around Clare, and I once explored the former Frostbite Ice Cream factory in downtown Clare with him, but sadly I did not have my camera with me that time. There is also the old F & PM Clare Depot, which had sat abandoned for many years but it's another one I missed out on since renovations started on it during my last visit. I wish I could find my friend's photos from exploring the inside, circa early-2000s. Sadly, I lost contact with him, too. 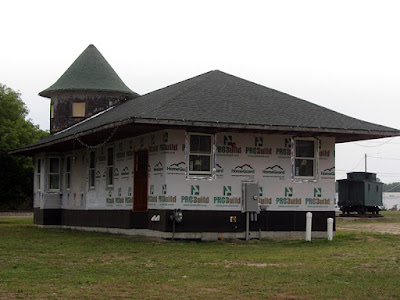