A Unique Snow Flake, and the Highway of the Red Arrow

Out of all the abandoned motels in Michigan, the Snow Flake Motel at 3822 Red Arrow Highway in St. Joseph stood apart from the crowd by virtue of the fact that it claimed the pedigree of being a rumored Frank Lloyd Wright-designed structure, which in the architectural world is typically worth its weight in gold. I personally dislike both motels and Frank Lloyd Wright structures—abandoned or otherwise—but something about the Snow Flake was appealing, and it hit me the first time I saw it on Google Maps from above. 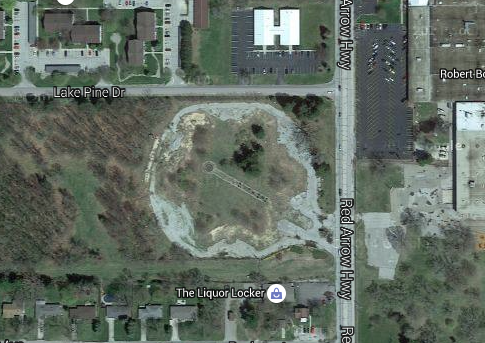 I figured this place was definitely worth checking out if I ever made it out that way, but sadly it was torn down long before I got that chance. Its ruined snowflake-shaped outline however is still discernible even after demolition, so I decided to go see what was left. In fact I ended up camping in my truck there one night while on a road trip through southwestern Michigan, and waited for dawn to see the ruins. 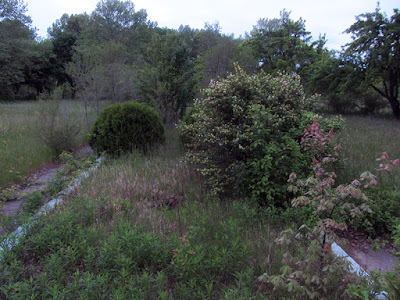 The Michigan city of St. Joseph in Berrien County has long served as a weekend-getaway town for FCPs (Fuckin' Chicago People), and the Snow Flake was opened near Lake Michigan in 1962 to cater to that market. According to Buildings of Michigan by Kathryn Bishop Eckert, it was designed in 1960 and cost $1 million to build.

There are some good photos of the Snow Flake Motel in its prime at motel-register.com, which also has a good writeup of its history. Commissioned by Sahag Sarkisian "at the height of Wright’s influence and popularity," the motel "promised to be the most luxurious accommodations in St. Joseph." There was a total of 57 rooms, 17 of which had built-in fixtures. Each room came equipped with color TVs however, and even their own ice makers—perhaps a little pun there on the snowflake theme. There was also a cocktail lounge, called the "Flake." Eckert writes that a rectangular pond with jet fountains connected two hexagonal swimming pools in the courtyard. 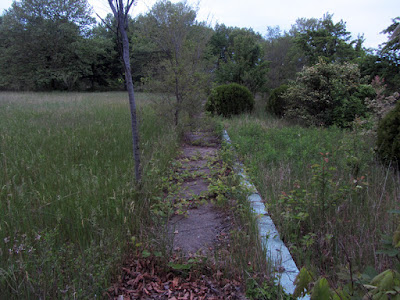 An article in The Believer by Suzanne Snider gives some more background on the Snow Flake. It was mainly designed not by Frank Lloyd Wright himself, but by the "shadowy" William Wesley Peters—Wright’s apprentice and son-in-law—about whom comparatively little is known. Peters worked with Wright quite a bit, and he was even the one who made the engineering calculations for Wright’s famous "Fallingwater" house and the Guggenheim Museum.

The Snow Flake was also one of the last commissions that Frank Lloyd Wright ever worked on before his death. According to Snider's article, William Peters was wedded to Wright's adopted daughter, who later died in a car accident. Peters subsequently took a second wife—the daughter of Russian dictator Joseph Stalin, no less. 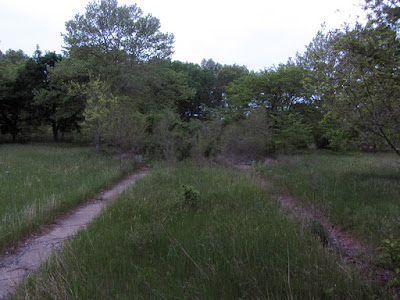 Motel-register goes on to say that despite its eccentric theme the Snow Flake was functionally the same as any other motel—it had rows of units enclosing a courtyard, all accessible from the outside. "In some sense," it goes on, "motels are the opposite of snowflakes: homogeneity is their defining characteristic." But the Snow Flake was a little extraordinary.


...the 1960s were the height of motel culture in the United States, and the idea that one could create a bonafide destination out of a truly unique bit of architecture wasn’t so far fetched.

This was a time when the road signified not just the American dream of freedom and mobility, but also economic power and technological prowess. If the highway promised opportunity and adventure, the vehicle that propelled such exploration was the product of American ingenuity and determination. That the world’s most architecturally significant motel was built in Michigan is completely fitting given the crucial role the state played in fostering road culture.

But just like a snowflake this unique motel's lifespan was to be fleeting, and it soon melted away. The article says that because it was an unconventional, almost experimental design, its popularity soon faded once the novelty wore off. Message board posts at savewright.org indicate that the motel's Douglas Fir-plank roof was also literally the ceiling of the rooms, and the heating units were inadequate for the space, so I can only imagine that there were more than a few snowflake-related euphemisms and epithets hurled against the motel's pedigree back in the day because of drafty conditions in wintertime. 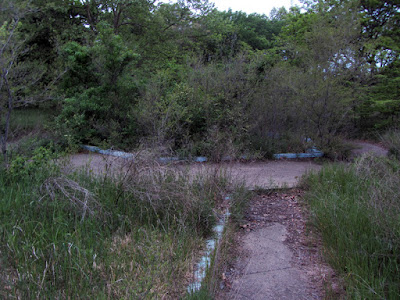 According to roadarch.com, the Snow Flake was added to the National Historic Register in 1998, and was bought by a Mr. Patel who had plans to restore its glory but ran into roadblocks and gave up. It was torn down by early 2007. Supposedly the snowflake-themed front gates were sold off, so they are probably still out there somewhere. Some more good photos of the Snow Flake while it was abandoned can be found at roadarch.com, flickr.com, and lighthousepictures.net. 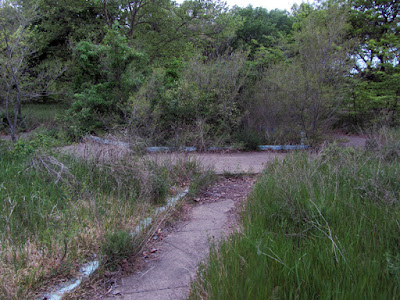 From St. Joseph / Benton Harbor I continued along the historic Red Arrow Highway down to New Buffalo. The highway was started in 1911 as part of a strategy to bring auto tourists from Chicago to Michigan, and eventually stretched from New Buffalo to Mackinaw City.

At the end of an older post I showed and talked about the Grand Trunk Railroad coaling tower in Lansing. In New Buffalo there is the still-standing relic of the Pere Marquette Railroad's coaling tower. It was standing next to a railroad museum actually: 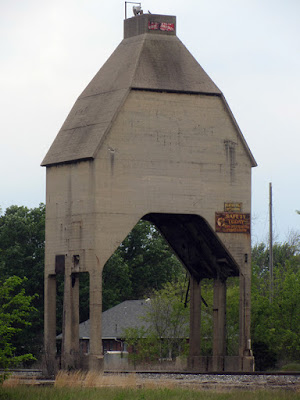 According to michiganrailroads.com, this coaling dock was built in 1942 and only used until about 1956 when steam locomotives went out of general use in Michigan. It held 250 tons of coal which was dropped to locomotive tenders on the tracks below, via two chutes. Coal was raised from the storage bin below by an electric conveyor.

Here's a closer view of the vintage signs on it: 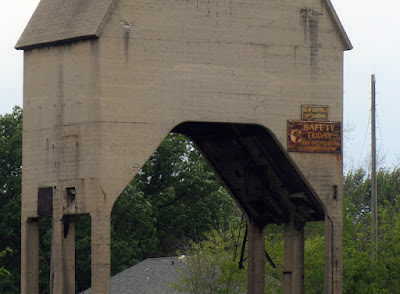 The small sign on top simply says "NEW BUFFALO, MICHIGAN," while the one below it with the Chessie System logo on it says, "SAFETY TODAY—YOUR INVESTMENT FOR TOMORROW."

Up on top was another sign indicating that the tower was designed and built by the Roberts-Schaefer Co. of Chicago: 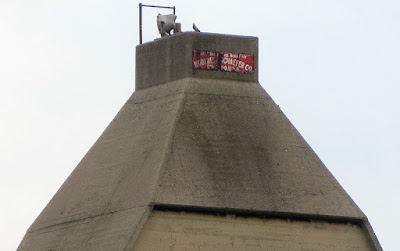 The reason I was passing through New Buffalo is because I wanted to visit Michigan's southwesternmost corner, where the Indiana-Michigan state line hits the shore of Lake Michigan. So here we transition from one incredibly nerdy and eclectic topic to another.

This street in the hoity-toity border town of Michiana follows the state line, as it comes down a hill to the beach: 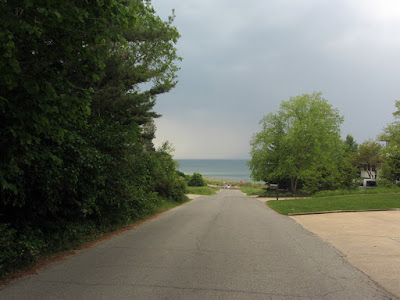 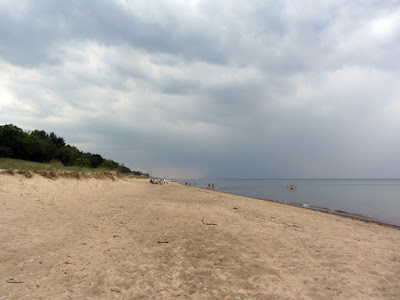 And now that I've been here, all I have to do is post up my visit to the remote westernmost corner of the state, and I can say "I've been to every corner of Michigan."