Habitation on the Chain of Lakes

Northwestern lower Michigan's Antrim County was set off as Meegesee County in 1840, named by Henry R. Schoolcraft (probably meaning mgizii, or "eagle") after an Ojibwe chief. It was renamed Antrim in 1863 (after County Antrim, Northern Ireland), when it was organized. 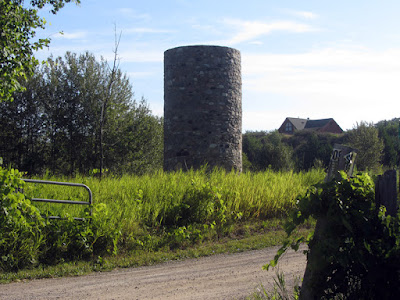 Information at irishtimes.com and ulsterplacenames.org indicates that the etymology of Antrim County's name is well-suited; in Gaelic, Aontroim means "lone ridge" or "single ridge," which could refer to the long narrow strip of land between the lakes. There is also its strangely similar ancient name, Endruim, which is equally fitting and means "habitation on the waters."

Again, Antrim County is one of Michigan's four "Irish" counties, set off during the Great Hunger when many were escaping the Emerald Isle for these more promising shores. They are Antrim, Roscommon, Clare, and Wexford, though it is arguable that Emmet County could also be included in the list. 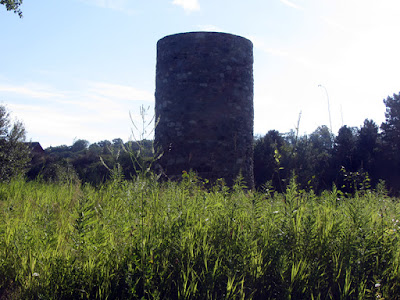 I assume this stone ruin was once a farm silo...but it seems to fancifully resemble some ruined medieval watchtower just as well. It stands along the scenic Old Dixie Highway, at Glenbeigh Lane.

This area was already busy with fur trading as early as the 1600s, but according to the Michigan County Atlas by David M. Brown, the first settlers were two Presbyterian missionaries from the Straits area, who set up camp at the mouth of the Elk River in 1839. At Elk Rapids the Dexter & Noble Co. started operating a sawmill in the 1860s, and by 1870 they had turned the county into their empire, which they dominated for 60 years--owning most of the sawmills, hotels, steamboat runs, a company store, a large charcoal blast furnace, and thousands of acres of lakeshore timberlands. 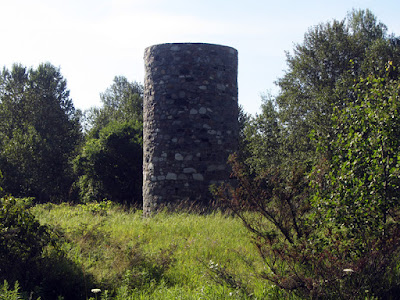 Antrim County's interior was not developed until the Grand Rapids & Indiana Railroad came through. After the logging subsided the county became notable for golf and ski resorts, orchards, and the beauty of its 100-mile "Chain of Lakes." Roy L. Dodge writes that Torch Lake was once called "the sixth most beautiful lake in the world."

Just in case you were keeping track. 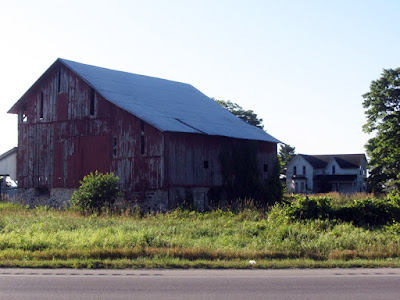 Old farms dot the countryside, as this is part of Michigan's renowned cherry belt. But as logging declined across the state, so too has the number of farmers eventually dwindled, leaving many classic old farmhouses and barns abandoned.

In his book Michigan Ghost Towns of the Lower Peninsula, Roy L. Dodge notes that there were 24 post offices at Antrim County's population peak, but only eight remained when he was writing in 1971. 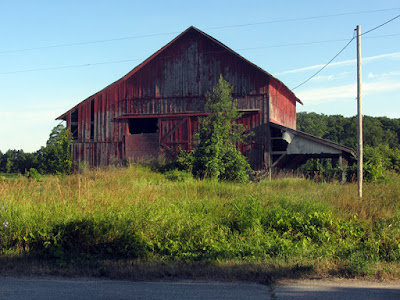 Despite the county's Irish namesake, the Cairn Highway that runs along its coastline between Lake Michigan and the Chain of Lakes was not named because it was the site of ancient Celtic burial monuments--it was named after a pyramid-shaped stone cairn erected in 1938 to honor Michigan's "Dean of Tourist Activity," Hugh J. Gray. According to roadsideamerica.com, it was constructed of 83 stones, one from each of Michigan's 83 counties, and marks the 45th Parallel, halfway between the North Pole and the Equator.

If it wasn't for the birth of the Michigan tourist industry right after the state's natural resources were all extracted we would hardly have an economy left at all, and no one would be curious about the histories of otherwise obscure places like Antrim County. 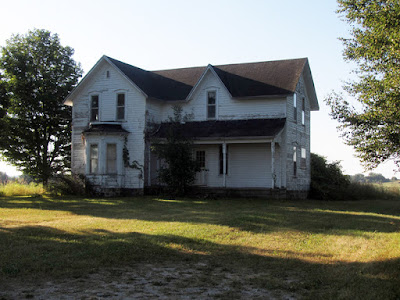 The town of Elk Rapids is the county's largest population center, and it sits on the Elk River, where it empties into Grand Traverse Bay. Here is a view across the bay to the Old Mission Peninsula: 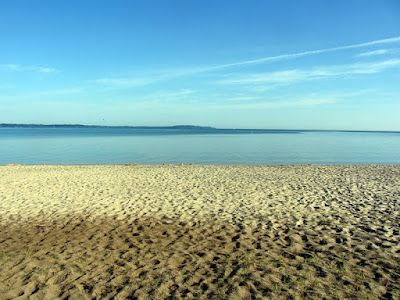 I briefly stopped at the historic "Island House" downtown, and noticed this old dam ruin in the river oxbow: 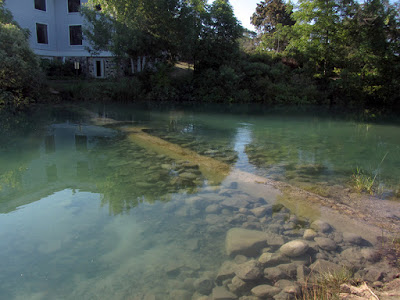 Edwin S. Noble, a partner of the aforementioned Dexter-Noble Co. (later known as the Elk Rapids Iron Co.), built this island and the house on it for himself in 1865. I assume that the concrete dam was part of that project, or came later as an improvement.

On Ames Street east of US-31, there is the last remaining ruin of the Elk Rapids Iron Co. furnace, overshadowed by the new waterfront development that has replaced the once extensive industrial site.  Somehow I missed this important ruin during my visit. A state historical marker stands nearby reminding passersby that during the 1870s this was one of the nation's greatest producers of charcoal iron, smelted from ore coming out of the Upper Peninsula. It was the largest charcoal furnace site in the United States, standing 47 feet high and 12 feet in diameter, and first fired on June 24, 1873. There were 51 kilns on the site, according to one article. The furnace was the town's principal industry, but it shut down during World War I when the supply of local timber was used up, and more efficient smelting methods came into use. 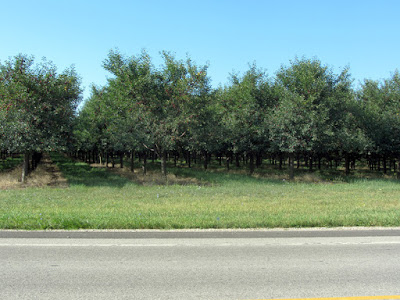 Back up into the countryside I headed, through endless cherry orchards. 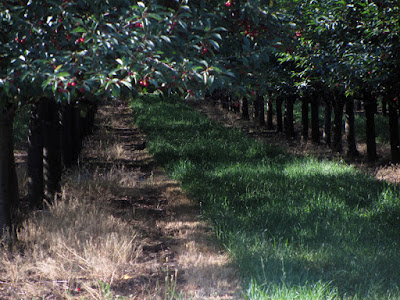 One of the ruins I had marked on my itinerary was the old Stover Dam, on the Cedar River. I could not find it without blatantly trespassing in someone's yard, but I noticed something else interesting. A nature trail led into the woods nearby that used to be an old railroad, and a historical sign stood at the river crossing where an old wooden trestle of the East Jordan & Southern Railroad once spanned the Cedar. 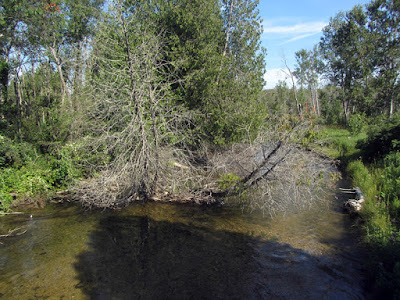 Unfortunately the original 100-year-old trestle was replaced with a modern one in 2003 as part of the "Rails-to-Trails" project, but I could still see an old steel rail and what looked to be an original timber jutting out of the embankment however: 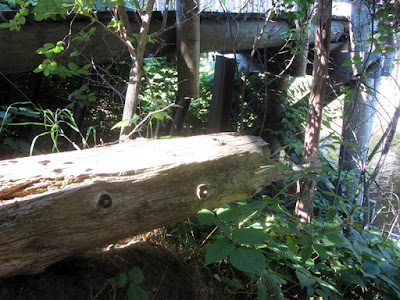 EJ&S operated this line frequently in the 1900s between East Jordan and Bellaire, the sign said. It was built as a more efficient route for getting logs harvested in the northern end of the county to the mills, but there was also passenger service. EJ&S was another railroad that earned itself a derogatory alternate name, as folks in Bellaire apparently used to call it "Every Journey a Struggle."

After WWII freight traffic along this rail line dried up as shipping was switching to trucks, but the EJ&S clung to life as a tourist attraction called the Swan City Express, where visitors could ride a real steam train like in the olden days, and watch reenacted train robberies by gun-wielding bandits--apparently a common occurrence on the EJ&S line back in the day. The Swan City Express came to an end in 1961 and the tracks were pulled up; this trestle was the last remaining vestige of the original EJ&S line: 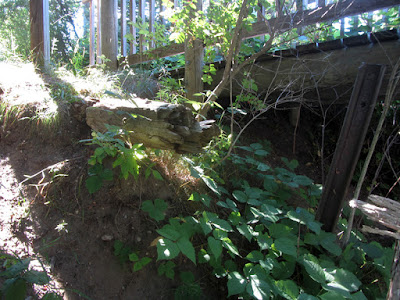 Continuing along my way on highway M-88, I paused when I saw what looked to be an abandoned golf club... 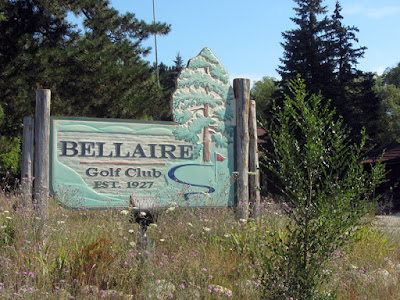 The main building didn't seem too old or interesting--certainly not dating to 1927 anyway--so I continued on to see what an abandoned golf course looked like. 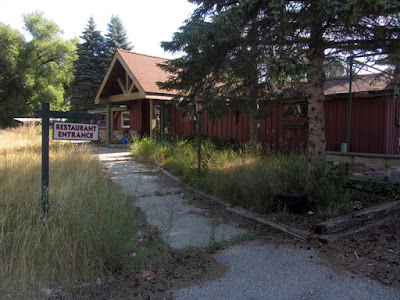 These large wide-open areas I presume once used to be fairways. Or is it greens? I know almost nothing about golf, but I am pretty sure that the grass isn't supposed to be knee-deep. 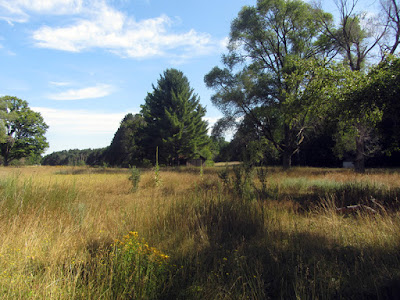 Antrim County was once known for having numerous golf resorts, and it seems to be as true today as ever, but for whatever reason this oldie wasn't able to hang on in modern times. 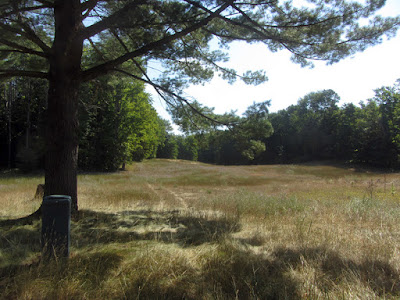 I continued to the old ghost town of Wetzell, which once sat at US-131 and Satterly Lake Road. I had no luck finding the substantial concrete ruins of the old hotel's foundation, which are pictured in the book Ghost Towns of Michigan, Vol. 1, by Larry Wakefield. This was my second attempt at finding it, but for whatever reason I came up empty again. There were these two structures though, one of which had lately burned down: 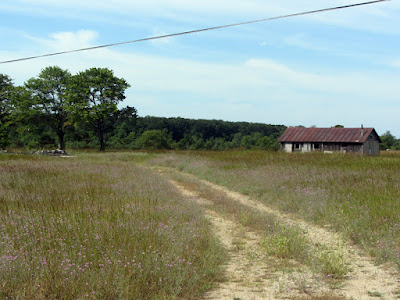 David M. Brown notes in his atlas that the Wetzell brothers platted this village in 1881 and opened a sawmill. The town was on the Grand Rapids and Indiana Railroad between Mancelona and Alba, and facilitated the harvest of pine-hemlock stands in the area.

Mancelona businessman Frank Harding later changed Wetzell into a company town in 1886 when he built 50 houses and converted the sawmill into the Wetzell Turning Works, which worked with hardwoods to produce turned furniture pieces, railings, and handles for tools and things like the carpet sweepers being made in Grand Rapids, and croquet mallets. The town also had a church, a school, two stores, a hotel, and a boarding house with a dance floor / roller rink in the basement. 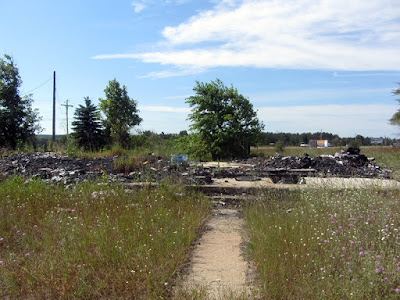 Wetzell boomed under the guarantee of good steady wages, plus free rent, and stove wood to employees. Dodge says that in 1905 Wetzell's population was 250, but the forest was almost getting depleted by 1909. The mill closed that year, and Wetzell quickly became a ghost town. According to the book Michigan Place Names by Walter Romig, Wetzell's post office closed in April of 1910, but Dodge indicates it was open until 1912. Larry Wakefield notes that in 1930 the population was still 240 people however.

Today the state historical marker along 131 marks the old town center, but it's kind of hard to envision a town here. 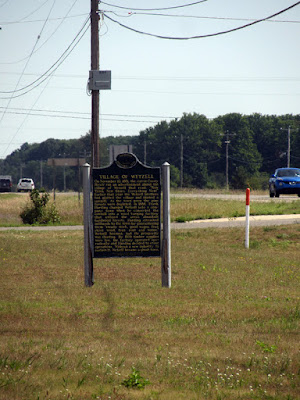 A recent article in the Traverse City Record-Eagle tells some more about the town of Wetzell, past and present.