The Weirdest Hotel in Michigan

You may remember when I wrote about exploring the ruins of the House of David religious colony on High Island in Lake Michigan, back in 2013. Well the House of David's base of operations was in the city of Benton Harbor, in Berrien County, Michigan's southwestern-most county, where they had an extremely popular amusement park and a strange hotel downtown, which is now abandoned.


The city of Benton Harbor is not much different from Detroit or Flint, in that it has suffered greatly from population loss, crime, and poverty, and its downtown is often like a ghost-town. My visit came early on a weekend morning, so there was not a single other soul about on the streets. There weren't even any cars moving through, and I was able to stand in the middle of the road to casually compose a shot: 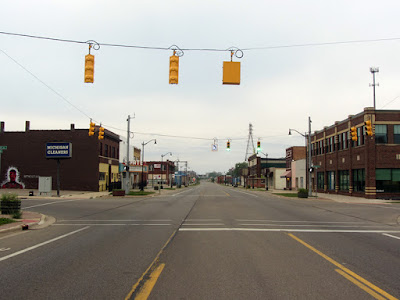 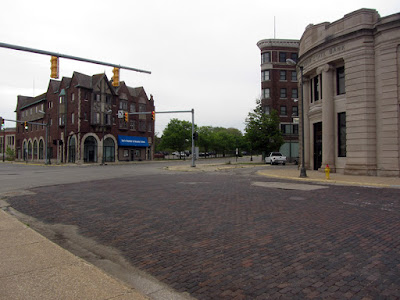 In fact Benton Harbor has the dubious distinction of being known as "Michigan's poorest city," but it is also the hometown of the Whirlpool Corporation since 1911, the largest household appliance manufacturer in the world (as of 2006 when they acquired Maytag). 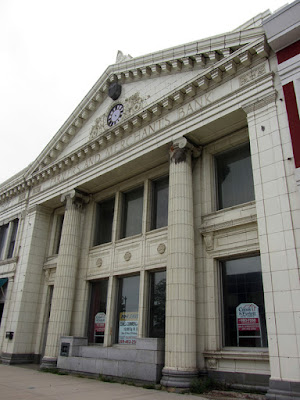 Most of what I know about the so-called Mary's City of David Hotel I learned thanks to my colleague David Kohrman, a longtime scholar of southwestern Michigan history, and of hotel history in general. He researched and posted much of the following information on one of those impenetrably elite, ultra-underground secret urban exploring forums that you've probably read about in flashy counterculture zines, where heavily vetted members trade war stories anonymously. In fact I'm probably breaking the first and second rule of Fight Club by posting this, but oh well. 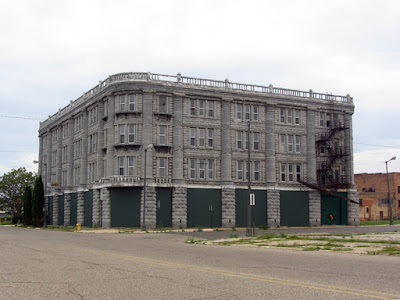 Again, this hotel was built by a cult--or, rather, a "religious communal society," called the Israelite House of David founded by Benjamin Purnell and his wife Mary in 1903. They were those guys with the long-bearded baseball team. The House of David actually became pretty successful thanks to their amusement park and bearded baseballers, and they built a large complex on the outskirts of Benton Harbor, which (according to a chicagotribune.com article) included their own dairy, foundry, cannery, hospital, three vegetarian restaurants, and a resort that "attracted non-adherents who wanted to escape the summer heat of the cities." There was also the aforementioned farm colony on High Island, several miles out into Lake Michigan, which seems to be where "King Ben" (as he was dubbed by the media) allegedly did all of the creepy stuff.

This hotel was to be another expression of the House of David's prosperity in Benton Harbor. In 1919 they planned it to be seven stories tall and occupy the entire block, but it ended up much smaller than that as you can see. David Kohrman tells me that this particular section was always intended to be four stories tall, and the seven-story part was never built. It had 90 rooms according to the book Buildings of Michigan by Kathryn Bishop Eckert, and nonetheless became one of the commune's best revenue streams, one which was designed to bring income year-round, as opposed to seasonal activities like amusement parks and baseball. 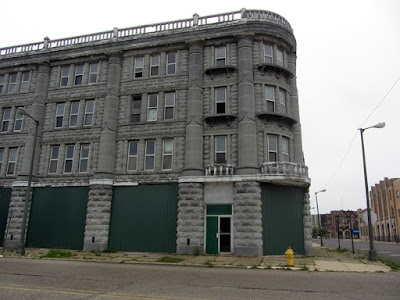 The exterior was cast in "Hematite," a special form of concrete made of 17 different minerals that sparkled in the sun, a distinctive feature of the House of David's architecture, Kohrman said. Naturally, it had to be cloudy when I arrived, but I imagine the effect should look something like this. According to author Christopher Siriano, the hotel was designed by George Whiffen and William Wright--the House of David's favored architects, though to be fair Siriano is persona-non grata with the City of David, since his book is half fabrications and he is known for starting rumors about secret tunnels, hidden rooms, and other sensational things about the organization.

Another book by Robert C. Meyers said the hotel was "remarkably modern" for its day, because there were two windows for each room, and two-thirds of the rooms boasted private baths. The House of David also advertised the hotel as fireproof--going as far as to paint the words "FIRE PROOF" on the front windows in big red letters--because of its solid steel and Hematite construction. 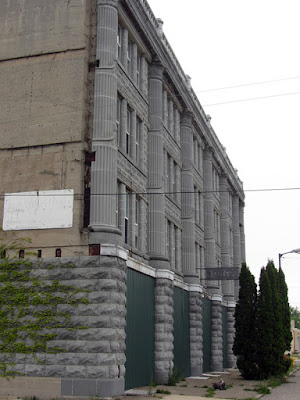 By itself, Hematite is a commonly occurring mineral compound of iron, but I don't think I've ever heard of Hematite being used in concrete or architecture before. A quick internet search however yields some interesting results that name it as the material of choice for nuclear reactor chamber shielding, or other barriers required to be resilient to high neutron fluxes.

Strange...I wonder if the House of David architects took any tips from Ivo Shandor, because "FIRE PROOF" is a bit of an understatement given the fact that its outer walls are for some reason built of material that can withstand not just flame, but extreme levels of nuclear radiation. Maybe there was more to this little vegetarian "commune" and their sparkly hotel than meets the eye? 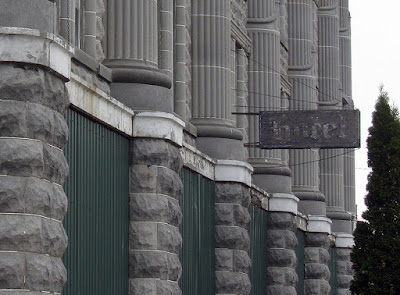 The earliest mention I can find of Hematite concrete is in an article in a c.1918 trade journal, which mentions it among other types of slag that could be used as aggregate to produce unusually heavy concrete for the purpose of making counterweights for bascule bridges, and use as ballast in ships. At the time the use of metal for such purposes was outlawed by the government, because it was needed for war materiel production.

David Kohrman told me that he believed the first use of Hematite concrete was in 1916, when the House of David built their "Diamond House," Purnell's fanciful mansion on the colony grounds, which still stands today and where his coffin still sits on display. 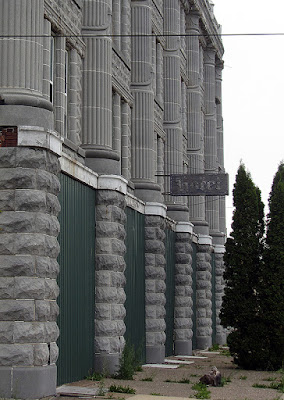 Mr. Kohrman's own impression after exploring this hotel was that it was "very very odd," and that much of its design was cobbled together, with strangely-proportioned hallways, inexplicable stairway placement, things like a closet built out into a hallway, and the rather utilitarian main lobby that looked as if it were added as an afterthought: 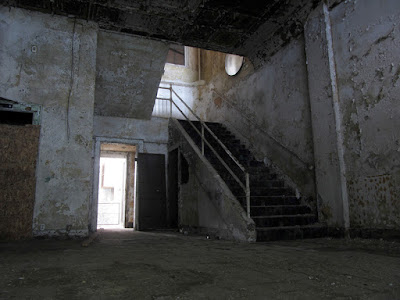 "My initial reaction," he said, "was that this building had no architect." It certainly was a bizarre building, but I surmise that the end product was the result of the architects' original plan being taken over and independently completed later, by City of David builders who modified it as they saw fit, perhaps to save on cost after the court case derailed the society. Then again, they may have been out to design a structure for some higher, as yet unforeseen *radiation-proof* purpose, heheh.

Under the stairs was the vault, whose door had already been taken off the hinges for me: 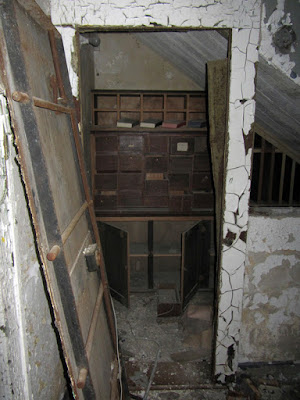 Construction on the hotel started in 1921, with House of David members performing all the work themselves. The job was halted in 1923 however when Brother Benjamin Purnell was faced with multiple allegations of forced sex with minors in his commune, tying up the House of David (and their revenue) in the courts for several years. At that point only a four-story shell of the rear half of the building had been completed. Benjamin Purnell died in 1927 before his abuse case went to trial, and the House of David splintered into two factions. His wife Mary Purnell headed one faction, called "Mary's City of David."


The House of David properties were fought over and divided up between the two factions. Mary's City of David ended up with the hotel (hence the name), and work finally resumed in 1931, though it had to be scaled back from its original conception. Keep in mind the Great Depression was in full effect by that time as well. Another reason why this hotel was scaled back was because the Vincent Hotel was also opening on East Main Street around that time. Mary's City of David followers used this hotel as housing while they built new dwellings for themselves on Britain Avenue.

According to what Mr. Kohrman was able to find out, since the public common areas were intended to go in the unbuilt section on Main Street, the aforementioned "makeshift lobby" was added in what was to be one of the storefronts. I'm not sure if this next shot shows one of the storefronts, or another room open to the hotel guests, but the vintage fluorescent light fixtures hanging from the tin ceiling were pretty snazzy: 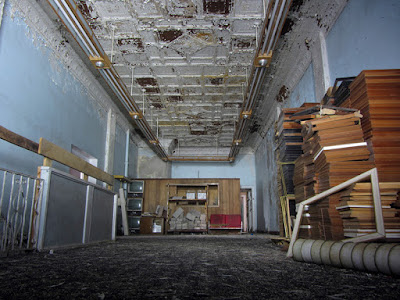 The building opened in August of 1931 as "Mary's City of David Hotel," and prospered for 40 years. It was noted for its vegetarian restaurant, according to the book Resorts of Berrien County.

In the next room, yet more bizarreness...a 1969(?) Cadillac just chilling out. There was a pallet leaning up against the back of the car, so I moved it out of the way to get this photo--and when I did the trunklid sprang open suddenly, nearly scaring the f@#$%ing shit out of me. 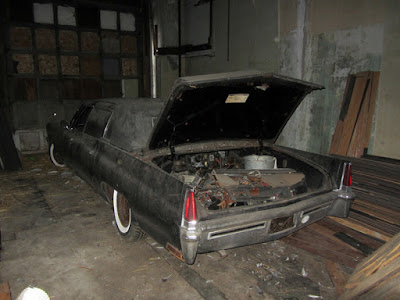 This bizarre niche in the building was awfully mysterious too... 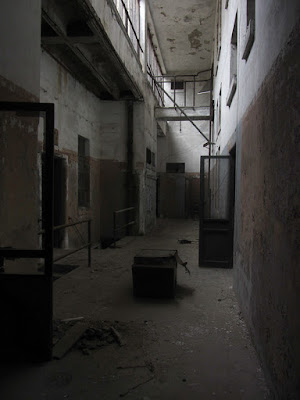 The stairways gave access to the compartmented basements under the hotel's storefronts, while there also seemed to be some sort of draft-ventilation system at play in this area as well, perhaps? David Kohrman actually took a closer look at the windows up there and wrote that they did not appear to have ever had any glass in them, and that this space was apparently designed to be open to the elements.

I also noticed on my own that the decorative columns on the facade of the building seemed to be hollow with small square vents at the bottom, as if they might've served as free-flow ventilation shafts ala Kirkbride hospital design. 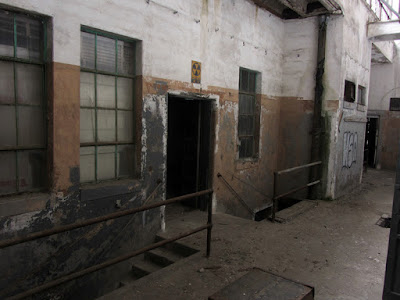 Notice the glass-inset metal grille over the floor here...it's covered in dirt, but it was no doubt meant to help let natural light into the basement from above: 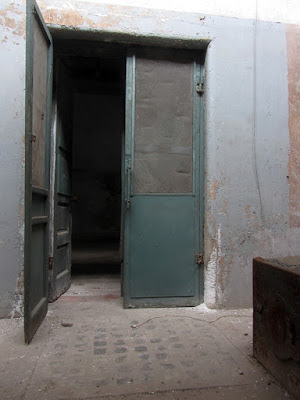 I think some of these windows did indeed belong to guest rooms. What a cheery view! 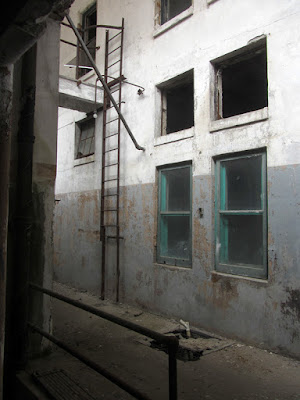 Mary's City of David continued to shrink over time, and the commune divested itself of the hotel in 1974 in exchange for property on Lake Chapin. The amusement park closed too, in 1975. By that time the baseball team had already faded into the history books, having quit in 1956. The policy of celibacy among followers resulted in a notable lack of new generations of acolytes to keep the commune going--despite the supposed promiscuity of its founder. 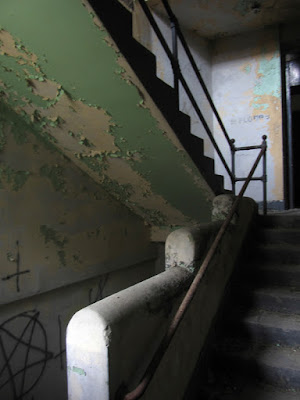 David Kohrman said that after the Mary's City of David sold off the hotel it continued as the "Landmark Hotel" for many years, but by the 1990s was mostly used as senior citizen housing. I believe the main floor also housed a tire shop for some time as well. 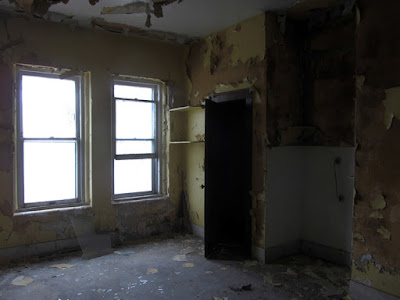 It was finally closed by the city in 2001 after a newspaper article described a visit by city inspectors who discovered that the residents had cut open one of the boilers in the basement and were using it as a makeshift wood-burning stove, because apparently there was no steam heat anymore. Kohrman said there was frequent talk of renovating the hotel throughout the early 2000s, but it has been little mentioned in the papers since then. 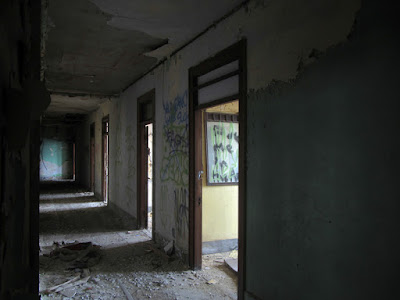 Damage to the structure was evident on my visit, but by no means is this place beyond salvaging. 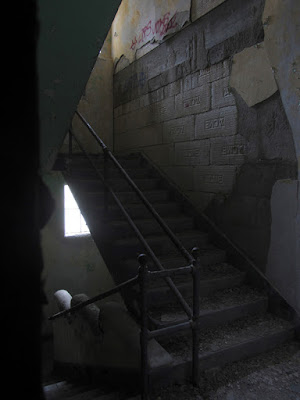 This room was full of old 1950s refrigerators: 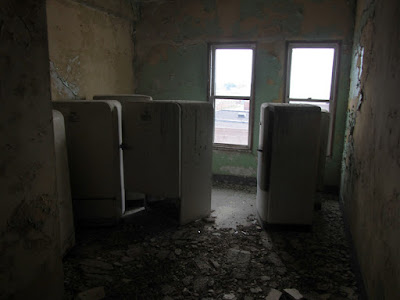 A strange courtyard with a very different appearance than the outer walls of the hotel: 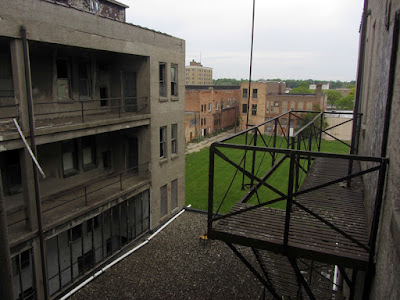 Down below you can see the glass-less windows of that bizarre open-air section where the basement stairs were. 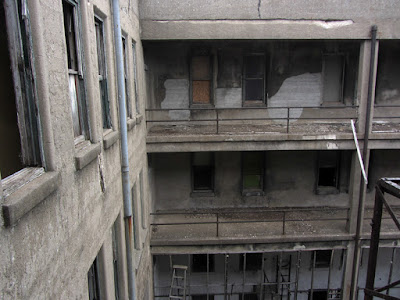 This weird courtyard reminded me somewhat of a 300-year-old hostel I once stayed in in France. 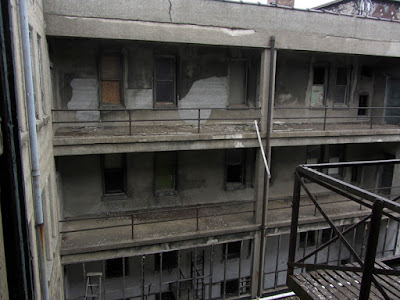 Only the guest rooms on one side of the building had balconies overlooking the courtyard: 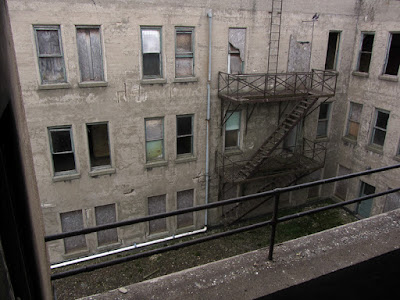 The view down the alley from a hallway window shows a row of more apparently vacant buildings: 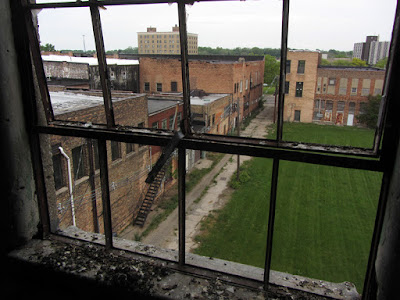 On the top floor I went into the corner suite to see if it was as sumptuous as one might expect, but it was rather plain: 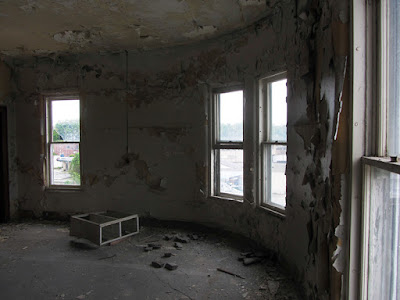 Last thing to do was check out the roof. 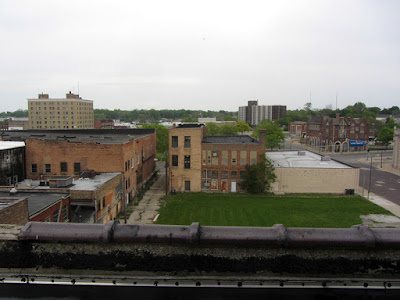 Even though I had been here for about an hour, it still seemed I was the only human being in town today. 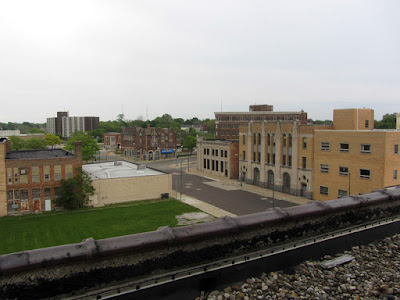