The Real Story of the "Haught Mansion"

Sadly, it's much harder to get rid of a hoax than it is to create one. Everyone loves to hear a crazy story about a haunting at a particular house—far fewer people are interested in reading about how nothing extraordinary in fact ever happened at a particular house. In fact, 90% of you have already probably closed this tab and moved on to other clickier things in your feed. But when those falsehoods are inadvertently repeated over and over again, they tend to bury the truth, and this can reinforce misinformed public perceptions that can be damaging.

A photographer who goes by "Seph Lawless" has reportedly made a rather handsome living off of his photos and books about abandoned places, and from selling images (with phony stories attached to them) to major media outlets, some of which include the Huffington Post, Slate, and The Telegraph. One of his popular fakeries concerns this house in Detroit's Brush Park neighborhood, which Lawless calls the "Haught Mansion." He alleged that in 1941 it was an upscale gentleman's brothel, and that years later several corpses were found in its basement marked with a "perfect circle" on their chests.

Now, I can respect a good hoaxster if in fact the motive was to burn lazy journalists who are notoriously poor at fact-checking before they automatically put something into print, but I'm not sure there is anything at play here except pure profiteering. Questionably-factual ghost stories about creepy old buildings accompanied by moody photos sell newsprint—which is measured in mouse-clicks and ad revenue these days—and Lawless has figured out how to efficiently scam that system to his advantage. Perhaps even the aforementioned media outlets are complicit in Lawless's hoax, caring only that uninformed people will click the stories and generate ad revenue. Furthermore, there's nothing wrong with celebrating an urban legend, but this is not an urban legend. Urban legends by definition have some element of truth to them, and the story of the "Haught Mansion" is a complete fabrication.

Make of Lawless's intentions what you will, but I've chosen to use this post today to debunk the hoax, and restore a house's rightful history that has been effectively obscured in online searches. In the space of about an hour I was able to research and type out about as complete of a history of this house as one could hope for, without actually going to an archive. All of the information presented in this post was researched online using Google, Google Books, Google Maps, saved .pdf copies of the Detroit Sanborn Maps, and the Detroit Public Library's ProQuest online newspaper search engine. My ass didn't even have to part ways with the comfortable dent in my easy-chair during all of this (except for when I drove by to get some photos of my own).

The first—and hardest—step was finding the house's real identity, and in order to do that I had to start off by figuring out its physical address. According to the Sanborn maps of the area, this lot's pre-1921 address was 81 Edmund Place, and after 1921 it was renumbered to 229 Edmund Place. The map also noted the structure as a "Rooming" house, meaning that it was owned by someone who took in-boarders at some point around then, so whoever originally built it had probably moved on by that point. The architecture suggests that it was built in the 1870s or 1880s, but I don't have Sanborns going that far back.

The Luben Apartments, also known as the "Brush Park Castle," used to stand across the alley from this house, which I explored in an older post. In a photo from its roof, you can see the "Haught Mansion" prior to it's rear half turning into a blown-up mess, as well as its now-demolished neighbor.

Ironically, last night my girlfriend and I were just discussing the website diedinhouse.com which lets you pay to search death records to instantly see if someone died in your house. Since it was going to cost $12 for us to look up our house, we decided not to, and came to the agreement that any house built as long ago as the 1870s (in our case) undoubtedly has had at least one person pass away there in its history, if not several. This goes for any old house—death is a fact of life, and statistically most people die at home of old age.

So in that sense Mr. Lawless wasn't too far off from the mark when he made up his story—according to the July 8th, 1892 Detroit Free Press a Mr. Henry Glover owned this house, and had passed away in it the morning prior.


Glover was a "well-known" and "highly respected" Detroit businessman for "four-score years," the article eulogized. According to Silas Farmer's The History of Detroit and Michigan, Glover was born in New York in 1812, and apprenticed in the tailoring trade before receiving his education and getting into the dry goods business. He came to Detroit as a tailor in 1836, and by 1843 was a partner in the firm Smith, Glover & Dwight, dealing in general merchandise and lumber. Later he got into real estate investment and made himself rather wealthy this way.

Glover also held the office of School Inspector briefly. Among his real estate activities, he was "among the first, if not the first" to see the possibilities of Jefferson Avenue as a wholesale and jobbing street as Farmer put it, and in 1885 bought a vacant lot at Jefferson & Wayne that was infested with birds of "the worst possible character," erecting there a "substantial brick block" after clearing away the vermin. He then built another four-story building across the street from it, and another large brick dwelling at Fort Street & Sixth. 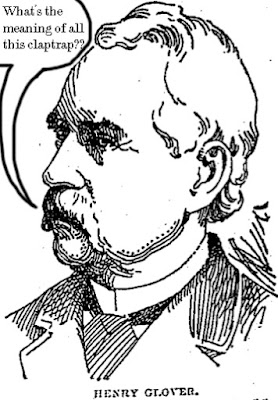 Another Free Press article indicates that in November of 1922, a Mrs. Louisa Lemon died here at the corner of Edmund Place and John R Street, hit by a taxi cab. She was a resident of 227 Edmund Place, which was next-door to the Glover house.

The c.1885 Detroit Blue Book: A Society Directory for the City of Detroit shows one James Henry Glover, a chemist, residing at 81 Edmund Place—the eldest son of Henry Glover. James H. Glover was also shown in the c.1900 Catalogue of the Delta Kappa Epsilon Fraternity, indicating that he must have remained living in his father's mansion for some years after the latter had passed away.

A c.1906 copy of the Harper Hospital Bulletin lists a Miss Maud Arkell living at 81 Edmund Place, with a telephone number of Grand 190. I wonder if she was a nurse employed at Harper Hospital nearby.

By 1911 a copy of The Cornell Alumni News listed a Fred O. Ebeling living in the house, an employee of the Michigan Central Railroad.

A certain publication of the American Medical Association printed in 1916 and 1920 showed a Mr. I.S. Gellert, a fellow of the AMA, at 81 Edmund Place between those years. Probably another member of the medical profession employed at one of the several hospitals in the neighborhood.

On January 1st, 1921, the City of Detroit renumbered all of its addresses, and the Glover home went from being 81 Edmund Place to 229 Edmund Place. A c.1922 issue of Good Housekeeping contains an ad whose fine print appears to indicate that the "Ebby-Cole Co.," was then located at 229 Edmund Place, though I could not readily turn up much info about such a company on Google.

Here is a fabulous (although small) photo of the house as it looked in 1976:

A c.2007 article in Crain's Detroit Business reported that 229 Edmund Place had been bought by the Brush Park Conservatory of Music and Fine Arts, though this venture seems to have fizzled soon after. According to a post at fadeddetroit.blogspot.com in 2013, the house was put on the city's demolition list, and the Detroit Historic District Commission apparently had a hearing on the transfer of the parcel in August of 2015.

As if all of this research wasn't enough, the Brush Park Preservation Society has also said on their Facebook page that there were never any "bodies" found in this house, nor any truth to the phony story about the 1940s brothel.

UPDATE: As of June 2017, the Glover house is undergoing renovation!