Along Epworth Street south of Tireman Avenue stood a series of small tool & die shops that I was told by a classic car enthusiast friend once served the needs of the old Lincoln Motors Plant nearby. Most of the mammoth Lincoln Plant is gone, but this iconic wall of sawtooth monitors still lines Livernois Avenue north of Warren Avenue:

Perusing the c.1924-1950 Sanborn map of Epworth Street next to the Lincoln plant, a litany of machining and stamping shops are evident on both sides of the street, some of which had fancy brick facades for their front offices. 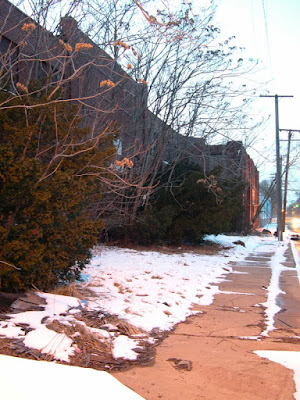 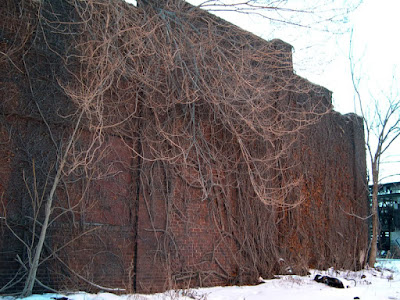 At about 6481 Epworth was the J.C. Genzer Co., another machine shop most likely. At 6436 Epworth was Superior Piston Ring, who undoubtedly manufactured rings for engine pistons in automobiles. At 6431-6463 Epworth was the American Metal Products Co., making metal tubes. The building was later occupied by Presstron Industries. At 6461-6301 Epworth (which was actually part of Lincoln Motors parcel) was the Motors Metal Mfg. Co., which consisted of a material warehouse, machine shops, fender stamping shops, and plating facilities.

Further up Epworth at Vancouver Street stood the much larger plant of Holley Carburetor, which has been demolished for many years. On a couple occasions I've helped the Vancouver Street block club do neighborhood clean-ups in the area. Holley supplied the carburetors for Ford cars, and Henry Ford bought the Holley plant in 1917—just a few years before he bought the Lincoln Motor Co. It became a division of Ford Motor Co., and Lincoln cars were built in the aforementioned Warren Avenue plant until 1972. 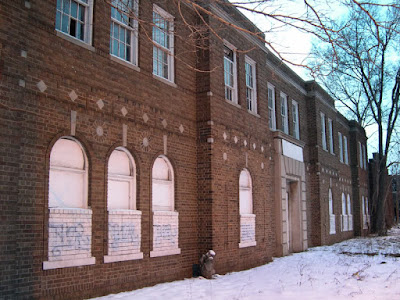 In my mind, these lesser-traveled avenues lined with small shops were always the true heart of the "Motor City," not the big well known mega-factories like GM Poletown, or the Rouge Plant. It was these tucked away little industrial streets and the processes they performed that kept the major automobile plants humming. Literally, they made the machines that made the machines that made the cars that made Detroit the Motor City. And it was in these smaller jobbing shops and parts suppliers that a great portion of Detroit's actual workforce was employed. I remember this spot because in order to get back around into the alley we had to go through a gap between the corner of the building and a stout fencepost that had been bent out of the way. The gap was V-shaped, and at the bottom of the "V" lay the rapidly deteriorating remains of what had lately been a rather large Rottweiler who had also tried to go this way within the past couple days, but got his hips stuck in the process, and couldn't pull himself out. 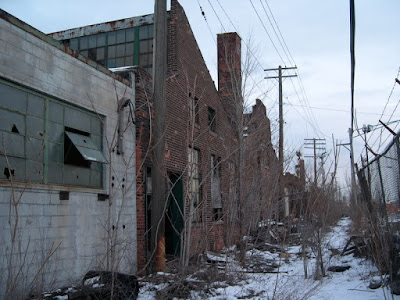 He most likely starved to death here. He was one of the many, many stray dogs that roam the streets of Detroit. 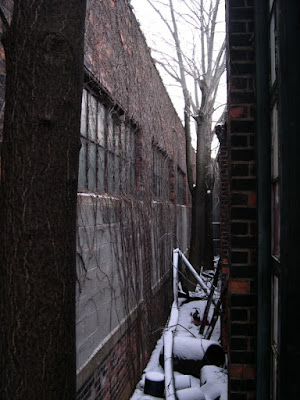 I believe this structure was part of Holcroft & Co., which was founded in 1916. They moved out to the suburb of Livonia at some point, and still exist today as part of a larger corporation headquartered in Wixom, Michigan. 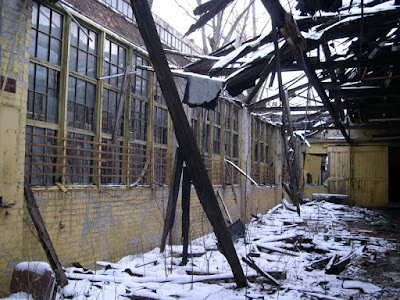 Fluorescent lights still hanging, despite the absence of a ceiling: 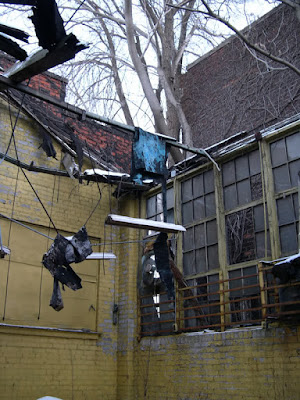 Looks like there may have been a fire here at one time, since every part of the roof except for the trusses and steel framing of the monitors has been eaten away: 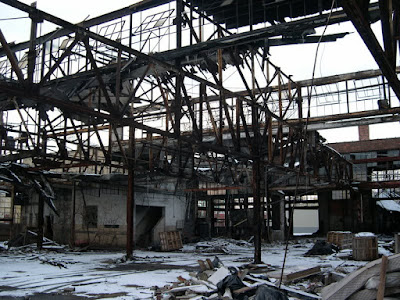 All of the buildings in these photos on the west side of Epworth have now been demolished as of 2015, though a few battered ruins of the Knight Screw Products Co. remain standing on the east side of the street. 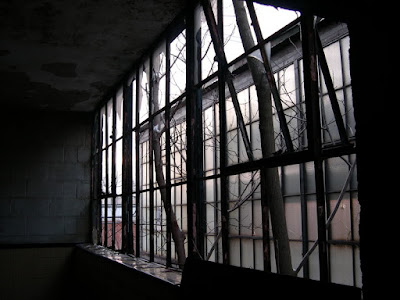 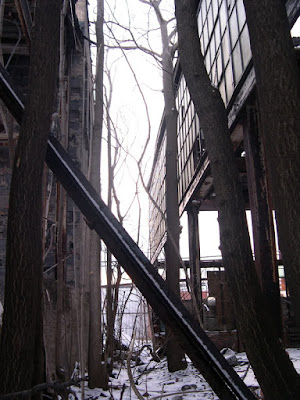 There was also this place, Commercial Steel Treating Corp., at 8050 Tireman, who did heat treating. When Chisel and I explored this place however, it had several chopped up bodies of busses laying around inside. 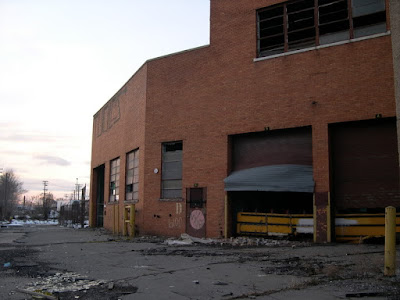 This plant was demolished sometime around 2009 if I remember correctly. 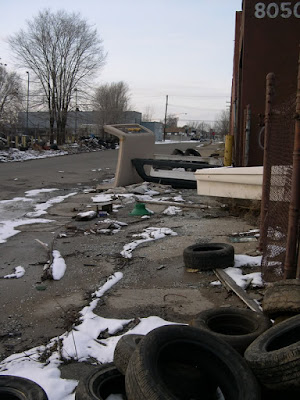 Look at this huge expanse of classic industrial window sash: 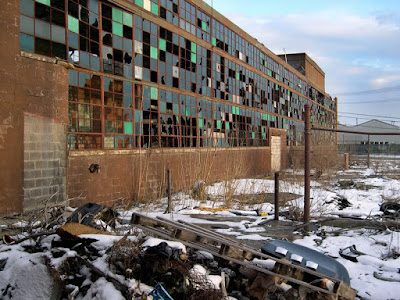 It's getting rarer and rarer to see plants—of any age—around the city with exposed windows of any kind, which is sad. Nowadays the logic is to cover them all up with corrugated steel and spray-on foam insulation to reduce heating costs. Sure makes for a depressing work environment, though. 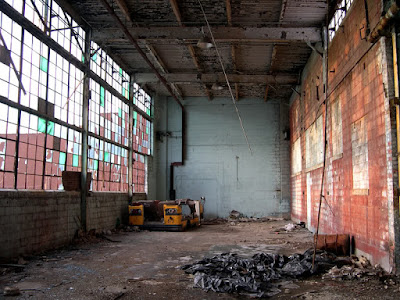 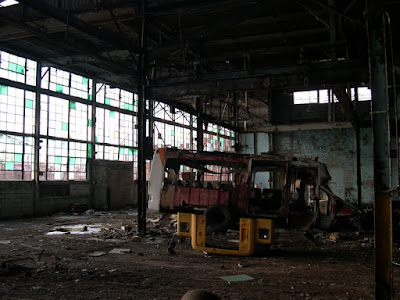 Maybe they were a business that converted old school busses into boats? 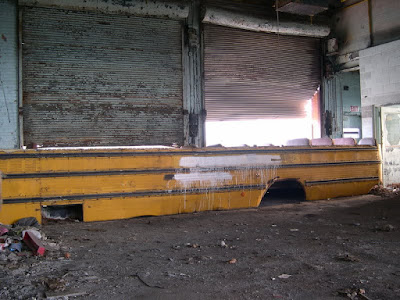 Another small passenger bus off in the distance there: 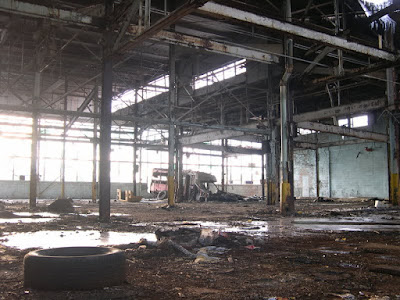 That stretch of Tireman Avenue was, ironically, popular for dumping tires—especially in front of this sign, which said "NO DUMPING—$500 FINE": 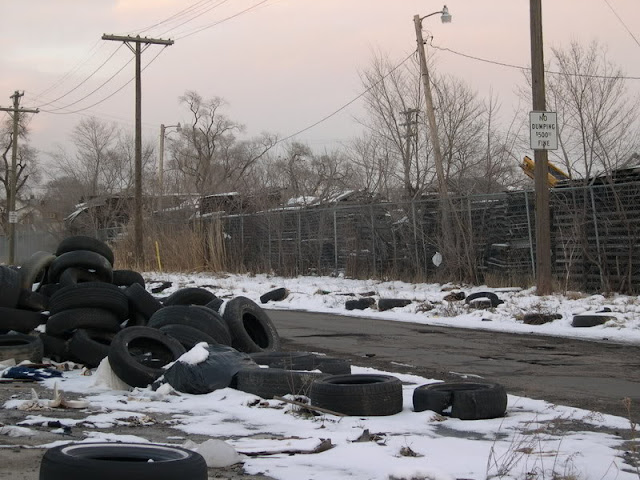