A Backyard Folly in Manchester

Along the Raisin River in southwestern Washtenaw County sits a picturesque series of ruins that I accidentally discovered one day while randomly putzing around with aerial mapping on Bing.

It was a rather long and mushy hike through a large wetland before we came within sight of the old weathered walls we sought.

Since we were nearing someone's backyard essentially, I was extra vigilant and hoped that there weren't any dogs around that might scent us and begin barking to alert their master of intruders.

Once I could descry the silhouettes of massive concrete ruins beginning to take shape from the background static of the trees, that excited feeling of discovery washed over me again. I would never get to hack my way through the jungle to the foot of some ancient Incan pyramid, but this was close enough for me:

In France and England, it was briefly trendy in the 1700s to have "fake" ruins built in your backyard to lend a picturesque and romantic air to the grounds of your estate. How delightful, right? Anyway, these crumbling foundations were not originally built to be intentional decorative ruins in someone's backyard (since they predated both the backyard and the house), but that is what they ended up becoming when the plant that was to be built here went bankrupt before any more of the building was constructed.

As a result of having never made it past that point as a factory, there isn't much history to be looked up on it either, but the name of the concern was the Toledo Portland Cement Co., and the plant was going to produce cement from local marl.

If you've been a fan of nailhed.com since the beginning, you may recall my older posts about other ruined Portland Cement plants that I've explored in Michigan, namely the ones in Marlborough, Detroit, and Newaygo.

There is one webpage hit from the Manchester Area Historical Society that tells the brief story of this large ruin, which begins in 1903 when these behemoth foundations were laid. Cement sidewalks also "made their appearance" in town that year when eight were poured, perhaps to get the townsfolk excited about the new snazzy era of cement that was dawning for them.

Planned to be "one of the largest and most up-to-date cement plants in the country," the Toledo Portland Cement Co. would sit on 23 acres served by a new spur of the Lake Shore Railroad. The town of Manchester itself was settled in the 1820s, with mills established along the River Raisin, and the Old Chicago Road passed through town as well.

Reportedly the local paper carried a full spread on the plans for the new plant, elaborating on what promises the future held for Manchester commerce and explaining that nearby lakes contained great marl beds and clay banks just waiting to be exploited. But, "the building was never erected and the walls stood like the remains of some ancient ruins until shrubs and vines covered them." Naturally if I had read something like that before having already found it on aerial maps, I would have been salivating like a mastiff to get at it...a ready-made ruin that never was--doesn't get much more fantastic than that.

Furthermore, that would be pretty cool to live in the house next to this and be able to say that you have a 23-acre ruin in your backyard.

Just when I thought this spot couldn't get any cooler, I noticed this behemoth cottonwood tree:

This tree may be a contender for the biggest tree I have ever seen in the State of Michigan, and I've seen a few state champions.

My girlfriend estimated that it was about 100 years old, which has to be pretty accurate if it is growing over a foundation that was built in 1903. 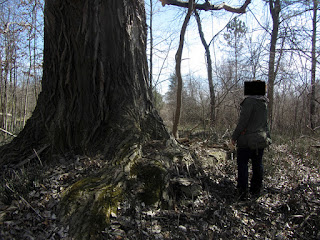 That trunk is about seven or eight feet in diameter. Even that one root seen in the foreground is as thick as the entire trunk of the maple tree I have in my front yard!

The Michigan Bureau of Labor and Industrial Statistics report for 1905 lists a Mr. O.H. Dunham of Toledo, Ohio as the plant manager, and a production capacity of 1,000 barrels daily (which I imagine was a projected figure?).

The report elsewhere mentions that as of 1904 there were 16 Portland Cement plants in Michigan, 14 of which were operational, and 11 of which used marl (as opposed to limestone) as their base. Almost all of these plants were predicted to increase their output in the coming year, and to be able to continue running for 75 years based on the current marl deposits in sight. Altogether, 1,500 Michiganders were employed in the state's cement plants according to the bureau's statistics.

The Bureau of Labor report for 1906 however doesn't seem to recognize that Toledo Portland Cement Co. was in any financial trouble by that point, and says only "This plant was not completed at time of inspection, but expected to commence operations very shortly."

The only other two hits I found in Google Books were court transcripts from the bankruptcy proceedings. In the case Torrey et al. v. Toledo Portland Cement Co. et al., stockholders led by a Mr. Orlando L. Torrey sued the company, which ran out of capital in 1904, having spent $100,000 so far on the land and construction. It also says machinery was in fact installed at the site for the manufacture of cement, though another source said that it was boilers that had been delivered and were waiting to be installed.

A September, 1906 U.S. District Court transcript says that the company was organized in January of 1903, and generally agrees that buildings were partially erected, some equipment was installed, and marl beds were inspected, but that before any production could begin the corporation "became financially embarrassed, and all work stopped," in the latter part of 1904. They had begun buying up right of way for a railroad spur to the marl bed four and a half miles away, but no track was yet laid.

The Toledo Portland Cement Co. was officially declared bankrupt in 1906 after the matter had already been entangled in the courts for some time.

It doesn't seem like it took long after that for the site to succumb to the advances of nature, and fall into ruin.

There were a series of notches in the foundation on this level like the crenellation of a castle battlement:

It was almost as if material were to flow down through them like a sluice to the next stage of the manufacturing process:

Climbing up on top of the wall to look down from above at one of the gaps, you can better see the angled part that looks like a chute or sluice:

From up on this escarpment of the uppermost level of the mill I could look down on a large percentage of the entire ruin:

I kept waiting to see deer come bounding through the area, but none came.

This would be an awesome spot to hunt I think. In fact, if this was my backyard I would groom back a lot of the overgrowth so as to make the whole thing more aesthetic and more like an actual folly, or place of meditation, similar to what the "Jam Pot Monks" have done at the Arnold Mine.

I moved back down to the next lowest level for a better look.

These footings seemed a lot more weathered than the rest of the walls:

It even looks like two different kinds of building material:

Some piece of machinery was obviously mounted here, or something got demolished at some point; I know that rebar didn't bend itself:

It's strange that the concrete of the little pyramids in the middle of the floor-plan are so much more decayed and crumbling than the concrete making up the outer foundation walls...

...it makes it seem as if either there are two different types of concrete being used here, or they were poured at two different times, to explain the difference in level of decay.

Off to the left here was what looked like a series of divider walls between sections of the plant:

Up ahead was an interesting-looking taller structure...

...it almost looked like an enclosed structure with a window:

Up 'til this point I hadn't realized just how graffiti-free this place was until I saw this first minor example of vandalism:

Usually places like this are havens for rattlecan kids to go hog-wild and paint the place up, but the fact that it literally sits in someone's backyard has apparently kept everyone away from it pretty consistently for the past 102 years.

Huh, it looked like there was some free-standing chimney-like column there too:

I imagine this place must be lit up pretty colorfully in autumn...

Continuing to hike up and around the upper back side of the ruin, I found myself on the uppermost level of the plant, where the walls were shortest and the trees opened up to let a small pleasant patch of prairie grass grow:

A small opening in the foundation almost felt like going into a pasture for goats or some other penned livestock, which made me wonder if this ruin had not been used at some point by a farmer for exactly that purpose?

I could definitely envision cattle grazing in here 100 years ago, with perhaps a hand-made wooden gate blocking off the gaps in the wall.

There was a slightly raised area here, which was somewhat mysterious:

Another gap in the crenellated foundation allowed me a look back down over the courtyard of standing pillars I had recently been in:

And here was that interesting little structure with the window and the column again:

This looked like a series of some sort of bins, which stood perched over the next tier of the foundation, almost as if there was a gravity flow plan to this mill, where work and material moved down incrementally from the highest level to the lowest, much like the stamp mills found up in the Copper Country of the Upper Peninsula:

You can barely see lots of tiny iron bolts jutting up out of these footings, no doubt once intended to pin down heavy machinery:

Can't really figure that one out.

Another giant, silent ruin out in the beautiful Michigan woods.