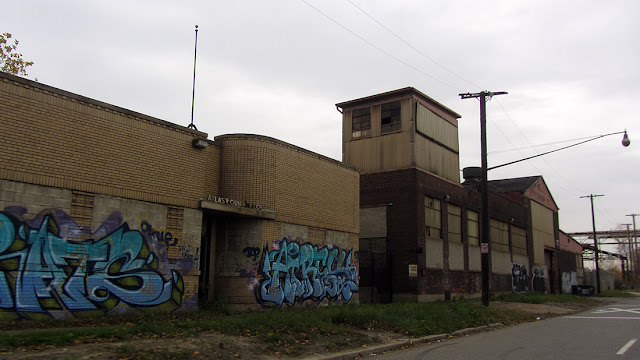 The Atlas Foundry at 131 S. Livernois Avenue is another of the many old buildings in the Delray area of Detroit that will soon be demolished to "make way" for the new international bridge to Canada, so I felt it important to try and document it before that happens.

Update: Well, that was quick. It's already gone.

Since I used to work at Historic Fort Wayne, I inadvertently watched this building almost daily for the better part of a decade. While passing by I never saw any activity there nor any openings I might be able to exploit, until one day when I noticed all the bay doors flung wide open. I assumed it had just been cleaned out and might be the next victim of the wrecking ball, so I went in. 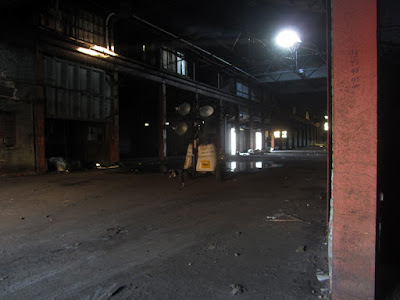 According to ancient Greek myth, Atlas was one of the Titans...his name means "endurance." He was punished by Zeus, and made to hold the weight of the entire world up on his shoulders for all eternity for leaving the toilet seat up in Hera's guest bathroom at Mount Olympus. But because he did such a good job with holding the Earth up, Zeus eventually let Atlas off on good behavior and paroled him into a work release program where he held a menial job in this hot, dirty foundry in Detroit for the remainder of eternity. That was how this foundry got its name. 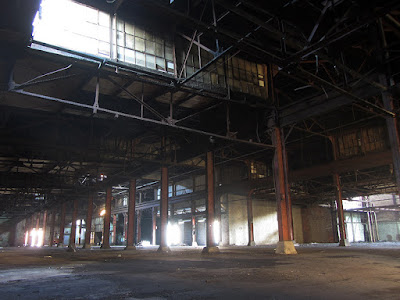 Sadly, when the foundry closed in 1986, Atlas was left homeless on the streets. With nowhere else to go, he eventually got into crack cocaine, frequently went in and out of prison, and was finally killed by Detroit Police while holding up a coney island.

Clearly this was all Obama's fault, but let's rewind for a moment... 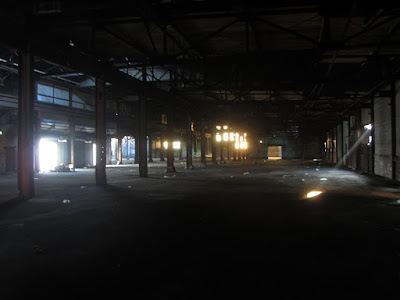 Livernois was called Artillery Avenue back when this foundry was built. The c.1923 Sanborn map of the area shows Detroit Grinding Wheel Co. directly north across the train tracks, along with U.S. Radiator Co.'s foundry, the J.M. Cliffort Co. lumber yard, the Unique Brass Mfg. Co. machine shop, and all single-family houses in the lots to the south of here. Opposite from Atlas Foundry on Artillery (Livernois) was the Michigan Pressed Steel Co. (later to be occupied by McLouth Steel), and the small U.S. Bearing Co. plant was on the adjacent lot to the south.

All the military-themed street names in this area (such as Artillery, Dragoon, Sword, Bayonet, Cavalry, Wheelock, etc.) are of course due to the fact that Fort Wayne sat just a few blocks directly to the south of here. At the time when this foundry and this neighborhood were built, Fort Wayne was still a garrisoned army post, although not much was happening militarily back then. Today the Detroit Water Dept. has an office facility immediately next-door to this plant. 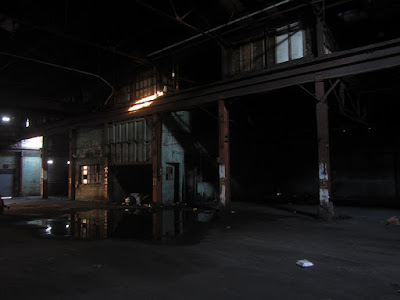 A snapshot from the earlier c.1910 Sanborn map shows that this lot where Atlas stands now was vacant, there were fewer houses in the area, and the only other factories standing were the small National Motor Castings Co. across Military Ave. to the east, Star Corundum Wheel Co., United Coal Yards Co. nearby, and a few older vacant buildings, "partly fallen in."

The 1914 Polk's Detroit City Directory listed Atlas Foundry at the location of the National Motor Castings Co. at the southeast corner of Military and the train tracks that was shown on the 1910 Sanborn map (two blocks to the east of this current building). A help-wanted ad posted by Atlas in the May 4th, 1910 Free Press for a "first class" oxy-acetylene welder seems to suggest that National Motor Castings Co. had moved out of the Military Ave. plant, and Atlas Foundry came into existence there in 1910. 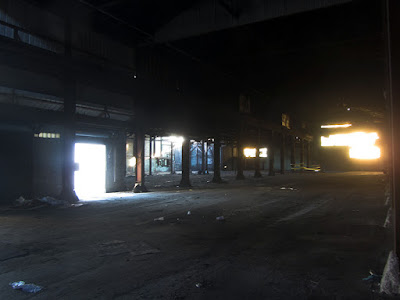 A later article in the Detroit Free Press further suggests that by at least 1919 Atlas had already moved out of there and into this new building on Livernois. The article, "Union of Molders Enjoined by Court," tells of how Judge Dingeman granted an injunction against the officers of the International Molders union from "interfering with employees" at the Atlas Foundry on Artillery Avenue (Livernois) in April of 1919. 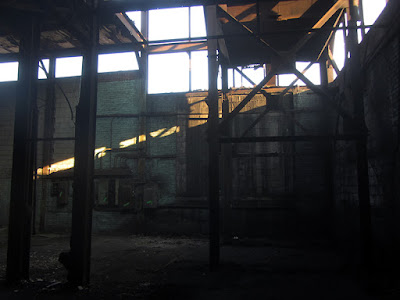 The company had not been a union shop since a previous strike in 1917. The union "served notice" to Atlas that it wanted them to institute an 8-hour workday, an 80 cent per hour minimum wage, and other conditions. The company refused, and the union picketed the plant. Several workmen submitted sworn affidavits that they were assaulted when they crossed the line. I did not find any subsequent articles describing the ultimate outcome of the strike. 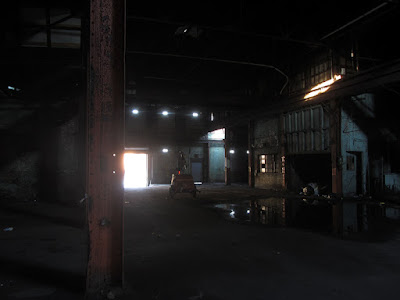 Atlas Foundry Co. was a Detroit automotive supplier, although that might go without saying, given its location. Robert B. Crawford was named as its company president in a 1929 article, while another article names Robert C. Crawford as president; I'm not sure which one is correct, but in any case he died in 1931 and lived at 1422 Hubbard. 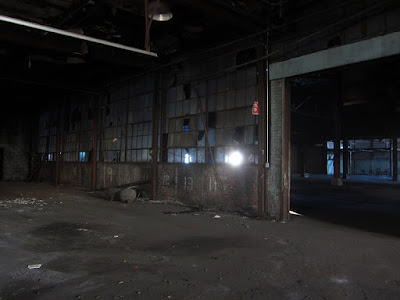 Robert Crawford's obituary says that he came from Scotland in 1902, arrived in Detroit in 1909, got a job as a moulder at the Detroit Foundry Co., and finally became president of the Atlas Foundry in 1916. He was an elder of Immanuel Presbyterian Church (at West Grand Boulevard & Porter), and was active in west side politics. Coincidentally there is a Crawford Street one block to the west of here, but it was already named by 1910 according to the Sanborn map, so most likely it was not named after the owners of this foundry. 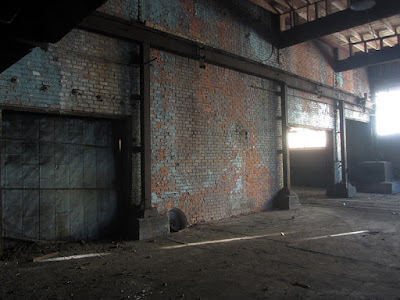 Robert's son William B. Crawford took over the presidency and ownership of Atlas Foundry. He was nicknamed "Babe" Crawford, and according to his obituary he was "well-known in Michigan golf circles." Said to be one of the best senior golfers in the state, he had been president of the Detroit Golf Club and the Pine Lake Country Club. He was also an honorary member of the exclusive Detroit Athletic Club, and was "long affiliated" with University of Michigan athletics. He was a member of the Evans Scholarship Committee (which gives scholarships to caddies), the Golf Association of Michigan, and the One Hundred Club. 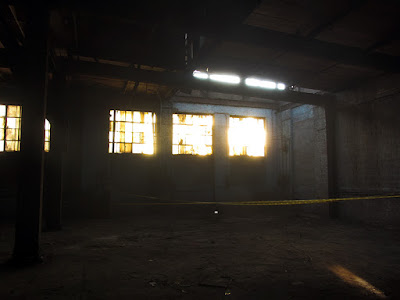 In the Fourth of July 1942 edition of the Free Press, a page was devoted to all of the local Detroit firms that had answered President Roosevelt's call to support the war effort. Atlas Foundry Co. had an ad that said even though most of the country's men were off fighting in the corners of the globe, "Those of us who are left back here at Atlas Foundry recognize full well our responsibility to those men," and pledged to do their best in "building the tools of war" so that they would be most effective in "speeding that day towards which we all look so eagerly," that of victory and peace. 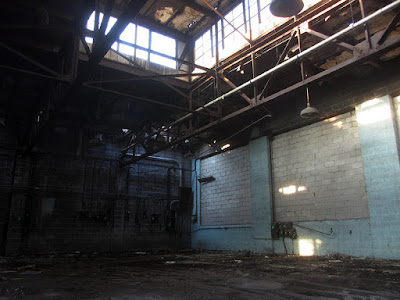 Despite their own positive patriotic publicity, in 1950 Atlas Foundry Co. was named as a defendant in an antitrust suit amongst seven other foundries in Detroit, several of their officers, and the Gray Iron Foundries Association. The association and its members were charged with controlling iron prices, and Atlas was assessed a fine for its role in the scheme. 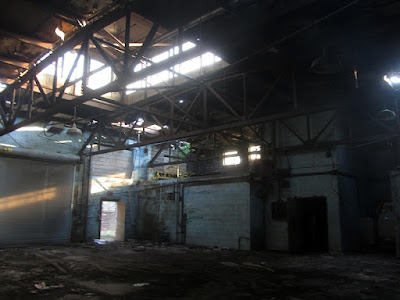 In 1960, a "white-hot geyser" of molten cast iron resulted in a 2-alarm fire at the foundry when it exploded from its mold on Friday, January 15, and was spread around a 40-foot by 80-foot section of the tarred wooden roof by a ventilation fan. Firemen gained control of the blaze within 15 minutes, but the roof was nearly destroyed. The accident most likely happened due to the presence of moisture within the mold during the pour according to workmen who were on the floor. Somehow no one was injured but the damage cost $5,000. 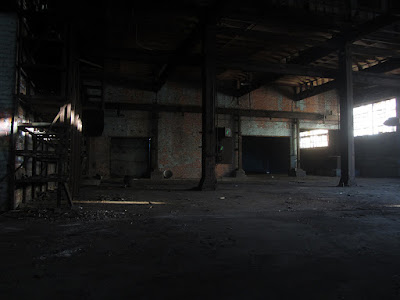 At some point the Crawfords left the Hubbard-Richard neighborhood and took up residence in the posh suburb of Birmingham, while continuing to operate their foundry in Delray. By 1980 however, the foundry was put in charge of a Mr. John McConnell; like Crawford he was another U of M graduate and past president of the American Foundry Men Society, who also lived in Birmingham. 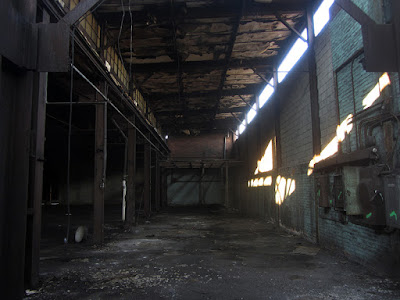 The aging Mr. Crawford dissolved the company shortly thereafter, and the entire foundry was put up for auction on May 5th of 1981, including the land, equipment, and buildings. An ad in the Free Press proclaimed Atlas to be "an extremely flexible and modern jobbing foundry," and listed all of the assets still on site, including a Lindberg heavy-duty melting furnace system (installed in 1967) with two channel induction furnaces, which boasted a melt rate of 1,500lbs per hour. There was also a 2,000lb Ajax melting furnace system and a 650lb Multiductor induction furnace, a 5-Ton per hour sand reclamation system (installed in 1977), a few 25-Ton traveling bridge cranes manufactured by Detroit's own Northern Engineering Works, several different blowers, compressors, jolt squeeze machines, grinders, etc. 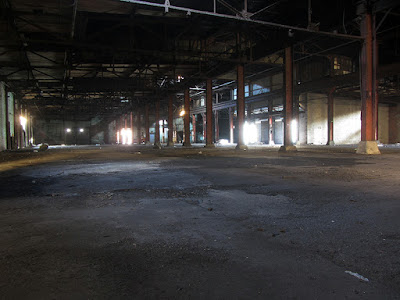 You can see a remnant of an old railroad spur in the floor here: 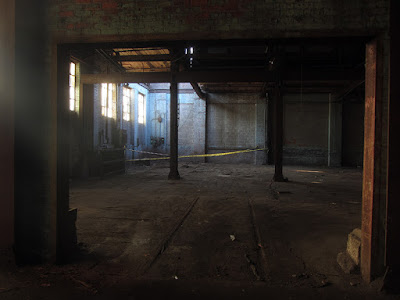 Mr. Crawford passed away at age 84, in January of 1987. He was buried in the family plot at Woodlawn Cemetery. Since then I imagine the foundry structures were used for long-term industrial storage or something along those lines, up until the present day. 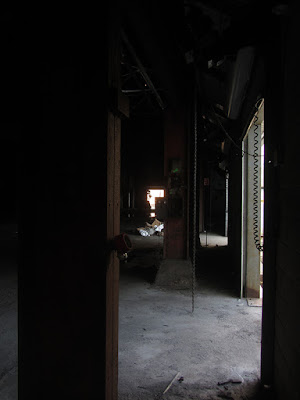 With the coming of the Gordie Howe International Bridge, I assume this handsome 100-year-old foundry is doomed to meet the wrecking ball since the plans call for wiping out pretty much all of eastern Delray for the toll plaza. If the developers could have demolished Historic Fort Wayne too I'm sure they would have, since the modern development philosophy seems to be "always start with a clean slate" so as to avoid having to think very hard about integrating one's project into its environment. Thankfully federal ownership, historic designation, and the presence of Native American burial mounds keeps Fort Wayne safe from such a fate, but it will now be totally surrounded by the new bridge's redevelopment area, making it even more isolated. 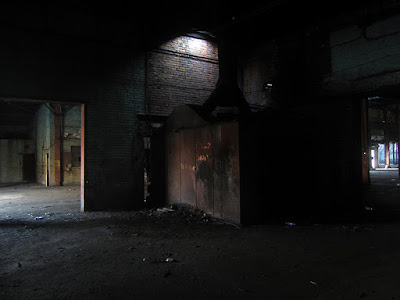 Pretty soon this view (below) will be no more...Atlas Foundry is on the left, and McLouth Steel's old Detroit works is on the right, currently being demolished: