So if you've been tuning in to nailhed.com since the beginning, you may have noticed that there was a crescendo of both increasing quality and increasing quantity in the posts that I was writing through 2014 up to like 2017...and then a slow, disappointing decline, and then almost like a sudden shutoff-notice in 2019, where I must have gotten evicted or something, because no one heard from me for like months. This will be my second post in the year 2020, which is down slightly from my peak production year of 2014, where I posted 293 posts. 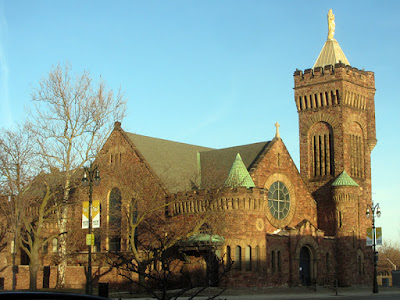 Well guess what, life is kicking my ass, and I usually have more pressing things to do than write. I'm tired. From everything. I still have lots of unseen photos however that I don't know what to do with. And since I don't have the energy or time to post insanely-researched historical contextualizations or incredibly witty stories to go along with them anymore, you're gonna see me return to a more "off the cuff," drinking-30min-before-I-go-to-bed style of composition.

For awhile I have been toying with the idea of doing a series of posts called "Houses of the Holy" to exhibit the multitudes of photos I have taken while visiting the many historic non-abandoned churches in Detroit. So I'm posting some random photos I took at Our Lady of the Rosary Church at the corner of Woodward Avenue and I-94 in Detroit, a church that I have always adored from the outside due to its incredible rusticated stone exterior. 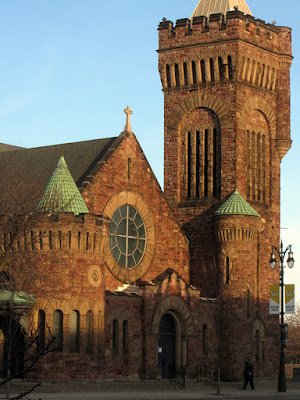 But since I am currently on Corona Virus lockdown along with everyone else in the D, I decided to farm Google Streetview for a couple of my exterior images of the building. I hope you don't mind. Maybe if there is a decent sunset tomorrow I will venture out and catch the warm rays lighting the stone walls up golden red. I guess I always took that for granted and never took a photo.
[Edit: see the two photos above]


I have fantasized about this church's interior for pretty much my whole life based on the deliciousness of the exterior, and assumed in my child's mind that the inside must be just as stony and austere as the outside, a perfect medieval fortress of Catholicism in the midst of a Midwestern American city.

Well, if that's what you were hoping for too, let me shatter that little fantasy right now, because the interior is nothing like the exterior at all, much to my disappointment. I was so excited by it that I decided to carve off a few minutes from my busy Fifteenth Sunday of Ordinary Time to sneak in for a few minutes at the end of one of those "Mass Mob" things they do in Detroit now, where a bunch of local Catholics from the region get together en-masse and celebrate Mass at a historic church in the city that has been suffering from a lack of parishioners, in order to give them a boost.

The photo above shows what I believe to be the original c.1884 chapel of St. Joseph Episcopal, built prior to the full church...the gold statue of Mary atop the tall tower came from Paris, France.

Considering that I am an agnostic ex-Catholic, it must seem a little hypocritical that I am so fond of churches, but in fact I regularly support several churches across the city by attending fish fries and other similar events besides actual worship. 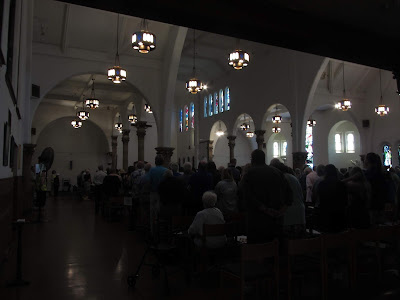 To my surprise this church was originally built in 1893 by Episcopalians. It was designed by local architects Malcomson & Higginbotham. Its original name was St. Joseph Memorial Episcopal Church, until 1907 when the building was sold to Our Lady of the Rosary Roman Catholic Parish (which itself had been founded in 1889, in a shack two blocks from Henry Ford's Piquette Plant). The Episcopalians moved up the street to 8850 Woodward Avenue, which is now the merged St. Matthew's Baptist & St. Joseph's Episcopal Church, which I have also visited.

During the devastating wave of parish closures in 1989, Rosary managed to cling to life by accepting refugees from St. Teresa of Avila Parish on the west side. 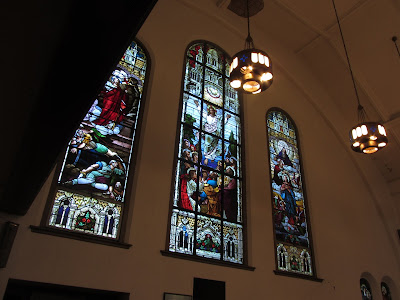 The walls and ceiling are now stark white, where they had once borne paintings of various religious iconography. It makes it horribly sterile in here but I'm sure there was a valid, desperate reason for doing it that involved a lack of proper resources. The windows are still impressive however. 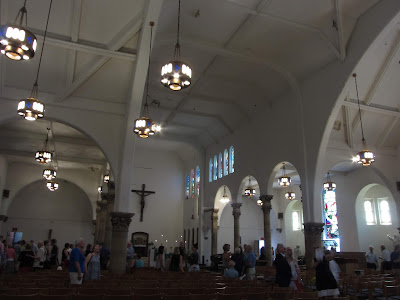 Speaking of the lack of parishioners here, there recently was an informative article in the National Catholic Reporter that explains how the Archdiocese of Detroit recently created a rift in this parish's congregation. They re-designated Rosary in 2017 from a church into an oratory, and they did so without consulting anyone in the parish. This led to unwelcome changes in the parish's program that have upset many members. It almost feels to me like an attempted regentrification of a church that had been firmly rooted in the community that has long existed just outside of the "Midtown" bubble and the so-called "rebirth" of Detroit.

Rosary used to have 25 or 35 people show up for Mass on a good day. Now attendance on Sundays is down to a third of that, with another third of the members moving across town to St. Charles Church, and the rest filtering out elsewhere. 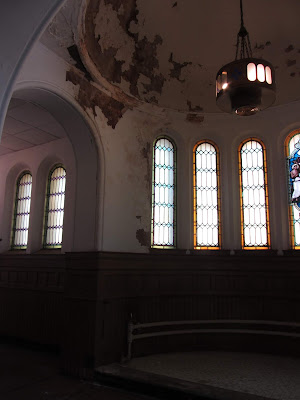 Those who moved to St. Charles Church call themselves "Rosary Refugees." They chose St. Charles because it's a Capuchin Franciscan community that "carries on the social gospel multiracial ministry that urban Detroit Catholic parishes such as Our Lady of the Rosary have been known for."

The Rosary Refugees said that before the re-designation, their parish was focused on the neighborhood, welcoming people from the street, and those in nearby homes for the developmentally disabled. That mission outreach has been curtailed however in favor of a more "pre-Vatican II theology," with the apparent intent of breaking connections to the way the church has operated in the past. 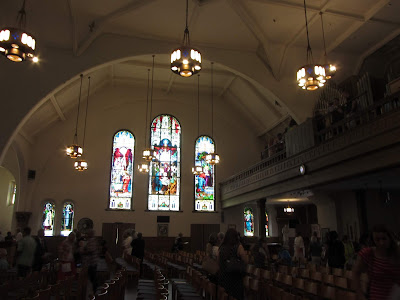 You and I might not notice a difference, the article says, but longtime Rosary parishioners see themselves as "exiles." The church's sanctuary "used to be a hubbub of social events," but the new administration wanted to force a return to "formal church worship." The new priests have done away with the sermons on social issues affecting the inner city, and have replaced them with "pious reflections on the Eucharist."

Ugh, this almost reminds me of that movie Sister Act, where Whoopi Goldberg's character gets in trouble with the old-school nuns for bringing contemporary spirituality to an old urban parish. 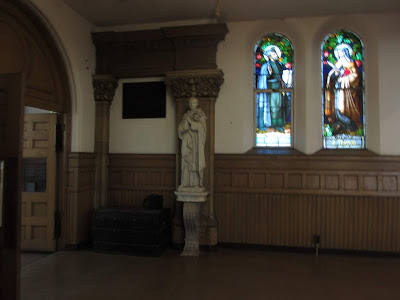 In 2018 a couple who decorated the church with Christmas ribbons "was told to put them away because the colors mimicked the LGBT-rights' banner." In a different incident a person who came in off the street was denied the sacrament of Communion after he was questioned on whether he was a baptized Catholic. Damn, that's hardcore! I mean this isn't the damn Basilica of St. Peter—it's a tiny, struggling old manger out in podunk Detroit! 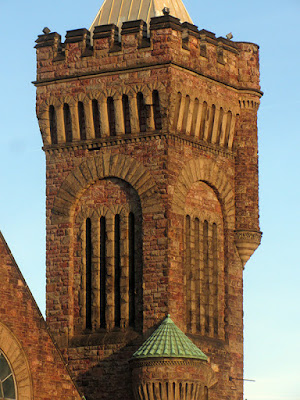 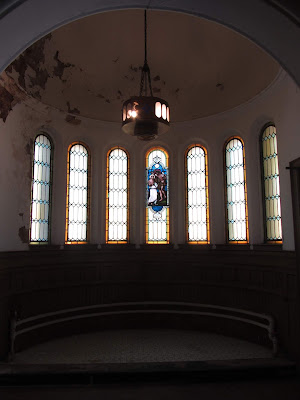 By the way there's one more interesting little tidbit of apocryphal info I might point out, regarding the strange tablet on the southwestern corner of the building. Even though the church sits at the intersection of Woodward and Interstate 94, the tablet seems to indicate that the corner is actually that of Medbury Avenue: 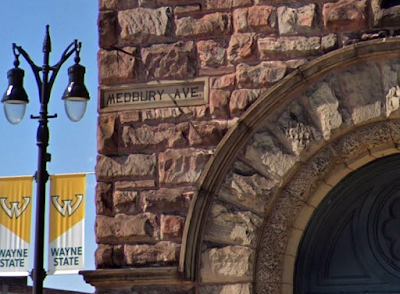 Now I realize that some of my readers aren't old enough to imagine a time before expressways existed, let alone a time when people didn't get their navigational instructions dictated to them by a "smart" telephone attached to the dashboard of their carriage by a suction-cup, or ever actually had to look at the street signs they pay for with their tax money, but this is a vestige of that bygone epoch of Precambrian Time when Medbury Avenue actually intersected Woodward. Have a look at some old maps some time...it might blow your mind.

Wellp, try as I might, I just couldn't get this finished in 30 minutes before bed one night...it took two. Hopefully see you soon in "Houses of the Holy" Part 2!

Email ThisBlogThis!Share to TwitterShare to FacebookShare to Pinterest
Labels: Houses of the Holy