There are other urbexy websites out there that have already covered the famous Phelps Lounge in Detroit, but the history they offer focuses mainly on the bar's most recent era, and the fact that it was where George Clinton turned the Parliaments into the Funkadelics. Another website even says that the structure at 9000 (9006) Oakland Ave. was built in 1945, which isn't true. Besides the funk-era history most people know about this venue, before that it was also a famous jazz bar called the Bizerte. In fact, the Phelps probably never would have been the Phelps if it hadn't already been the Bizerte.

Since one of my other unrelated hobbies is visiting crusty old neighborhood dive bars, I decided due to its significance to check out this one even though it was abandoned—and definitely not a dive in its day. 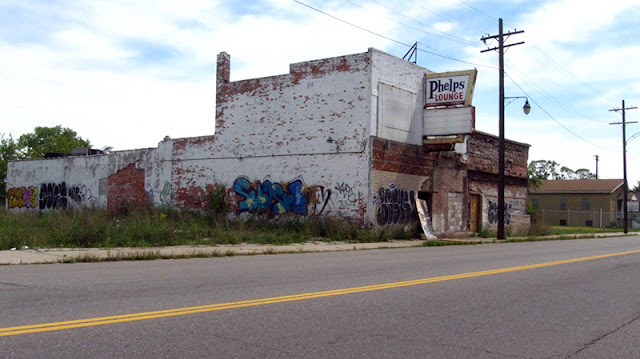 Before I get too far ahead of myself however, lemme state that it was known as the Academie Theater from 1921 to 1928, showing silent films. It also shows up on c.1915 Sanborn map of the area labelled as a moving picture theater, with a pre-1921 address of 636 Oakland. So it has been there over 100 years.

The long, curvy bar must have been super suave back in its time, but today it's falling apart: 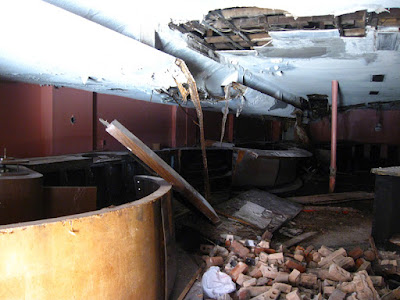 The book Before Motown: A History of Jazz in Detroit, 1920-60 says the Bizerte Bar opened around 1945, and was a spot for frequent jam sessions with the likes of Detroit greats Tommy Burnette, Edwin Davis, Youngblood Davis, Warren Hickey, Dave Heard, Phil Hill, and Alberta Adams. "Whoever got there first was the bandleader" for the night according to pianist Earl VanRiper. It was unorthodox; according to one patron it "had pretensions of being a nightclub but was really a neighborhood bar," sort of like the even more historic Blue Bird Inn on Tireman Avenue. Bizerte was black owned and patronized, but sometimes attracted young white talent looking to get into the scene, such as the now world-famous Detroit jazz singer Sheila Jordan.

Nearby at 8825 Oakland was Club Zombie, another famous jazz bar of Paradise Valley's North End in the 1940s, as well as the Royal Blue Bar at 8401 Russell, and Lee's Sensation at 1300 Owen Street. All of these have been demolished except for the Bizerte. The Apex Bar down the street at 7649 Oakland however still stands, although it appears to have recently closed and been cleaned out. It was where John Lee Hooker played his first Detroit gig, in 1943. 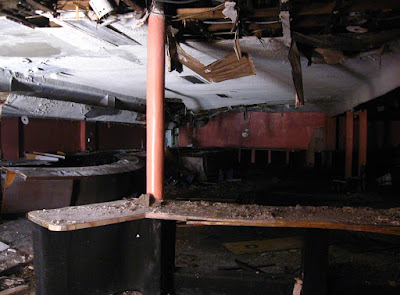 As it so happens, I am currently in the middle of reading the new book Jazz From Detroit by Mark Stryker, which also talks about the Bizerte Bar. The legendary vibraphone player Milt Jackson may have gotten his break here. He, along with one of the most progressive early jazz groups in the Motor City—guitarist Emmett Slay, bassist Millard Glover, pianist Willie Anderson, and drummer Art Mardigan—got the attention of international jazz icon Dizzie Gillespie while jamming at the Bizerte, although the date of this session is unknown. Milt Jackson soon moved to New York City to join Gillespie's band, later worked with Charlie Parker and Thelonious Monk, helped found the groundbreaking Modern Jazz Quartet, and carved his way into early bebop history. 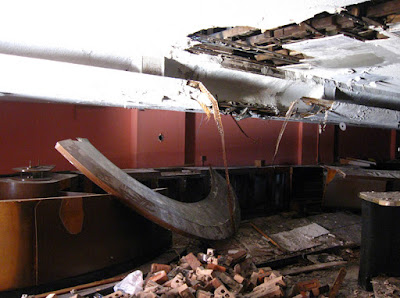 In 1960 the Bizerte was purchased by Mr. Eddie Phelps, a local promoter. It subsequently turned into an equally important hub for soul, funk, and R&B music over the next 20 years as it had been to jazz.

Of course there is the historic ten-day stand in the summer of 1968 by George Clinton and the Parliaments, where they morphed themselves into the Funkadelics in this very room, by pulling increasingly wild antics on stage each night. Those performances were what led to the strange visual act they have subsequently become known for. 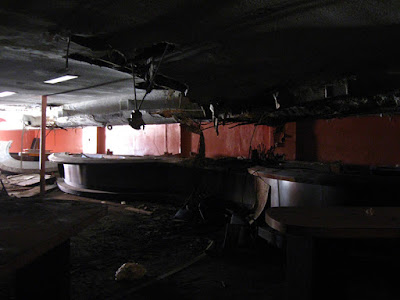 According to Detroit-based websites theconcertdatabase.com and detroitbluessociety.org, some of the other legendary acts that have appeared in the tiny Phelps Lounge during that time include Count Basie's Orchestra, Little Richard, Muddy Waters, Fats Domino, Gladys Knight, Otis Redding*, Ike & Tina Turner, Jackie Wilson, The Isley Brothers, The Temptations, Wilson Picket, and the godfather of soul—James Brown.

Detroit funk star Robert Jay recorded his album Alcohol there in 1973. In an interview with him on heavyweightfunk45s.com, he said that "You might call it the class-A nightclub in Detroit at that time."

A funny story on the message board soulfuldetroit.com recalls when Mr. Phelps allegedly refused to pay the talent one night when Benny Benjamin overtabbed his bar bill. Benjamin "put his gun on the table to prove his point," and then "Joe Hunter, Robert White, and Jamerson also pulled out their guns." Mr. Phelps was so rattled "that he not only paid those guys...but even paid Benny." 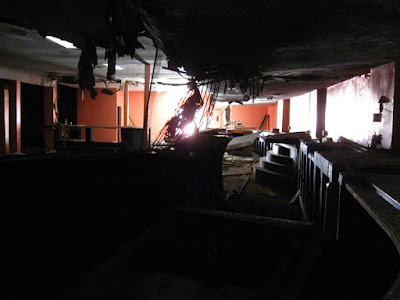 The January 7, 1978 issue of Billboard Magazine featured an article saying that Eddie Phelps had come out from Detroit to promote a nine-day stand of performances to rescue the famous black landmark Apollo Theater in Harlem, which had previously lain dormant for 18 months. Mr. Phelps expressed his belief that historic venues such as the Apollo ought to be preserved at all costs, due to their value to the community. He also said that the dereliction of the Apollo was "not just a Harlem problem," but "a national problem" (how ironically correct he was). The article went on to note that his Phelps Lounge had become a black landmark in its own right, "an almost mandatory stop for touring soul performers for almost two decades."

The short stage is there, in the darkened back corner (shoulda used a flash): 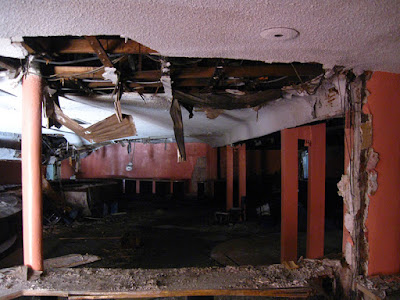 Another book about soul artist Little Willie John refers to Eddie Phelps in passing, noting that he was considered something of a "Mr. Big" in Detroit, and could be listed as a "performer's benefactor" (which in the case of Willie John, included helping them out of legal trouble). 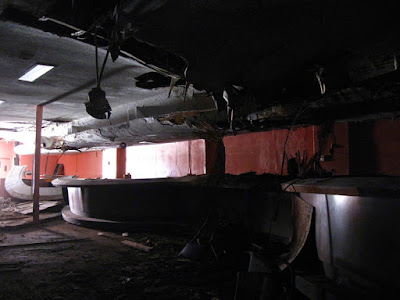 The last show listed at theconcertdatabase.com for Phelps Lounge was November 23, 1980, with B.B. King and Bobby "Blue" Bland. I want to imagine that King's wailing guitar brought the house down at the end of that final show, but it sounds like the sudden end of the Phelps may not have been planned. A 1981 issue of Living Blues that I found via Google Books says that the venue was "recently victim of a fire, allegedly set by a rival club owner."

*Otis Redding's second cousin, Johnnie Redding, went down in Detroit infamy as "the man frozen in the ice" on the front page of the Detroit News in 2009.