Flour Power in the History Hour

Despite the extremely mundane appearance of this series of structures at 17th & Warren Avenue on Detroit's west side, the land they sit on has a bit of a history to it. 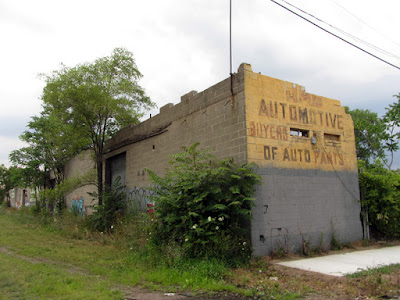 The last use seems to have been Jag Auto Parts salvage house (judging by the painted sign on the wall), but some of the structures standing here suggest a much older origin. For what it's worth, Bull Auto Parts still operates just on the other side of the railroad tracks from here.
The buildings seem to form a sort of a horseshoe shape, enclosing something like an open courtyard space in the middle: 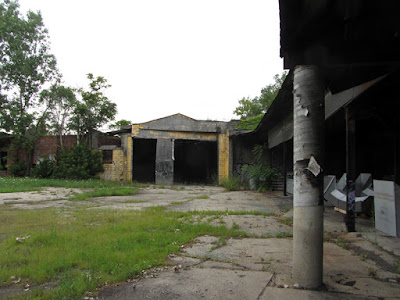 Immediately upon entering we realized that despite the decrepitude, this place was still being (or had recently been) used for storage, of some unusual metal parts... 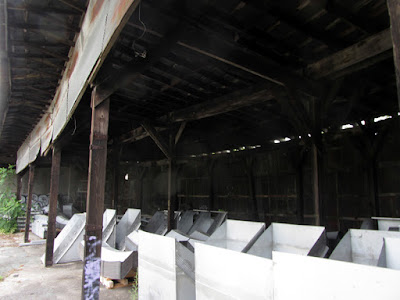 I thought maybe it was ductwork, or highway guardrail parts, but that explanation still did not really hold much water. At the time I was almost more interested in guessing the age of this seemingly very old lean-to wooden shed structure. 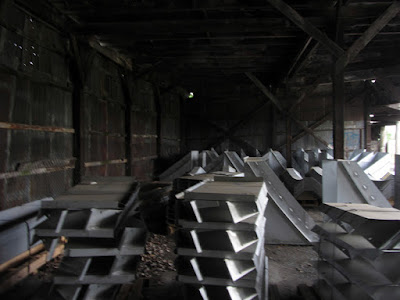 Later I figured out that these were prefab parts for a new gentrified "experimental live/work community" called True North, Detroit that would be built nearby a few months later. So basically it's a bunch of fancy Quonset huts, with stuff like yoga studios in them. It looks strangely like a scientific outpost in Antarctica or something. 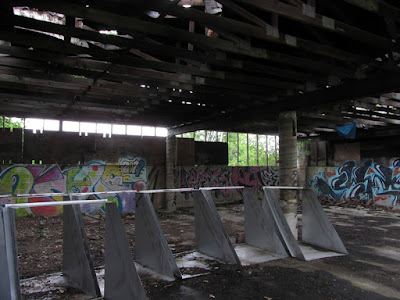 In the distance are the steeples of St. Leo's Catholic Church: 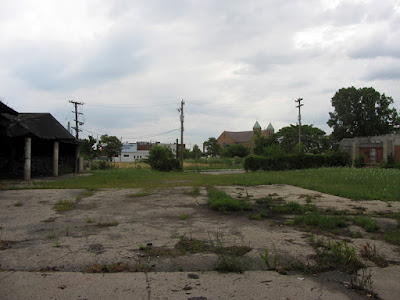 It would appear that there are some older industrial portions to this facility than just the cinder-block part seen earlier. 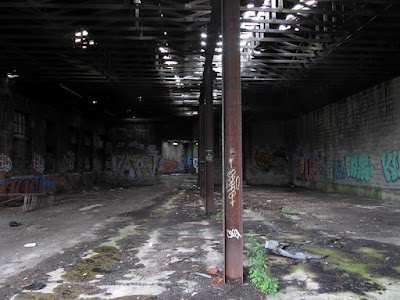 The c.1921 Sanborn map showed the "David Stott Flour Mills Inc." as being on this spot, as well as totally covering the entire block on the other side of 17th Street.
It had been founded in 1879 by David Stott (yes, the same guy who the Stott Building downtown is named after), his Stott Flour Mills was a leading supplier of flour in old Detroit, and he owned a few different mills at different locations. He came here from England at the behest of his uncle in Detroit, George Brown, and started in the flour milling business. That was where David Stott made his money, and first put his mark on Detroit. Naturally, like any good tycoon, Stott later branched into real estate. 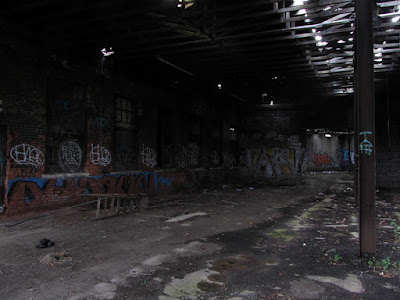 Stott's first small flouring mill was at the north corner of Grand River & Wabash (now a vacant field), and he rented some land around it to farm. He quickly had to enlarge his mill, twice, and finally built the one here at Warren & Grand River, less than a half mile up the road from that first location. 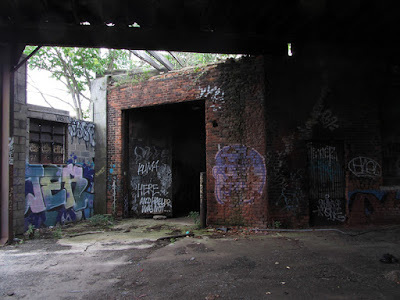 The c.1884 Sanborn map of the city showed nothing on this spot yet, but there was the "Canada Malt House" operating just on the other side of the train tracks (which were labelled Grand Trunk RR and Lake Shore & Michigan Southern RR back then). 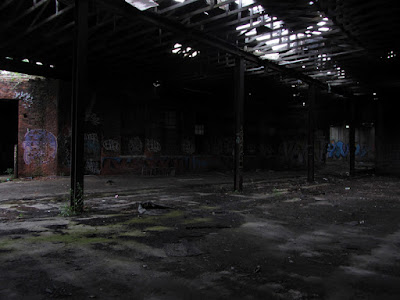 I turned ahead to the c.1897 Sanborn map. The train tracks were then labelled Detroit & Bay City RR (Michigan Central System) and Lake Shore & Michigan Southern RR. Similar structures were shown on this map, possibly some of them are the same structures that stand here today, but the David Stott Mills was then limited to the east side of 17th, while the structures on this side of 17th were labelled "Bailee Bros. Coal & Wood Yard." That business had coal and wood sheds along the tracks, as well as a warehouse for "sacks & barrels of flour" in the middle that is no longer present. Rail spurs ran throughout the site. 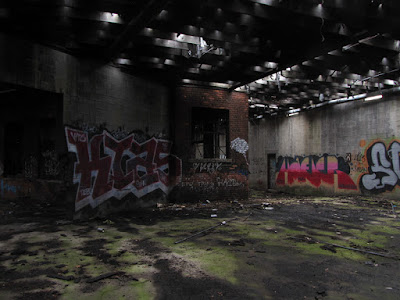 By the time of the 1921 map there were even more rail spurs than before; a total of six sidings—three for the mill and three for these sheds.
These buildings were labelled on the map as "coal bins," "barrel storage," "flour warehouse," and "vacant." The actual mill and elevator was on the other side of 17th street, featuring four 28,000-bushel silos, a water tower, a rye & corn mill, wagon houses, feed packing houses, etc. 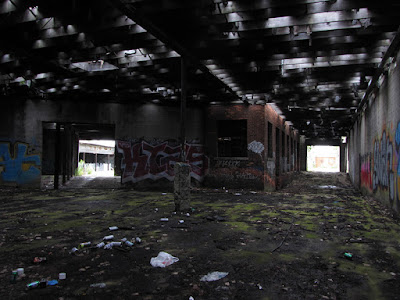 According to David Stott's obituary, his operation was one of the largest flour mills in the Midwest. He was one of the city’s largest property owners at the time of his death on June 4, 1916 and lived at 1700 E. Jefferson at time of death. So basically he was like Dan Gilbert, except he didn't own 90% of downtown, the mayor, and a basketball team in Ohio.
The Stott flour business continued for many years under the management of his son. 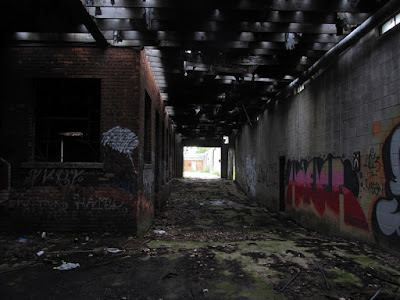 This photo shows the former office building of Stott Flour Mills, right at the corner of Grand River & Warren:
Look close and you'll notice that the Grand River Station of the Detroit Post Office, and a Peninsular State Bank branch also shared space on the building's first floor.
This next one is a close-up of a bill of goods (with a nice engraving of what the mill looked like) recording a sale of one single barrel of flour sent to Portland, Maine in January of 1913...I can't explain why those Yankees couldn't find any flour closer to home, or why they just ordered one barrel, but there you have it:
"Y'evah run the pickah? 'Cause of the heat we only run that suckah through the night...11 to 7...the graveyahd shift." Sounds a mite fishy t'me mistah, ayup.
But looky here...
Now that is an image I got from an original 10x12 negative showing the Stott Mills, thanks to a friend and fellow researcher, Rob Klatt (and it is in positive thanks to my friend Yaz's handiwork). Unfortunately the buildings we are exploring would have been in the blotched-out area to the far right. 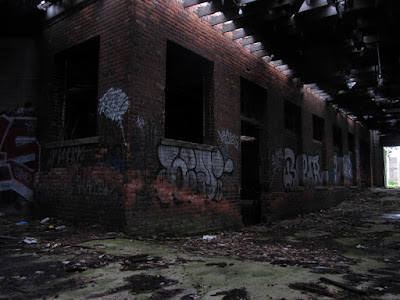 The Stott Mills burned down in 1943. Honestly, fire is a common thread in the history of pretty much every old flour mill, so no surprise there. The mill was no longer operating at the time of the fire. 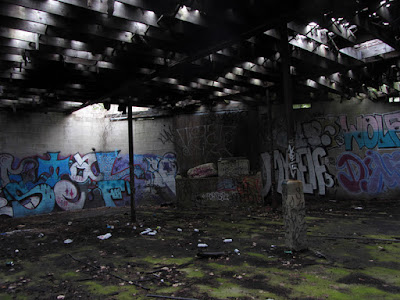 Apparently it was not totally burned down, because it burned again during the 1967 Rebellion. On the Detroit Historical Society website, there are three photos showing remains of the David Stott Flour Mills and other fire-damaged storefronts along the south side of Grand River Avenue between 16th and West Warren, after a fire consumed all of them during the riot:
In this next shot, the name "D. Stott" appears above the ruined doorway:
And here is a photo showing the carnage from above; although the actual mill structures are mainly outside the photograph, it seems they might have escaped harm: 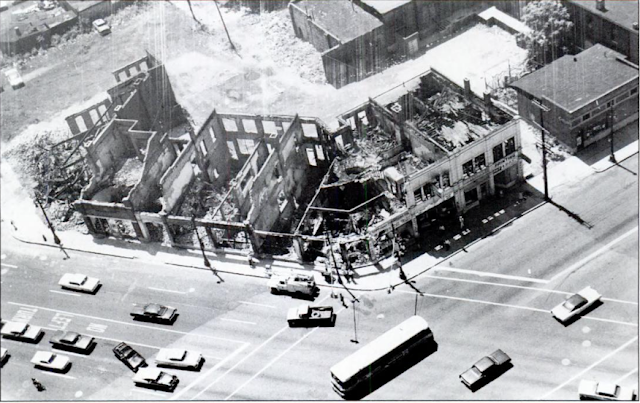 Today the spot where the mill stood is still an empty field since it burned down in 1967:
The buildings I explored were the ones seen between 17th and the railroad. As an unrelated side note, I once took a seminar on historic masonry techniques in the former bank building on the corner of Warren at Grand River, and I frequented the former Architectural Salvage Warehouse on the opposite corner. 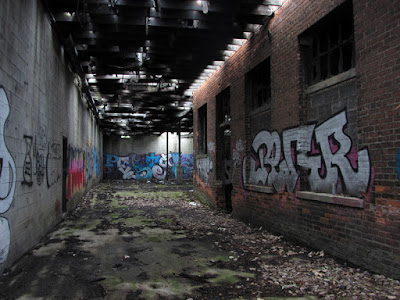 It is easy to wonder about how the layout of this facility has been changed and modernized...with this 100-or-so year old brick building being surrounded by a much newer cinder block wall and covered together with the same roof structure, it isn't hard to imagine that it could well have been part of one of the historic buildings that once stood here, such as the Stott Mills, or the Bailee Bros. Coal & Wood Yard. 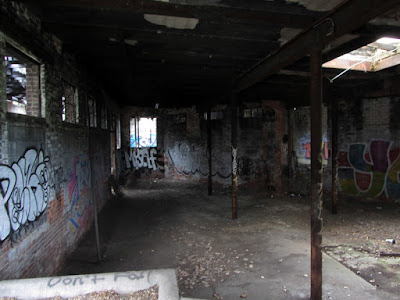 The rectangular portals in the ceiling suggest there was once a second story that was removed at some point. 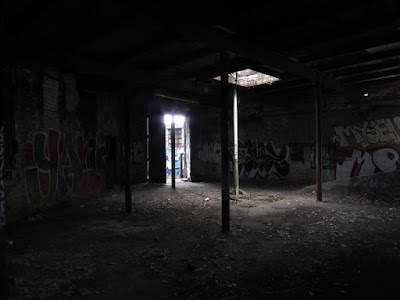 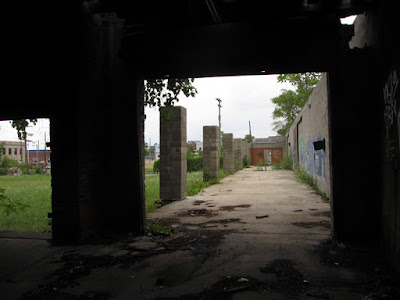 Recall from the Sanborn maps that this open grassy area once contained a series of railroad spurs. Another look at the wooden sheds: 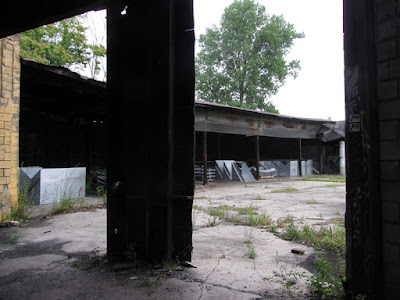 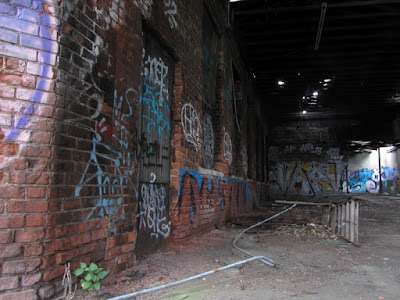