Photos are mostly from 2004, scanned from 35mm prints. 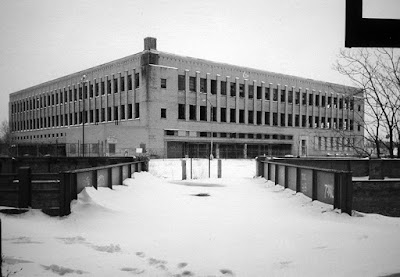 Teacher: "Fine, I'll check the official administrative log and show you you're wrong. See? No changes have been made since the big update on November 5, 2017. Now everyone turn to Chapter 4.5...today we will be reading about how Chancellor Barack W. Obush brought us hope and change." 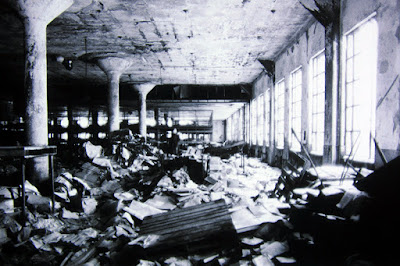 Detroit has a way of letting things go to waste that is unparalleled anywhere else in the First World. The mountains of DPS textbooks that were mostly incinerated in the fire that consumed the Roosevelt Warehouse's upper floors--and subsequently returned to their primordial pulp in goopy, melting mountains--certainly looked like another of Detroit government's acts of colossal wastefulness, in an era when the complaint was always that there were never enough textbooks to go around in our city's failing public school system. It was certainly the fodder for more than one internet poster's melodramatic commentary at least, decrying the fact that millions of books were left to rot when there aren't enough in the classrooms. 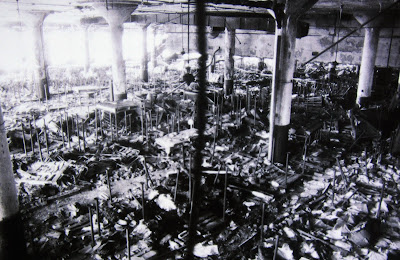 But I'm not sure that was ever necessarily proven, that they were "left to rot;" and even if they could have gotten them out of the warehouse and into the classroom they were probably "out of date" already anyway. I don't think there is any more need at this point to explain the incompetence and wastefulness of Detroit's civic leadership. But I will admit that as a lover of the printed word, the sight of any book going to waste is distressing, certainly.

The fictional dialogue above must undoubtedly be the direction our society is headed in; already many "forward-thinking" communities have completely digitized their schools' curriculum. What kind of safeguards are going to be in place to ensure that the loss of the printed word does not also signal the loss of intellectual freedom? The entire basis of scholarship--and thereby, of free thought--rests on the existence and proliferation of paper books as an unalterable corpus of discourse, and record of historical occurrences from which we as a race are meant to learn by our mistakes, and those of our forefathers. 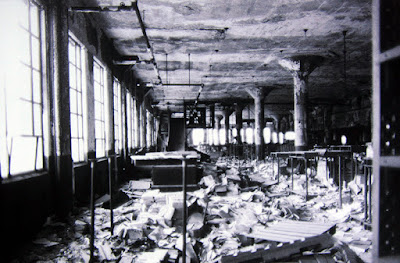 The works of warning such as George Orwell's 1984 and similar novels are so close these days to changing from fiction to non-fiction that it is almost as if our "elected leaders" have used them as a roadmap to effecting our oppression. Who here can look at the Wikipedia hits that top any Google search and not immediately think of the "Ministry of Truth," who mindlessly whitewashed "corrected" historical documents, and the "memory holes" into which they then tossed out the original copies to be destroyed? 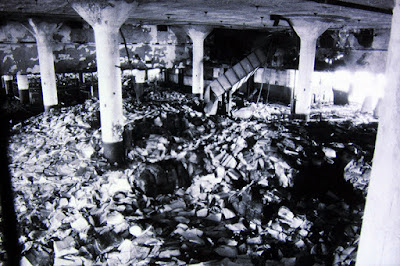 With this endless digitization of all our materials, and the gradual elimination of book printing, what will stop them from becoming just like any Wikipedia page, alterable in secret by whomever "holds the keys?" For that matter, who holds "the keys" to the Google search engine algorithm that always points you to a Wikipedia hit first? Who holds sway over access to the Internet itself? All of these digital resources have one thing in common that makes them different from books: they, and anything on them can plausibly be altered in any way, at any time, across the board, without anyone noticing except those who have the access to the controls (or the coffers to bribe those at the controls).

Books do not have this weakness. 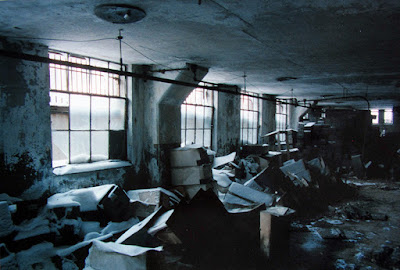 Books, papers, and the fact that our numerous libraries make them available to the Everyman are part of what safeguarded our intellectual freedom up until now, because it provides for there to be a circulated "hard copy" for anyone to be able to fact-check (and cross-check) any historical event, law, or intellectual treatise without worry that it has been tampered with by some political, religious, or corporate interest. Any attempt at "re-writing history" would be faced with an insurmountable task, or at least a whole lot of book-burning parties...and one would think that that would hopefully not go unnoticed by those who remember what the Third Reich did. 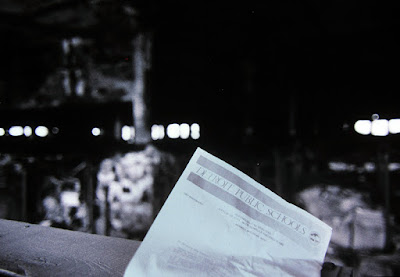 Yes, digitization allows for easier access to knowledge, no one will dispute that; but it also opens it up to be more easily altered, and thereby perverted to evil ends. I mean, far be it from me to posture as some paragon of scholarly virtue, nor am I insisting that just because something is on paper makes it "true," or "correct," but we must always question the sources of our information, and the media through which it is delivered. 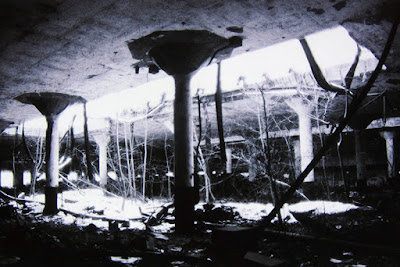 The best part of this building was definitely the "terrarium," as the residents of the building called it—a series of elongated roof monitors, some of which had caved-in during the 1985 fire, allowing tall birch trees and thick brush to grow in the ashes of the burned books underneath the openings the fire left in the roof. Most of the trees had grown to heights of over 15 feet, meaning their tops were now peeking through onto the roof. 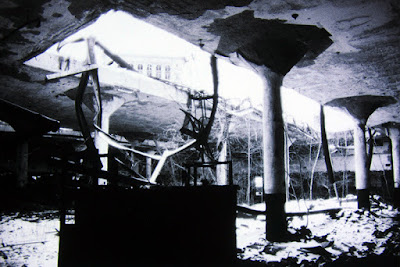 They were bare of leaves now, but in the summertime they blocked the opening with their full crowns. Kicking the snow away, one could see that the soil of the "forest floor" here was made up of millions of charred black scraps of textbooks between the tree roots and fallen leaves, print still visible on many of them, as if I was stepping through the basket of a giant paper shredder. Tree of Knowledge indeed; these saplings were literally nourishing themselves by driving their roots into the mouldering pages of history books.

A brief (alterable!) history of this building follows. 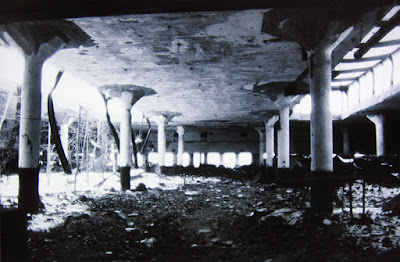 Built in 1933 and designed by Albert Kahn, this structure was originally named the "Roosevelt Park Annex" to the United States Post Office of Detroit, with an address of 2025 14th Street. The Sanborn Map c.1921 shows a number of old frame houses on the block where it now stands, with the Blodgett Engineering & Tool Co. occupying the corner of 14th & Dalzell. When the U.S. Postal Service stopped using this building, it was taken over by Detroit Public Schools, who used it as their main warehouse, which is how it came to be called the "DPS Book Depository," although I believe it was always officially called the Roosevelt Warehouse. 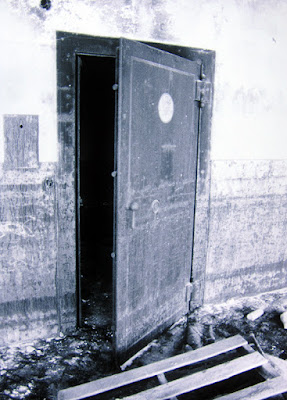 Allegations surfaced in October of 1974 that excess, or "new but obsolete" school books were being disposed of without sending them back to the publishers or to other school districts. Three employees of the warehouse came forward in the Detroit Free Press to corroborate the allegation, saying that approximately 300,000 excess new books per year were either given away to anyone who asked for some, or they were trucked to the city incinerator to be burned.

Despite denials by warehouse management, a subsequent sting operation by the newspaper and by school officials proved that books were indeed being given away freely. 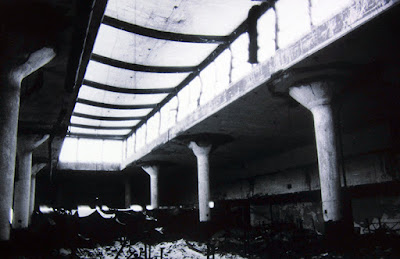 A year later another investigation looked into allegations that materials were routinely being pilfered from the warehouse occurred in March of 1975, but after spending $22,000 on the investigation officials could only find $25 worth of cafeteria sugar missing. They did also learn however that the ink in 6,000 of the new ball-point pens stored there had dried up.

Besides the terrarium on the top floor, the basement also held an unexpected surprise. The stairway abruptly ended in mid-flight, taken over by several feet of ice from a flood that had filed up the entire basement! You can see just how deep it is by the fact that it is up to the doorknobs in the hallway: 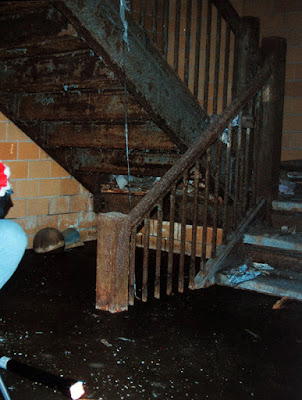 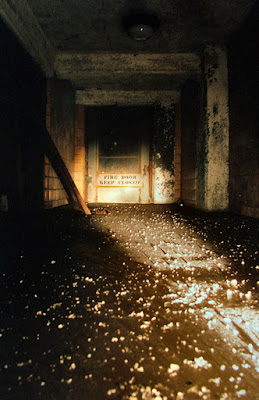 It was one of the most bizarre experiences ever to have to crouch to walk through an 8-foot-tall hallway without bumping your head on the ceiling lights, and then not being able to open the door at the end because it was totally locked in ice. 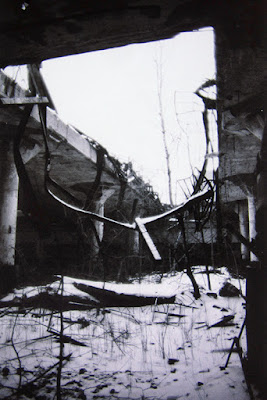 On March 4th of 1987 this building had caught fire and was destroyed, in a blaze that took 100 firemen to control, the Free Press reported. It started on the second floor on a Wednesday morning, while 75 employees were at work inside, and was being investigated as arson. The fire spread quickly and reached the top floor, where the heat from the mass of burning paper caused the building's steel skylights to melt and cave in, resulting in these tree-filled terrariums that we see today. Battalion Chief John Brycz suffered three broken ribs in the attempt to save the building, which continued to burn for several days, if I recall correctly. 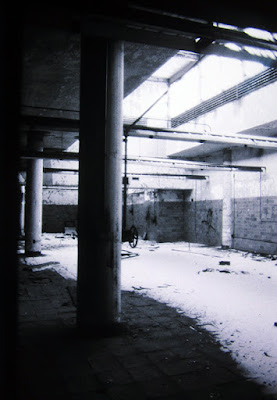 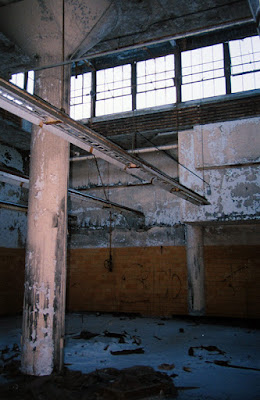 The article stated that besides textbooks, the building contained school records going back to 1918 (most of which were duplicates) at the time of the fire. Employees had complained just a few weeks ago that the building's fire exits were kept chained shut, reportedly to prevent thefts. A subsequent inspection resulted in the chains being removed. The warehouse supervisor later claimed that the doors were never chained. 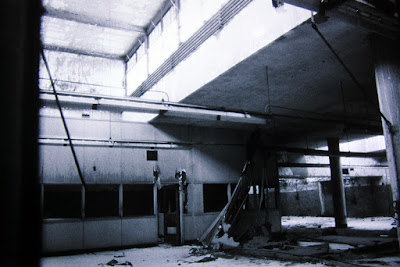 Even as early as 1990, there were newspaper articles decrying the waste of the piles of new books being stored in this warehouse, having never been used. Not only was it books, but all other school supplies too, such as erasers, carbon paper, notebooks, binders, typewriter ribbon...all new-in-box, all sitting in limbo, becoming obsolete. So it would seem that when it was being decried in the late 2000s around the time that the body of Johnnie Redding was discovered here frozen in ice, it was already tired old news. 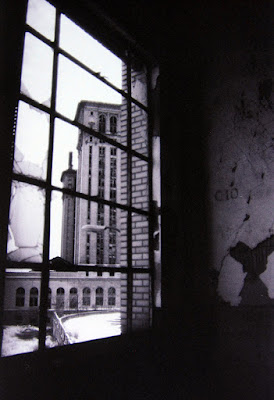 Here is one of the collapsed skylights that was melted by the fire, seen from the roof: 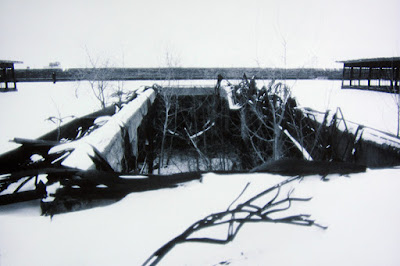 I wrote another entire post on this website dedicated to the confusing tale of how Johnnie Redding died, how he was discovered frozen in the ice of this building's basement, how it spurred a media circus that helped change the course of Detroit's history, and my own involvement in the events that unfolded...to read it, click here. 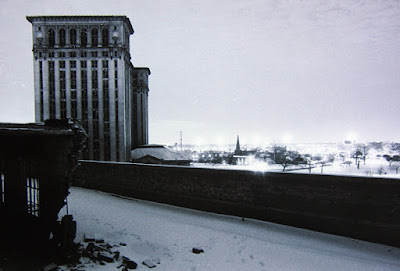 A wintry nighttime view of the downtown skyline from the warehouse's roof, including a still-standing Tiger Stadium: 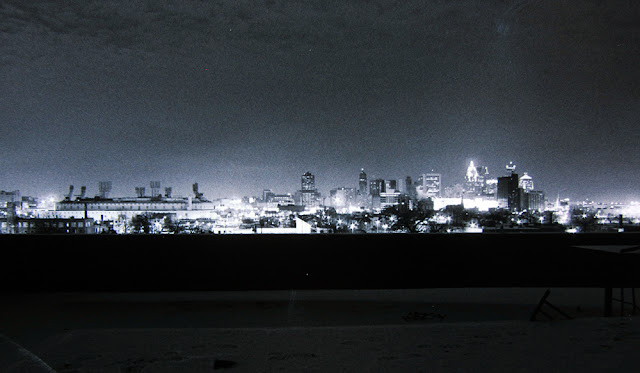