There's just something about "those skinny buildings" that makes them intriguing... 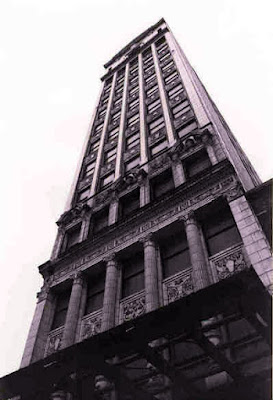 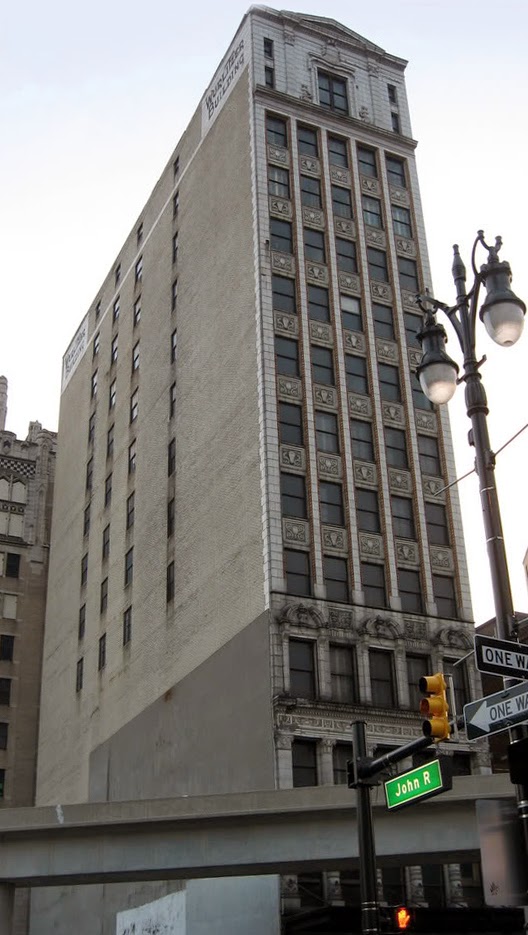 So naturally the Wurlitzer Building, due to its narrow shape, had always sparked my curiosity. We were chugging along through the "Dirty Dozen" list, but we probably would not have a long window of opportunity to hit the Wurlitzer so we pounced on it. 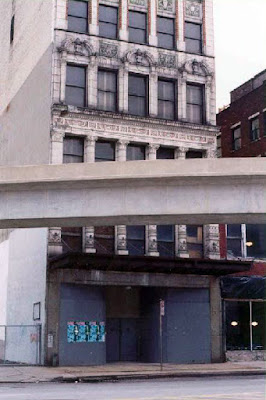 It stands 14 stories, and was the headquarters of the Wurlitzer musical instrument company, who were most famous for their iconic theater organs, jukeboxes, and pianos. Many of the grand old theaters in the city (especially around Grand Circus Park) had originally been equipped with Wurlitzer organs, so it made sense to have an office here. 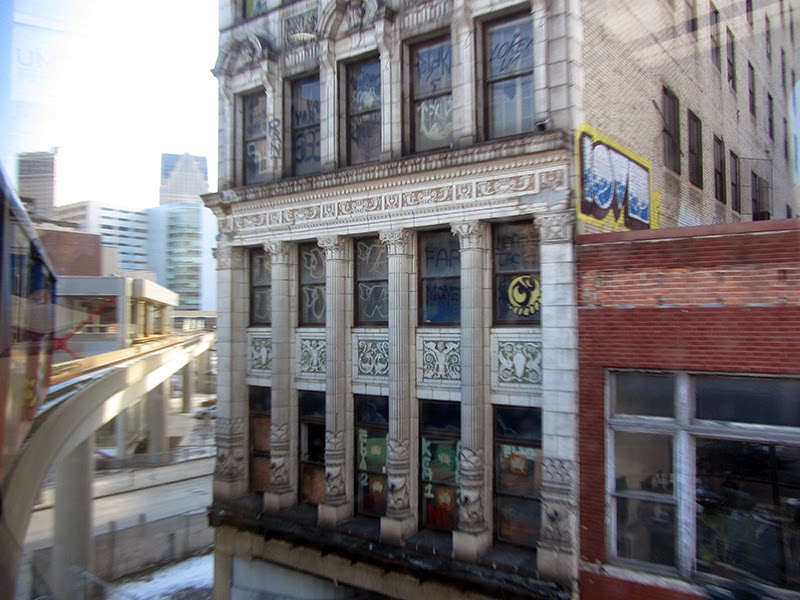 This building was designed by Robert Finn and opened in 1926, and it's honestly a little hard to find info on the just building itself (as opposed to the company on the whole), but according to detroit1701, Wurlitzer built over 2,000 pipe organs, and installed 86 of them in Detroit. The best known of these organs were located in the Fox Theater (which has two), the State Theater, United Artists' Theater, Masonic Temple, Detroit Opera House, and Fisher Theater, but even a couple churches like St. Charles Borromeo and the old Ss. Peter and Paul Church had one. 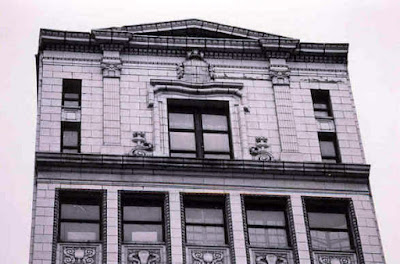 The Fisher Theater's massive Wurlitzer was removed during the 1960 remodeling butchery of that 1928 theater, but it was thankfully acquired by the Detroit Theater Organ Society, who still use it regularly for concerts and silent films to this day (that I much enjoy), having shoehorned it into the tiny Senate Theater on Michigan Avenue. There are some great photos of the original Fisher Theater interior HERE. 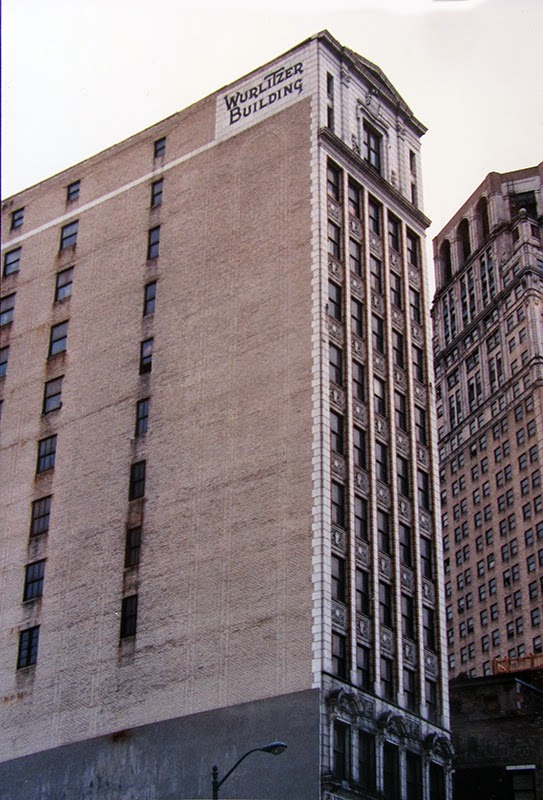 The Fisher Theater's 4/34 "Mighty Wurlitzer" was the eighth-largest ever built by that firm, and according to the DTOS, represented "the first serious attempt to incorporate in one instrument, under control of one console, the varied tonal elements necessary for both cinema and concert work." As a matter of fact the largest Wurlitzer ever built was also installed in Detroit, at the Michigan Theater, which is now more famous for the fact that it has been brutally turned into a strange parking garage. The organ, a 5/34, was removed in 1956, and moved to a home in Racine, Wisconsin.

The Wurlitzer company fizzled in the 1980s, and their Detroit office was tenanted for a while by other occupants, but the building had gone dark by the mid-1990s. 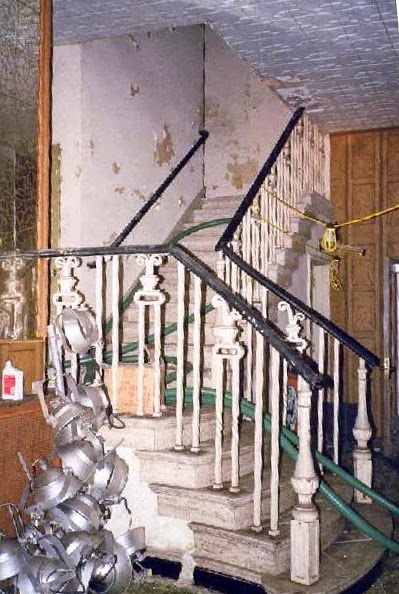 Getting into the Wurlitzer Building was usually pretty easy, when it was accessible. The lobby was tiny and anticlimactic, though it had its charm…despite having been 1970s-ified. The elevators' snazziness was nice too. A marble staircase with an ornate banister wound upward.

There was plenty of random junk to be found here, a set of stage lights, and some renovation equipment from a tentative, or seemingly failed effort. It was also evident that the flooded basement had once seen an attempt to pump it out, but it had already filled back up to the brim. That this place had an incredibly small floorplan became readily apparent. It took mere minutes to cover each level. 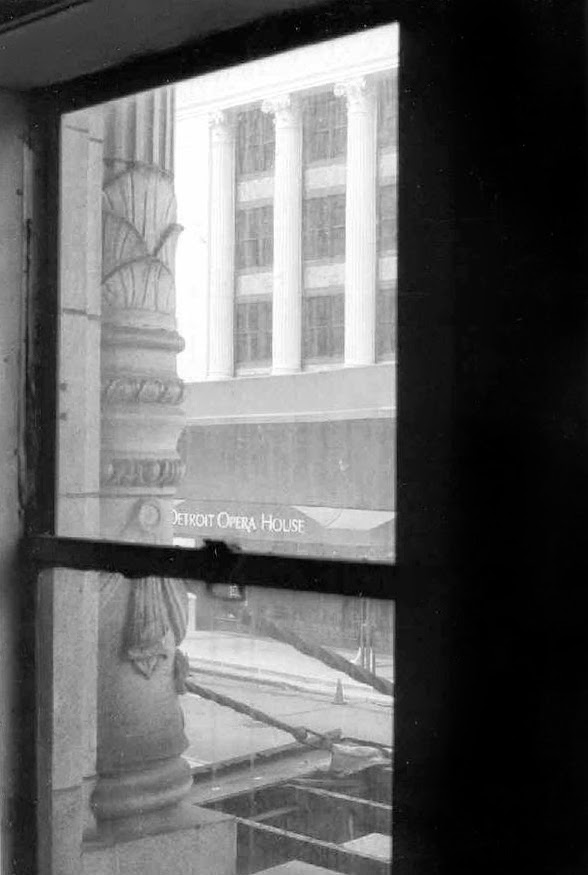 On the second floor, we found some religious choral sheet music, but against my hopes, no musical instruments. There was one floor that was filled with boxes of old books, but most of them were the typical Reader's Digest stuff...those seem to be the most commonly found books in any abandoned place I've been to.

The place was not all that scummy or deteriorated, and the windows were closed and unbroken—a good sign. Mere feet away from the beautiful ornamentation on the building's façade, the Detroit People Mover cruised by (usually empty of passengers), about every ten minutes. 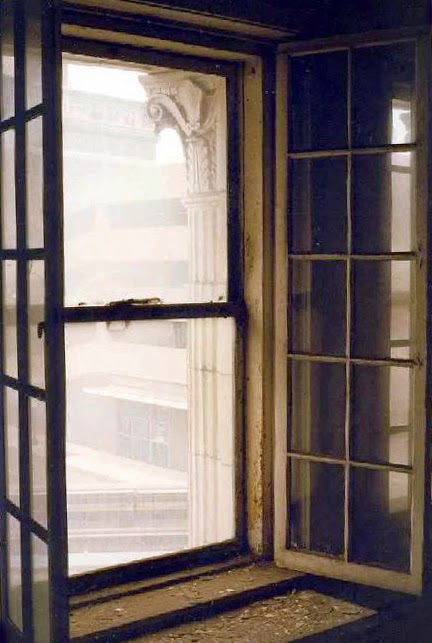 At the rear of most of these floors was the fire escape exit, and above the door was a very cool glass globe that covered a light and was marked "EXIT." Through the dirty back windows one could see across the alley to the wall of the Metropolitan Building, a stunning cathedral-looking thing, completely faced in decorative terra-cotta. 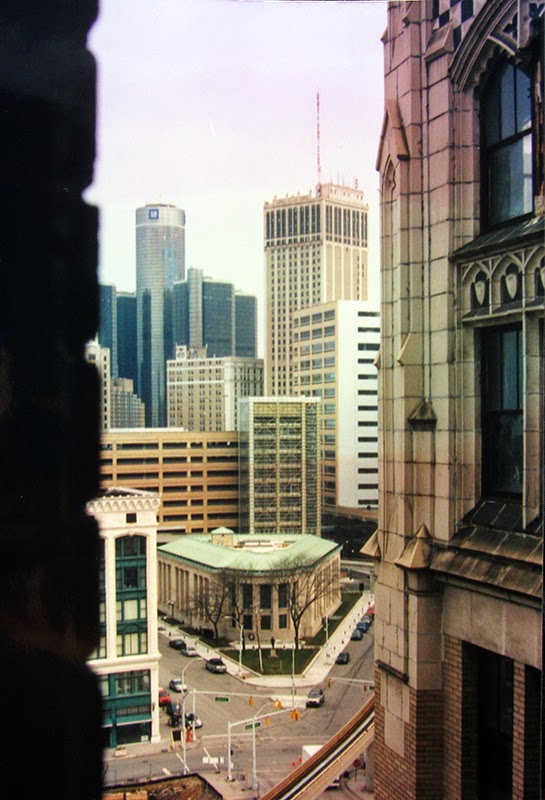 The Wurlitzer Building not only housed the local sales and service offices of the musical instrument company, but there was also floorspace dedicated to musical lessons. The book Fifties Jazz Talk: An Oral Retrospective, by Gordon Jack mentions that local jazz legend Frank Isola took drum lessons here in the building on Saturdays in the mid-1930s. 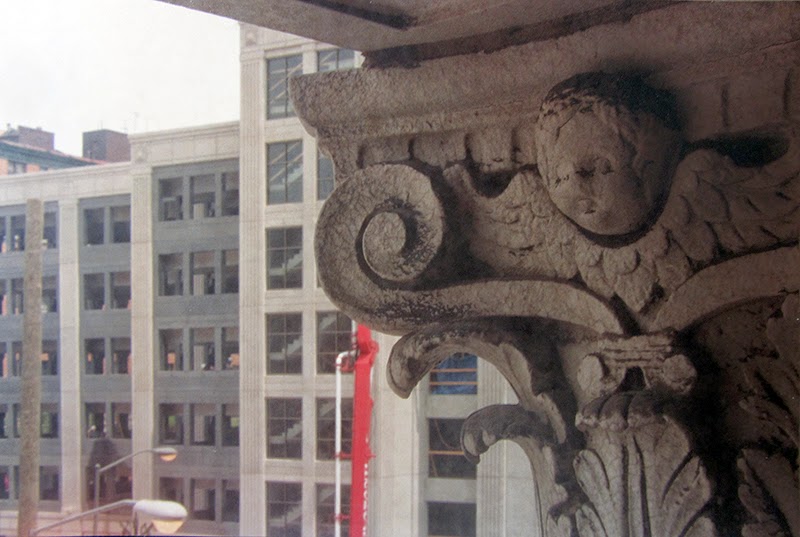 As the story goes, Isola saw Gene Krupa and Benny Goodman play a show at the Fox Theater when he was eleven, and decided to become a jazz drummer. Like many Detroit instrumental greats such as the Funk Brothers, Frank Isola has backed many legendary musicians in the recording studio but has himself gone largely unknown. One can only wonder how many other to-be-famous musicians may have had their first lessons here in this building as well. 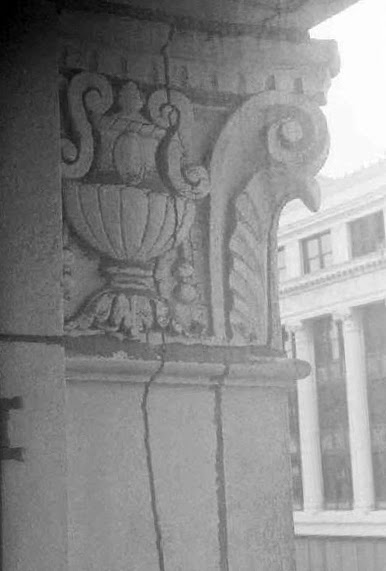 One of the problems with photography from this building was that most of the windows wouldn't open back then, so I ended up shooting through a lot of dirty security glass. But I like the view down Broadway in this next photo, because it shows an almost totally different world in 2004 than what is there now...you can see the old Opera House Garage on the left, the Broadway Exchange Building at center, the new downtown YMCA hasn't been built yet, and the old "Broadway-Randolph" mural is still visible on the side of the Lafer Bros. Building: 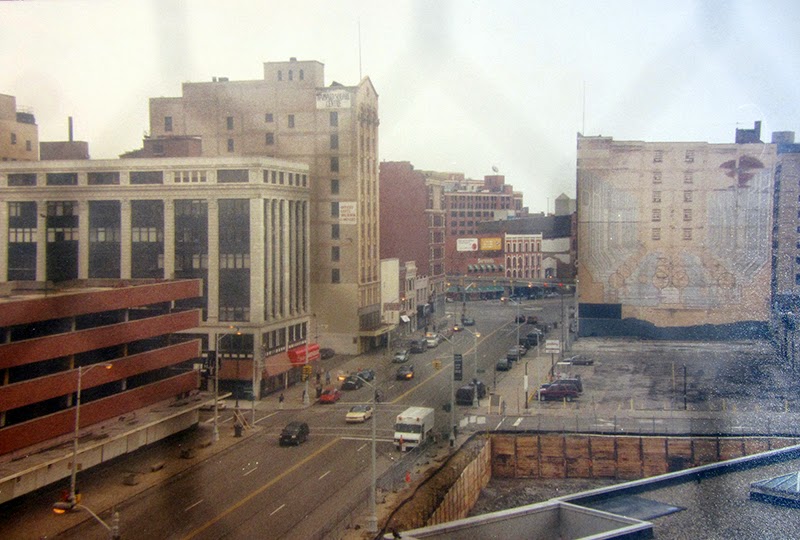 On about the 12th floor, I noticed a strange thing. Now, if you were to walk into a janitor's closet and see an extremely taut come-along strap, fastened around the thick porcelain drain of an industrial sink, with the other end leading out the open window, what would you think? I called a buddy over to see this, to make sure I wasn't tripping, and we both went closer to look out the window.

It took me a minute to fully realize what I was looking at, but the frayed, over-stressed ratchet-strap was definitely being used to keep the iron fire escape stairs (which were so decrepit that several sections of them were hanging loose from their moorings), from falling off the back of the building in a Loony Tunes-esque waterfall of rusty, jumbled iron. Classy. 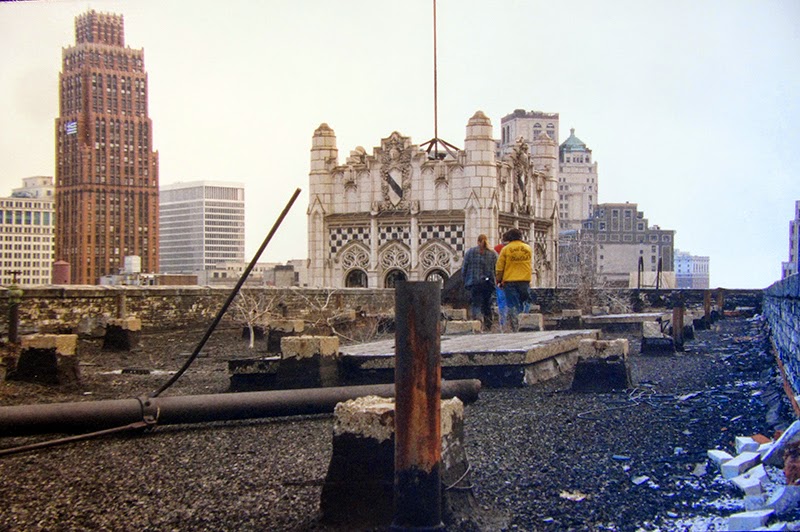 We went to the roof before seeing the top floor for some reason, possibly the unbearable stench of warm pigeon shit scared us away. The weather had indeed smiled on us once again however, and the mercury climbed to a balmy 50F or so. The small tympanum at the top of the facade actually has three ornamental terra-cotta doodads on it, that are almost impossible to see from ground level: 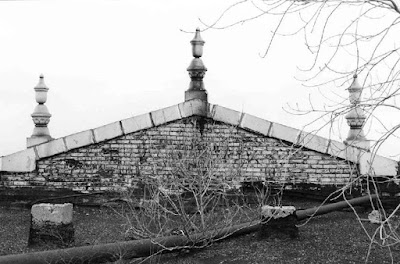 The roof was pleasant and provided a nice unobstructed view of Comerica Park's interior: 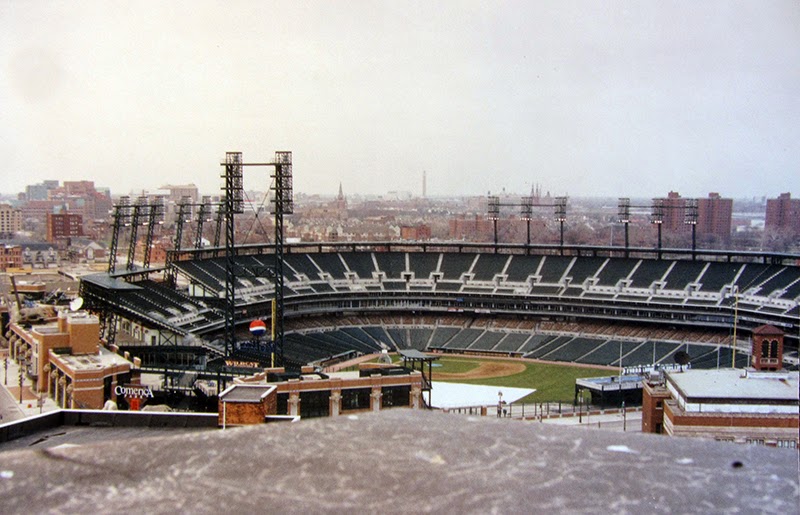 The morons who designed that travesty neglected to put bleachers in the damn thing, for reasons all too obvious to those who remembered the old Tiger Stadium, so I wouldn’t feel at all guilty about taping a game or two without the express written consent of Major League Baseball or the Fox Network. Take that, Illitch. Too bad no one would be hitting any homers far enough to be caught on the Wurlitzer's roof. At least not the 2004 Tigers, anyway.

The roof also featured glass-block skylights, and several fledgling rooftrees that looked strong and promising. I noticed how enticingly close the Metropolitan Building's roof was to the Wurlitzer...if I had some rope...hmmm. Hell, it was almost close enough to jump. Notice in the photo on the left that the new YMCA had not been built yet, and the People Mover was still wearing its OEM paintjob: 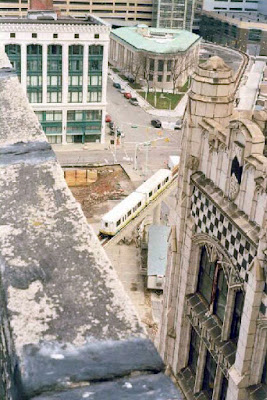 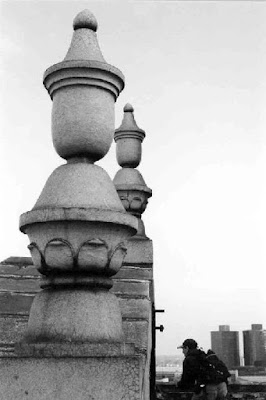 Here, a view of the Milner and Madison-Lenox hotels, as well as the Harmonie Club at far right: 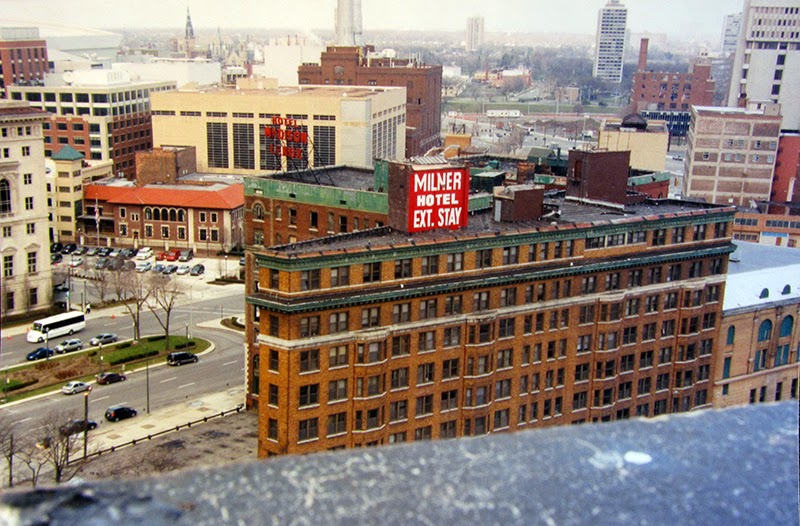 Loooking up Woodward, you can see the Donovan Building still standing beyond the Fox Theater, as well as the Fine Arts Building: 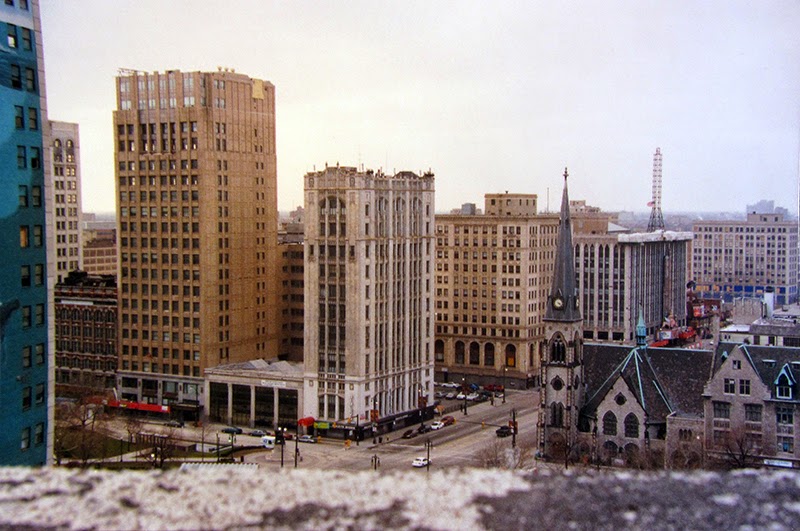 I decided to climb up on the tympanum and get a shot looking straight down the front of the building while hanging over the edge...the results were better-composed than expected: 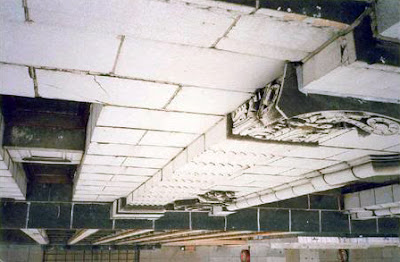 We went back in and braved the pigeon fecal-fest and inevitable fluttering of filthy wings to check out the top floor, which was set up like a musical performance hall with high ceilings and a small stage at one end: 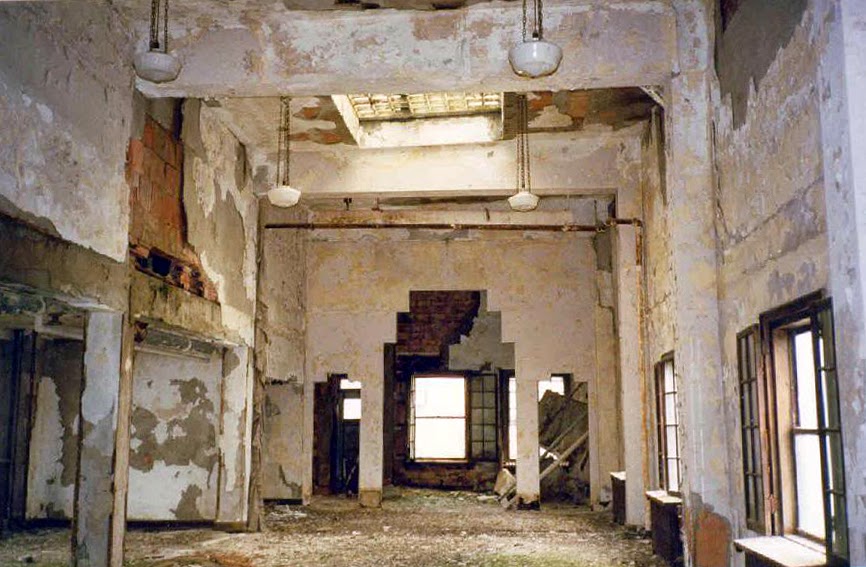 Had a Wurlitzer organ once been installed here? I didn't see any of the telltale signs. The floor was a disgusting mess of damp birdshit, which smooshed underfoot and reeked like hell. It was definitely the most decrepit floor in the building, and subsequent trips in recent years have shown that it rapidly plunged into a steady decline (with of course the addition of lots of graffiti).

I also stuck myself out a window to try and get a better detail shot of the upper facade: 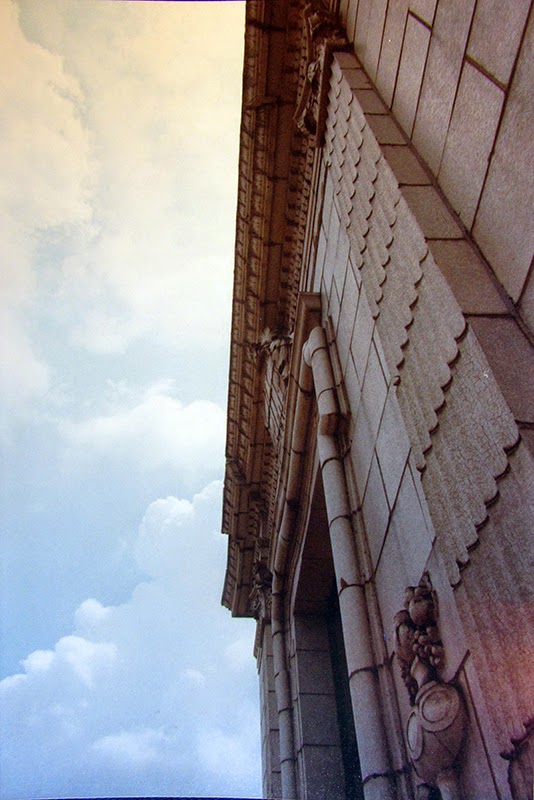 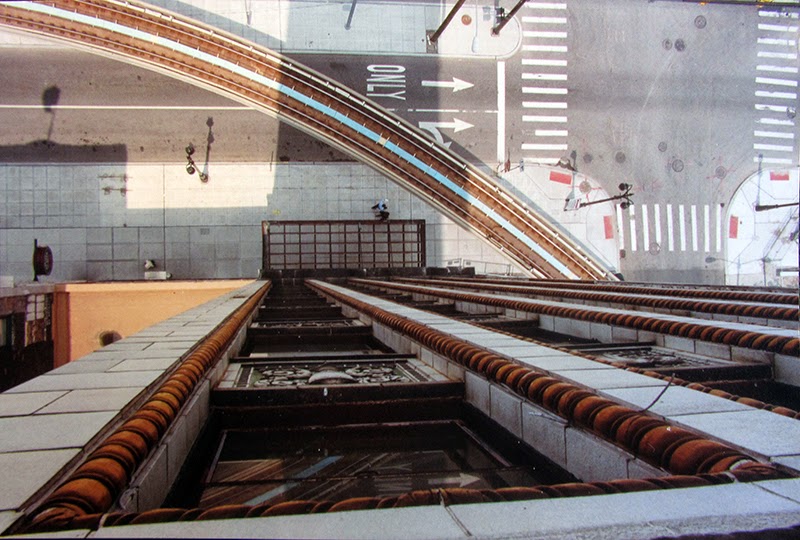 The Wurlitzer's neglectful state became quite the infamous public safety hazard when it began shedding pieces of itself, some of which crashed through the roofs of nearby buildings like meteors.  Recall the collapsing fire escape that I mentioned earlier, held in place by a ratchet-strap tied around a sink pipe...

The owner was finally ordered to remediate that incredible dangling hazard several years later, but the entire rear curtain wall of the building began to come un-sewed not long after the fire escape was removed, cascading bricks into the alley we used to use to gain access to the Broderick Tower and other nearby buildings. A great vantage point to gaze upon the Wurlitzer's decrepitude was the roof of the Metropolitan Building: 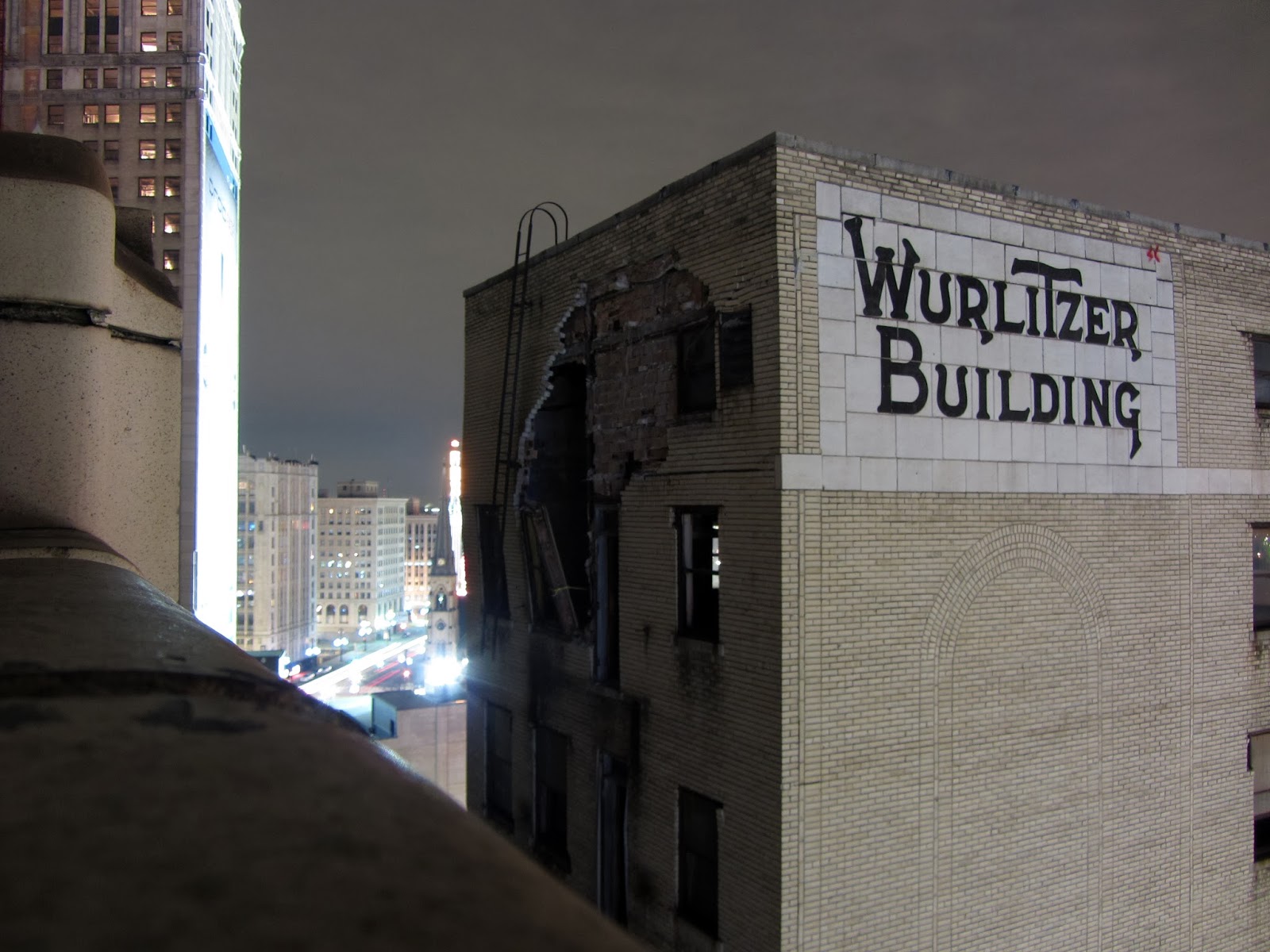 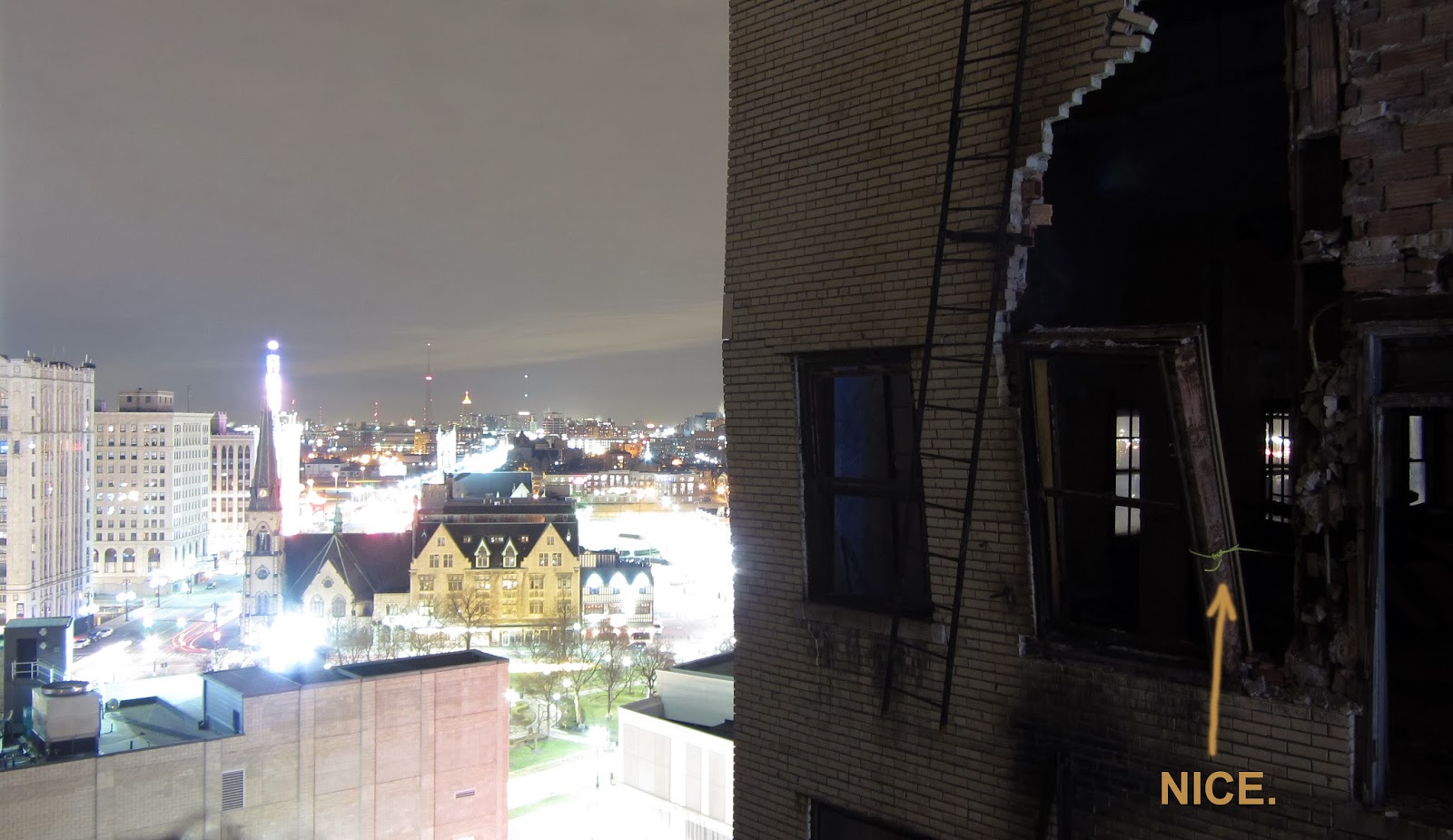 Yes, that is a piece of dollar-store nylon rope holding that window frame in, and preventing it from pulling another half-ton sheet of bricks down into the alley with it. This was not even the first time an entire flank of a skyscraper had disastrously avalanched in recent years; In 2008, the rear elevation of the Odd Fellows Building came off in a windstorm, crushing several parked cars.

As of early 2015, there are positive-sounding indications that a real restoration is in the works for the Wurlitzer, which will allegedly involve turning it into a boutique hotel.