Photos date from December 2005 and later. 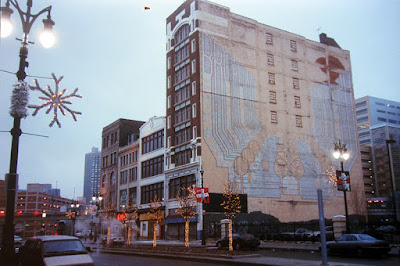 The old Lafer Building on Broadway was the tall, skinny exclamation point at the end of another mostly abandoned sentence of storefronts that began with the Cary Building: 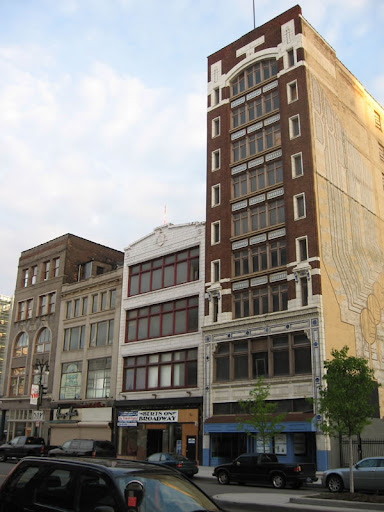 The only non-abandoned building on the block was the one that contains the iconic Henry the Hatter, who has been the hatter of choice for many famous Detroit personalities including Kid Rock, and Kwame Kilpatrick if I'm not mistaken. Bert's On Broadway later opened in the white building between Henry's and the Lafer, which was famous in the city's underground in the 1980s as "The Music Institute," one of the sites crucial to the formation of Detroit Techno music. Pioneers like Eddie Fowlkes, Derrick May, Juan Atkins, and Kevin Saunderson performed here.

The Cary Building, on the end, was about to transform itself into lofts as well. 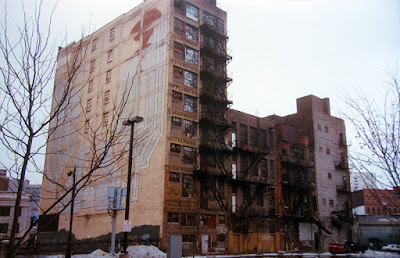 However accessing the Lafer did not guarantee us access to the rooftops of the neighboring buildings as we had hoped, unless we wanted to bash out a window on the 5th or 6th floor...as I recall they were all sealed, possibly to thwart roof-borne burglary attempts at some point in the past. Vertical Watch, yo!

Here is a closeup of the rear of the block, with even more nasty faded 1960s/1970s-era painted signage advertising what kinds of goods or services could be had in the Lafer Building, such as silverware, appliances, luggage, radios, watch repair, "old gold," optometry, etc.: 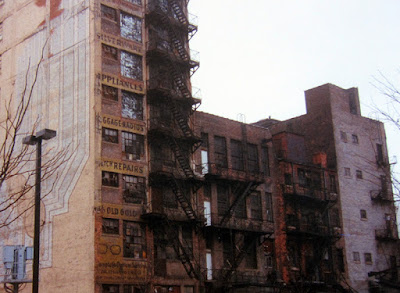 You just don't see those kinds of dingy old fire escapes anymore either, but for decades they were one of the things that defined the urban landscape of our major cities. It seems to me that you don't even see alleys anymore either; everything is now squooshed together into one mega-plex that is spaced well apart from other mega-plexes by a sea of parking lots. Obviously because we have eliminated dirty alleys from our cities, we have also eliminated all their shady activities, and unsightly things such as dumpsters too (that was sarcasm by the way).

The huge old wooden bar remained on the first floor of the Lafer Building when we arrived, but because it was so dark in there I didn't really get any worthy photos. An odd remnant of the mosaic floor tile in the building's entryway still bore the ancestral Lafer name: 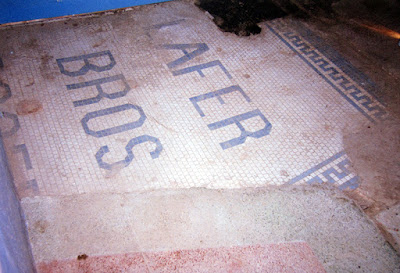 John Lafer started the business that would become Lafer Bros. Grocery Wholesale in 1883 in Cadillac Square. His brother Frank G. Lafer partnered with him a few years later, and in 1907 Frank bought out his brother's interest in the business, eventually moving it here to this 9-story tower at 1323 Broadway, which was built in May 1915, and was designed by architect Joseph E. Mills. 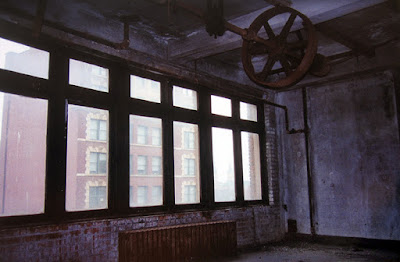 Inside the Lafer Building was pretty empty, with each of the floors having been cleaned out completely at some point, except for a few odds and ends that hearkened back to its days as a grocer's building in the 1910s. This slide seen in the next photo sat near the rear of the building, and was utilized for moving bulk items from the stockrooms on the upper floors to the shipping room on the second floor when grocery orders were assembled for delivery: 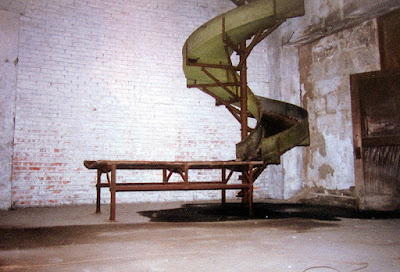 The construction of this building officially made Lafer's not only the biggest grocer in Detroit, but the largest in the state of Michigan as well. The main salesroom was on the 1st floor, while the basement contained a refrigeration plant and cold storage. The 2nd floor was the ordering department and shipping rooms, wholesale department and country shipping stations on the 3rd floor, while the 4th floor housed one of the "most complete coffee roasting and tea blending plants in the country." The rest of the building was for storing stock, but I have a feeling they also had warehouses elsewhere in the city. I know by 1946 at least, their coffee and tea warehouse had moved to 2416 Hubbard, on the city's southwest side.

Here is an ad I found in the Detroit Free Press from September, 1933: 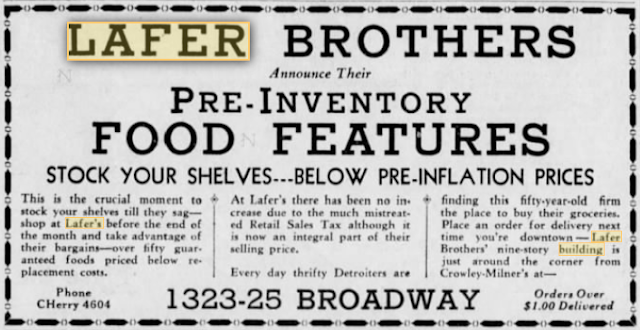 Here's a snippet of another from 1936, but I don't know how many people could really splurge on the *fanciest* marshmallows during the Great Depression, or the tins of "Fancy Nova Scotian Lobster" advertised near the top of the list for 23 cents each: 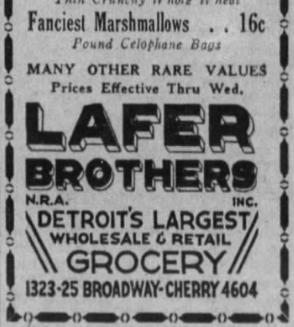 There were plenty of more conservative items as well, like Quaker's Puffed Wheat for 8 cents or a can of Friend's Pork & Beans for 17 cents. If you ordered over a dollar's worth, you could have all of the items sent down that crazy spiral slide when orders were put together for home delivery. I'm sure Sylvester the Cat would appreciate the fact that they also had a pretty good deal going on succotash in March 1933...a "big no. 2 can" could be had for 11 cents. 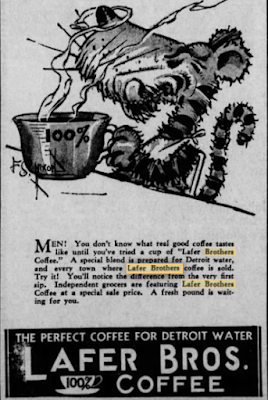 ...I'm not sure whether that adds up to a slight against Detroit's water quality, or a compliment, but judging by the number of old ads I'm seeing in the Detroit Free Press archives, their coffee was one of Lafer's big ticket items.

A help-wanted ad I found in 1945 also seems to indicate that Lafer Bros. owned a dairy and crop farm "15 miles north of Pontiac;" the ad was seeking a farm hand to work and live on the farm. It boasted, "Modern equipment. Room & board furnished. Salary in keeping with experience." 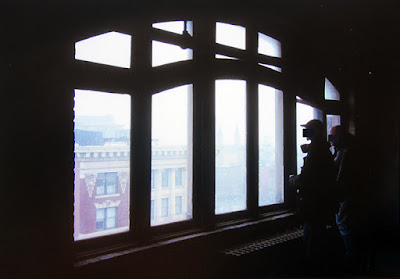 From the big arched window on the 9th floor, one can see the equally iconic Serman's, a men's clothing shop that has remained open under the same owners since 1917: 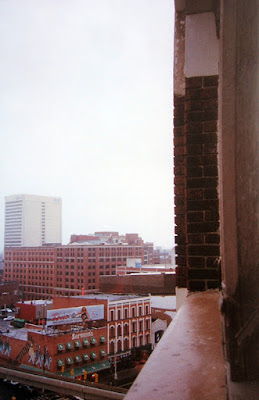 With Henry the Hatter across the street, this corner proved to be quite the location for men looking to look good, even in these days of epidemic downtown vacancy. Some of the famous men that had shopped there included Tommy Hearns of Kronk Boxing fame, Marvin Gaye of Motown fame, and even Flavor Flav. The Free Press reported in 2013 that Serman's would finally be closing in the wake of being bought out by the latest billionaire real estate monopolist, Dan Gilbert.

The view of the Breitmeyer-Tobin Building was very decent from here: 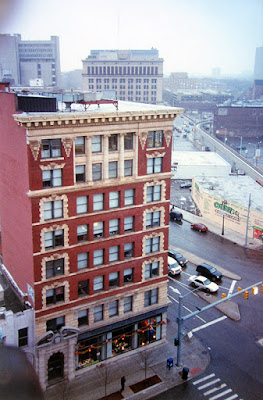 ...as well as that of the Harvard Square Centre Building that we had likewise recently infiltrated: 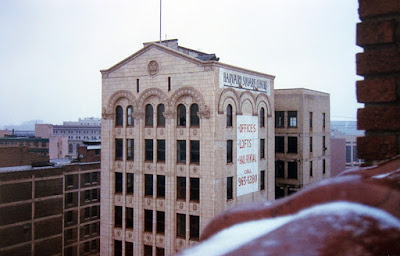 Frank G. Lafer lived at 1163 Second Avenue until October 1915, then at 3061 West Grand Boulevard, where he died in May 1928. His eldest son, Gayard F. Lafer took over the business as general manager, and was also a director of the Equitable Trust Co., as well as the president of the Wholesale Merchants Bureau in 1948. He lived at 18645 Muirland Street, a cute little unique home in the prestigious Palmer Park subdivision. 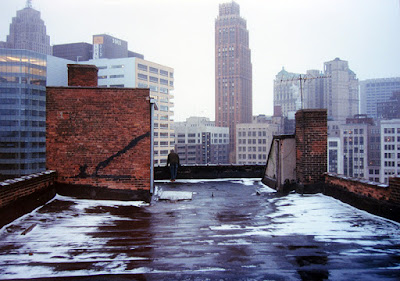 We snuck into Lafer again in early 2006. We didn't know how long the place would stay accessible since renovations were underway, so time was of the essence. Knowing it was our last time, we had a little fun getting some rooftop snowball target practice in as well.

Some rather unique scenery from this rooftop, even in winter when the steam outlet on Farmer Street blots out most of the view: 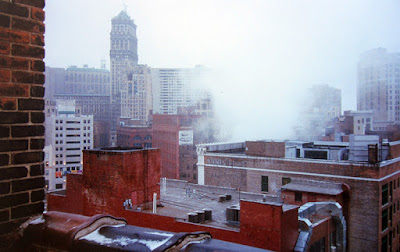 The Lafer name remained on this skyscraper until 1946 when a jeweler and a clothier moved in, according to an old Detroitblog post. I imagine that few people went downtown to get their weekly groceries in the Postwar period, since neighborhood corner grocers had long since supplanted the 19th century practice of traveling to the "general store."

It would seem from old newspaper articles and ads that Lafer's had re-centered itself in Southwest Detroit at 2450 Hubbard (which is now the home of Boulevard & Trumbull Towing). Perhaps of little coincidence, that address stands directly across from the headquarters of the C.F. Smith Co., another very prominent Detroit grocer whose building I explored in an older post. 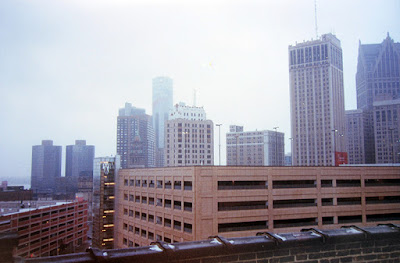 A legal notice I found said that "Lafer Bros. Inc." was dissolved in the summer of 1967, although it doesn't give the reasons why. The company president at the time was James A. Slater, and its secretary was Irwin K. Champan.

In 1957 a bar named Bar-x moved in on the first floor, and remained there until the building closed in 1983. Another bar named Club Reminisce opened for a short while in 1996, but went dark again by 1997. 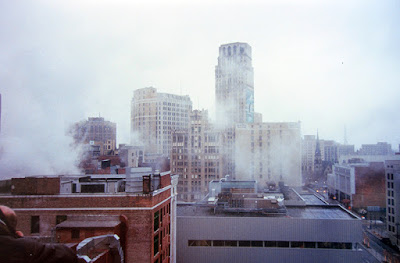 An April 1998 article talks about how the Downtown Development Authority and the Greater Downtown Partnership worked to create a loft craze in the Necklace District of downtown Detroit by the early 2000s. The Ferguson Building was the first one slated to be renovated, and the Lafer was to be the second. That scheme apparently did not go beyond the stage of making pretty proposal display boards however, which we found laying on the 1st-floor bar covered in dust: 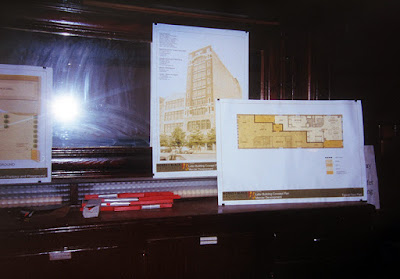 That attempt also marked the first time that the DDA was marketing city-owned/defaulted vacant properties for the purpose of lofts. The sticker price for the Lafer at the time was set at $465,000. The Ferguson and the Lafer were supposed to be the bellwethers of the downtown loft movement—or canaries in the coal mine, perhaps. Based on the success of these two projects, other developers would supposedly see how quickly they filled up, and in turn buy buildings of their own to renovate.

The Ferguson Building was successfully converted, and I had a friend who lived there for several years, but as it turns out the Lafer would not see any renovation action until seven years later, in 2006. I have a feeling that the Lafer Building's current market value is much more than $465,000 however.

And here is the gigantic hole where the J.L. Hudons's store used to be.... 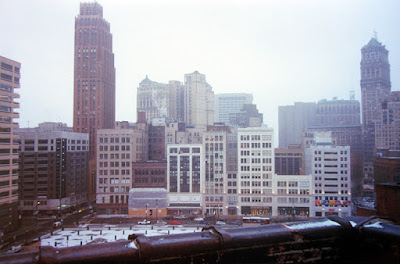 Today the Lafer Building has been converted into lofts, and as far as I know is healthy. The faded, yet dramatic "BROADWAY-RANDOLPH" 1970s mural on the north face of the building (where the old Strand Theater used to stand) was painted over in poopy brown in 2006 or so when the current renovation attempt was begun. I wish they hadn't done that; it was one of those things that gave downtown its flavor.

One more shot of that mural... 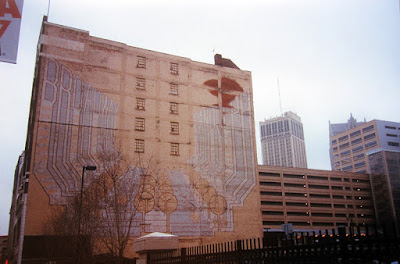 Most of you now know it is nothing more than a completely uninteresting blank brown-painted wall. Stay tuned for some really tacky banner ads about smart phones or shoes!

Here is an old shot of the Lafer I found in the DUCP, c.1976, when it was looking especially crusty: 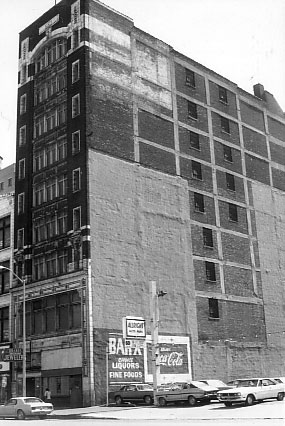 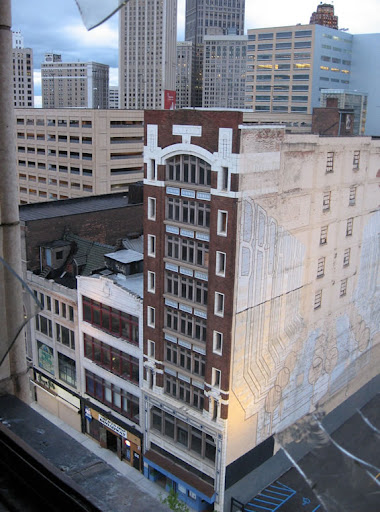 Anyway we later cracked our way into the Cary Building and made our way across the rest of the roofs we had not yet been on, but this adventure proved to be fruitless, as none of the buildings gave access unless we were to crowbar our way in. 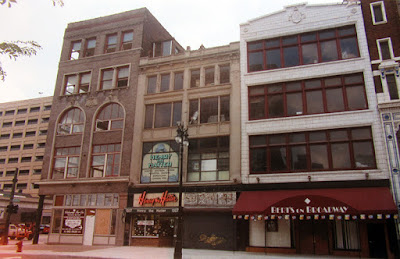 I also did not have my camera with me that night, or maybe I just I ran out of film. C'est l'vie. 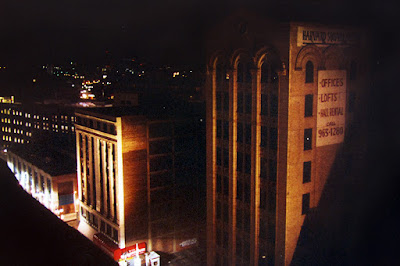