NOTE: photos of Harris Milling were taken by the author's cousin; nonetheless they remain the copyrighted property of nailhed.com. Most are scanned from 35mm prints.

Going through old shoeboxes can be rewarding. My cousin gave me these old photos he shot on 35mm back when we lived in Mount Pleasant. The date of processing listed on the backs of the prints is December 30, 2002, so I imagine that they were taken around that time. Remember developing film? Anyway, since I never had any photos from this place, and since I'm sure my cousin won't mind my reproducing his images, here we go. 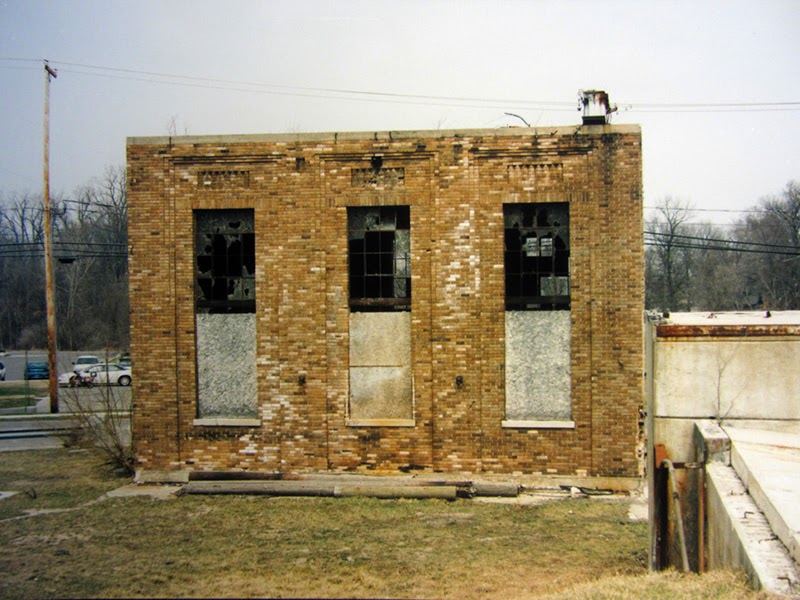 On the south side of West Broadway, next to the railroad tracks sat the Harris Milling Co., which was demolished a long time ago, so not many current Mount Pleasant residents may even remember it; in fact there wasn't a whole lot left when my cousin took these photos. 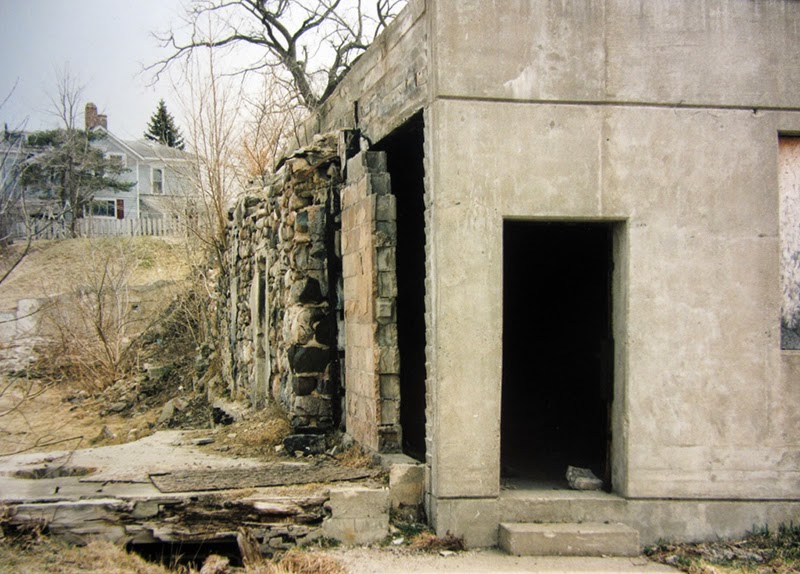 The presence of cobblestone walls seems to indicate that Harris Milling got its start in the nineteenth century: 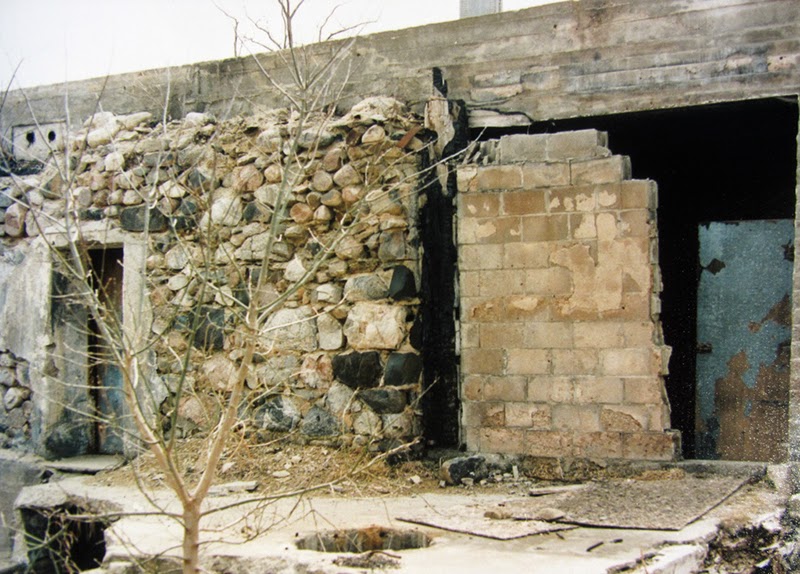 Look at this old clap-sided Italianate-style thing, what a relic: 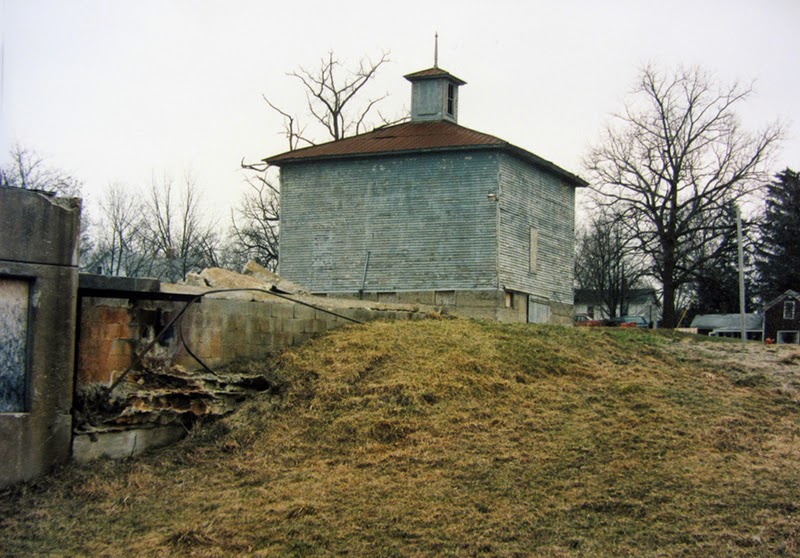 According to an article in the Owosso Argus-Press, Harris Milling was founded here on the banks of the Chippewa River by John A. Harris upon his return home from the Civil War, with his brothers William and Henry. 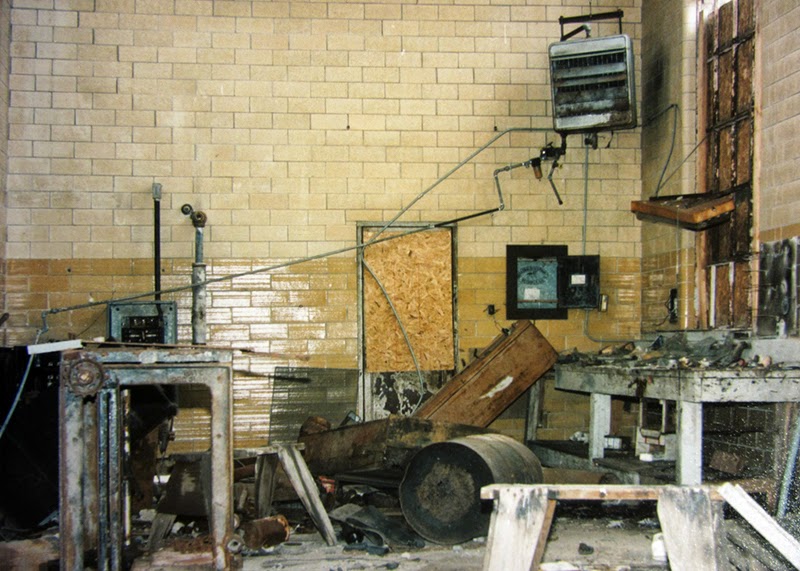 Reports of the Michigan Board of Agriculture from 1918 to 1920 state that Harris Milling dealt in buckwheat bran and ground barley at that time. The Mount Pleasant Classified Business Directory, 1925-1926 shows that Harris Milling advertised its services in flour, feeds, seeds, and grain. 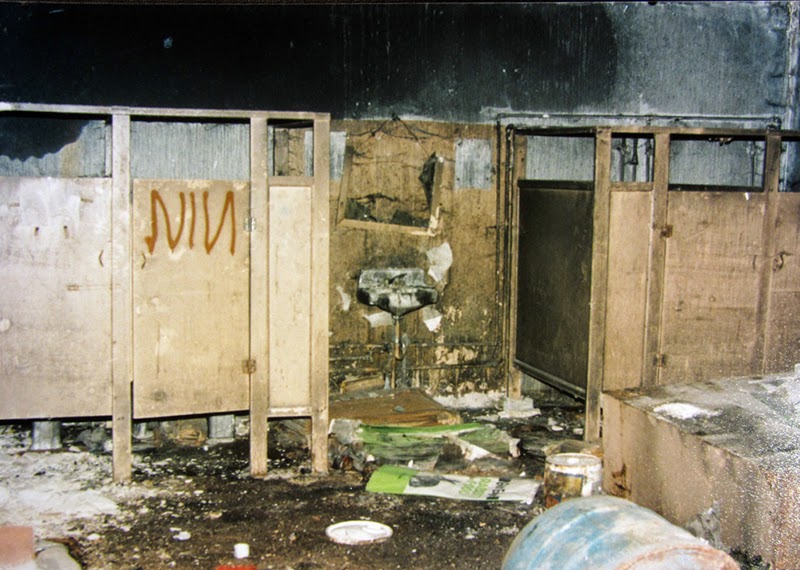 The Owosso Argus-Press article said that in 1950, the family opened another mill in Owosso, which worked solely in soft white wheat flour, which allowed them to branch into the cracker and cookie flour business. 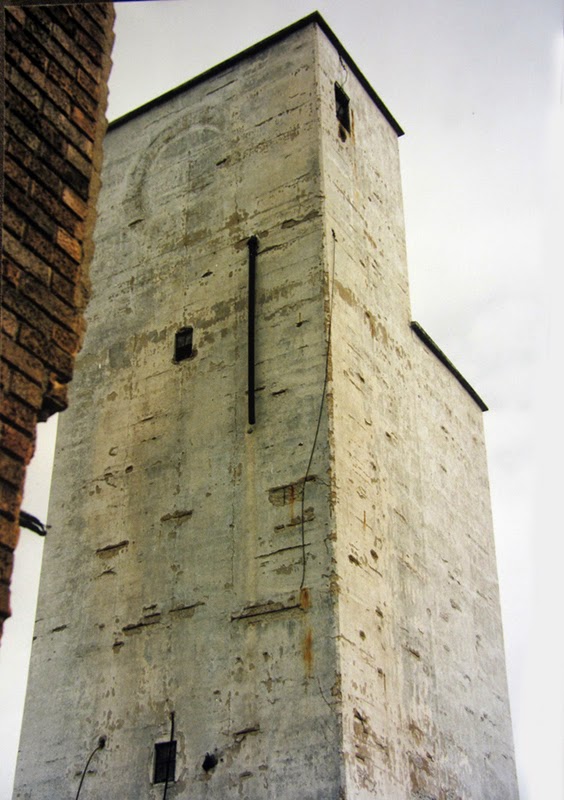 At the time the article was written in 1966, Harris Milling was being taken over by Nebraska Consolidated Mills Co., and the business had been in the family for almost a century by that point. This Mount Pleasant mill was still in operation back then, primarily making buckwheat flour in its newer section, and livestock feed in its original section. 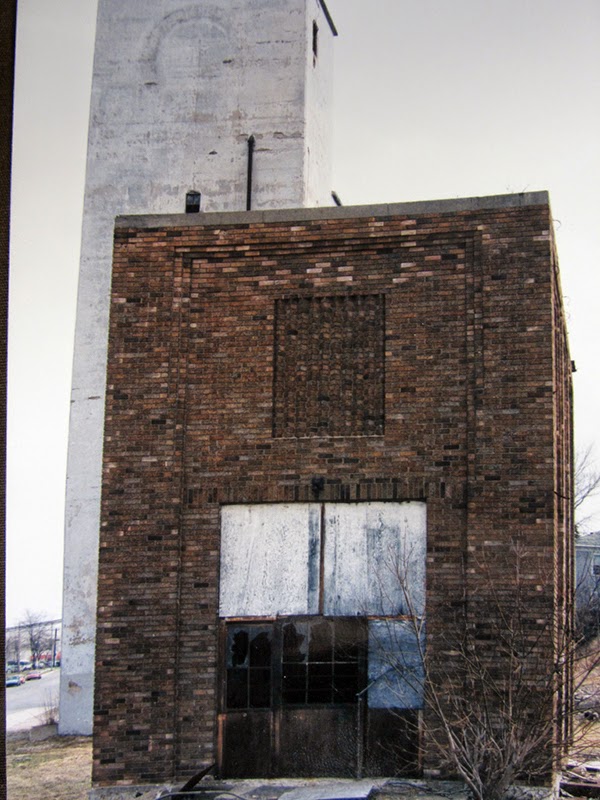 Harris also had a flour mill in Durham, North Carolina, under the name Austin-Heaton Co. According to the article, Harris Milling had an annual sales of $6.7 million, in "flour, grocery products, and animal feeds." All of the Harris Milling structures pictured above were demolished in the early 2000s. 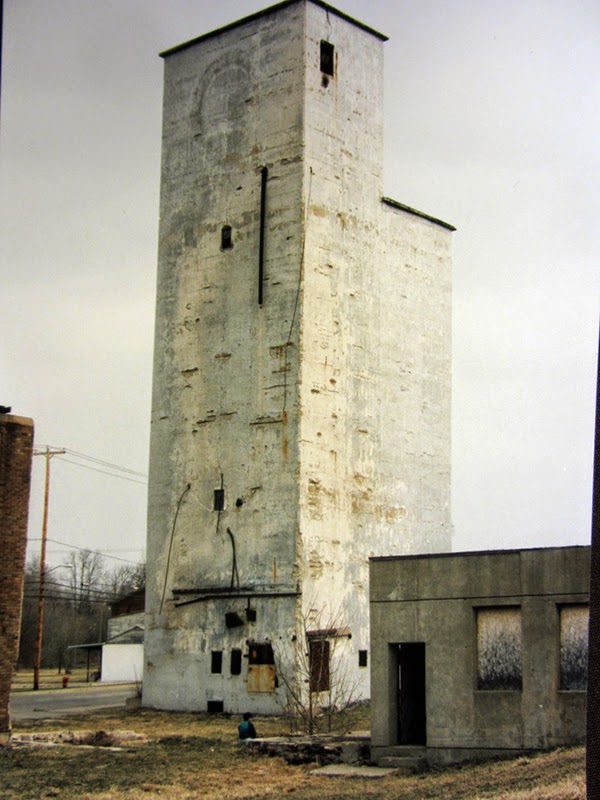 NOTE: All of the following photos were taken by the author.

I always kept an eye on the Borden Creamery, also known as the Michigan Condensed Milk Factory, which, like Harris Milling, stood notoriously abandoned while I lived in "Mt. P": 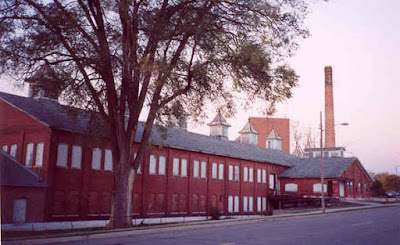 It always remained well-secured and well-watched, so I never got inside. There was one day where I saw a potential way in, but I was a little too nervous to try it.

Perhaps surprisingly, it was listed in the National Historic Register. I am fairly sure I once read that it was one of two creameries ever built in this particular style, and if I'm not mistaken the other one (in California) was demolished. Samuel Whaley Hopkins, a lawyer and a local statesman started up this concern in 1906. 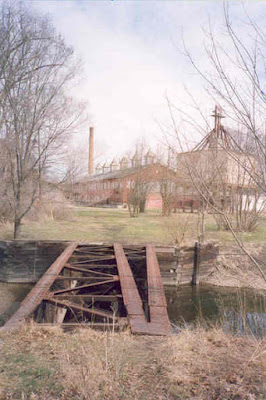 According to the book Michigan's Heartland, 1900-1918 by Forrest Meek, it opened in July 1908, and handled 50,000lbs of milk daily, from which they produced 13,000lbs of evaporated milk and 11,000lbs of condensed milk. The plant had 38 employees and 14 men driving the collecting wagons to and from all the farms.

The opening of this condensery allowed Isabella County farmers within a ten-mile radius to much more easily clear profits from their dairy herds. Before Gail Borden came up with the idea of milk condensing in 1852, everything was done on the farm itself, and the final product was never consumed more than a couple miles from where it was produced. 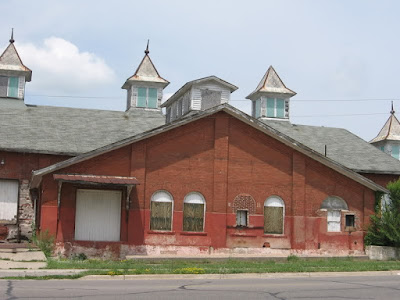 The benefit that the invention of condensed and evaporated milks offered was that for the first time, milk had a real shelf life. It also posed less of a health risk than milk straight from the udder. The proliferation of another Michigan invention around this time--the electric refrigerator--improved this even further, and milk could now be shipped longer distances to be sold. During World War I, canned milk was sent overseas to improve the ration diets of soldiers on the front.

Another article says that this plant was "one of the few milk factories that produced both condensed milk and butter," and that "in its glory days," it processed more than 200,000 pounds of milk per year, coming in from 500 local farms. 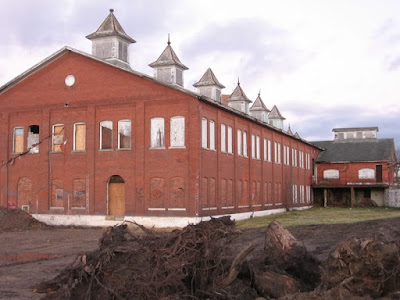 An online .pdf source presents a timeline showing that the condensery operated until 1959, and by 1960 it was vacated. It was purchased by Burton Bader in 1965, who used it for storage and sales of farm seed and fertilizer. It was leased to Sweeney Seed in the early 1980s, and sometime after that it closed and began trading hands to and from parties interested in reusing it for speculative ventures that never materialized.

According to the Michigan State Historic Preservation Office (MSHPO), the condensery stood vacant for 40 years. It took until the mid-2000s for anything to happen, and today it houses the offices of Mount Pleasant City government. 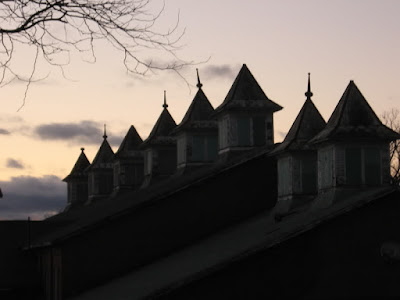 Sadly, the fancy Borden smokestack was torn down when the city remodeled the old condensery as the new Mount Pleasant City Hall: 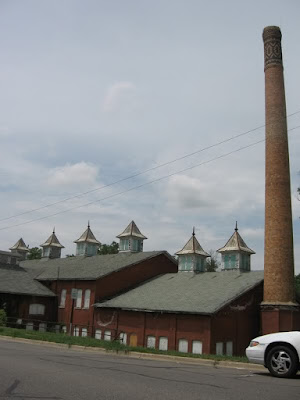 Another odd little thing I came across while wandering the former Ann Arbor Railroad tracks next to the shack I lived in up there was this archaic implement: 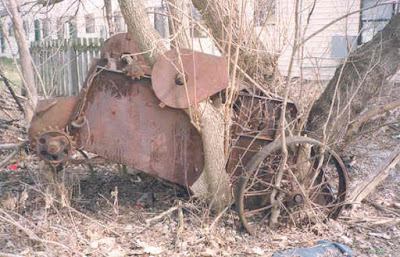 My guess is that it's a baler. If I'm not mistaken it sat next to an old railroad freight shed, which I believe is visible in the background.

Here is my first attempt at a "before & after" photo, at the Mount Pleasant City Water Works, across Broadway Street from Harris Milling: