A friend once recommended to me a soul food restaurant on Michigan Avenue in Ypsilanti, called "Soul on a Roll," but when I looked for it, it seemed to have gone out of business or moved. I did however notice that there was a nice big juicy abandoned plant to check out, so I made a mental note to come back once it had krauesened a little more.

I also wanted to avail myself of whatever inroads could be made against the Ford Ypsilanti Plant, which I had lately noticed was being gnawed at by the inexorable building-eaters, another sad reminder of the complete fold-up of Michigan’s industrial past, and America’s economic worth:

According to ypsilantihistoricalsociety.org, this plant was built in 1932 and continually expanded up until 1983 until it was over 987,000 square-feet. It made electrical parts for Ford cars such as generators and starters, and during WWII produced similar items for Pratt-Whitney airplanes, tanks, and military trucks. By 1982 The Ford Ypsilanti Plant employed a total of 1,800 people, and was producing "starters, ignition coils, distributors, horns, struts, air conditioner clutches, and bumper shock devices." It later became a Visteon plant before closing, and its death was eulogized by both Charlie LeDuff and Mark Maynard.

On a side note there's another Ford plant on the south side of the lake, the Ford Rawsonville Plant, named after the village of Rawsonville, a ghost town that existed before the factories came, but is now barely a memory. Started in 1823, Rawsonville went into decline and totally disappeared in 1925 when “a dam erected on the Huron River covered most of the remaining structures with the newly-formed Belleville Lake,” according to a nearby historical marker.

Anyway, since I couldn't get in the Ford plant, I reared my ugly head in the direction of Plan B. Namely a collection of mediocre buildings that sat just north of the Ford complex, but for a short jaunt through the woods over a former railroad bed which hugged the curving nape of the Huron River’s neck as it wended its way past downtown Ypsi:

Just before passing onto the property, I had to go through an abandoned former city park, complete with baseball diamond and forlorn swingsets:

The signage I saw on some of the buildings here seemed to indicate that the place was the Ypsilanti Iron & Metal Co., but with this really large factory style building, I had a hunch that wasn't the whole story, so I consulted the Sanborn maps.

The 1888 and 1893 Sanborn maps for Ypsilanti show that this general area was marked "Original Town," and was sparsely occupied by small concerns such as the Deubel Bros.' Huron Flour Mills, the McCollough Bros. Foundry & Machine, the Webster Bros. & Sons Planing Mill, as well as what looks to be a sprinkling of houses.

This elongated, one-story concrete factory structure first appears on the 1927 Sanborn, but it was marked as being currently vacant, "formerly" occupied the Commerce Motor Truck Co.:

Coachbuilt.com says that the Commerce Motor Car Co. existed from 1911 to 1923 in Detroit, then relocated to Ypsilanti in 1923, before finally being bought up in 1927 by the Relay Motors Corp. (which explains why the Sanborn map from that year shows this plant as vacant). They manufactured the old style chain-drive panel delivery trucks like you see in old-timey photos. Commerce Motors eventually expanded and updated their designs as automotive technology advanced, and in 1922 they started using Continental engines to power their trucks. "Claimed to be 'the wonder of motordom' the 1922 Commerce cost $2,350 and could travel at 40 mph easily."

By the time production shifted to this plant in Ypsilanti, Commerce Motors was also manufacturing four different bus chassis (from 18 to 28 passengers), as well a model of lumber truck, a dump truck, an oil truck, and a "funeral car," according to Coachbuilt. My guess is that they were a low volume manufacturer, relying on the old station-assembly method as opposed to a moving assembly line.

Other changes to this area on the 1927 Sanborn map showed that the old McCollough Bros. Foundry & Machine had become the W.M. Frisbie Machine Shop, and the Huron Grey Iron Foundry. None of those structures still existed during my visit however.

Obviously this structure has been added-onto several times since it was built for Commerce Motors in 1923.

I was surprised by how much graffiti was in here, and the fact that many of the pieces were done by names usually seen in the Detroit area. But then again I guess proximity to Eastern Michigan University might have something to do with that.

I also must say that this next one’s gotta be the creepiest piece I’ve ever seen:

Sheet 21 of the 1927-1950 Sanborn shows that this complex remained in use as an automotive plant, owned by the Motor State Products Co., a division of the Detroit Harvester Co. The Amesbury Seat Mfg. Co. was located in a building immediately to its southwest.

Motor State Products manufactured automobile convertible tops here at 108 S. River Street according to what was written on the map. A Detroit Historical Society document lists the Detroit Harvester Co. at 5440-5450 W. Jefferson Avenue, Detroit (which still stands today and is the home of the Flor-Dri Supply Company).

I guess I'm glad I waited a little longer to check this place out, as it had krauesened rather nicely…lots of color to look at by this point. It sure was a great place to do graffiti, anyway. Just a huge canvas for the bombing, and plenty of space to wander around.

Venturing back outside, I began to nibble at the smorgasbord of various outbuildings scattered about this surprisingly rather large chunk of abandoned property. In fact this was like a whole abandoned neighborhood, with derelict streets and all…a huge chunk of Ypsilanti cordoned off and left to go to seed.

This is the corner of South River & Parsons (note street sign)...the arch-roofed building was originally an automobile sales & service showroom according to the 1927-1950 Sanborn map:

Polk's Ann Arbor, Ypsilanti and Washtenaw County Directory for 1920 lists the Ypsilanti Iron & Metal Co.—dealers in rags and waste paper, "and all kinds of metals"—with address of 308-310 E. Michigan Ave., and Isadore Hertzburg as "proprietor."

The theme of the day seemed to be creaking doors, swinging in the breeze. There was at least one loud, swinging door on every single building here, and some of them were all-metal, making the din all the more pronounced.

As it so happens, the buildings fronting along Michigan Ave. contained a cleaner’s, a Dish Network store, and a furniture store. According to YpsiGleanings, this area was in the "Dutch Town" neighborhood of Ypsilanti (at least circa the 1930s-'40s), and Ypsilanti Iron & Metal used to be called Herzberg’s Processing back then. Which seems plausible, given that the Polk's Directory mentioned someone by that name as owning it.

Inside one of the smaller buildings I found the company safe:

A fire occurring on May 13, 2009 called for several fire departments to respond to 103 S. Water Street   (yet another address for the site) because the water mains to these blocks had been shut in expectation of demolition, meaning that no hydrants would work. The fire was small, and believed started by a squatter.

A story in the Ann Arbor News printed mere days after my visit proclaimed that a long-awaited cleanup of this site was set to kick off, announcing that the city of Ypsilanti received $600,000 in EPA Brownfield grants on May 7th, 2009 (curiously enough just before the aforementioned fire broke out).

A decent view of downtown Ypsi to be had from here…

Actual demolition began on May 3rd, 2010, preceded by a "kickoff party" where some very frail politicians got to take the ceremonial first whacks at a cinder block wall by pretending to know how to use a sledge hammer, a moment that was hilariously immortalized in a video clip on this news story in the Ypsilanti Citizen (luckily some less feeble men were allowed to follow up with much manlier swings afterward, saving the town of Ypsilanti some embarassment).

After deciding it was time to head home, I picked off a few shots of one last thing of interest, back by where I had parked my T-bird by the Ford plant mentioned at the top of this post. Some fishermen had taken up station by the bridges over the river, and I spotted the cobblestone ruins of what looked to be an old dam or something to an old mill that may have been on the river at this site before the Ford plant:

That area on the opposite side of the river is called Waterworks Park today, so I wonder if these ruins were part of something like that; the 1916 Sanborn seems to indicate that the "Ypsilanti Water Works and Electric Light Plant" was located almost where I was standing when I took these shots.

Sheet 27 of the 1927-1950 Sanborn shows the opposite bank to be occupied by the city water works. Perhaps then these cobblestone ruins date to a mid-1930s WPA project rather than a mid-1800s industrial concern.

On my way out of town I decided to stop by “Depot Town,” in the middle of which is the old Michigan Central RR Depot, still standing mothballed: 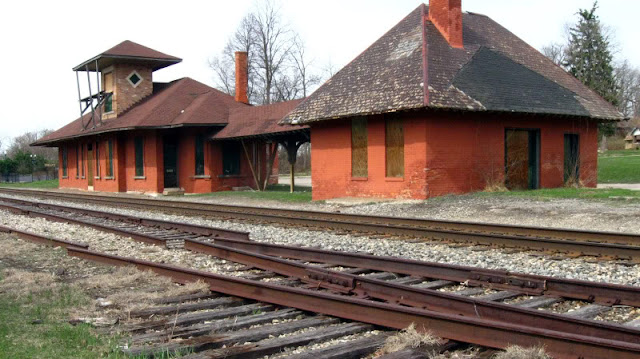 And across the street are the still stabilized ruins of the c.1861 Thompson Block, which had recently burned: 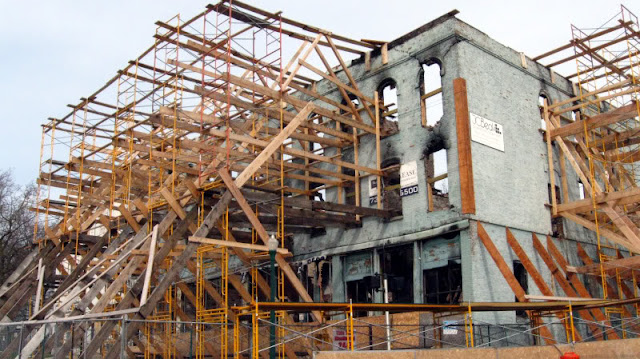 The last time I had been in Ypsi I meant to take a gander at this old building because it looked like access could be had in the rear. I will always kick myself for passing up on that opportunity because the thing burned soon after. It had once served as an Army barracks during the Civil War, and had housed the 14th Michigan Infantry. 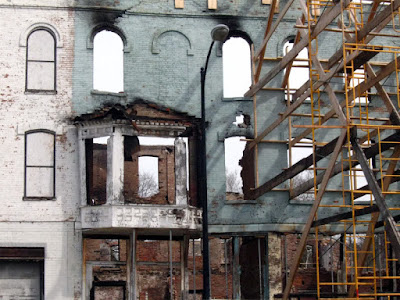 Ypsilanti’s efforts at preservation of its historical character are generally a standout among the other bulldozer-happy Michigan cities. If you want to know what downtown Detroit looked like in the late 1800s, visit Ypsi. 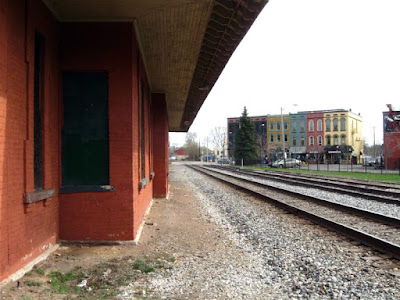