On top of a hill in the West Douglas neighborhood on Kalamazoo's northwest side, sat the Southwestern Michigan Sanatorium, which became quite the local hangout. An old, beat-up brick paved street winds steeply up the side of the hill (aerial shot). 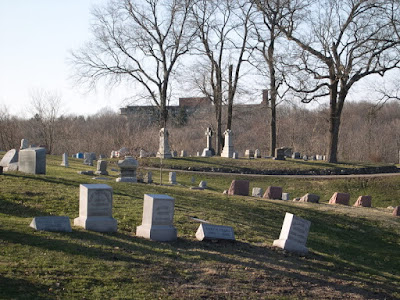 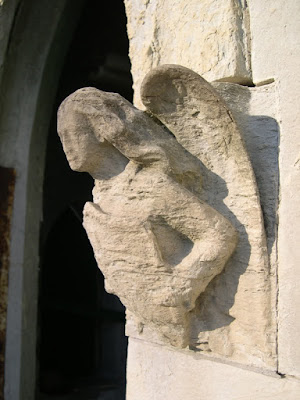 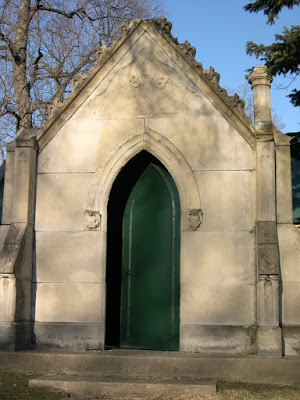 Atop another nearby hill was the huge Mountain Home Cemetery, and the imposing old "Munster House" across the street from it. More importantly, from the front windows of my cousin's apartment one could barely see the sanatorium through the trees up on the hill. I partied at the Vac Shack on numerous occasions, and that naturally led to a few trips into the sanatorium. 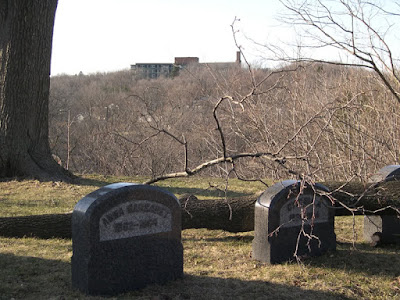 Despite being a bland modern building, there is just something about buildings that are perched on the tops of hills that just makes them look cooler. Sanatoriums were often placed on hilltops because it was believed that this would provide fresher air to the ailing lungs of their patients. 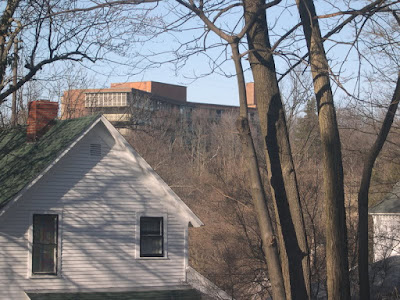 One thing I did not know about while I was hanging out in K-zoo was that the old Fairmount Hospital had once sat just down the street from this sanatorium, and was demolished around the time it closed. Its old circle drive at 1100 North Prairie Street could still be seen up until recently. 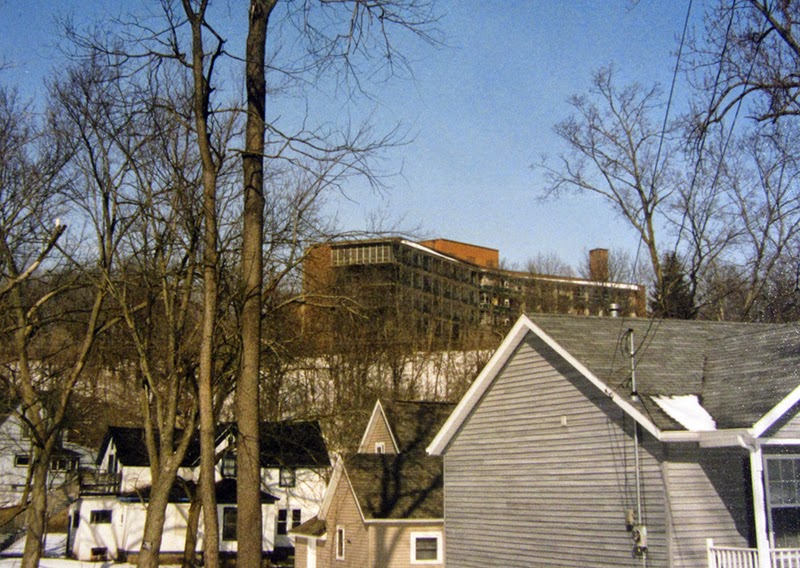 Often times the opening in the fence would change as the holes that were cut in it got repaired, so a walk around the base of the hill was usually necessary to find a way in. Again, being such a modern structure it certainly was not the most interesting place to want to explore, but it certainly had a nice view from the top and therefore made a decent hangout. According to the book Kalamazoo Lost & Found, this is actually the highest point in the city. 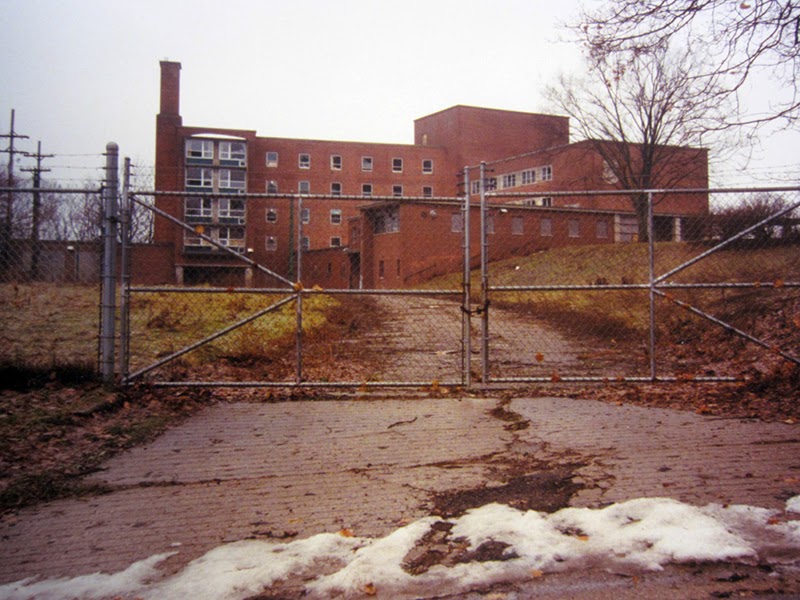 One day I was pleased to crawl through a slice in the fence in a very overgrown area of the hill to accidentally come across this old forgotten cobblestone staircase--undoubtedly once a way up to the old sanatorium but reclaimed by nature after the grounds were fenced off. I'm not sure that too many other people noticed it, especially when it was covered in snow or hidden by leaves: 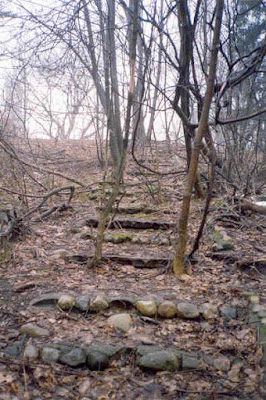 According to an online article by the Kalamazoo Public Library, the 200-bed Southwestern Michigan Sanatorium was opened in 1954, and cost the taxpayers of Michigan $2.5 million dollars. As you'll recall, tuberculosis was cured not long after that, but the era of state custodial institutions in America was at its zenith. Here is a historic photo of it around that time. 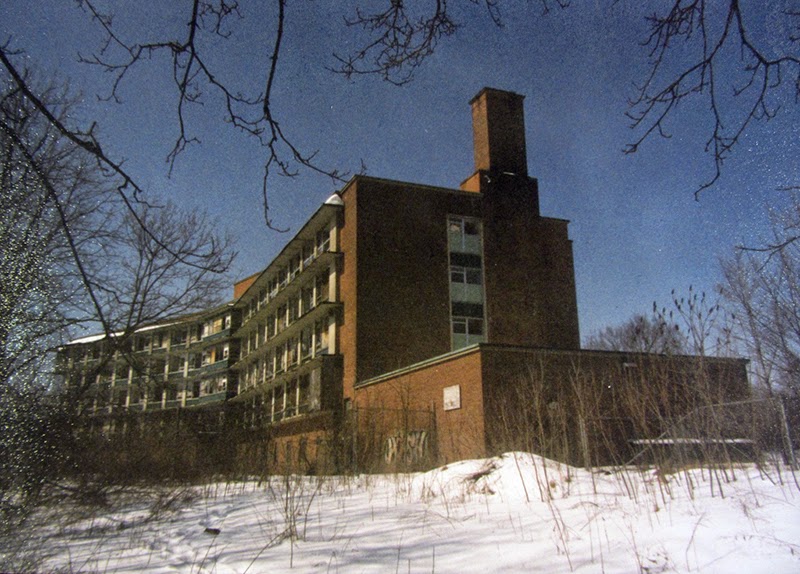 In December of 1965 Michigan decided that the few inmates of its psychiatric hospitals who still had tuberculosis could all be consolidated in this sanatorium, which was renamed the "Kalamazoo Northwest TB Unit" (because it was in the northwest part of the city). I bet that would've sucked if you were a Copper Harbor resident committed to Newberry State Hospital with TB. Anyway, Kalamazoo State Hospital transferred some of its tubercular residents here, which allowed them to eliminate some of their waiting list for new admissions. 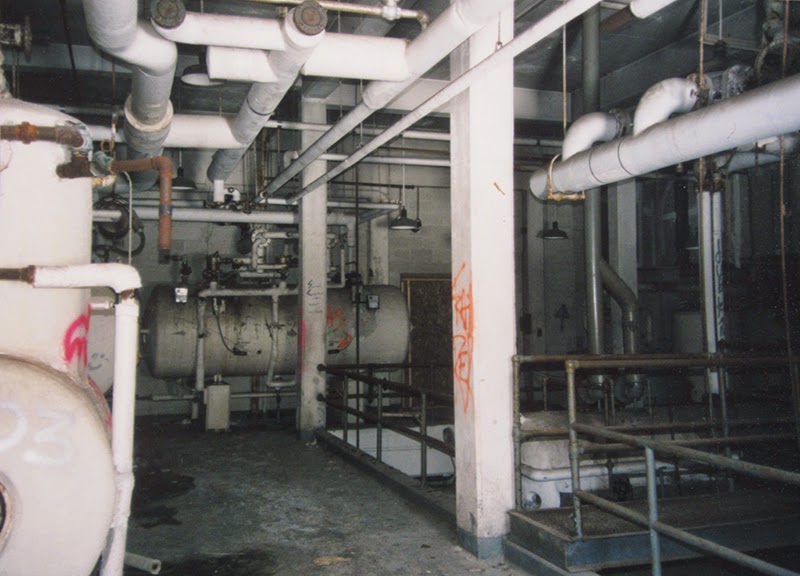 By 1966 however there were only 40 tuberculosis patients housed here, 29 of whom were transferred from psychiatric hospitals. There were however 108 non-tubercular patients housed here who had been transferred from Kalamazoo State Hospital who were elderly and had been held there at the asylum for many years despite no longer needing treatment, but could not be returned to the community due to either a lack of family members or resources to care for them. 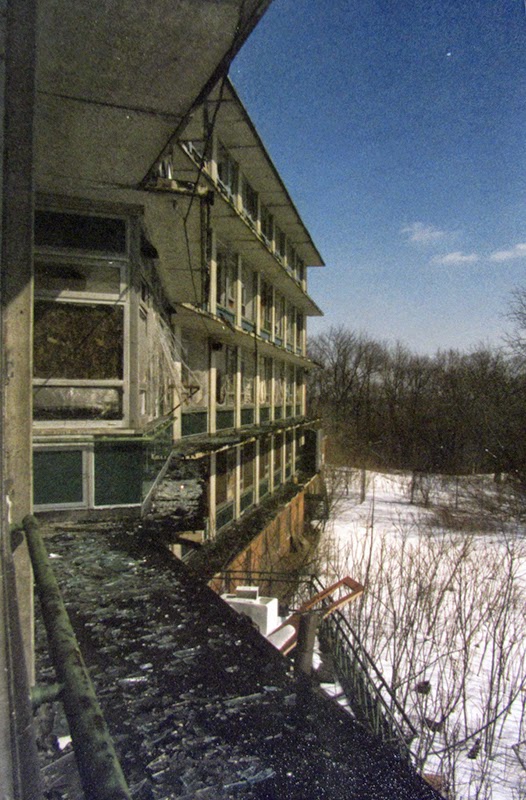 In 1969, because TB treatments had advanced to the point where in-patient care was obsolete, Michigan terminated this center's sanatorium program, and turned it over to the Department of Mental Health, who began converting it for auxiliary housing of inmates from the Kalamazoo State Hospital (soon renamed the Kalamazoo Regional Psychiatric Hospital, or KRPH). As an extension of KRPH, it housed 100 senile and/or partially bed-ridden patients, as well as another 100 ambulatory geriatric patients.

This was one of the hallway nurse stations, with contemporary bars added to keep them safe from the nutty old fogeys: 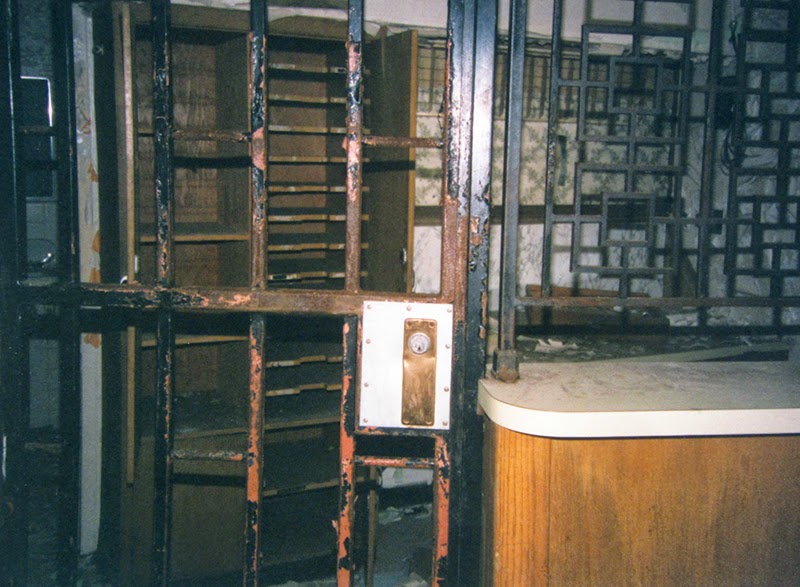 I could have sworn I had photos of the few seclusion rooms, where the steel beds were bolted securely to the floors. There was also a piano that had become lodged in a window because it had gotten stuck while some goons were trying to hurl it from the third floor. There was a pretty decent amount of vandalism present during my first visit in March 2005, and my last visit in 2007 or so.


By 1990 KRPH was down to just 367 patients in the main hospital, and a mere 26 here at the old sanatorium, so the state decided to close it. Since the building was still in good shape however, hopes were high that it would find a new use if placed on the market. 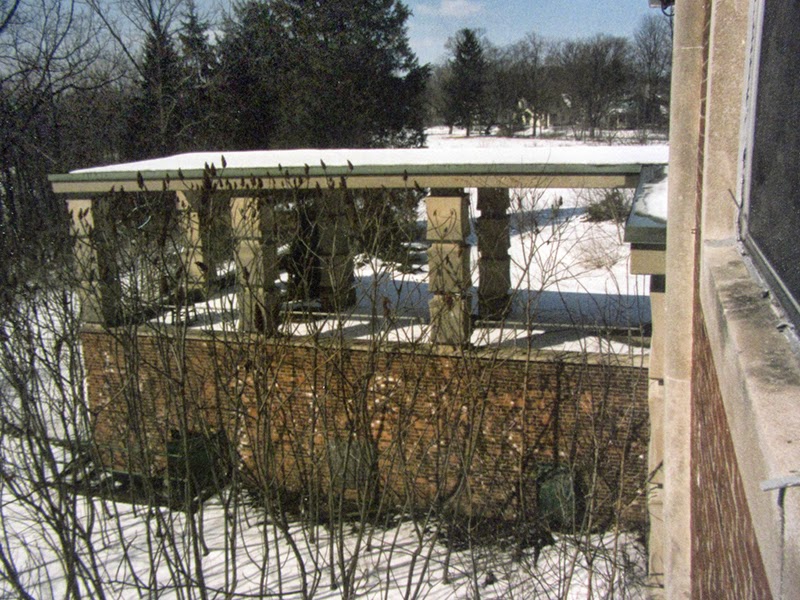 Later that year the private non-profit, Kalamazoo Probation Enhancement Program (K-PEP) expressed interest in relocating their program to this facility, but the surrounding West Douglas neighborhood voiced opposition. K-PEP was a "jail alternative" for non-violent criminal offenders between the 17 and 25, but neighborhood leaders still felt that its presence would hurt their already struggling community's image.

During my second visit I noticed evidences that a squatter had taken up residence in one of the former patient rooms. He had a fairly respectable comic book and heavy metal CD collection, which seemed to imply that he had once been a member of the middle class, but either ran away from home or had fallen upon hard times. 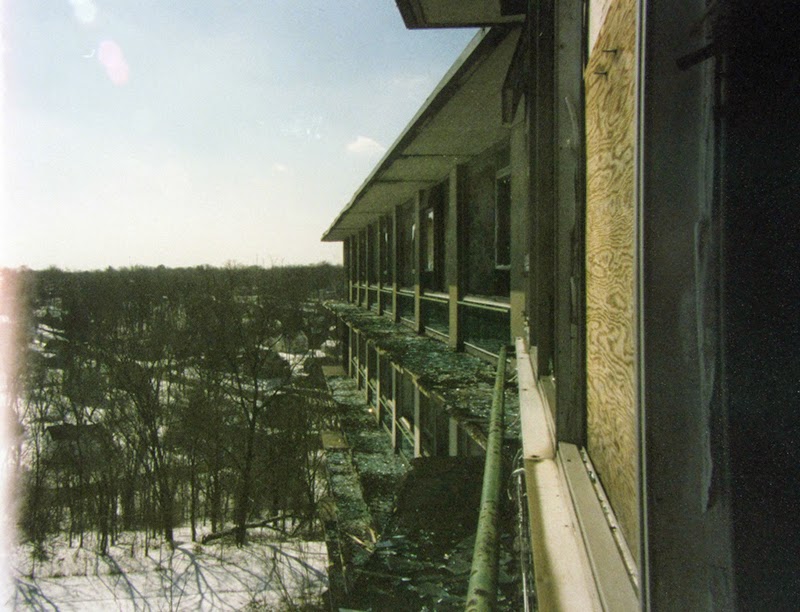 A more palatable offer on the property came from Western Michigan University in 1998, who hoped to expand their library storage, research offices, and Center for Developmentally Disabled adults into the building. They purchased the hospital, but did nothing with it until 2010 when the city applied for federal grant money to have it demolished as blight. I wish I could get away with being that negligent and having the taxpayers bail me out. 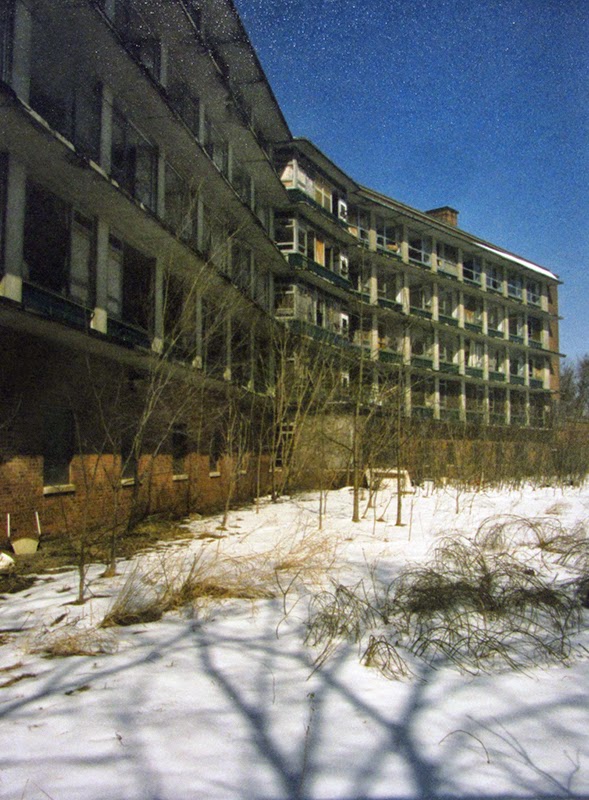 GASP! A torture chair! Clearly this place is haunted by the ghosts of all the souls who were experimented on in this secret asylum. In fact that is some of their blood on the floor: 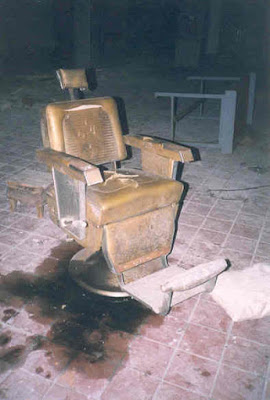 In all seriousness though, our state mental health institutions often amounted to little more than taxpayer-funded research pens and houses of torment for abused, unwanted patients.

A nitrous oxide connection in one of the operating rooms: 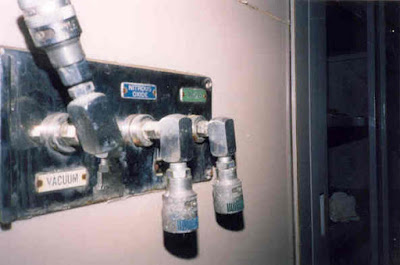 There was a small body cooler in the basement. Unfortunately all the trays were gone, so I could not reenact the infamous "Caveman Morgue Surfing Shot." 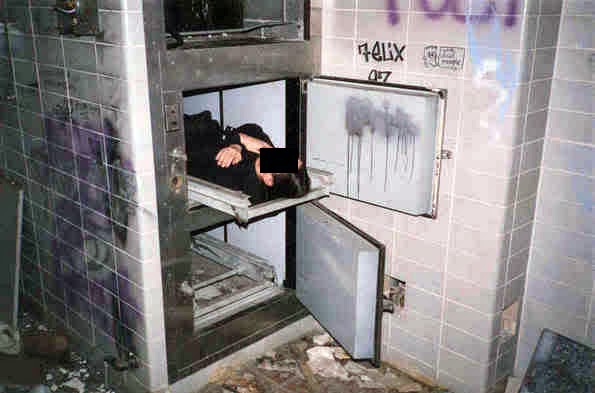 One thing that really stood out to anyone who visited this place was that despite the view from the building being very grand, it was almost completely filled up by the cemetery across the street, heh. Not exactly all that conducive to a positive psychiatric program for geriatric patients, I would guess.

Here was one of the solariums that projected from the ends of each wing of the building: 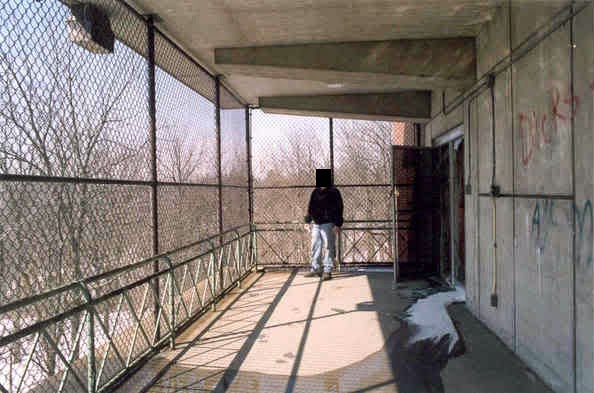 Demolition of the sanatorium was complete by the end of 2011, and supposedly a new housing complex is being built there now, but I haven't been by there since the building was standing. 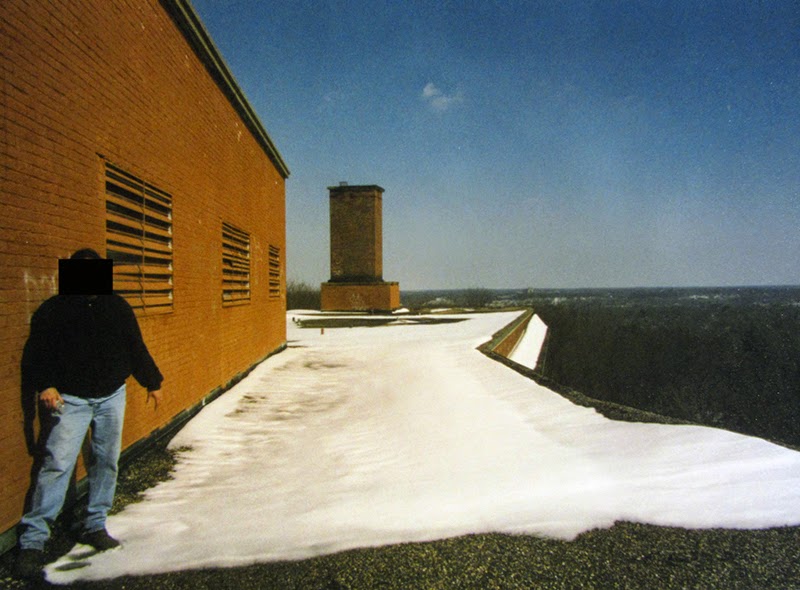 For what it's worth, here are a few shots of the still operational Kalamazoo State Hospital itself: 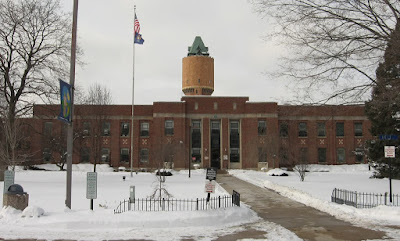 The watertower dates to 1859, but the original Kirkbride-style buildings were torn down and replaced with this Depression-era structure. 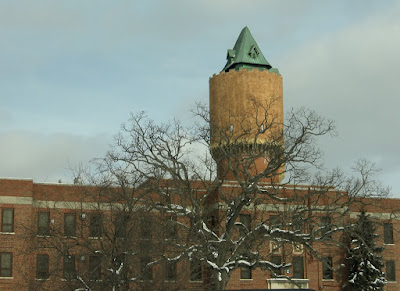