At some point or another every one of us has asked ourselves the question, "Just where did half of all the mint oil used in the United States in the early 20th century come from?" What's that, you don't really give a damn? Well anyway, the answer lies tucked away in the northeastern corner of rural VanBuren County, Michigan. 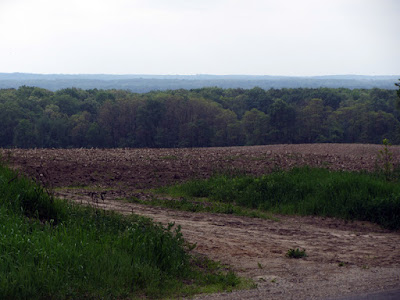 A long ride across sparsely marked country roads eventually led me to the bucolic site where the company plantation named Mentha once thrived--today it is a ghost town. In order to get to the ruins of the actual mint oil distillery however, I would have to park my truck and follow a former railroad grade on foot for about a mile. 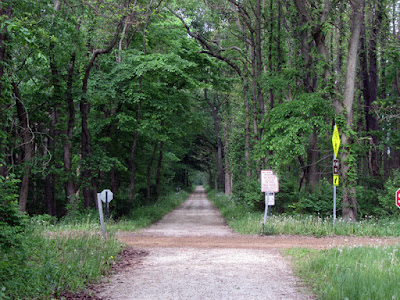 The lost railroad was the Kalamazoo & South Haven Railroad, which used to connect those two southwestern Michigan cities, back in a more prosperous era. Today you can still hike or bike its entire length if you so choose, but since I was on a schedule I cheated a little bit and took a shortcut. 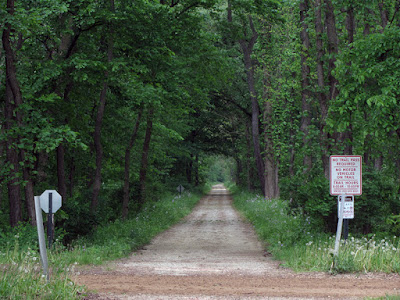 VanBuren County was set off in 1829 and organized in 1837, the same year Martin VanBuren, who became the eighth U.S. President after serving as Michigan's Secretary of State. The county seat is at Paw Paw and the population today is around 76,000 people. VanBuren County is still one of the major fruit-growing counties in America according to David M. Brown's Michigan County Atlas, and it also became one of the centers of the Michigan wine business after Prohibition ended.

It seems that by its low topography, rich soil composition, and proximity to Lake Michigan, VanBuren County was always destined to excel in agriculture. Brown lists blueberries, peaches, barley, pears, cherries, apples, asparagus, and peppermint as current crops, but it was spearmint that concerned the company town of Mentha Plantation back in the late 1800s and early 1900s. "Mentha," by the way, is Latin for "mint," and there were 2,200 acres dedicated to its production here. 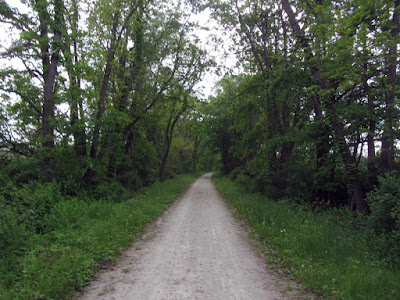 According to geo.msu.edu, a handy webpage from Michigan State University's geology department, the mint-growing business got its start in the old days in St. Joseph County, where settlers cultivated it in patches between the "oak openings" that once characterized southern Michigan.

By the time of the Civil War however Michigan's mint crop was rivaling that of New York for the top output in the nation. After the war, Michigan's mint farming business spread out from St. Joseph County into Cass and Berrien counties, then up into Van Buren, Allegan, and Kalamazoo counties. 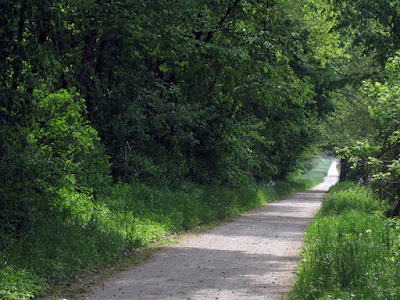 In the 1870s, according to Larry Wakefield's book Ghost Towns of Michigan, Kalamazoo businessman Albert M. Todd began acquiring and draining the swamplands that dominated this area, with the intent of turning it into one of the world's largest producers of spearmint oil. By 1900, 90% of the world’s supply of mint oil came from an area within 90 miles of Kalamazoo, and Todd was reportedly known "far and wide" as the "Spearmint King," having built not only the plantation but a company town of his own design around it for his workers.

The arrival of the Kalamazoo & South Haven Railroad facilitated Mentha's prosperity by giving access to the markets of the rest of the country, and the rest of the world as well via Great Lakes ports. Spearmint oil is used as a flavoring in chewing gum, and pretty much any other food product that tastes like mint. 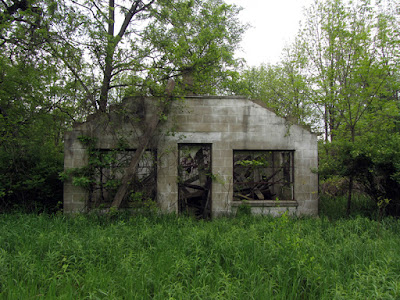 Mentha lived up to its allegorical name by becoming the thriving center of the American peppermint growing business in the latter 19th century; Wakefield says that the plantation was "fabulously successful," apparently yielding a bumper crop at every harvest, making Mr. Todd a very rich man.

This came to a screeching halt in 1924 however, when a blight called verticillium wilt began to devastate the mint crops of all southwestern Michigan. By the 1930s it was "an uncontrollable disease" David M. Brown notes, and all the mint fields had to be abandoned...just in time for the Great Depression. Brown says that mint farming relocated to Clinton County, but the wilt eventually followed and killed off the business there as well. 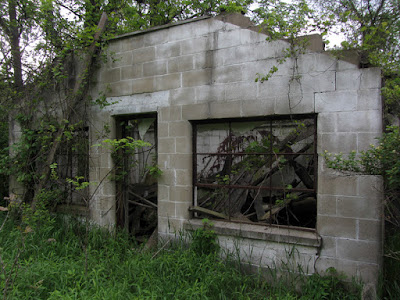 It seemed to me that a cinder-block building does not exactly come to mind when thinking of pre-1920s construction, though cinder blocks had indeed been invented by that time. 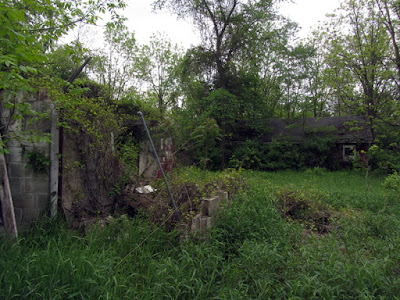 I'm thinking that these red structures with the smaller windows were housing for farm workers while the ruined building with the larger steel-sash windows was the distillery itself. 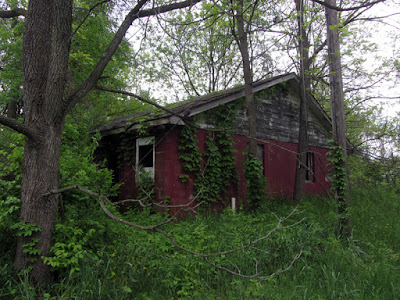 There were 300 people employed on the plantation, and their families lived here too. According to Larry Wakefield, Mr. Todd built housing for all of them, plus a town hall / post office / school building, and company store. As with any company town Todd's benevolence only went so far, and he imposed strict rules on the residents of Mentha--alcohol was forbidden, and so was "fraternizing" with members of the opposite sex. 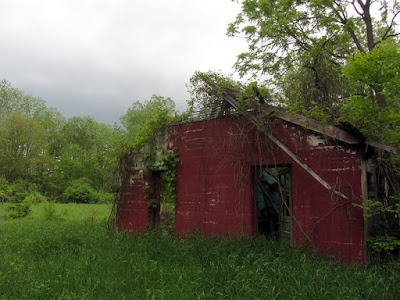 Wakefield says that some of the workers stayed and tried farming other crops, but most of them gave up and moved on. By 1954 the mint-growing days of VanBuren County had completely come to an end, and Mentha ceased to be.

The land was sold or leased to other farmers and it still produces good crops of onions and radishes to this day, but quietly off in the corner of a field these decrepit reminders of the past still lie, slowly being wrapped up in poison ivy: 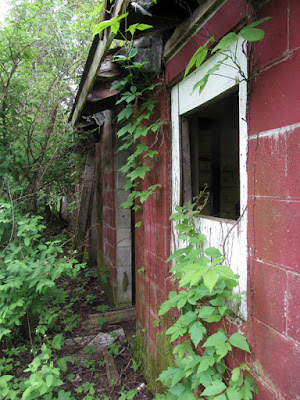 I wonder if the buildings of Mentha were ever used as a crystal meth lab since that is another profitable "crop" that comes from this area of the state these days, heh. 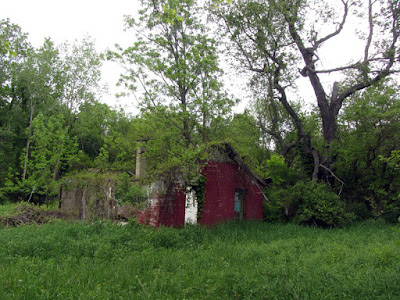 From what geo.msu.edu said, the caveat of draining these low-lying mucklands to farm their dark, fertile prairie soils was that in wet years the fields could flood, retarding cultivation and harvesting, or requiring extensive ditching to bring the water table down. Also, the growing season was narrower because the wet soils were more susceptible to damage from late-spring or early-fall frosts.

I went inside one of the intact red buildings: 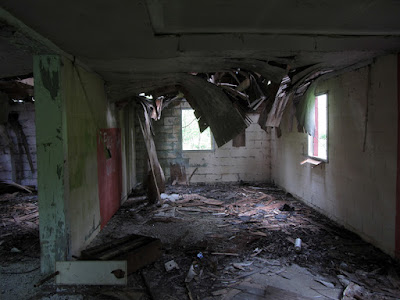 Though mint yields were always excellent in this region, according to MSU one of the problems that presented itself in terms of marketing product was that some "unscrupulous" mint oil dealers would try to stretch their profits by adulterating their mint oil with turpentine, alcohol, or fireweed, which made buyers wary.

There was no way to test the purity of mint distillates in the old days, so it was difficult to guard against these shady practices. Luckily, one advantage to being a mint grower is that the oil can be stored for several years if necessary, if the market is not favorable. 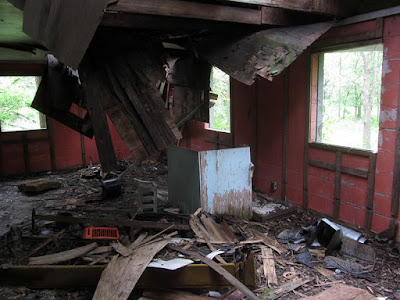 MSU stated that mint husbandry was eventually improved when two commercial experimental farms were established--one of which sounds like it might have been here at Mentha--to develop hybrid mint plants and better agricultural techniques. Better rootstocks were developed from Black Mitcham mint, imported from England for its hardiness and quality as compared to domestic varieties, and distillation technology was also improved. 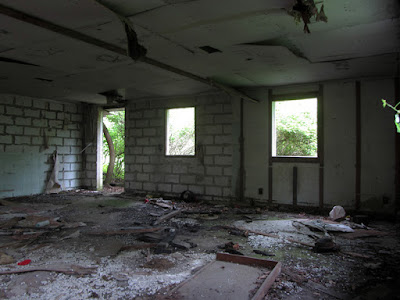 This building was divided into three or four long, rectangular rooms, all of which were connected in the middle by doorways that didn't quite line up with each other for whatever reason: 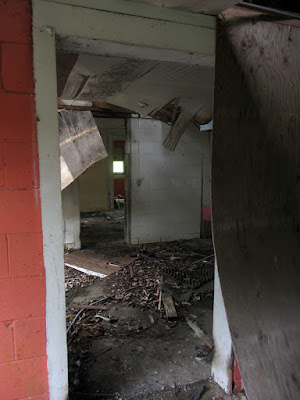 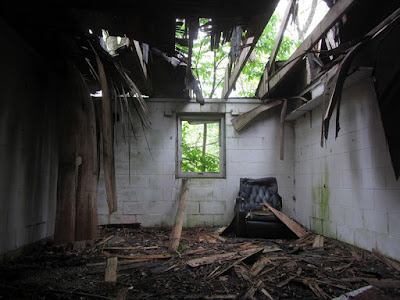 Mint oil was originally distilled just like moonshine using a copper kettle and condenser pipe, but in 1846 the introduction of the steam distillery increased production capacity to over 100lbs of oil per day. With all these stills laying around, I wonder what might have been going on behind the scenes in southwestern Michigan during the Prohibition era, despite Mr. Todd's paternalistic restriction on booze for his workers in Mentha. 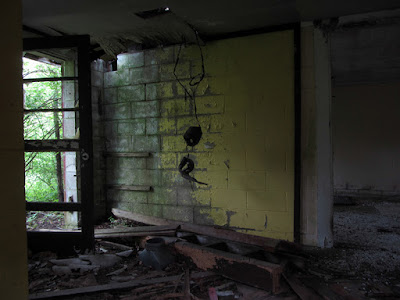 According to geo.msu.edu it took about an acre of mint to produce 30lbs of oil, which is of course highly concentrated. Mint oil was used mainly for medicinal purposes, but with the invention of chewing gum, toothpaste, breath fresheners, and various mint-flavored candies, the demand for mint oil went up considerably. One pound of oil was enough to flavor 135,000 sticks of gum. 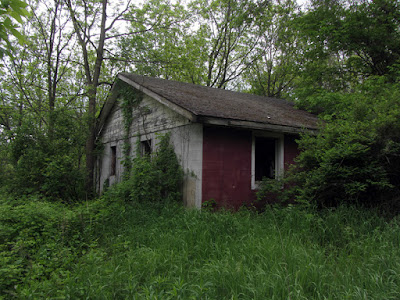 Turning back to the more utilitarian-looking building with the larger steel-sash windows, I think this may have been the actual distillery: 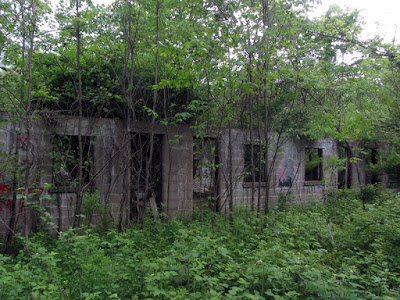 The interior is totally laid to waste though, and no traces were left behind of its former use. 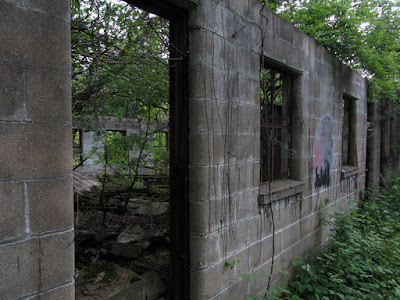 There was plenty of evidence however that it was a hangout for local kids. 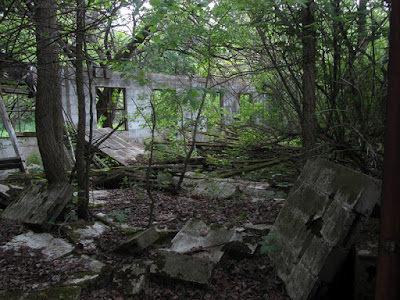 By the size of a couple of the trees growing out of the floor, I'd say this building's roof collapsed at least 10 or 20 years ago, possibly due to a catastrophic fire. Hmm, did meth labs exist back then? 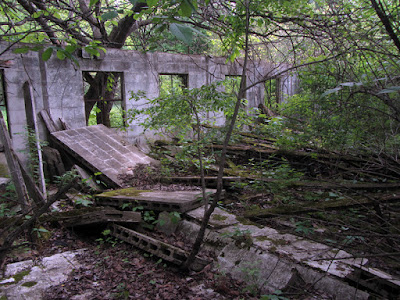 The density of the foliage and mugginess of the air today made it seem as if I were on a banana plantation somewhere in South America rather than a mint plantation in Michigan. 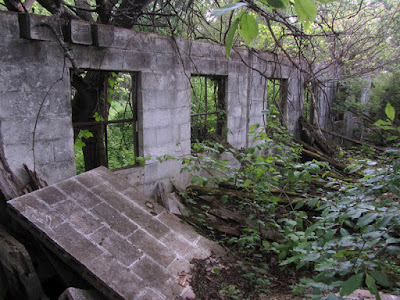 A springtime rain squall hit as I drove away down a lonely farm road. The rich black soil of the fields had just been freshly planted for a new season. 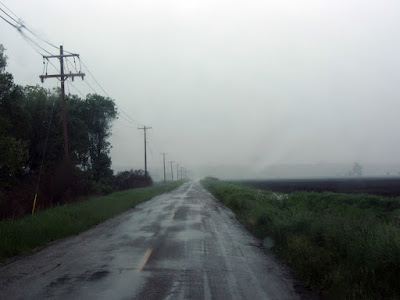