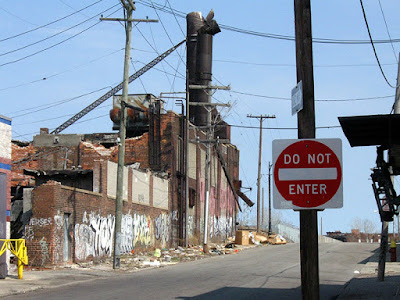 Cruise through the Eastern Market area and you'll probably notice one or two abandoned warehouses, the current largest of which is undoubtedly the former Thorn Apple Valley Detroit Slaughterhouse at 2900 Orleans (corner of Wilkins).

It didn't start out life as a slaughterhouse though, as according to the Sanborn maps of the location this "Factory Blg" as it is labeled was built in 1937 as Allen Industries Inc., Plant B, who manufactured "carpet pads" there. An earlier map (1921) shows a scrap iron yard on this spot where the building would be.

Thorn Apple Valley is a brand name that I grew up with and took for granted as a universal thing--I assumed that it was just a national brand that everyone had on their supermarket shelf, and had no idea that the company was actually founded and based in Michigan. A very detailed history of the company can be found at fundinguniverse.com (though it draws pretty much everything from the International Directory of Company Histories, Vol. 22, 1998).

It says that in 1949 a Mr. Henry Dorfman emigrated to the United States from Poland, settled in Detroit, and opened a butcher shop. By 1959 he must have been doing well enough that he was able to buy up the Frederick Packing Co., a small hog slaughterhouse. His company purchased, butchered, and sold pork to both consumers and wholesalers, and continued expanding by acquiring other small slaughterhouses and meat processing plants around the Midwest and in the eastern states.

I explored and talked about Detroit's meatpacking industry in much greater detail in a different post about the Hammond & Standish Co. slaughterhouse.

In 1977 the company reincorporated because of changes in Michigan's business laws, and at that time their corporate headquarters was located in the Detroit suburb of Southfield.

This building was Thorn Apple's Detroit Slaughterhouse, and it backed up to the Dequindre Cut railroad line, across from the Schmidt Brewing Co.'s bottling department (seen at left):

Dorfman also sought to reframe the company's image as a producer of high quality and premium brand products, and in 1984 that's when the company took on the name "Thorn Apple Valley." But just in case you thought that was just some made-up idyllic-sounding name to sell sausage links, there is actually a Thornapple River in lower Michigan, a tributary of the Grand River, whose source is in Eaton County.

This slaughterhouse was closed down in 1986, and production was moved to up to a plant on Farnsworth, across the street from Fisher Body Plant 10.

In 1987 Thorn Apple Valley reorganized, and son Joel Dorfman took over the reigns of the company from his father. As of the next year Thorn Apple began expanding operations in the western U.S. by continuing to make acquisitions, while "tightening" their management structure, making "continued alterations to the marketing plan," and establishing a central distribution warehouse in Detroit sometime around 1991. Thorn Apple's Deli and Smoked Meats Division plant was also located in Detroit, at 3925 Tillman Street (now demolished).

The year 1991 was a very good year for Thorn Apple Valley, when they could boast of having the highest percentage of return on invested capital of any food and beverage company (38.4%) and the fourth best percentage sales gains, which topped even better-known companies such as Coca-Cola, Kellogg, and General Mills.

The production levels in the Detroit plant for 1991 increased from 200,000 pounds weekly to over three million pounds weekly. That's a lot of damned sausage, and I know I ate my fair share. Later that year Thorn Apple acquired Cavanaugh Lakeview Farms in Chelsea, Michigan, a seller of gourmet meat products.

The company made significant capital investments in its existing plants during the 1990s, and even built a new plant from the ground up for the first time. Thorn Apple's fresh-pork slaughterhouse at Frederick Street and Farnsworth was renovated, although it was plagued with problems in its sophisticated hydraulic-driven conveyor system that took a whole year to iron out.

When functioning properly, this upgraded plant was projected to be able to slaughter and process 1,800 hogs an hour, which was more than double the capacity of any of their competitors.

Thorn Apple continued to restructure though the mid-1990s, and Smithfield Foods again approached the Dorfmans with a buyout/merger proposal in 1997, but they again rebuffed the offer. Believing that their intensive restructuring efforts were beginning to pay off, Thorn Apple continued to forge ahead, but an unforeseen disaster was about to strike.

The book Food Alert!: The Ultimate Sourcebook for Food Safety tells of a massive meat recall that Thorn Apple Valley was forced to undergo by the USDA in January of 1999 as a result of products from its Arkansas plant that may have been contaminated with listeria, which amounted to 30 million pounds of hot dogs and lunch meat. I have to wonder where they put all the crap to dispose of it. The recall occurred despite the fact that Thorn Apple's meats were produced under one of the most comprehensive health and safety programs in the business--and under inspection by the USDA.

Apparently the company's PR took a sudden nosedive as a result of the massive recall, because they issued a statement a couple months later reiterating to the public that only the meats produced in the Arkansas plant prior to a certain date were affected, and that everything else on the shelves was perfectly fine. Furthermore, the USDA stated that no one ever became ill as a result of the products in question.

Nonetheless I am going to have to assume that the reason Thorn Apple ended up in bankruptcy court later that year had something to do with the recall, and the fallout with consumers from said recall. They were bought out in July 1999 for $115 million, proceeds all going to satisfy the $182 million debt to their creditors. And that explains why I haven't seen a Thorn Apple Valley sausage in almost 20 years.

I climbed up the watertower for a better view of my surroundings.

Just up the tracks, the abandoned silos of the Peter Koenig Coal Co. still stood:

Looking down at the Schmidt Brewing bottling plant again:

Cass Tech peeking out from behind the now-demolished Brewster-Douglas Towers:

Eastern Market from above, in all of its grimy glory:

It's too bad these photos aren't scratch & sniff, so that you could experience the heady summer aroma of rotting sheep hides piled in a leaky dumpster, the backed-up sewer drains, or the acres of expired hams and various discarded vegetables strewn about in the backstreets or the Dequindre Cut itself.

When people talk about "Pure Michigan," those are the types of things that come to mind for me, not just the idealized tourist billboard images of Belle Isle or the Mackinac Bridge. In fact, here goes a truck full of entrails right now: 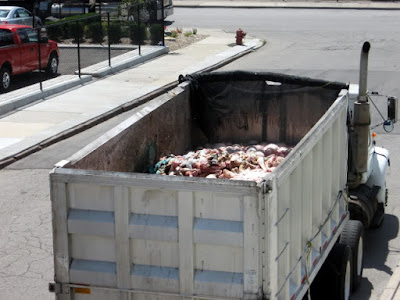 Perhaps the most perfect view of the Dequindre Cut:

The green horizon in view here is actually Windsor, Canada:

Eastern Market is one of the few areas of the city that has any of what the urban planner types like to call "density," but it's mostly warehouses and butcher shops:

This slaughterhouse was put on the list of 50 blighted sites that Kwame Kilpatrick's administration announced they would demolish in 2008. The list included a $612,000 estimated pricetag for the demolition work, but the building still stands today.

Personally, I think this old "eyesore" could be a pretty sweet loft conversion, and that's coming from someone who generally rolls their eyes at that sort of thing when it results in reduced available commercial space. With the EPA cleanup completed, and the Dequindre Cut "Greenway" project now at the very doorstep of this abandoned behemoth, the time seems ripe for it. Imagine how much better it would look if you knocked all the bricks out of the windows and put large sash windows back in...

Though I would not recommend the book overall, Mark Binelli's Detroit City Is the Place to Be has a funny interlude where he meets a man that used to work at this plant, and who said that he had the horrible job of using a whip to herd the pigs into the abattoir. Yummm...

The roof on this place was big enough to hold a baseball game, but not a lot of people made it up here since if I recall correctly the stairs had been ripped out and the only way up was by a very shaky, broken 14-foot wooden ladder someone had propped up against some pipes on the wall...

Despite being located near the heart of busy Eastern Market, there were some parts of this property that looked fairly apocalyptic, and at least the lower floor / basement of the building served as a homeless colony, which explains why the floor was entirely covered in layers of rubbish. It seemed like for a little while there were dozens of people living in the downstairs of this place on the loading docks that faced the railroad tracks, and it reeked to high hell.

It was the very picture of everything that Hollywood movies have taught you about the ominous squalor in which the other half lives, here at the dark, rat-infested underbelly of society. Nor was it uncommon to hear the lurid groans and lunatic ravings of its addled denizens echoing through the vacant corridors of this lair.

And I generally stayed away from this place in the mid-2000s for the most part, since it was literally home to a lot of folks, and I've always been generally shy of barging into peoples' living space with a camera--not so much out of fear of what might happen in the dark, what with shankings and shivvings and all that--but out of politeness.

By about 2010 however they had already moved on, sort of like the forced mass exodus that cleared out Michigan Central Station in the early 2000s, or the Eddystone Hotel, so the stench, and the sense of danger have lifted somewhat. But you have to wonder what happens when large groups of homeless people suddenly disappear...did they simply move on to greener pastures of their own accord, or were they rounded up and put into trucks and dumped in some remote area, as the Detroit Police have done on many occasions in order to make downtown look "clean"? Who cares what happens to people if they're poor, just so long they're gone, right? Go Tigers!

Or is there some human slaughterhouse out there somewhere in the middle of the urban prairie where they take all of the homeless people to be ground up into cheap meat for slathering all over coney dogs, in turn feeding them back to the plump tourists who belly-up to the counters at Detroit's signature downtown eateries?

As we were leaving the slaughterhouse one night we spotted a fire going in one part of the building that seemed to have been a campfire for someone...but upon closer investigation we found nobody in sight. Perhaps they had just been abducted and taken to be ground up into coney dogs? Makes one wonder how Thorn Apple achieved its goal of three million pounds of meat per week...free range human is much cheaper than pig any day of the week.

Somewhere out of the darkness we heard a pained howl, as of someone struggling against unseen enemies. Just another eerie night in Detroit.