The Last Thing People Give Up is Eating

Over the course of many years of visiting the Michigan Central Station and looking out from the southern windows to see its huge white hulk flaking away next to the railroad tunnel from Detroit to Canada, I naturally became curious about the eight-story warehouse that stood at 1448 Wabash near the corner of Bagley, and whether it would ever "become explorable," to use one of my euphemisms. 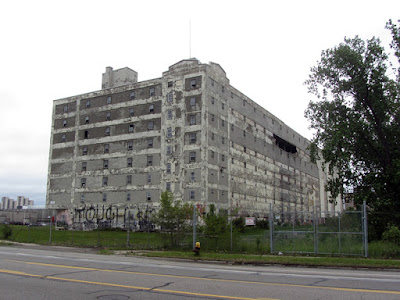 It became evident that the building maybe wasn't being looked after as well as I had figured when a large section of wall crumbled away from the 7th floor, leaving a gaping hole in the side of the building, so that was when I started seeing about taking a closer look. 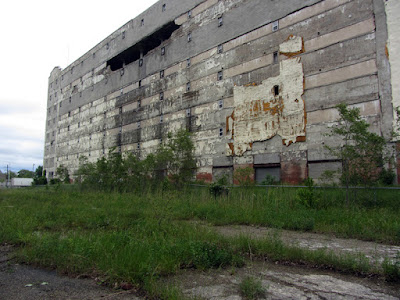 One of the first things that I noticed was the fact that much of the area was paved in a herringbone pattern of bricks, which made me think that maybe there was an older factory here at some point, but upon further investigation I'm thinking that it was actually just the alley paving from when this was a residential street: 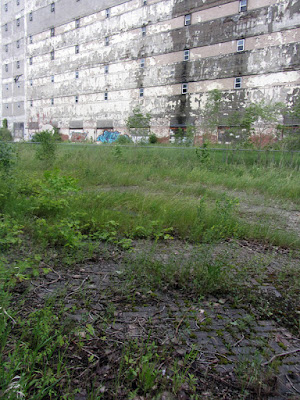 The Sanborn map for 1921 shows three houses at 1503 to 1517 Wabash, three houses on Baker (Bagley) Street, and nothing else on the block. In other words, this warehouse wasn't built until after 1921. The c.1897 Sanborn map shows this block to be crowded with Victorian era houses, all of which are now torn down.

Here is a historic photo of the building I found at placepromo.com, taken in 1976: 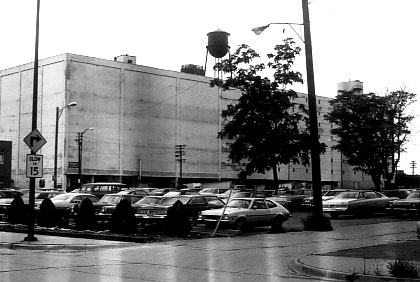 There was a bit of a front "lobby" I guess, a corner of the building that occupied maybe 20'x20' at the most, with fancy stairs going up to the main offices: 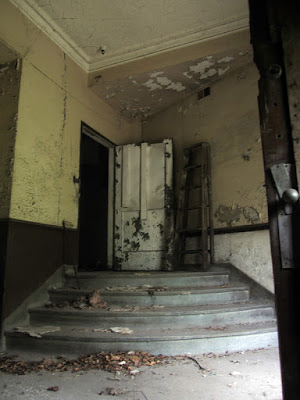 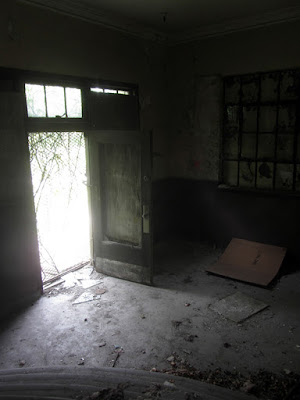 Naturally I wasn't expecting the interior of the joint to be Taj Mahal-dazzling, but you never know what you could come across in these ubiquitous mushroom-column warehouses that someone might've decided to leave behind. 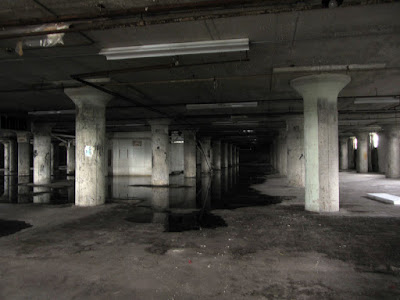 In fact it looked like a cold storage warehouse to me, so I expected it to be even more dull than usual, but I held out hopes that at least the roof would lend a new and exciting vantage-point from which to look out at the rest of the city. 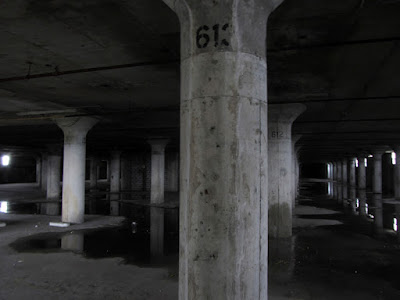 Not surprisingly, researching the "history" of a cold storage warehouse is not all that easy or productive, but a quick search on the address turns up a hit from emporis.com, who list it as being constructed in 1926, by the United States Warehouse Company. Real creative name, huh?

Glancing through period trade journals via Google Books, it seems that the mid-1920s was when Detroit experienced a boom in construction of cold storage facilities and other such warehouses for holding the goods that would feed the city's burgeoning worker population. Among them were C.F. Smith's warehouse, Grand Trunk Cold Storage, West Side Cold Storage, and the Port of Detroit warehouse (now better known as the "Boblo Terminal"). 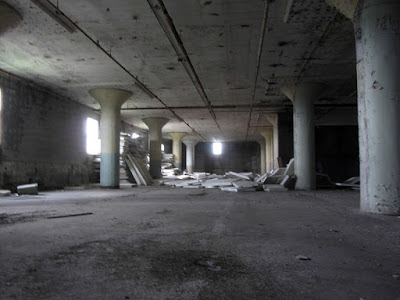 Google Books also turned up a hit in a 1932 volume of The Michigan Alumnus, which contained a note on a Mr. Walter Paul Colwell, University of Michigan Class of 1929, who was employed here in the Detroit office of the Great Atlantic and Pacific Tea Co. (better known as A&P).

An entry on findagrave.com turns up a grave listing for Mr. Colwell, saying he lived from 1907 to 1997, and is buried in Arizona. 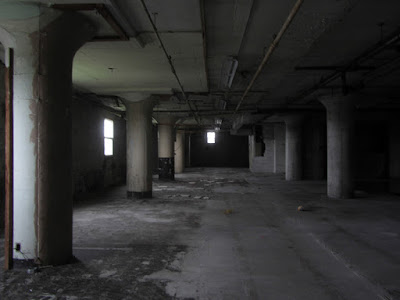 I imagine A&P leased floorspace from the United States Warehouse Co. somewhere here in the building, which perhaps explains why each floor has its own identical office space area up front. Here on the 4th floor there is still a label on the wall showing that "Loewenstein Poultry & Game" had offices here as well. 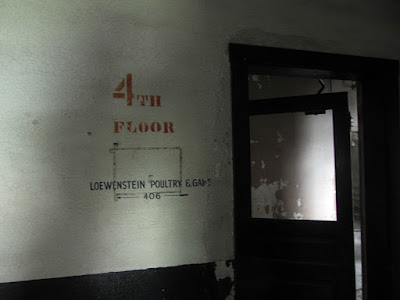 The company still exists today as "Loewy Foods, Inc." and is based in Chicago, but Max Loewenstein started the business at a stand in Detroit's Gratiot Central Market in the 1890s, and the family made a name for themselves here in the D according to the company history on their website.

Apparently they moved out of Detroit in 1981, but in 1987 they purchased the Michigan Cold Storage warehouse in the suburb of Taylor, at 21740 Trolley Industrial Drive. I'm guessing that's also when they vacated their facilities here on Wabash Street. 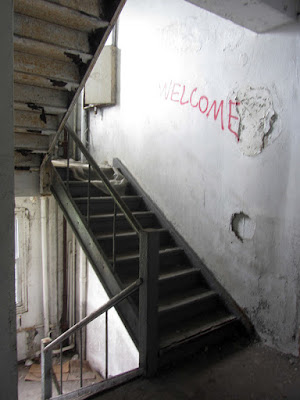 In 1948 Loewenstein Poultry was primarily a wholesaler of poultry products to country clubs, restaurants and institutions, and were then based in the Broadway Market Building downtown. Max's son Marshall Loewenstein said that the family business survived the Great Depression because even with all of the sacrifices people make to get through hard times, "the last thing people give up is eating." 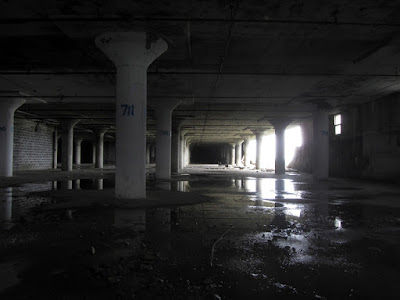 Marshall's son Mark Loewenstein submitted a comment to this post sharing several memories of growing up with his family's business in this building. He said that the building was also owned by U.S. Cold Storage, then Armen Berry Warehouse, and even had a barber shop on the ground floor when he was a kid.

I knew I'd arrived on the 7th floor when I noticed a spill of light coming in through the huge hole in the side of the building... 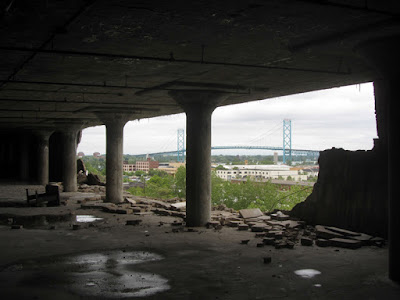 Now if that view doesn't make you a little wobbly in the knees, not much will: 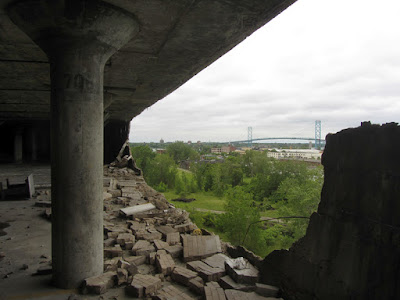 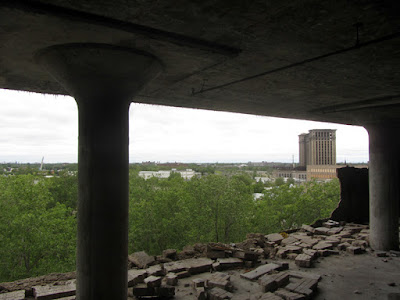 Speaking of C.F. Smith's warehouse, here it is poking up above the trees in front of St. Hedwig's spires: 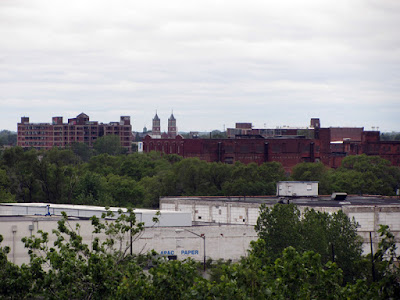 A view out towards Dearborn and the Ford Rouge Plant: 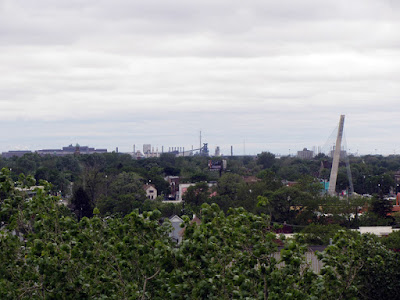 Of course, Ste. Anne's, with the Ambassador Bridge, Boblo Terminal and Zug Island behind it: 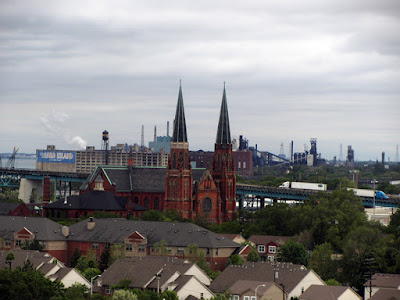 Michigan Central Station, Roosevelt Warehouse, and behind them the Southwest Detroit Hospital: 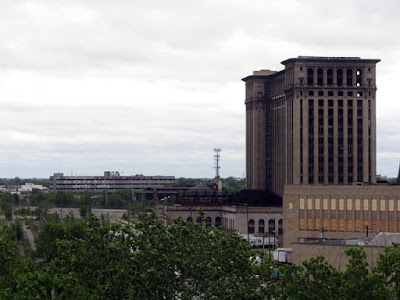 The roof of this place was very reminiscent of the Boblo Terminal: 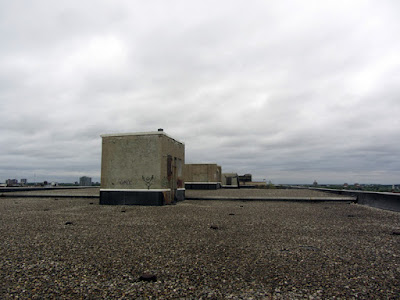 The view of downtown itself was a little less exciting than hoped for, I'm sad to say. 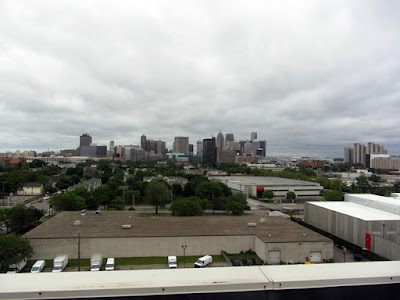 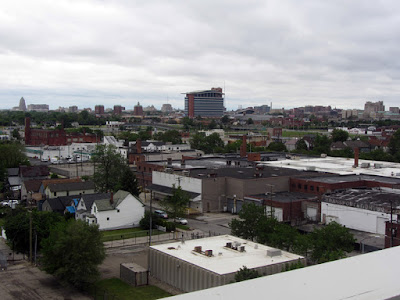 This building will probably sit here for a while longer until there is a need for cold storage in this area again, or until Corktown becomes so ridiculously popular that someone converts it into lofts. Then someday when Detroit becomes as gentrified as Brooklyn, NIMBYs will undoubtedly complain when companies try to build big ugly industrial structures such as cold storage warehouses in the area to serve the burgeoning population...while simultaneously complaining about the rising cost of living and food prices in the city. 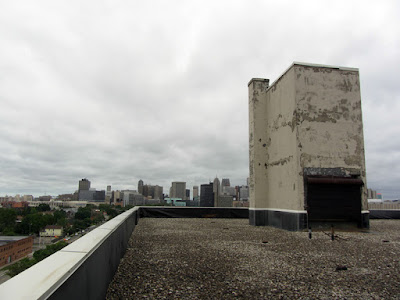