Wherever Two Or Three Are Gathered In My Name


Winters in Detroit can be exceedingly long and infuriatingly tedious, calling for the occasional extracurricular activity to break up the boredom and sloth. I decided to check out a few places out along East Warren on a cold crappy day, one of which was the parish school of the former St. Margaret Mary Catholic Church at 5075 Lemay. 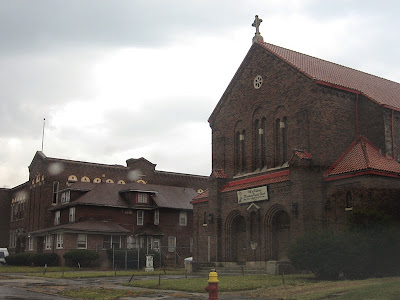 In the 1920s when the Motor City's population was blossoming by leaps and bounds, according to the book Seasons of Grace: A History of the Catholic Archdiocese of Detroit, Bishop Gallagher was anxious to establish churches in areas that were developing at the fringes of the Old Detroit--often at the same time as the new houses themselves were still under construction. 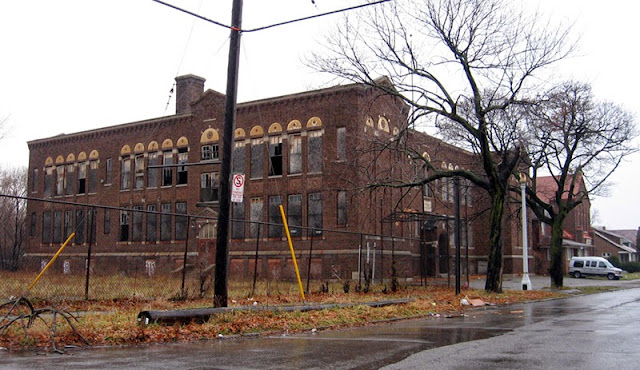 In 1920 Fr. John Koelzer was asked to start a sister parish to St. Bernard's in the developing area to the north of it, a parish that would become St. Margaret Mary's in the Warren / French Road neighborhood on city's east side. 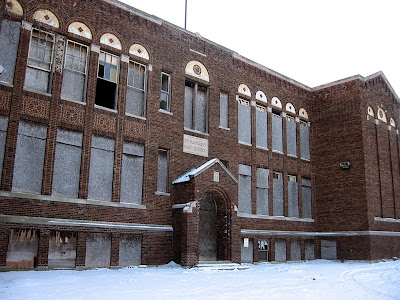 Fr. Koelzer's recollections of his trek out to that location portray perfectly that exciting yet hectic time in Detroit's history as it struggled through the growing pains of rapid population growth. "Soon the sidewalk stopped and the mud began," he wrote, and described in deadpan matter-of-factness how both Warren Avenue and McClellan Avenue were also still unpaved messes of sticky mud. 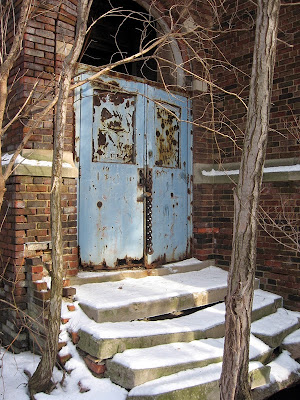 St. Margaret Mary's began as humbly as Catholicism itself had in ancient times--in borrowed space wherever people could be gathered together until a more permanent sanctuary could be afforded. It wasn't long however before the "precipitous" build-up of the area had this muddy backwater transformed into a bustling and prosperous working class neighborhood with paved streets and sidewalks, and the urban frontier had pushed well out to the Grosse Pointes and beyond. 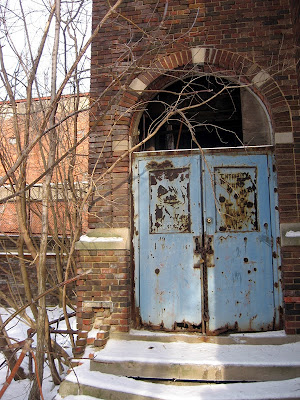 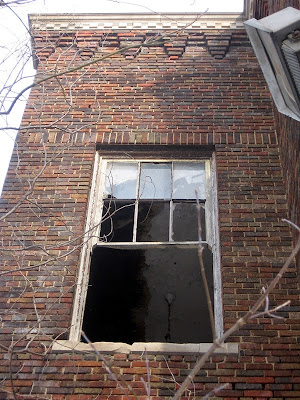 A couple books about Italian-Americans in Detroit state that many Italians and Sicilians made up the congregation of St. Margaret Mary's, having migrated out of the city's center along Warren and Gratiot Avenues. The total ethnicity of this neighborhood was actually quite mixed at the time, including many Belgians as well.

We considered dropping down into the basement via this gap under the steps, but that looked decidedly risky: 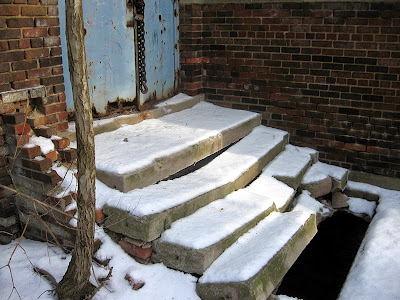 The church and school were both designed by Donaldson & Meier, the same architects who are also known for designing many other churches in the city such as First Unitarian, Most Holy Redeemer, St. Aloysius, St. Hyacinth, the St. David Parochial School, as well as the archdiocesan headquarters (the Chancery Building and the Sacred Heart Seminary) and several other important Detroit landmarks, including Cooley High School and the David Stott Building. 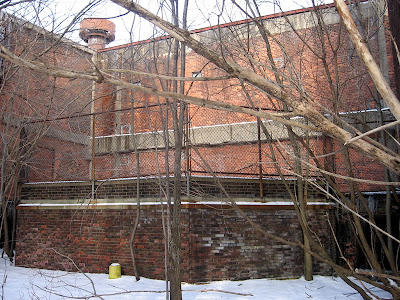 Ironically this icy maw looked like the safest way into the building for us today: 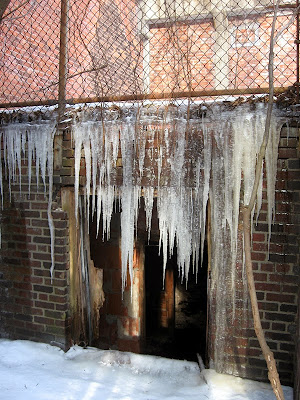 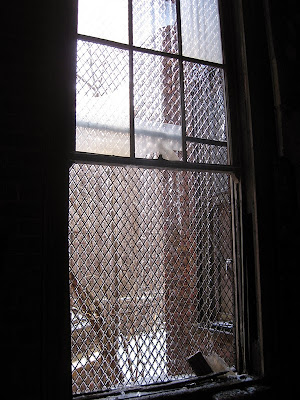 A few flecks of the original painted designs on the wall still showed here on the last scraps of plaster clinging to the wall: 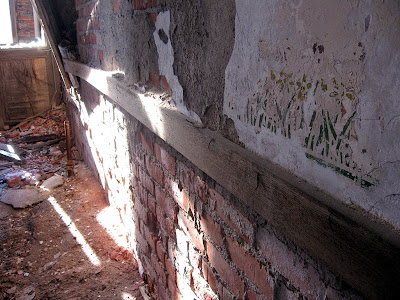 As fortunes changed in Detroit the school closed in 1970 according to bishopgallagher.org. Roman Godzak's book Catholic Churches of Detroit says that by 1982 the parish had shrunk even further to a mere 65 members and the building was due for many costly repairs, so naturally the doors were closed. 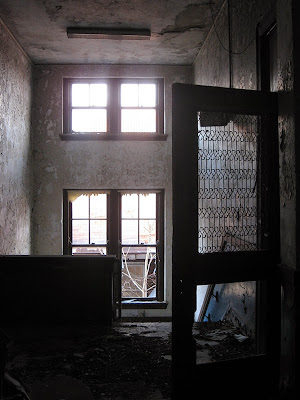 The church building was not abandoned however, and was soon bought by a Baptist congregation who renamed it the Hill of Calvary Missionary Baptist Church and used it until 2012, though the school seems to have been left by the wayside. Since the new flock was obviously of lesser means than the one that founded the parish decades ago, the school building continued to decline in condition though the community fought to keep Lemay Street strong.

If I remember correctly they had a block club and home-made signs welcoming you to the Lemay-Lillibridge neighborhood. 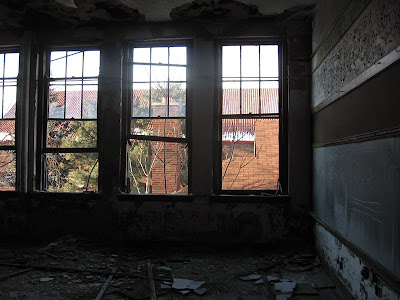 Two years after my 2008 visit, a "ruin-porn" photo of a classroom in this school was featured in the famous/infamous Time Magazine essay by Yves Marchand and Romain Meffre--I think it might've been this same room. Copy-cats... 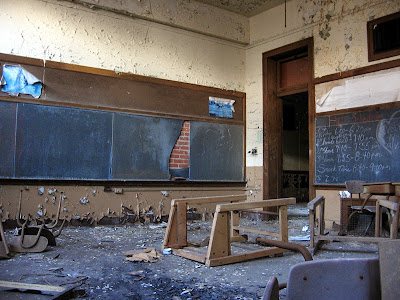 The church sanctuary itself suffered arson damage that prevented the members from using it anymore after the year 2012 and, like the school, has been vacant ever since. 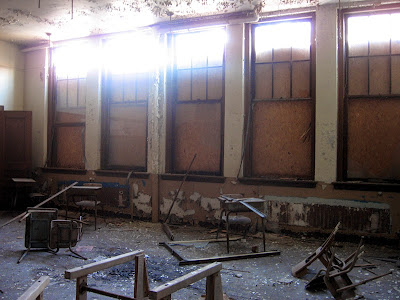 Instead of lockers in the school hallways, there were these rows of hooks in a narrow coatroom between every classroom: 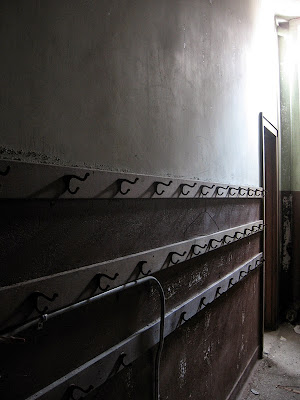 The parish house was still in good shape yet, and the Spanish-tiled roof of the church itself can be seen beyond it: 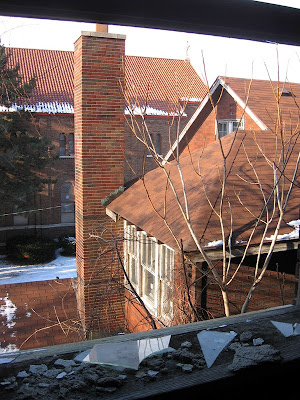 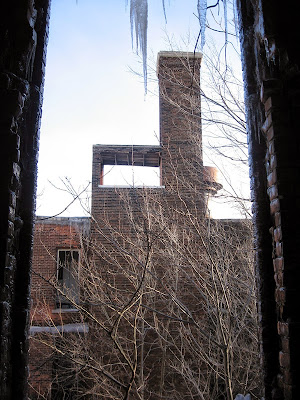 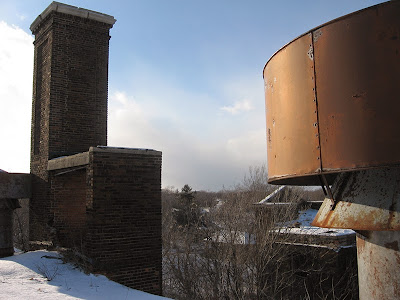 I think this smokestack in the distance may have belonged to the Federal-Mogul Forge, which I also checked out that day: 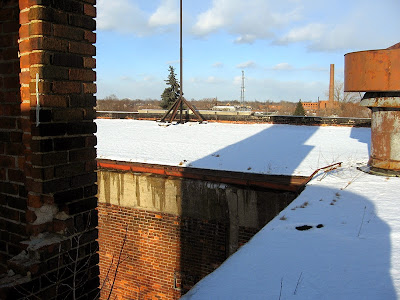 The abandoned Brewer Recreation Center was also not far away to the south. 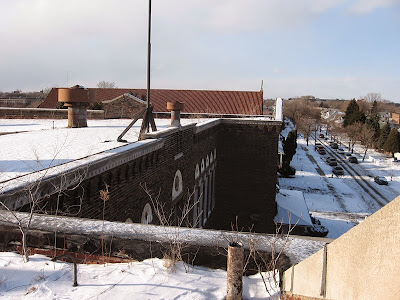 An ice beard draped down the side of the school in the long absence of any gutters or downspouts: 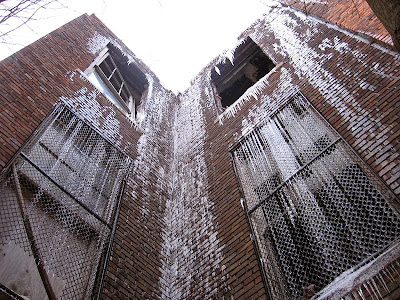 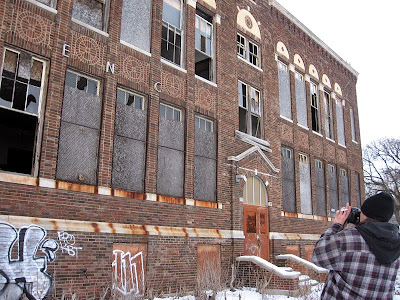 Some nice decorative accents adorned every corner of the school's facade: 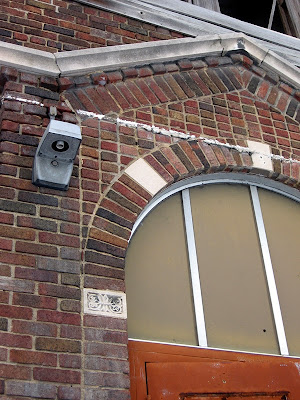 The masonry style actually reminded me a lot of the Wayne County Training School. 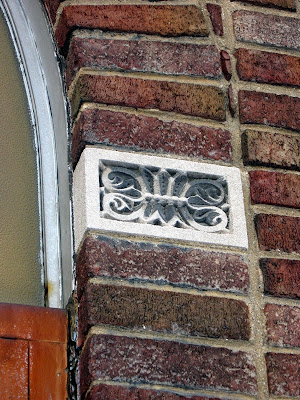 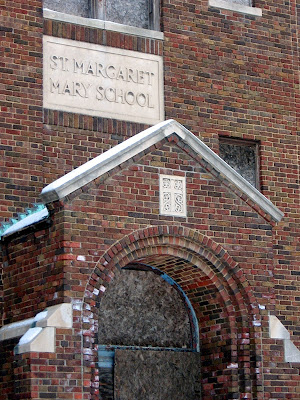 I made a nighttime trip inside the St. Margaret Mary Church itself much later, though the place had been trashed by that time... 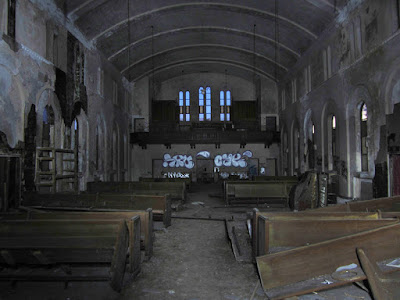 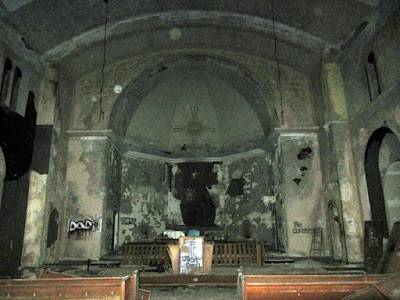 View from the choir loft, where the pipe organ had already been disassembled: 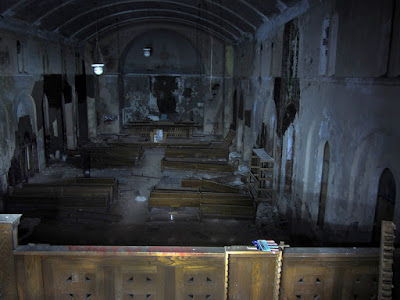 References:
Seasons of Grace: A History of the Catholic Archdiocese of Detroit, by Leslie W. Tentler, p. 306
http://www.bishopgallagher.org/2012/02/heritage-lost-st-margaret-mary-school-detroit.html
Catholic Churches of Detroit, by Roman Godzak, p. 113
Italians in Detroit, by Armando Delicato, p. 43