Fred Sanders and the Chocolate Factory


In Highland Park at 100 Oakman Boulevard, within the 100-block area that the local nonprofit Focus: Hope is now terming their "Hope Village," stood the main plant of the Detroit icon, Sanders Confectionery. Sanders candy products stood next to Vernor's, Faygo, Better Made chips, and coney dogs as the most beloved hometown food items in Detroit history, but they have all but ceased to exist today.

I'm not old enough to have gone on one of the plant tours they used to do back in the heydays, but I did sneak inside in early 2011 for my own self-guided tour. There were no Oompa-Loompas or chocolate rivers like I was hoping. 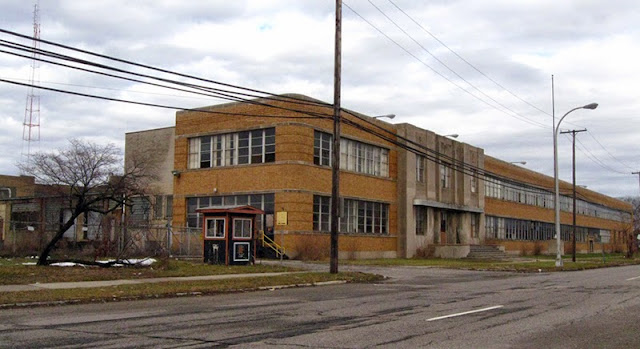 In July of 2012 (over a year after I visited), a suspected arson destroyed this plant in a massive inferno that took three days to fully extinguish. Today all that remains standing are blackened ruins that resemble a homemade attempt at Bumpy Cake gone horribly wrong.

Fire crews from Highland Park, Detroit, Hamtramck and even the northern suburb of Berkley responded to the massive blaze, but the size of the 425,000-square-foot plant, and the fact that the heart of the fire was in the center of the plant--which had already mostly collapsed--prevented them from getting close enough to properly fight it. 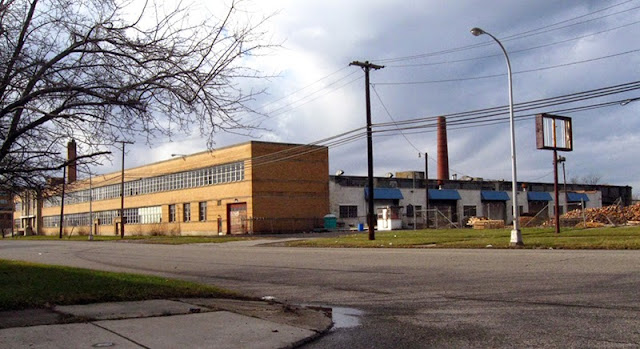 Just down Oakman Boulevard can be seen the large art-deco tower of the old Yellow Pages Building, which was vacant too until Focus: Hope recently had it renovated: 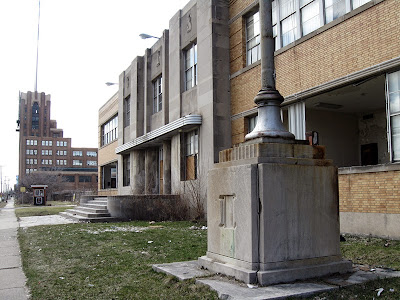 According to my colleague Ben Gravel, the architects of this plant were Pollmar, Ropes & Lundy, who also designed the Chatsworth Apartments at Wayne State University. Some of the relief carvings on the facade of the office wing here look like they could have been the work of Corrado Parducci: 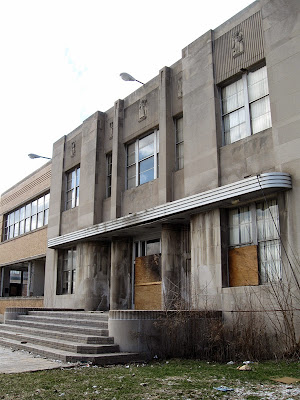 There wasn't a lot left behind in the way of interesting equipment here; Sanders took most of their machinery with them I suppose when they expanded into their new plant in 1994, leaving this place fairly empty. I didn't really take any photos from the main factory space, mainly because it was not all that photogenic, but I do remember there being massive amounts of pallets stacked everywhere (arson bait). 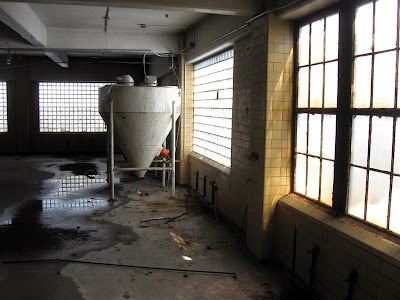 According to their own corporate webpage, Sanders Chocolates was founded by Fred Sanders on June 17, 1875. Eventually, there were more than 57 stores in the Great Lakes alone, selling candy, fudge toppings, and baked goods, as well as light lunches and an assortment of fountain counter specialties, including ice cream sodas, sundaes, and the legendary Hot Fudge Cream Puffs.

I can at least say that I am old enough to remember having a Sanders Hot Fudge Cream Puff, albeit at suburban Wonderland Mall instead of a proper Sanders counter. 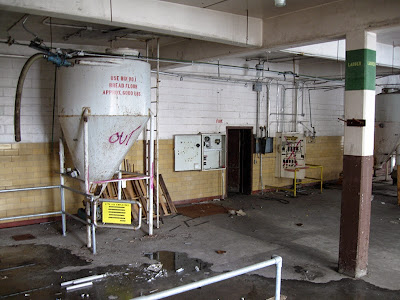 The story goes that on a hot summer's day in 1875, Fred Sanders inadvertently invented what was thought to be the first ice-cream soda. His milk and cream turned sour one busy afternoon, so he substituted ice cream, and the drink was an immediate success. Historically speaking, Sanders can't quite claim the title on that one according to the book Sanders Confectionery by Greg Tasker, but he was definitely the first in the Detroit area to do it at least. 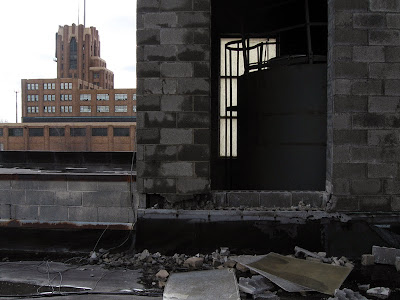 Another great little anecdote links Henry Ford to the Sanders saga. According to their corporate website again, they were one of the first companies in Detroit to use electric motors to run their equipment, but Fred Sanders started to have a lot of trouble with the glitchy, newfangled motor conking-out all the time, and he threatened to kick it to the curb.

Allegedly Thomas Edison talked Sanders into giving the motor another try and sent over a repair man...who happened to be none other than young Henry Ford, who was still working as a mechanic at Edison Illuminating Company in those days. I suppose Ford fixed the issue and all was well again, since Sanders doesn't seem to have been powering this plant by waterwheel. 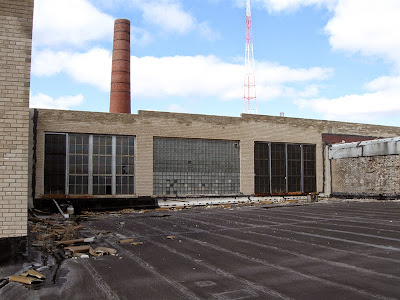 Sanders moved all of its operations into this facility in 1941, after having spent decades in various locations along Woodward Avenue, including the building I previously explored at Henry Street that was eventually purchased by Motown Records. This was where every single Sanders product was made until 1994.

Sanders soon started selling directly to national supermarket chains, as well as to other retailers in the region, but their prosperity and their status would not last forever. In 2002 local competitor Morley Candy bought out Sanders and their original recipes, and took them under their corporate wing so to speak. Today, the Sanders products are still reportedly made following Fred Sanders's strict recipes dating back to 1875, the company says. 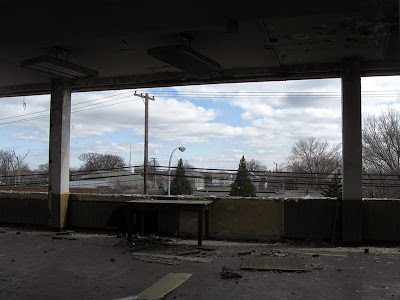 A former employee of this facility was quoted in a huffingtonpost.com article after the fire, saying that the plant even had its own commisary, with all of the items served being made in the plant itself.


In earlier times, she added, cows kept in the adjacent "Cow Palace," provided fresh milk for the confectioner's treats, though the practice stopped when city ordinances changed. "It was a little self-contained community," she said.

In its heyday, about 300 of the company's 1,000-employee workforce clocked in at the Highland Park plant...I assume that the rest were delivery drivers or worked at the stores across the metro region. Sanders only employs 200 people today, according to the article. 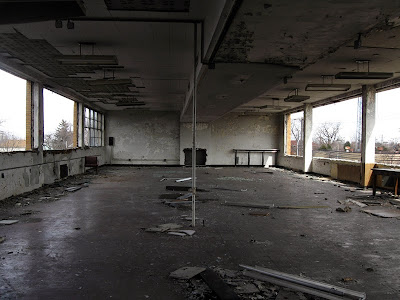 This plant was eventually sold to a company that warehoused automobile engines here until about 2003, and after that it was occupied by a recycling company, who stored stacks and stacks of pallets inside the factory space. Naturally, that was what became the main fuel of the fire that destroyed the plant.