Sitting at 2961-2965 Carpenter is the old Ukrainian Workers' Home. My Sanborn maps show it to exist as early as 1947, but it looks like it is technically in Detroit, not Hamtramck as I thought. It is just identified as a "hall" with a stage, and no further description or title. If I had to guess by the facade, I would say that this structure was built very soon after WWII ended, if not the late 1930s. The interior however looks more 1920s. 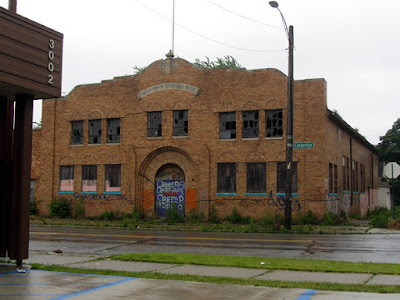 According to a thread on the atdetroit.net discussion forum, user "Hectop99," a former patron of this establishment said that this old hall had meeting rooms, a stage, a bar, and even served as a concert venue. Like any ethnic community hall, it served as the gathering place for Ukrainian immigrants, for both formal and casual events. Another comment on the DetroitPix website says that the Workers' Home "also offered support services for unemployed Ukrainians in the Great Depression," which seems to confirm my suspicion that it existed before 1947.

Hectop99 noted that the building was purchased by the Greater Detroit Hospital next-door, but they never ended up using it for anything. Since that hospital closed, the Ukrainian Workers' Home has remained empty. The thread also features a flyer from a punk rock show that was held on this stage sometime in the early 1990s, headlined by the well-known band Negative Approach. 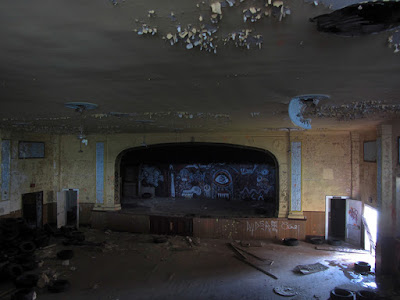 According to the book All Our Yesterdays, A Brief History of Detroit, the Ukrainians were unique among Detroit immigrant groups in that they were the only ones that did not form an identifiable ethnic enclave of their own. Instead, they mingled in with other eastern European groups in Hamtramck and Detroit's upper East Side, such as Poles, Slovaks, Czechs, Romanians, Bulgarians, Croatians, Finns, Serbs, and Lithuanians. The Ukrainians were by far the largest of these groups however, numbering about 100,000 around the time of Henry Ford's $5 workday announcement.

Note that the color scheme of the walls echoes that of the Ukrainian flag: 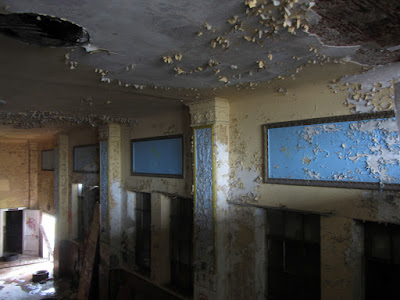 There is at least one Ukrainian family that settled on Marion Avenue in Windsor in 1921 however, on the Canadian side of the Detroit River..."The Ukrainian Restaurant" is a little-known gem of an eatery hidden in the front room of their residential house there, with some of the best stuffed peppers I have ever had. There was also a Ukrainian Hall near there on Drouillard Avenue. 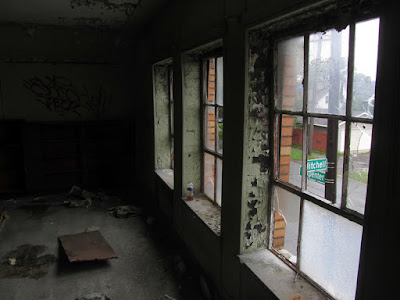 Another book by Arthur M. Woodford says that a second influx of Ukrainian expats flocked to Detroit after World War II, coming in via Canada. Most were the displaced victims of war, and political refugees. The Ukrainian population kept migrating further northeast with the onset of the "White Flight" that emptied Detroit's neighborhoods, and today their population is centered in the suburb of Warren, though many have lingered in Hamtramck. 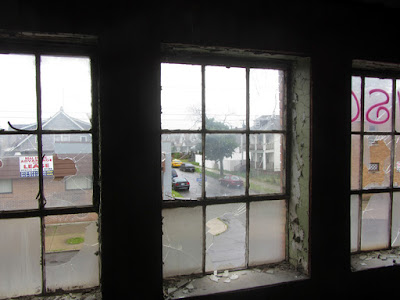 Hall of Fame Detroit Red Wings goalie Terry Sawchuk was a Ukrainian, as were a couple other Red Wing greats. He played on the team in Detroit during its "Production Line" golden era from 1949 until the late 1960s, so there is a good chance that this place was one of his haunts. This is a famous photo of him in 1966, from TIME Magazine: 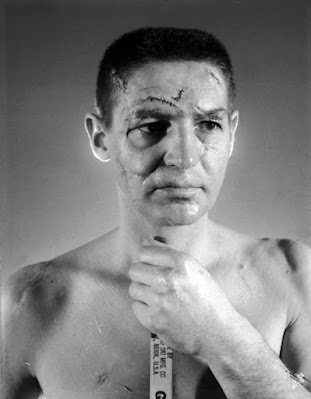 Sawchuk's is one of the elite few jerseys that have been retired to the hallowed rafters of Joe Louis Arena, where it hangs to this day. 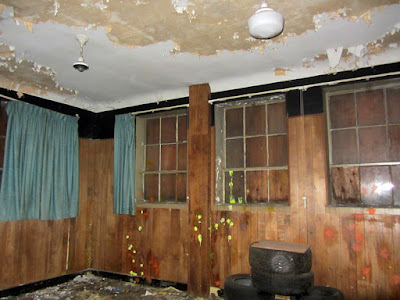 These types of halls also typically served as meeting places for organized labor (sometimes clandestinely), and I wonder if any historic union activities took place here like at the Slovak Home, or at the Polish Falcons Hall on Junction Avenue. So far I haven't turned up any such references in the couple books I have on my shelf regarding Detroit labor history, but I have read an article that says the The Black Legion (a violent Detroit-based splinter group of the KKK) once bombed the Ukrainian Educational Society Hall, probably due to suspicions of communist activity.

This building is still in good shape, and despite a widening hole in the roof it could be saved without too much effort. The sights and smells I discovered during my brief visit told me that people were living in here for the time being, but vandalism was at a minimum as compared to many similar spots. Here is the front door, with its transom window still intact: 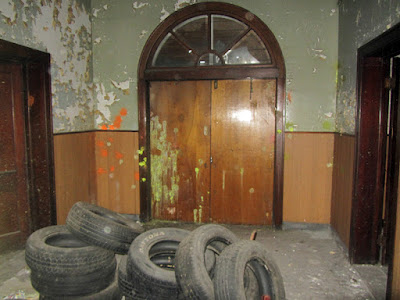 I have to wonder with all the trouble that is going on in Ukraine right now and with how many are trying to escape the turmoil, whether there might not be another Ukrainian immigrant influx to Detroit on the horizon. Perhaps this old hall has a future yet...? 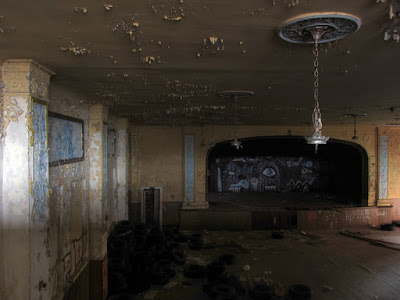 I wrote about another of Detroit's historic ethnic halls, the Finnish Workers' Society Hall, in a different post on this website.