The abandoned Duluth, South Shore & Atlantic Railroad Ore Dock (also known as the Marquette Lower Harbor Iron Ore Dock) is one of Marquette, Michigan's most recognizable landmarks. This photo I shot in 2005 shows an old stone building along South Lakeshore Boulevard and the massive ore dock extending out into the harbor behind it: 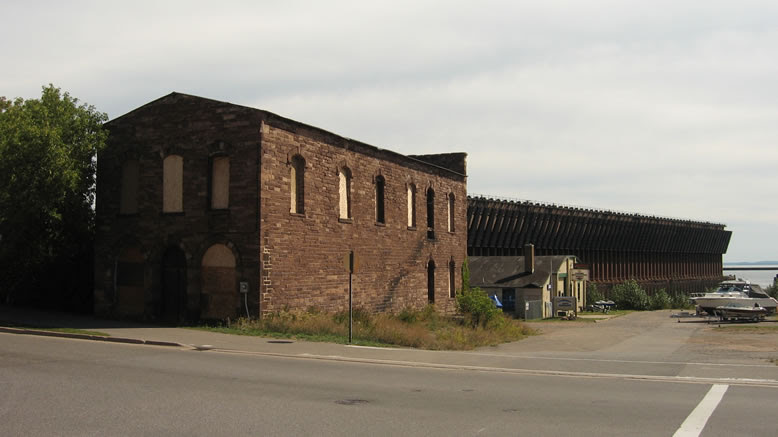 The ore dock was built simply to provide an expedient way to dump iron ore brought from the nearby mining ranges out of train cars and into freighters, for shipping to other ports. Trains went up on top of the dock and dispensed the iron ore through chutes down into the waiting ships below. 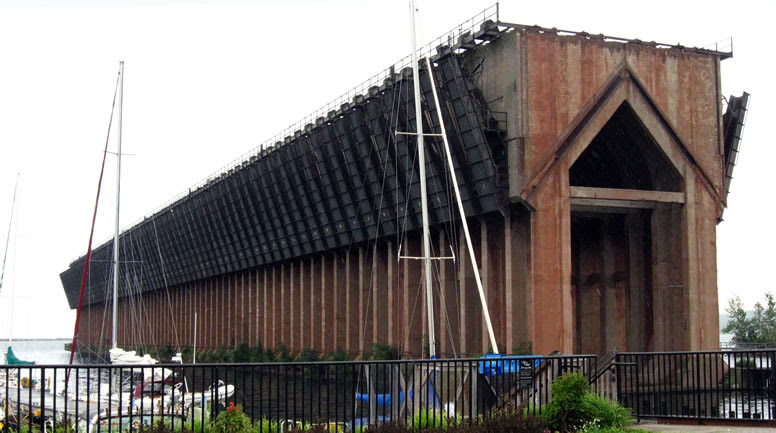 With the exception of the blind, anyone who's ever been to Marquette has seen it. Naturally I've wanted to climb all over it ever since my first visit to town, but because it is separated from land by a narrow stretch of water, getting to it can be a bit of a challenge... 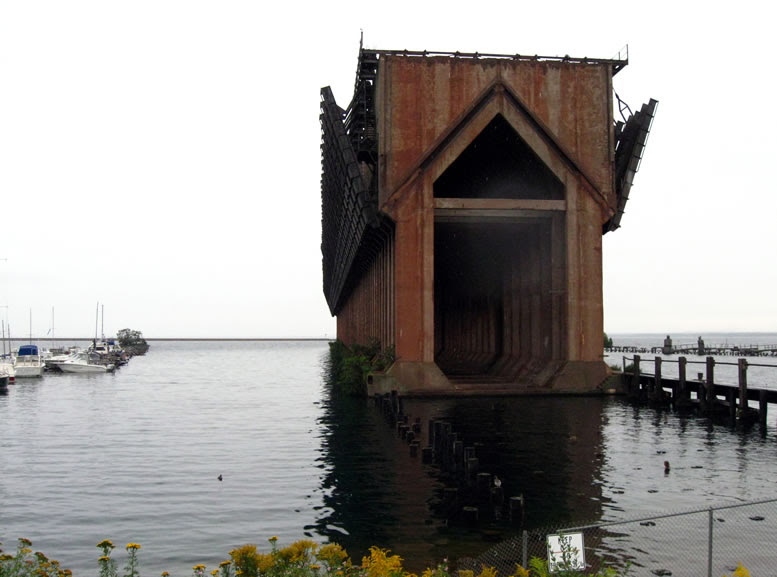 ...the approach trestle (ramp where the train cars would be able to go up onto the top of the dock) has been removed. A Google Streetview along Lakeshore Drive shows the sandstone ruins of the grade incline that would have brought the railroad tracks up to the level of the ore dock. Another view from Front Street shows more ruins of the same grade one more block up from the harbor, abutting an existing building.

Viewed from the harbor breakwater, the ore dock dominates the city skyline: 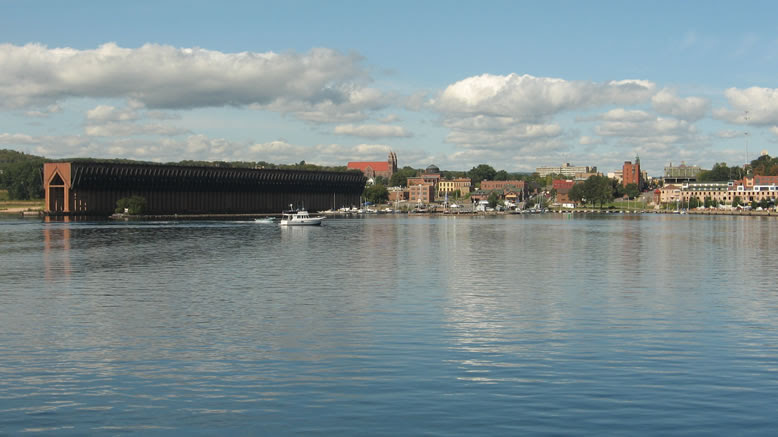 On a wintertime trip up to see the girlfriend's folks in the Keweenaw, I decided that the moment might finally be ripe for me to try my hand at the ore dock by going across the ice. Wind-chills were in the -20F to -30F range that morning, so my loins needed a little more girding than usual. 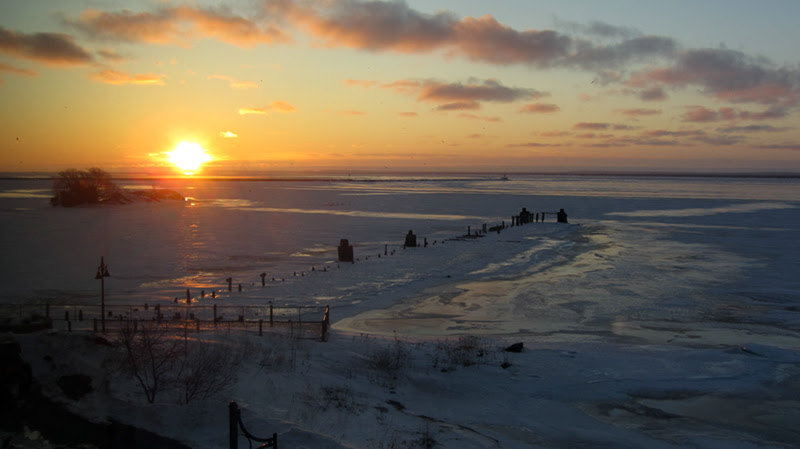 My face was already painfully cold by the time I set foot on the ice itself, and my eyes were well on their way to filling up with tears from the dry, bitter winds sweeping in off of mighty Lake Superior's frozen expanses. I could already tell this was going to be a quick trip. 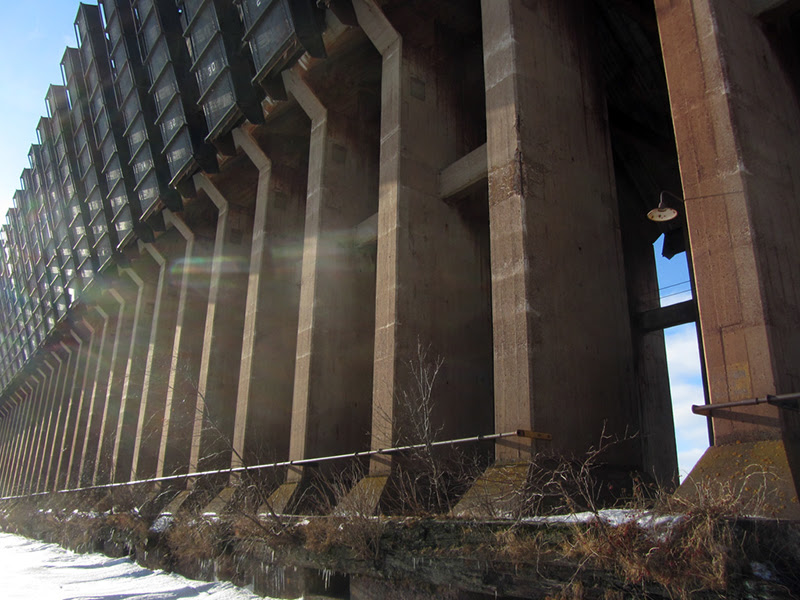 According to the Historic American Engineering Record (HAER), this titanic structure was built for the Duluth, South Shore & Atlantic Railroad (DSS&A) from 1931 to 1932 to replace an older dock of timber construction that dated to 1905. A blurb on the city's website says that from that time until it closed, this dock dished out a total of 24 million tons of ore to be sent from Marquette Harbor to steel mills in the lower lakes. 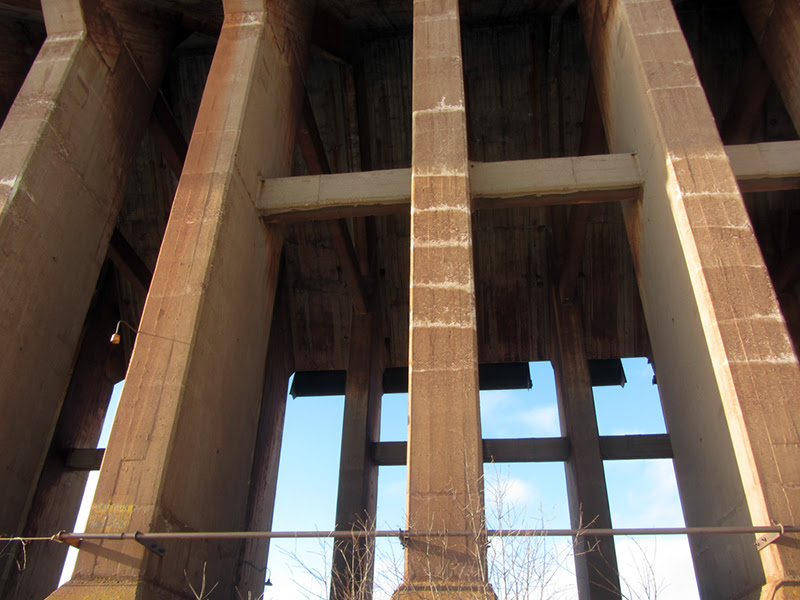 Since this structure is railroad-related there was of course the guarantee that there was at least one heavily-researched website dedicated solely to presenting every minute detail of that railroad's history for my absorption, and dssa.habitant.org was it. But in a nutshell,


The Duluth, South Shore, and Atlantic (DSS&A) was not a giant among American or Canadian railways. Its routes and mileage were modest, its profits marginal, and its history short. However, for a brief period it was the railway that served almost the entire Upper Peninsula of Michigan, including the booming copper and iron mining regions. It stretched from Duluth, Minnesota, through Wisconsin, to Sault St. Marie, Michigan, with branches running to Calumet and to St. Ignace. The communities along its lines depended upon it for their commerce and existence. It was the lifeline of the north country. For many residents there was comfort in the sound of the DSS&A locomotive's whistle heard in the middle of a long winter's night. One felt connected to the outside world knowing that you could ride the DSS&A and connect to other railways that went to Chicago, Detroit, Montréal, and beyond. 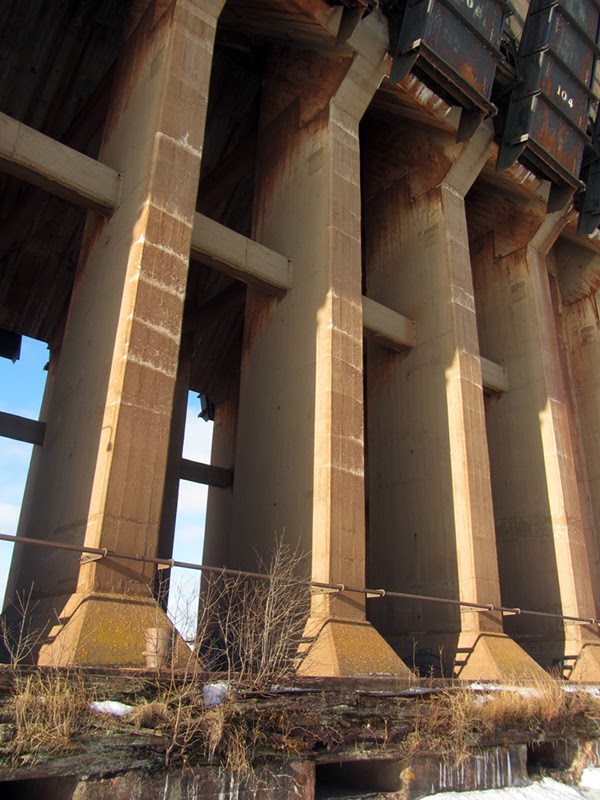 The website also lists a collection of not-so-endearing nicknames that the railroad earned itself over the years, my favorite of which was "Damned Sight Slower than Any." Other good ones were "Delayed, Short-Steamed and Antiquated," and "Damned Small Salary Always," but it seems the most commonly-heard one was "Damn Slow Service and Abuse."

It is not said why this particular railroad garnered such seemingly widespread animosity amongst employees and passengers...perhaps it really was that slow? I think it's probably just an expression of Yooperly love though. 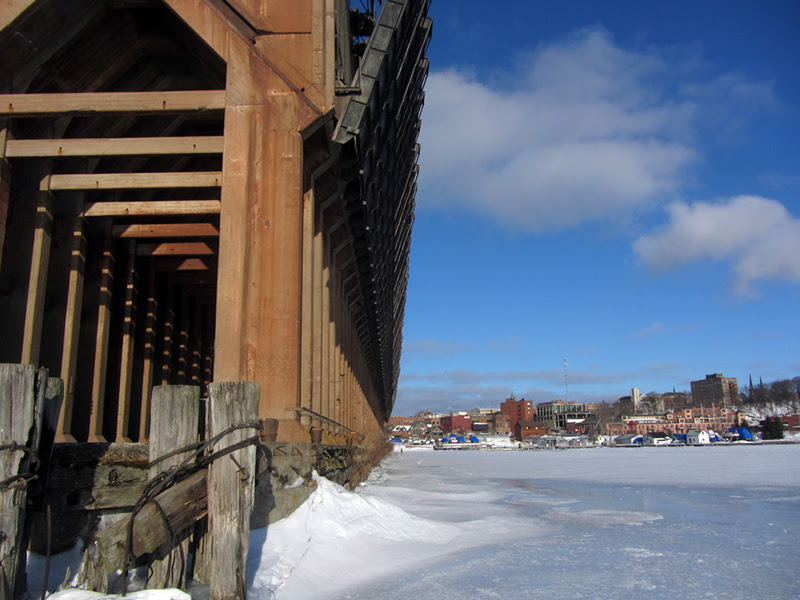 Here is a view looking back at the town of Marquette, with the ore dock looming massively, almost dwarfing it: 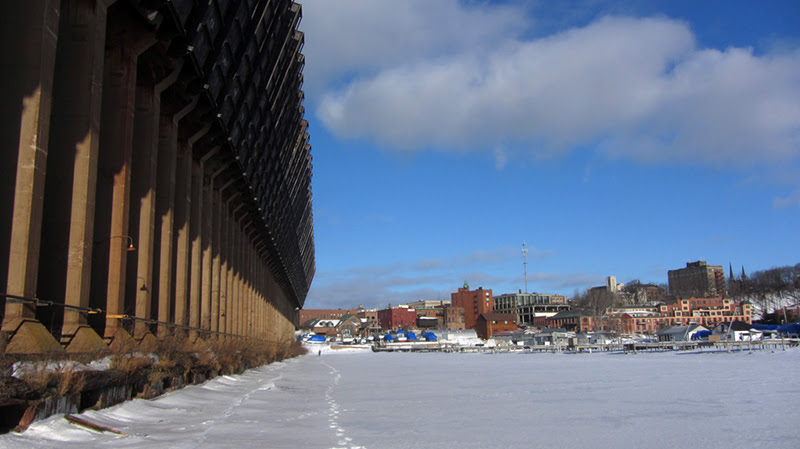 This is the business end, the furthest point from land: 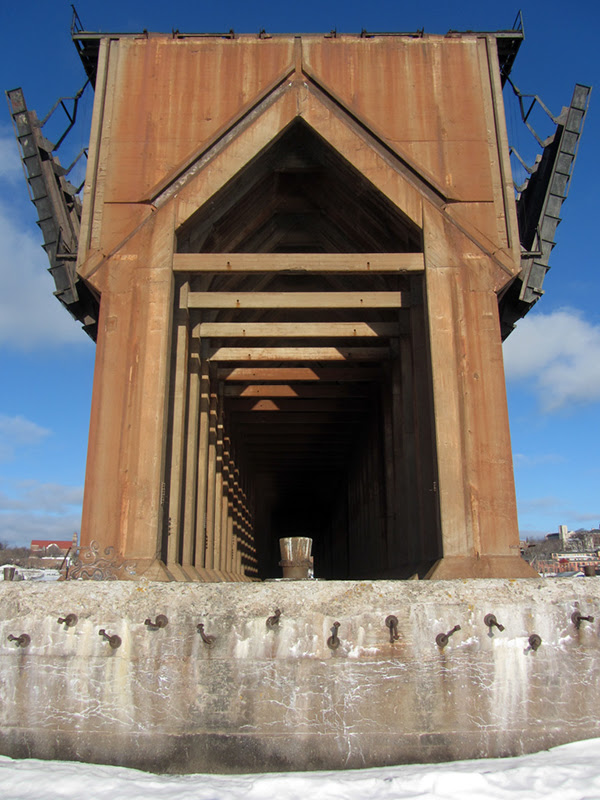 As it would turn out the DSS&A Railroad went bankrupt about five years after they completed this ore dock, and the dock was subsequently operated by other railroads including the Soo Line, Wisconsin Central, and Canadian National. 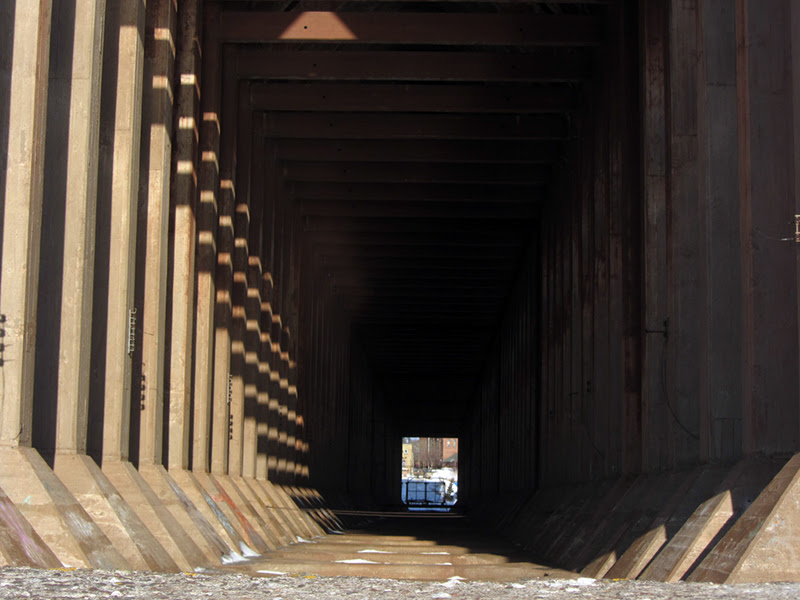 The dock dropped its last nugget of Michigan iron ore on December 31, 1971, meaning that about half of the population of Marquette can't remember a time when it wasn't a ruin. So I guess you could say that this is "the Packard Plant of Marquette," the huge abandoned albatross around its neck that no one seems to know what to do with. 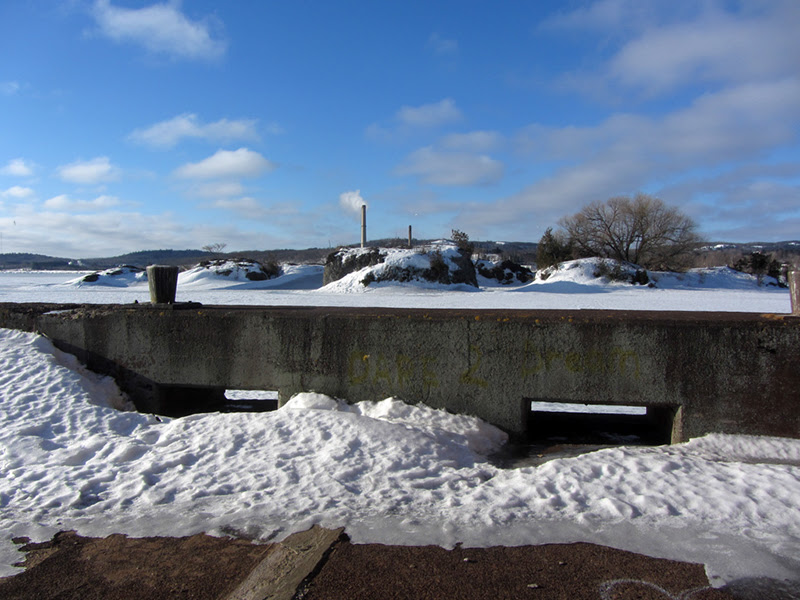 Another almost identical ore dock still functions to this day in Marquette's Upper Harbor, having continually served trains along the Lake Superior & Ishpeming Railroad from the Empire and Tilden Mines near Negaunee since 1897--it was the first one ever built, though it was rebuilt in 1911. 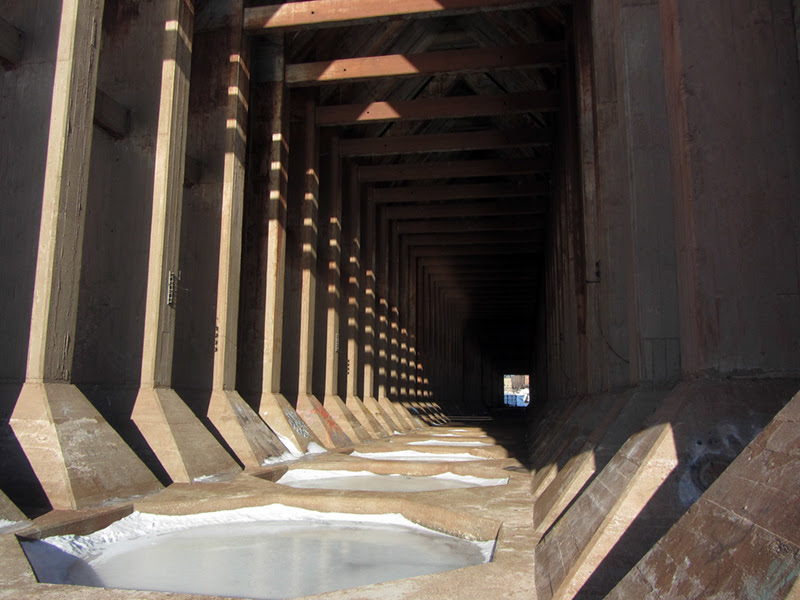 Sadly my face and hands were in such searing, stabbing pain by this point from the crippling wind chills that I had to start heading back instead of hanging out and taking more photos; it's not like I could really operate a camera with completely unresponsive fingers or teared-up eyes anyway. 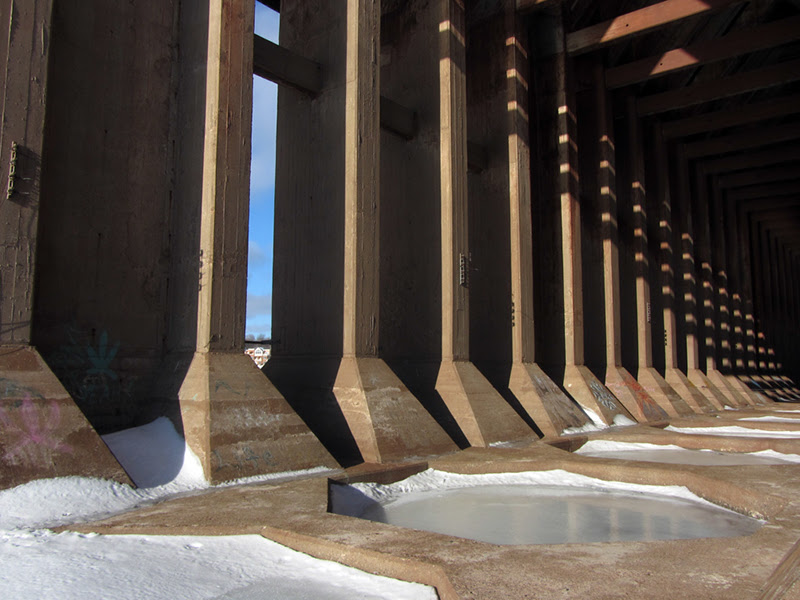 It was infuriating that after having waited so long for the chance to explore this beast that I was being turned back by this. Despite the fact that I was wearing full-body Carhartts and everything else, there was just no defying Mother Nature or the Ice-Water Mansion today.

I was also dismayed at the fact that there seemed to be no way to get up on top of the damned thing...no ladders or anything. Oh well. 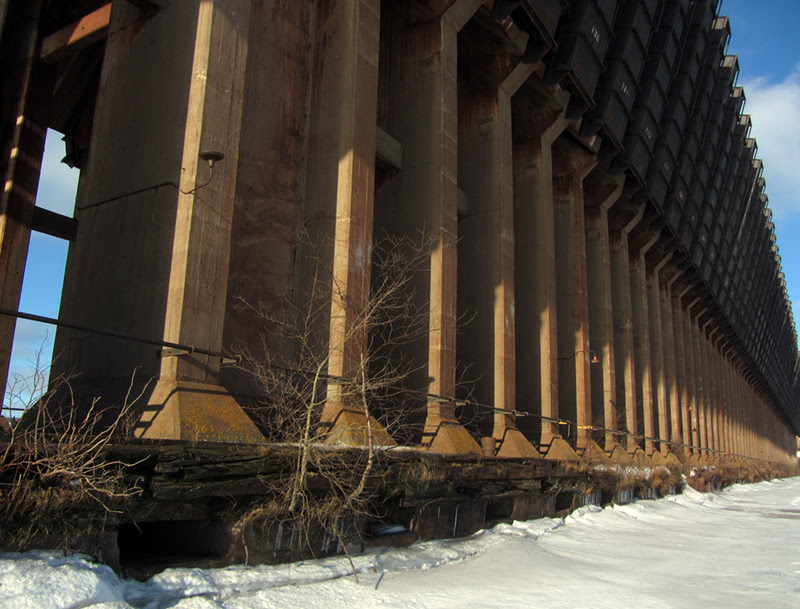 The City of Marquette seems to have some interest in preserving the dock as a landmark instead of demonizing it as an "eyesore," or an inconvenient reminder of their industrial past. It is worth noting that the city's 4th of July fireworks display is launched from it as well. 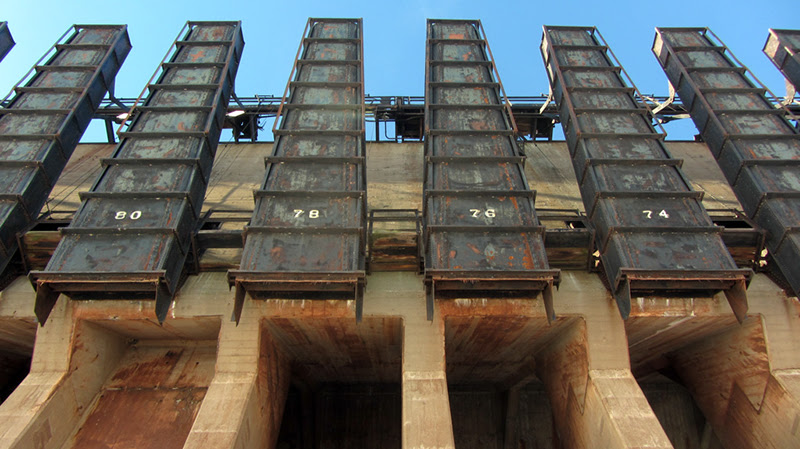 Soon after my visit, the city's contracted consultants put out a feasibility study on redeveloping the ore dock for a variety of potential uses.