Tales From the Crypt

At 1230 Washington Boulevard in downtown Detroit stands the diminutive St. Aloysius Parish (pronounced "allo-ISH-us"). The first church was built in 1860 by Presbyterians, and it was bought by the Detroit Archdiocese in 1873. It served as the Cathedral of Detroit from 1877 to 1890, but it was torn down in the spring of 1930 so that this more modern church could be built in its place. The facade was carved mainly by Corrado Parducci, with figures of the 12 Apostles carved by Samuel Cashwan:

I believe that while I was there I heard the pastor say that part of the old c.1860 church was left intact as part of the new structure, but I'm not sure now. It butts directly up against the Washington Apartments tower on one side, and the Chancery Building on the other (which is the headquarters of the Detroit Archdiocese), built in 1924. The new St. Aloysius Church building was designed to visually compliment the neighboring Chancery.

The church was designed by Walter R. Meier of the firm of Donaldson & Meier, while the eight-story Chancery Building was designed by John Donaldson of Donaldson & Meier. Their firm was also responsible for designing many other churches in Detroit such as First Unitarian, Most Holy Redeemer, St. Agnes, St. Margaret Mary, St. Hyacinth, St. Anthony Church and school, and the Sacred Heart Seminary, as well as the David Stott Building (which happens to loom behind St. Aloysius from several blocks away).

The unique interior of St. A's features a three-level seating arrangement that allows the entire congregation to see the priest officiating at the main altar on the middle level, or follow along with the deacons at the altar on the lower, or "undercroft" level. Each sanctuary level can be used separately if needed, but Meier took great care to ensure that every seat in the church on every level had a view of the main altar however. 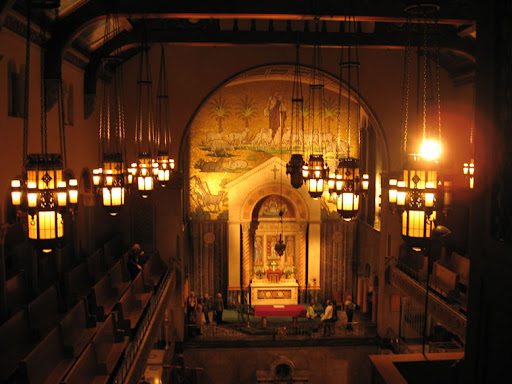 The idea for the extremely unique three-level design was inspired by the Cathedral of Milan, Italy, and was done in this way so as to maximize the seating capacity on this tiny lot. The original church seated a mere 728, while the present church seats 1,500 (another source cites 2,100--plus room for another 500 portable chairs).

A look into the undercroft from the railing of the main level:

The altars from the c.1860 Presbyterian church were reportedly kept, and are still used in the undercroft sanctuary: 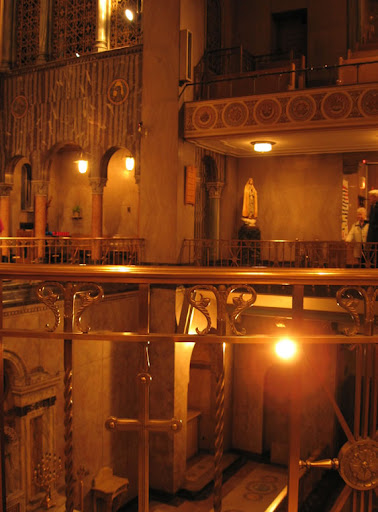 The mosaics were done by Hildreth Meiere of the Ravenna Mosaic Company...the one in the arch over the main altar depicts St. Aloysius on his deathbed.

The altar itself was built by contractors from Michigan's Upper Peninsula, according to what I heard the pastor say:

The church's interior features 26 types of marble, only three of which were quarried in America.

I decided to hit the stairs and see the upper balcony level. The slit windows in the stairwell were tinted an odd, vivid blue. 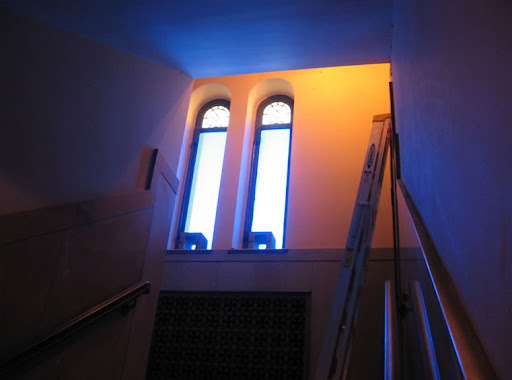 The Book Building looms across the street:

The aisleway along the back wall of the balcony section:

Being up here really illustrates how big of a space is contained in this little church.

It was also when I realized that this was probably the first and only church I'd ever been in that had no windows along its sides--that of course owing to the fact that the building butted directly up to the sides of its neighbors.

Well, I suppose that last photo shows that there are a few small stained glass windows up high in the clerestory.

This new tracker-action pipe organ was built and installed by Gabriel Kney in 1973, and several pews had to be taken out to accommodate it:

Behind the pipe organ was the rosette window that faced out onto Washington Boulevard:

St. A's was named after St. Aloysius Gonzaga, an Italian prince born in 1568 AD, who renounced his title and joined the Jesuit order to serve the homeless, and the plague victims of Rome. He died at age 23 of the plague as a result of his avocation.

Known as "Everybody's Church," St. A's is unique in the city as being the only parish that was not founded by a specific ethnic group--it was merely built to serve the residents and office workers of Detroit's downtown, and its homeless population.

Just as downtown is considered a place for everyone in the city to gather, so too does St. A's belong to everyone.

Easy to miss are the decoratively carved ceiling trusses--the visitor's eye is drawn downward at St. A's--not upward, as in every other church.

Pewabic tiles adorn the outline of this arched doorway:

This view from the front of the sanctuary really shows the depth of the three levels, which I had an especially hard time doing without my old wide-angle SLR 35mm camera:

I returned to the stairs for a trip down to see the undercroft level.

The pastor was talking about the fact that the church was equipped with a "state of the art" 1920s era form of "air conditioning", which basically consisted of using a large fan system to circulate air through coils that are fed by constant freshwater from the city water system. This setup worked ok, and in fact it is what they still operate at St. Aloysius today, but you can imagine it tends to produce rather large water bills, heh.

So when I heard him mention that they had taken the system out of service for upgrades, my ears perked up. If people are working on it, could this mean that I might have easier access to snoop about in the church's lower levels, and thus learn more of its eldritch secrets... I made a beeline for the stairs, but once I got down to the undercroft level I realized I had to switch to the other stairwell.

The area to the rear of the undercroft extends 15 feet out underneath the Washington Avenue sidewalk, and contains both a crypt and a baptistery.

In that area I found some stairs that led deep below the church, so I decided to investigate...

I recall going down several contiguous flights, putting me probably the equivalent of three or four stories below ground, since the undercroft itself is technically a basement level.

I could tell by the lack of loud noise that all the aforementioned machinery was indeed shut down.

Nonetheless I was as quiet as a church mouse when I finally stepped out into an actual room of some sort, after going through a couple narrow passageways:

This was indeed the air-conditioning system that the pastor had talked about.

Thanks to his explanation of the air-cooling system still fresh in my mind, I knew exactly what I was looking at. The placard says that it was built by American Blower Corp., whose plant on Rivard Street I had once roofed:

Nobody seemed to be around, so I took a few photos at my leisure.

There is a large vent shutter seen on the wall to the right:

I assume this is where the water was pulled from or returned after cycling through:

My excitement built as I scanned around and found what looked to be...

At long last, had I finally wormed my way into one of the many steam service tunnels that crisscross underneath all of downtown Detroit?

Before taking the plunge into the blackness, I noticed these ancient-looking votives sitting stashed in a little cubby off to the side, and did my best to take a blurry picture of them in the dark:

I wonder if they too were saved from the c.1860 church building? I don't suppose the Presbyterians used votives, but the Archdiocese undoubtedly had some here when they bought it in 1873.

I continued on by flashlight, up some stairs in the darkness:

This reminded me so much of the ventilation tunnels below the Packard Plant...

...because that's exactly what they were--no steam service here. Somehow I had ended up in the crawlspace below the undercroft. The little rectangular openings in the ceiling in the above photo are actually the cold air return grates in the floor of the undercroft sanctuary; I could hear people walking around above me.

I kept exploring further but to no avail. This was just a bad lead.

Oh well, back to the drawing board. Ite Missa Est.