My original fascination with Montmorency County in northeast Michigan started when I learned that it had the highest forest cover percentage and the lowest population density of any county in the Lower Peninsula. The population of its largest village is 800, it is the elk capitol of Michigan, and is as close to "mountainous" as you can get in the Mitten.

According to David M. Brown's Michigan County Atlas, Montmorency County was set off in 1840 and was first named Cheonoquet County, which meant "Big Cloud," after an Ojibwe chief. It was renamed in 1843 after Count Montmorenci, who aided the 13 Colonies in the Revolutionary War, and was finally organized in 1881 when the logging boom began. Montmorency County was logged out from about 1880 to about 1910, Brown says. "Prosperous logging towns sprang up, and a vast network of logging railroads stretched throughout." 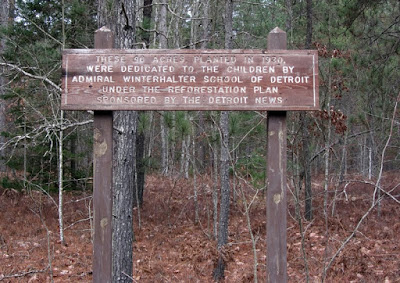 After the lumber boom ended population growth came to a halt. By 1930 there was only a mere 3,000 people in this hilly, cut-over wasteland, and it still remains one of the most sparsely populated areas of Michigan to this day. The book Michigan Ghost Towns of the Lower Peninsula by Roy L. Dodge shows the population of the county jumping from 845 people in 1884 up to 4,089 people by 1920, but still only 4,424 people by 1960. Montmorency County had a little bit of a resurgence as a popular place for cottagers, recreational fishermen, and hunters in the latter half of the last century, and the population in the 2000 Census reached 10,315. 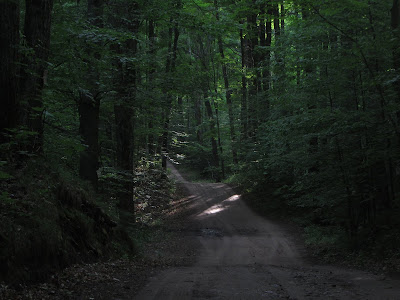 One third of the county is state land according to Dodge (which might account for its popularity with deer hunters), and there are 126 lakes. There was a devastating outbreak of bovine tuberculosis in the 1980s or 1990s if I recall correctly, which scared away all the hunters, but I am here to tell you that the herd's recovery since that time has been gangbusters. It was where I shot my first deer, and it tasted better than any other I've ever had.

On my way to go "kill Bambi" I stopped to look for any last remains of the former Camp Lunden of the Civilian Conservation Corps. The most notable thing about it is this whimsical miniature version of the Great Lakes: 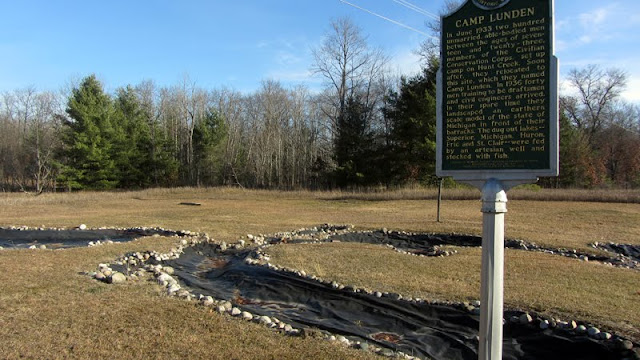 The Civilian Conservation Corps (CCC) was a federal government initiative to provide work for the millions of unemployed men during the Great Depression while improving the nation's natural resources, and 103 such work camps were built all over Michigan by 1935. A webpage from Michigan State University goes into more detail on the CCC's legacy in this state.

According to the state historical plaque, Camp Lunden was opened a mere three months after President Franklin D. Roosevelt formed the CCC by executive order. In the beginning it was a force of 200 "unmarried able-bodied men" between the ages of 17 and 23, and they set up camp on Hunt Creek in June 1933. They relocated to this site soon afterward, which they named Camp Lunden, apparently after a Mr. Herman Lunden, who "had been active in conservation in his native Sweden where the terrain was very similar to that of Michigan," according to The Lewiston Story by Roberta Hanna. Mr. Lunden was actually a manager for the Kneeland-Bigelow Lumber Co. in Bay City but he was also a conservationist. His papers are held by the University of Michigan Bentley Library.

The men still lived in tents until they built permanent barracks and a mess hall for themselves, as well as other structures. The CCC men of Montmorency County planted trees, built roads, and dug fire lines to protect the newly re-planted forests. They created trout ponds, and cut a swath out of the forest to build the county airport. Because their primary mission was reforestation, the CCC acquired the nickname of "Roosevelt's Tree Army."

Life for the men at camp included "socializing" in Lewiston, boxing, and giving musical performances...so basically it sounds like they lived the life of a lumberjack until the Great Depression was over. Around the time Camp Lunden closed in 1936, another 40 men training to be draftsmen and civil engineers arrived. In their spare time they created the scale model of the Great Lakes (seen above) in front of the now-demolished barracks. The dug-out lakes were originally fed by an artesian well and stocked with fish, according to the plaque. Now dry, they are the only remnant of Camp Lunden, and are big enough to be seen from the air: 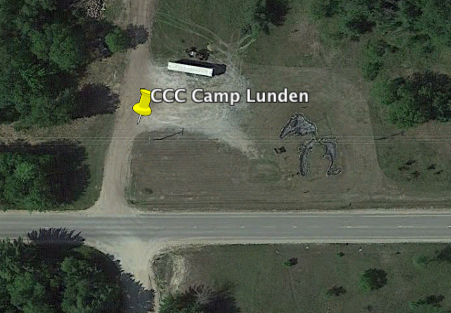 Convinced that there surely must be something left of the camp, perhaps a foundation or two, I went searching through the woods on foot. After 15 minutes or so it became pretty evident that the area had been heavily altered, and any structures that once stood were long gone.

This was all I could find--a couple pieces of rubble that were made up of cobblestones mortared together, one of the favorite building materials of the CCC and Works Progress Administration era: 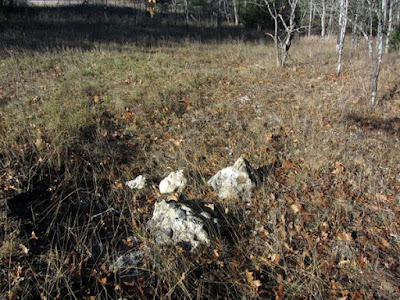 Were they pieces of the demolished barracks or mess hall?

Another abandoned location in Montmorency County is the ghost town of Big Rock (not to be confused with the ghost town of Big Cut in nearby Presque Isle County). A few foundations are still visible, as well as the "big rock"...I found that to be rather intriguing, so off I went. There is actually a state historical plaque here, and the grass is kept mowed: 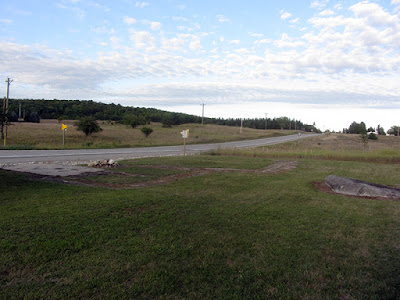 Big Rock was one of the first white settlements in the county, originally started by two German immigrants, Charles Meyer and August Barger. According to David M. Brown it was later organized by William H. Remington who started a general store and post office here under that name, but it was renamed Big Rock in 1885, paying tribute to the massive granite boulder that was sitting in the midst of town. Likely pushed down from Canada in prehistoric times by a glacier, 90% of its mass is hidden below ground Brown says, much like an iceberg. 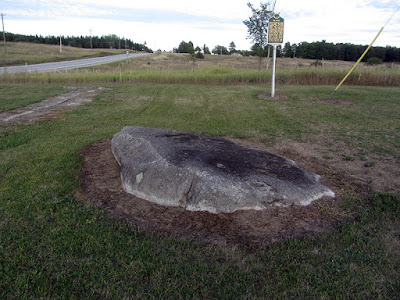 Roy L. Dodge says that the Big Rock "has an impression that appears to be a human footprint, perhaps that of an Indian wearing a moccasin." The stone sits right next to state highway M-32, and many of our state trunklines were built along the paths of former Indian trails, so I think there is a certain romance to this moccasin-print-in-stone notion. I'm not sure where that legend might have come from, but I'd like to think that this might have once also been a landmark along an ancient wilderness route used by aboriginal people who also thought it looked like a footprint, signifying the presence of ancestors: 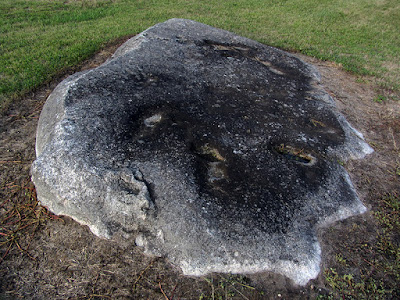 Big Rock's population peaked around the year 1910, and by 1917 it was still a hamlet of 100 people according to Dodge; and I imagine it declined steadily from there, with the post office closing in 1920. Big Rock's structures once included a general store, meat market, sawmill, Congregational church, school, grange hall, machine shop, and several houses. Only the church and the boulder remain.

The still-operating church's steeple is barely seen here at upper left, in the trees at the top of the hill: 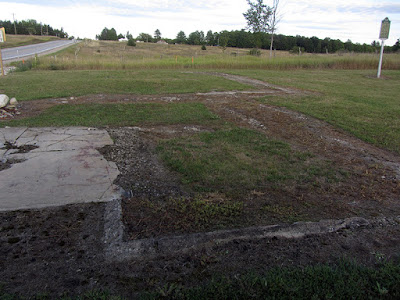 According to another wooden sign nearby, this foundation outline is where William Remington's general store stood, built around 1882. 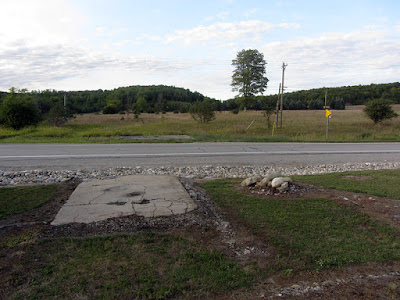 It also had living quarters, and later served as a gas station as well, once the horseless carriage made its way into the northlands.

I think this flat cement pad may have been where the gas pump was...a crack in it shows cobblestones mixed in, which--like the rubble I found at Camp Lunden--probably points to 1930s construction: 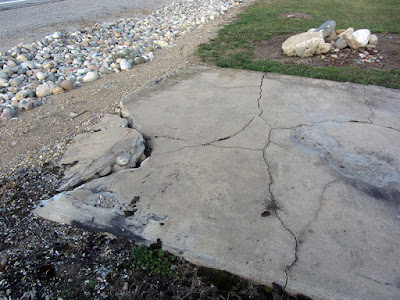 I imagine that this gas pump kept Big Rock "on the map" so to speak well into the 20th century, since its being situated on a major state road connecting the cities of Gaylord and Alpena--with little in between--made it something of an oasis to the deep-woods motorist or local farmer. According to the wooden sign (which must have been erected by a local historical society), this store was owned by three other families after the Remingtons: the Harrisons, Daschs, and Johnsons.

According to author Larry Wakefield, store owner Charles Harrison supposedly tried to dig up the big rock and put it on display in 1940, but only succeeded in digging a tunnel under it. The store finally burned down in 1966, which I imagine was the end of Big Rock. Behind the store's footprint was a raised berm with rocks spelling out "BIG ROCK": 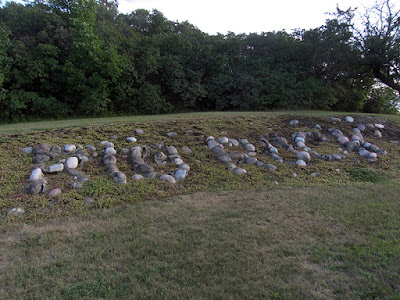 From the top of the berm looking down on the store and the big rock, I could see yet another foundation on the other side of M-32: 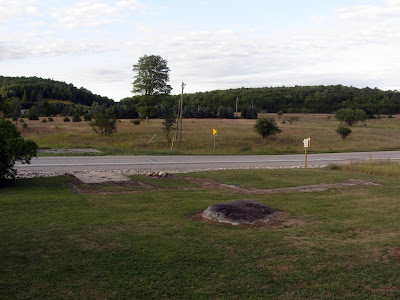 I crossed the road to go investigate... 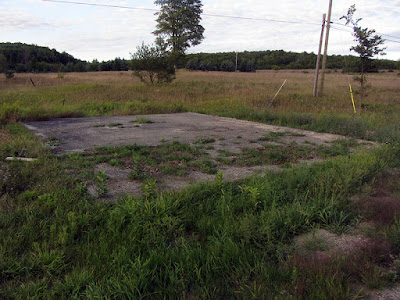 The back corner was exposed and seemed to be made of piled brick under the concrete pad, though it is hard to see here: 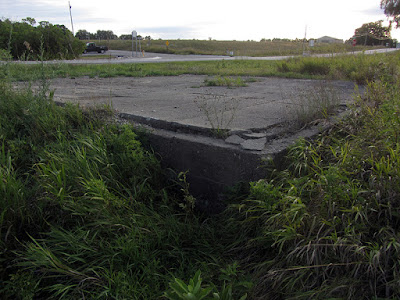 There was nothing else of note to be found in the immediate area. During the entire time I was quietly walking around here at Big Rock, a total of maybe two or three cars passed by on the highway...and none of them stop anymore. 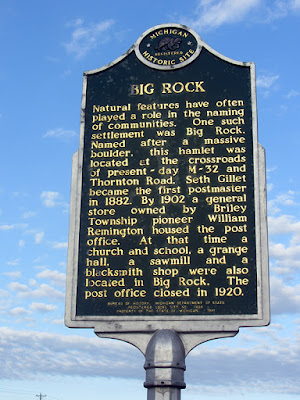 *Note:
The Admiral Winterhalter School mentioned on the sign in the first photograph was based in the former mansion of Admiral Albert G. Winterhalter, on West Jefferson Avenue in Detroit near Fort Wayne, where the Flor-Dri company building stands today. It was established in 1919 by the school board as an early form of "special education," and housed a small group of "incorrigible" boys that were classroom misfits and who needed a special setting. A permanent home for the Winterhalter School was built in 1921 at 12121 Broadstreet.