On Lawton Avenue, in the dried up barrens behind the Edmunds & Jones plant (discussed in an older post), are some ruins just north of the train tracks that I always noticed while driving this stretch of road. 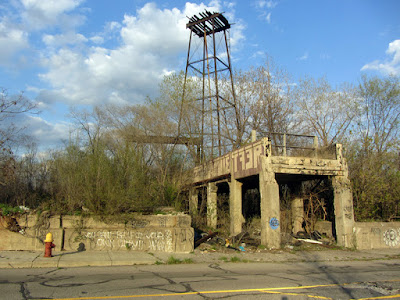 You can barely see them in this aerial image, buried in the trees at extreme right: 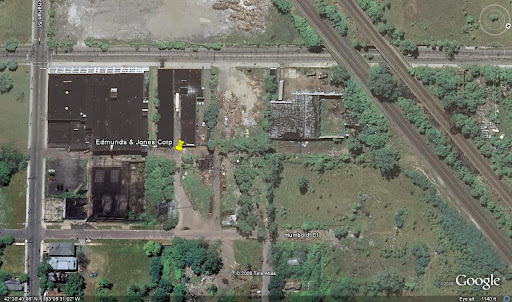 According to the Sanborn maps, these ruins belonged to the plant of the Northway Motor & Manufacturing Co. A postcard image from the Detroit Public Library Digital Collections shows the plant in its glory:

Walking northbound on Lawton from the Edmunds & Jones plant, one can see Lee Plaza looming directly ahead. There is also a couple of Detroit's classic 100-year-old wooden light poles: 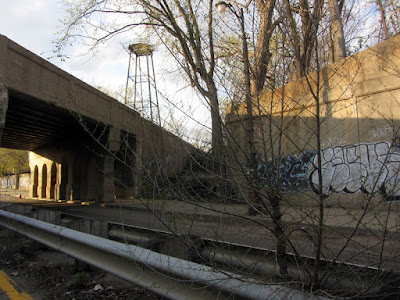 I presume this structure is a severed old railroad spur viaduct that once served the Northway Plant, and behind it stands the skeleton of an old watertower: 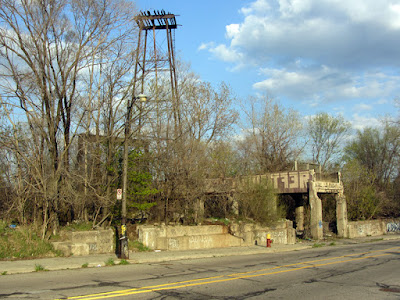 Northway existed from 1903 to 1924 and made engines for Auburn, Buick, Ford, Oakland, and Oldsmobile cars, as well as GMC trucks. They were bought by General Motors in 1909, becoming the Northway Motor Division. I believe the founder, Ralph E. Northway, had moved to Natick, Massachusetts to continue as the Northway Motors Corp., but didn't get very far before calling it quits. One of its general managers, A.M. Knoblock, was also briefly a minister at East Grand Boulevard Methodist Church.

The Hayes Manufacturing Co. also existed immediately adjacent to Northway on the west side of Lawton Avenue, stamping automobile bodies and related work. 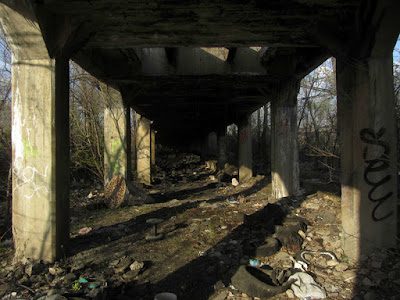 The Northway Motor Division of GM was disbanded in 1926, at which time this plant became the Chevrolet Gear & Axle Division plant. Most of this plant was of the old mill-style brick and timber construction as opposed to the standard Detroit Kahn-style fireproof design. 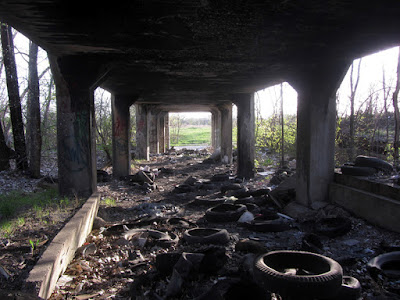 On March 12th of 1987, the vacant plant was utterly destroyed by a fire that took the lives of three firefighters and injured ten more. The plant was last occupied by Motor City Wiping Cloth Co., who abandoned it in 1983, leaving behind massive bales of rags and cloths, which homeless people naturally used to keep warm and to start small fires with. One of those small fires got out of control, and when firemen entered the structure to fight it, a flashover situation occurred that made the entire plant nearly explode.

It happened so quickly that some of those firefighters involved could not wait for rescue, and were forced to leap from the third floor windows of the plant. Others were buried in rubble when floors collapsed. The severe radiant heat and raining cinders from the Northway blaze caused the nearby Continental Paper warehouse to begin igniting as well. Within 30 minutes, the incident had escalated to five alarms, calling a total of 24 trucks to the scene. 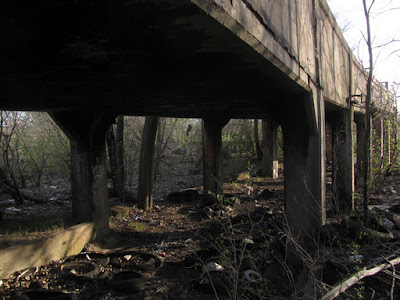 The homeless man who allegedly started the fire was sentenced to life in prison for arson and negligent homicide, but I don't think any property owners or city officials were ever held responsible for the plant being left open with such hazardous conditions present. Firefighters even reported that some of the fire doors that should have been in place between buildings to prevent such a rapid spread of the fire were in fact absent. It sounds like maybe this "homeless man" became the scapegoat while negligent property owners and city building inspectors walk free. 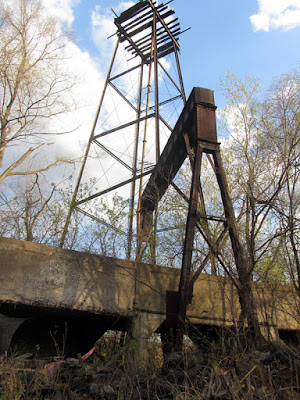 In the vacant lot where part of the Northway plant used to stand is a pile of several abandoned boats. You can even see them at the right edge of the aerial photo in the top of this post. 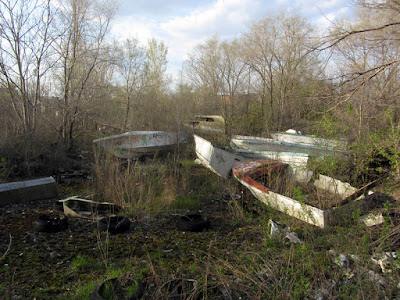 There are quite a lot of them actually. 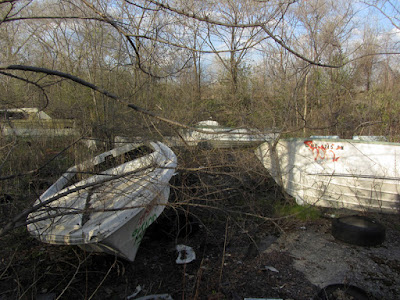 Occasional peeks through the thin carpet of the forest floor reveal a shattered concrete surface that once made up the factory floor of the plant's machine shop. 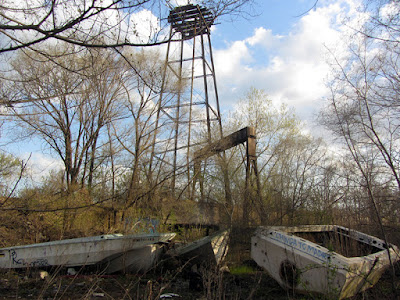 This boat is filled with water and even has a large bush growing in it: 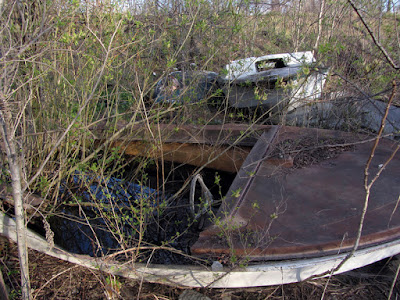 The large building looming through the trees in the next photo is the Detroit Fire Department Training Academy building I mentioned earlier... 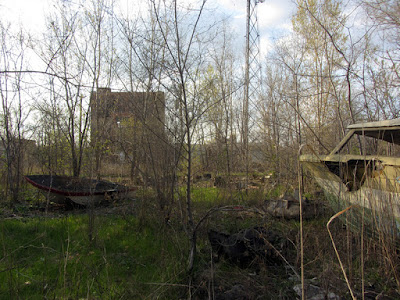 ...I imagine the fact that cadets can see the spot where such a tragedy occurred from the windows of their own training building probably has quite an impact, assuming their instructors tell them the story of what happened here. 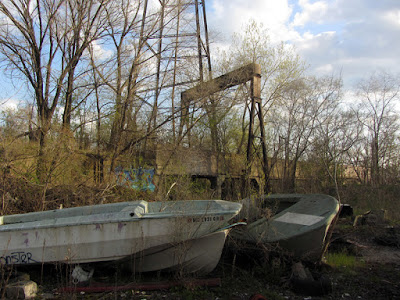 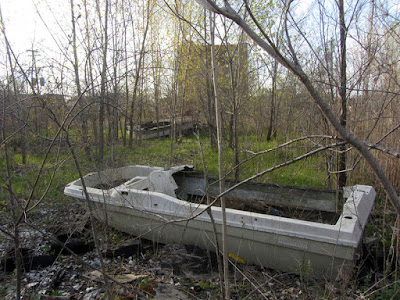 I moved toward the base of the watertower, to see if it could be climbed: 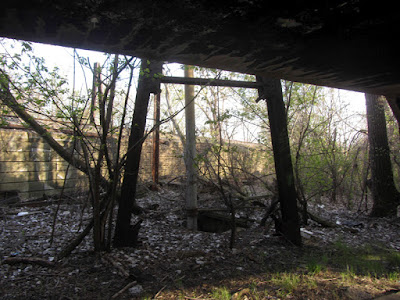 The wall on the lefthand side is the Pere Marquette Railroad grade: 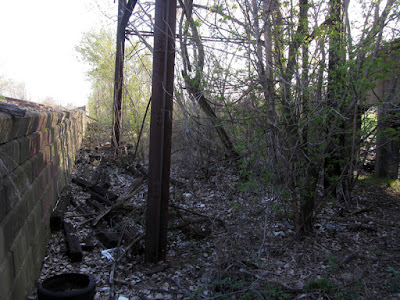 The Sanborn maps indicate that this was a gravity watertower of 60,000 gallons capacity, and according to the account of the Northway disaster, the plant's sprinkler system "was inoperative during the time of the fire" because the building was abandoned.

Even though that report was written in 1987, it makes note of the fact that due to severe population decline Detroit had a plethora of abandoned buildings, therefore implying a higher than normal potential for fire disasters. The words and the tone setting the scene in the introduction of the report seem to eerily portend the conditions that have led Detroit to become the most overburdened fire department in the nation. 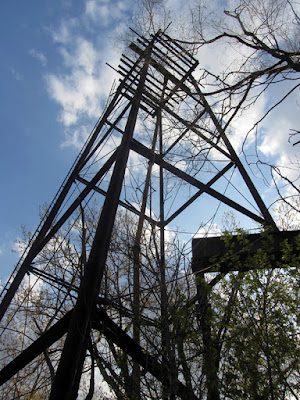 What I didn't realize when I started climbing is that the top eight feet of the ladder were not only leaned back to vertical, but was also completely unsecured from the rest of the structure, floating off in space. Look closer... 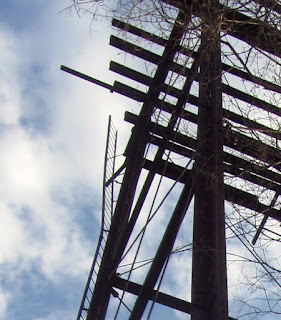 Nonetheless I shimmied up the bottom 20 feet to where the ladder started so I could begin my climb. 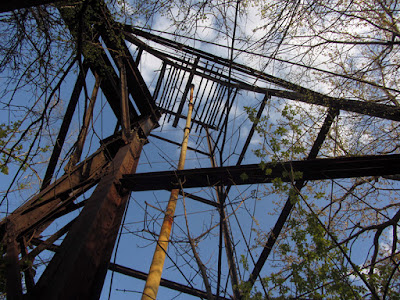 About halfway up, I could already see a terrific view of the railroad stretching northeast to New Center: 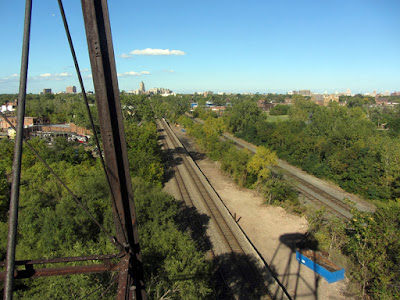 The struts on this tower were unlike the usual "X-latticed" beams I was used to seeing, and had a "+" shaped cross-section that was apparently welded in the center: 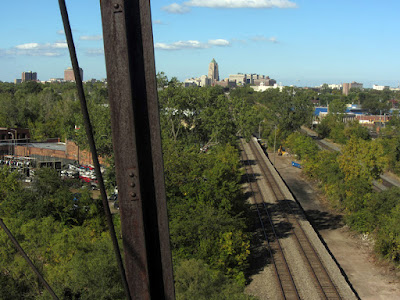 Looking back down into the jungle: 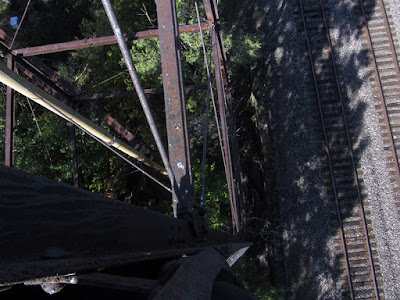 Downtown seemed to float upon a meringue of lush, green-forested neighborhoods: 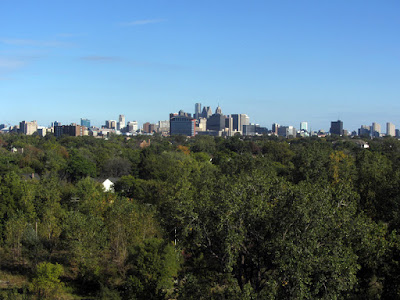 Directly to the south of me the Edmunds & Jones Plant is seen, with Michigan Central Station and the Ambassador Bridge in the distance: 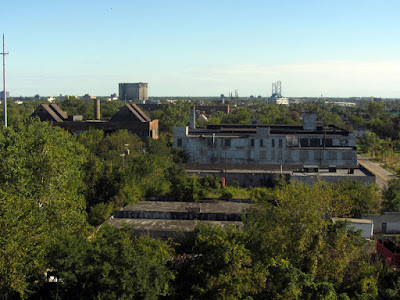 Southwest, toward Dearborn and Delray: 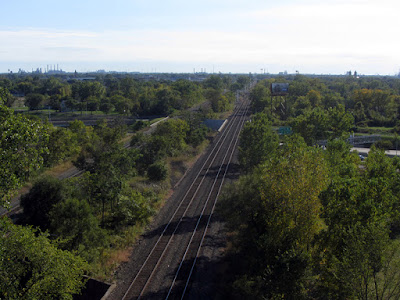 I was surprised at how sturdy the ladder was that I was climbing on...usually they're pretty shaky and broken loose in spots, but this one was solid, despite being very rusty. 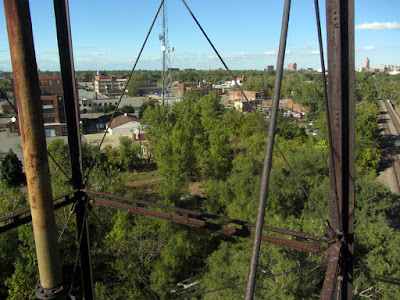 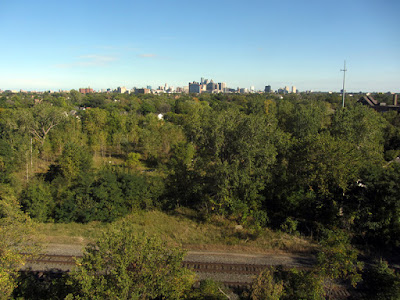 Finally I made it to the last stretch, where the ladder goes vertical and seems to lean out backwards...in other words, the scariest part of the climb: 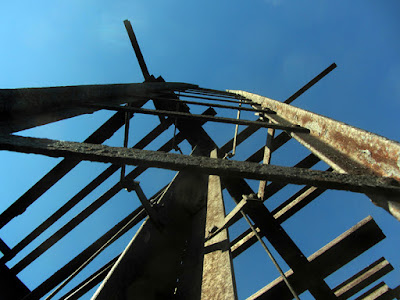 This was when I discovered that if I had any intentions of going up top to sit down that I would be obliged to do some kind of tricky maneuver involving reaching out across a two-foot gap to pull myself off of the ladder and onto the horizontal beams that once held the tank. And this was also where I realized that the last eight rungs of the ladder above this point were totally unattached to the structure, making for an increase in wobbliness that I could already feel.

Climbing back down from the platform to mount the ladder again would probably be even trickier. 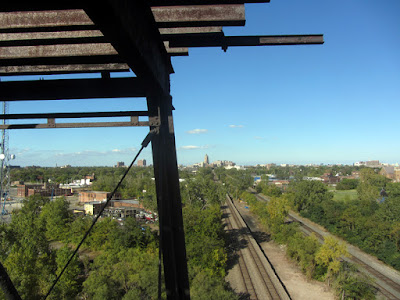 Yeah, maybe next time when I'm feeling more up to it...and not quite so sober, ha.