The Honeymoon is Over

One iconic type of ruin that can be found sprinkled across all of Michigan's northern reaches is the classic mid-century vacation cabin row, but they are disappearing from our landscape rapidly. These rows of miniature identical cabins are generally designed to be as cute as possible, and they are most often found along state trunklines or U.S. highways, since they enjoyed their greatest popularity in the days before the Interstate System was completed. 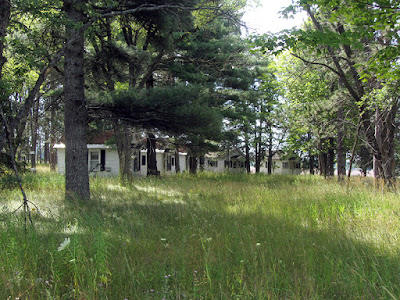 Often they are designed to resemble gingerbread houses or log cabins, and they are only big enough for two people to spend a cozy night or two, which probably made them popular with honeymooners and lovebirds. This particular cabin row is among the more modest ones in terms of style, situated along US-131 in Kalkaska County.

Closest to the road was the proprietor's residence, I presume, also apparently derelict: 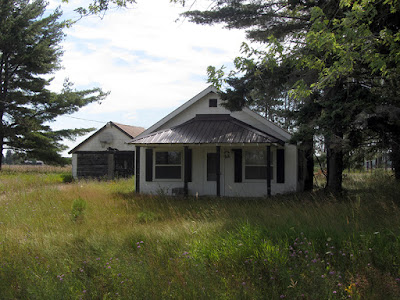 The advent of chain motels and fancier resorts, combined with changing tastes among the vacationing public, and the changing traffic patterns brought on by the Interstate highways has led to the decline of these family-operated businesses across the northland.

Many of them are still faithfully kept up however, and are still popular with both tourists and regular vacationers, but many more are seen in some state of decay, and often the proprietors see fit to just let them go, perhaps because they just are no longer profitable, or they themselves have become too elderly to keep up with the work anymore and don't have anyone to pass the business on to. 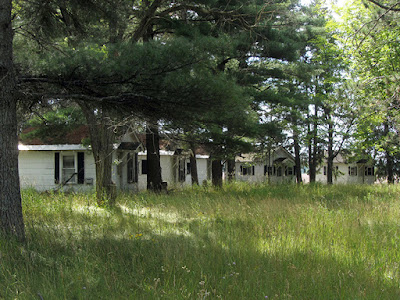 Kalkaska County was set off as Wabassee County in 1840, named after a Potwatomi chief (meaning "Swan"), according to the book Michigan Shadow Towns. It was renamed Calkaska County in 1843, then organized and renamed Kalkaska County in 1871. David M. Brown speculates that "Calkaska" was a combination of Henry R. Schoolcraft's great-grandfather's last name ("Calcraft"), and Governor Lewis Cass's last name. He says that another text defines "Kalkaska" as meaning "burned over," in reference to the damage that was done by denuding the land during the lumber era. The Urban Dictionary offers yet another definition.

Kalkaska County has more ghost towns than any other county in Michigan according to Brown, because after the logging boom ended it didn't take very long for all the new settlers to figure out that the soil here was useless for farming, and just prior to the Great Depression the population dropped from 8,000 to 3,800. The sandy soil of this region is called Kalkaska Sand. The population as of the year 2000 sat at around 16,000 people. 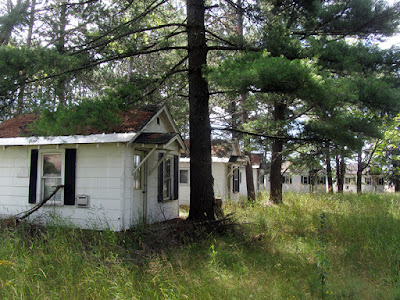 The "cabin row" usually has between four and eight cabins sitting in a line or semicircle, usually each one is identical though there are some that have a unique design for each unit. This one consisted of five cabins.

Often times once-prosperous commercial strips along U.S. highways can be turned into ghost towns in the span of a couple years if another bigger highway is built through the same area; I-75 did this to stretches of US-27 for example. I can't imagine it's for lack of traffic that this business failed, though--the flow of cars along this stretch of highway between Kalkaska and Mancelona was almost constant. 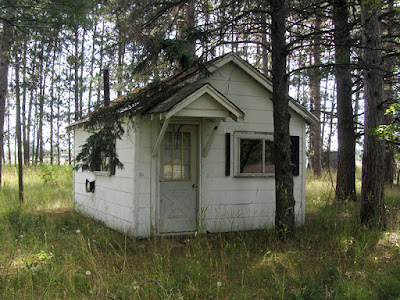 I think the demise of this cabin row may have been more due to the fact that maybe there was too much traffic, and it no longer offered a peaceful rustic appeal to the prospective vacationer. 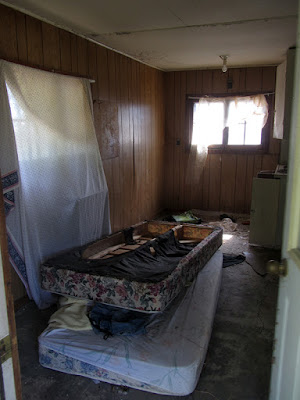 Peeking in the windows and what few front doors would open when tried, I quickly saw signs that these cabins probably found use as transient housing to keep them open as cheap apartments after the tourist trade went bust. 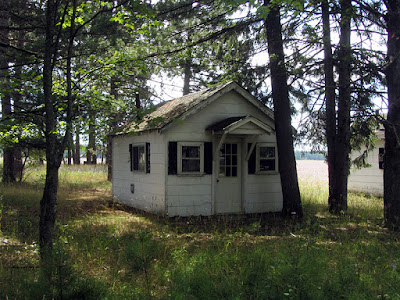 Most likely these had closed for business not too long ago at all. 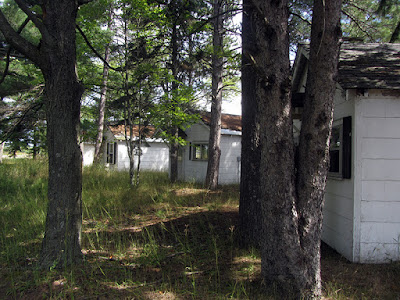 This cabin still bore the appearance of what I would expect an "up-north" motel to look like--dark wooden paneling, a pre-1950s light fixture and cabinetry, and wood sash windows: 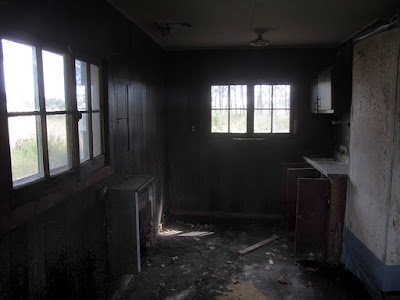 Though the famous Route-66 is usually the go-to example of finding American roadside architecture, I argue that Michigan has several older highways sporting the northern-flavored counterpoint to the southwestern building styles that dominate most peoples' conception of motel architecture.

WaterWinterWonderland has a good photo collection of old roadside cabins from around Michigan. 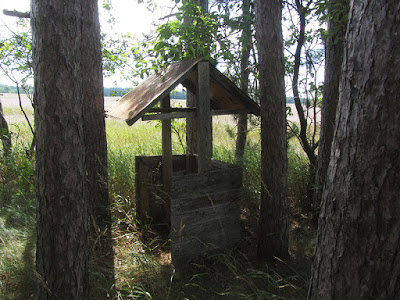 Out back were a couple ancillary structures such as this fake water well, and...utility shed? 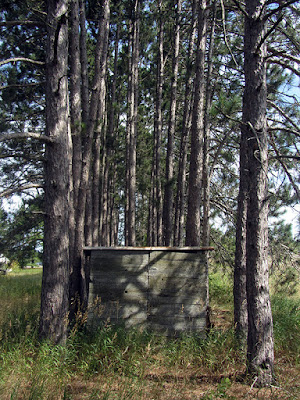 Clearly, this was one of the "l33ter" locations I had explored in some time... 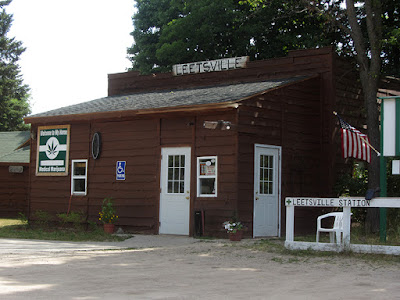 Another thing I wanted to check out in Kalkaska County was part of the Camp Grayling Military Preserve, which is the training grounds of the Michigan National Guard. Among the many bombing and artillery ranges that litter the region is a very surreal scene, a creepy sort of mock-up of an Arabic town that seems geared to train troops for urban combat in the cities of the Middle East (because clearly, that's not going away anytime soon).

From the couple photos I've seen, it looks almost like a movie set--streets with fake-looking buildings  with lots of windows and places that "bad guys" ostensibly could be hiding in; markets, a mosque, and signs in Arabic and English with place names like Al Kut, Al Hillah, and Aqaba. Naturally it appears drastically out of place in northern Michigan, with pine trees in the background instead of palm trees, but the local Kalkaska Sand lends a little authenticity. 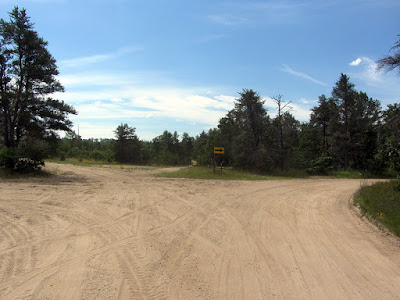 I set out on the rough sandy truck trails that led to this area, with only a 1:150,000 scale roadmap to guide me, and it wasn't long before I was unsure of where I had ended up, or which exact road I had been shunted onto. 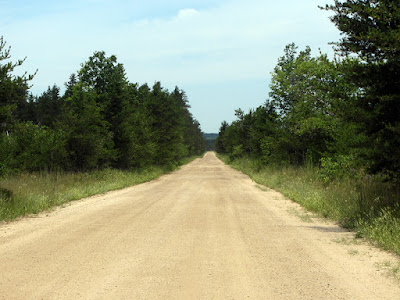 Picking turns at random, I pushed ahead in the general direction I believed was most correct, but there was such a spiderweb of trails out there in the backcountry that I was totally lost in no time at all.

I did pass through the ghost town of Sharon early in my detour, but there were no traces left that I could see. 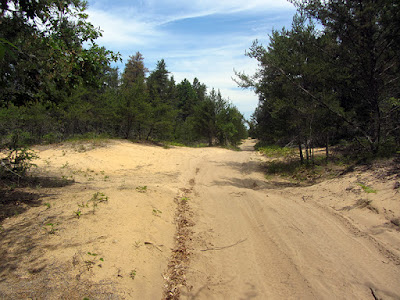 Eventually I popped out on M-72 in another part of the county, and decided to give up until I could get better directions for this one. Stay tuned.