If you spent much time exploring the Packard Plant, you might have noticed this churchy-looking building nearby. According to the sign the last congregation to use this building was New Glacier Appensenior Missionary Baptist Church, and their pastor was Rev. H. Seabrooks. Its large gothic-arch windows make it look like the building was always intended to be a church, but its boxy shape makes it seem as if something is missing, or like this was merely a side-addition to a larger church building that had been demolished. 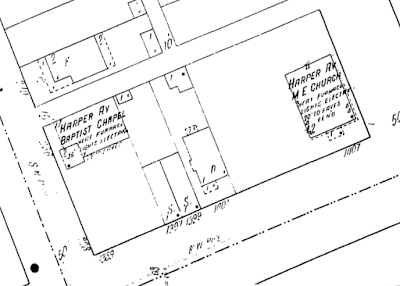 My colleague Ben Gravel's research says that this particular building at 7201 Harper Avenue (1389 Harper by the old city numbering) was erected in 1919 as the Birkett Memorial Baptist Church, and it was designed by the architectural firm of Joseph E. Mills & Sons. Several other churches, schools, and homes were designed by Mills in Detroit, as well as what is now the historic Jam Handy Studios building, the old Oakland County Courthouse, and the Lafer Bros. Building downtown.

Once inside I could see that the pews were all covered in plastic sheeting, indicating that the roof had been leaking, or that the congregation predicted that it would begin leaking before they could either reopen the building or come move their furniture elsewhere. Sadly the interior was not as ornate as I was hoping. This was a working class congregation.

...Yes, that's a toilet next to that pew...it's important to have your throne handy during service though.

The church changed hands a few times over the decades—as Detroit churches tend to do—according to the change in population makeup of the surrounding area. Somewhat unusual however is the fact that through these demographic changes this church managed to remain under the same religious denomination for its entire history: Baptist.

Or, maybe that's not surprising after all?

The church closed in the 1990s and has decayed steadily since then. It was demolished in 2016, just a couple years shy of its 100th anniversary.