Toys in the Attic

I don't always set out to get into places I don't belong, but sometimes it just happens. This was one of those times. 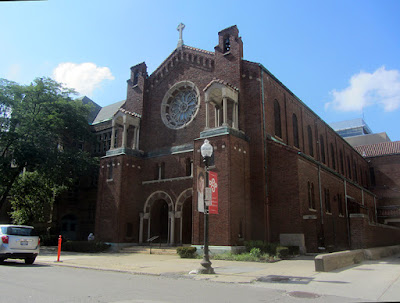 Every year I go to the Irish Festival at St. Patrick's Catholic Church, which is near Orchestra Hall in Detroit. My exploring partner Sloop has family who have been involved in the parish for many years.

The story of St. Pat's is a little confusing...the original St. Patrick's Church was in the Brush Park neighborhood, at 124 Adelaide. The parish was begun in 1862 as Irish moved northward from Corktown. The original church (seen below) was completed in 1871, designed by Jordan & Anderson, and was at first considered by parishioners to be too extravagant. Founding Pastor James Hennessey disagreed, prophesying that St. Patrick's would someday become the Cathedral of Detroit. He was proven correct almost 20 years later in 1890, when Bishop Foley designated that church on Adelaide as the diocesan cathedral. At that time it was also renamed Saints Peter & Paul Church, however. It reverted back to being regular St. Pat's in 1938 when the cathedral was changed to Most Blessed Sacrament on Woodward, and Detroit was designated as an archdiocese.

While St. Pat's served as the city's cathedral, they built a parochial school uptown on Parsons Street in 1892, named St. Therese School (seen below). The walk from school to mass for the students was eventually considered too dangerous as Detroit became more congested, so in 1926 they built a chapel next to it, the Chapel of St. Therese of the Little Flower (seen in the top photo).

St. Therese School closed in 1969, and in 1972 the rapidly shrinking St. Pat's parish moved into this smaller facility on Parsons Street; the Chapel of St. Therese of the Little Flower became the new St. Patrick’s Church. One year later the former St. Therese School was reopened as the St. Patrick Senior Center and food pantry, to minister to the elderly of the Cass Corridor. They have also hosted the St. Patrick's Irish Festival here every June, a tradition that celebrated its 40th anniversary in 2017. The school was designed by local architect Leon Coquard:

Meanwhile, the old St. Pat's church on Adelaide had been sitting abandoned since 1983. 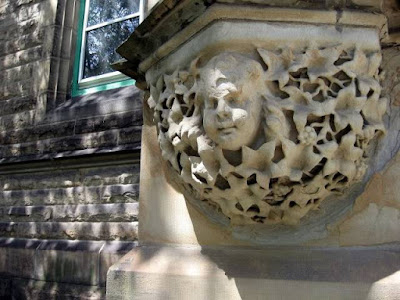 The entrance to the St. Therese / Patrick School is flanked by two rather extensive stone carvings. 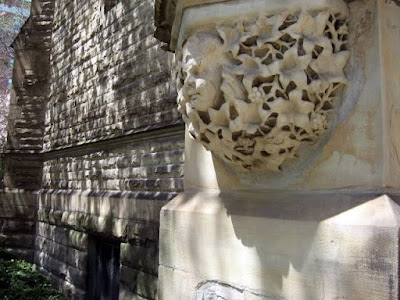 As the St. Patrick Senior Center the building has been serving the senior citizens of the Cass Corridor for the past 45 years or so, ever since Sister Mary Watson opened the doors to cook a decent meal for a handful of needy old folks in 1973. The center now provides a wide range of services, activities, and classes for elderly people of all denominations, and boasts an outreach that extends to over 2,000 residents. I am surprised that many seniors citizens even remain in the Cass Corridor in light of the thorough regentrification of the area.

According to its website, St. Patrick Senior Center offers a comprehensive health and wellness program, a clinic, transportation assistance, as well as classes in art, technology, exercise and dancing, healthy living, and social activities. It sounds like everything a retirement community tries to be, but it's a 501c3 non-profit. The Detroit Area Agency on Aging even dubbed it a model for senior centers in the region. 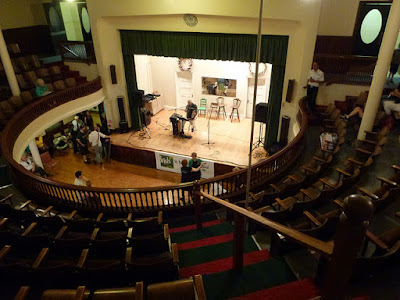 The inside of the old parish school is beautiful, and centered around an old, intimate auditorium. 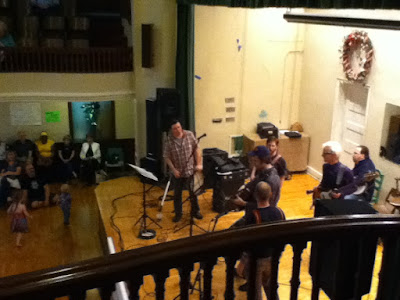 Here is where the bands play during the Irish Festival, kids and old folks dance on the dance floor, and I sit up in the balcony and drink Guinness. The attendees of the festival are an even mix of black and white, which seems odd at first since you don't usually find too many black Irish Catholics anywhere. But, as with many of these obscure Detroit things, we take all kinds. 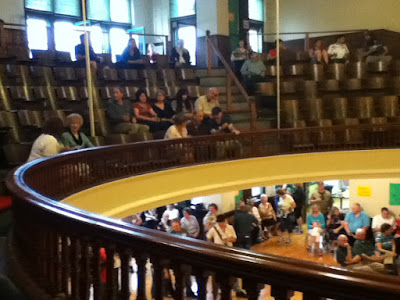 The balcony creaks loudly with its antique wooden construction, and the chairs are probably c.1892 originals. This place is a total time capsule. 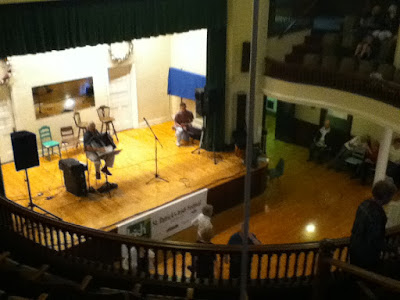 Incidentally the window in the 2nd floor men's room has a unique view of the sanctuary next-door... 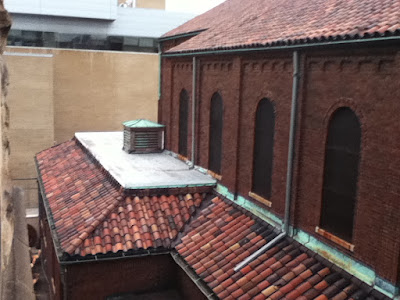 The chapel here on Parsons was built in 1926, although it closed as a church in 2015. I think I heard that the Detroit Symphony Orchestra sometimes uses the chapel as a practice space, or once did a small concert or recording there. 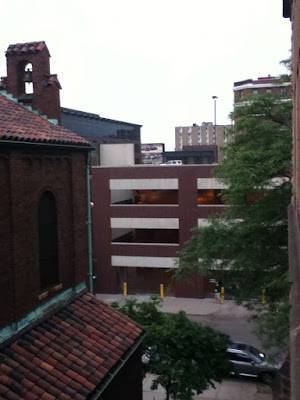 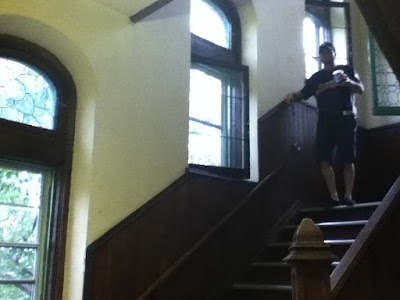 Now having gotten a bit of the barley in us, our mischievous streak inevitably began to take hold... 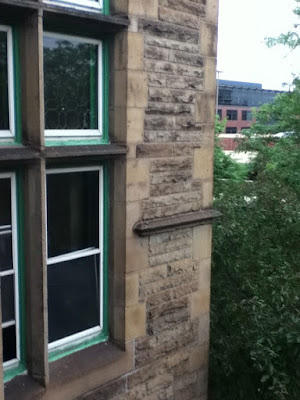 Pretty soon we found ourselves in the cavernous attic...because that's what we do, I guess. 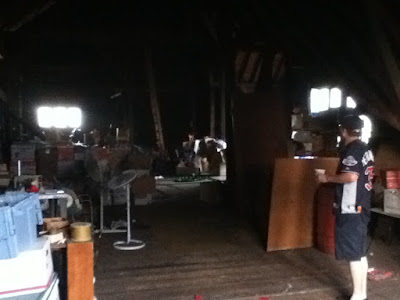 Unimpressed with the large assemblage of rummage sale fodder being stored up here, I quickly turned my attention to the breezy attic window on this muggy summer day. I was pleasantly surprised by the view above the trees: 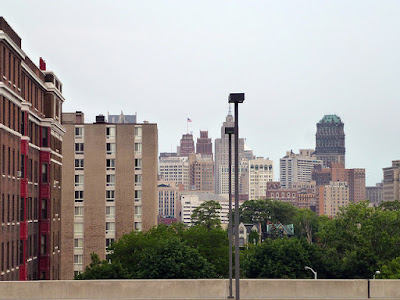 As I often do, I leaned further out and tried to get photos of this building's architectural details. Hey, there's gargoyles or something up there... 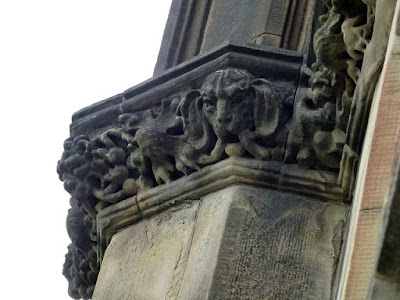 As I gazed up at these hidden little stone faces, I thought that they looked a hell of a lot like the grotesques at the entrance doors of Ste. Anne's Church. As it turns out, this school was designed by the same architect who designed Ste. Anne's, which explains why these look so familiar. He also designed the Soldier's Monument in Grand Rapids. 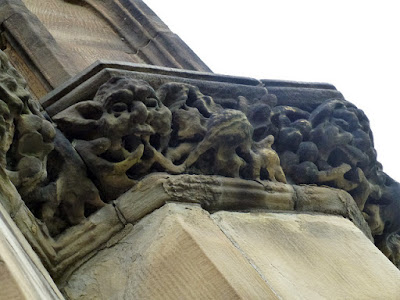 The rear of the Masonic Temple, and the Cass Plaza Apartments: 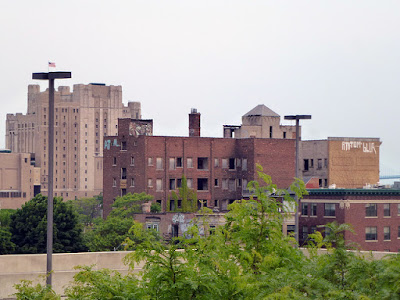 The Hotel Charlevoix and Hotel Park Avenue were still standing when I took these shots, and the ruins of the Scott Mansion had not been rebuilt yet: 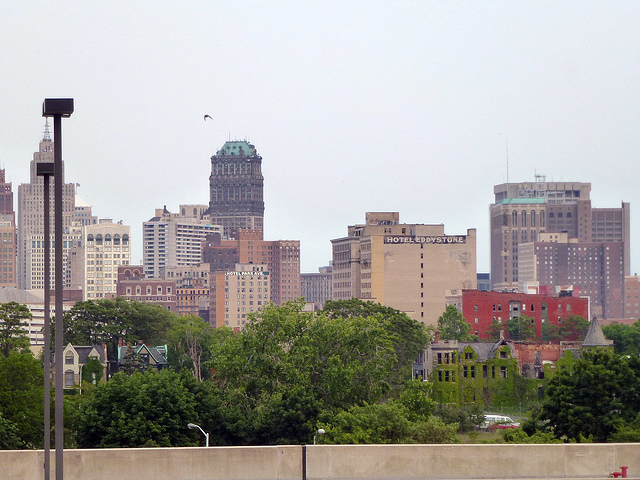 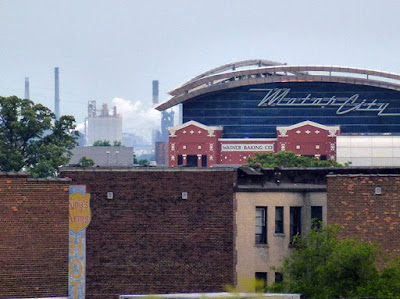 The train station, before the fake windows: 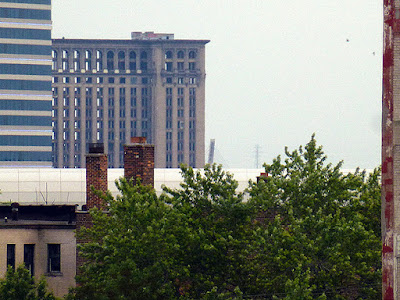 Looking down Woodward towards Orchestra Place and the Bonstelle Theater: 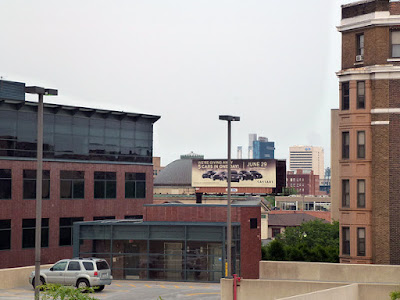 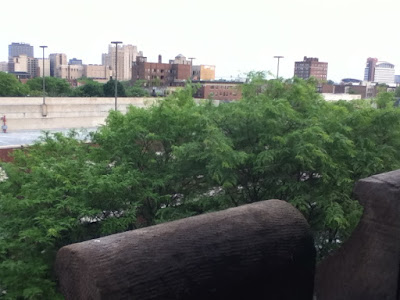 It's hilarious that for someone who can best be described as an agnostic ex-Catholic, I spend so much time at so many church festivals. I just like the buildings. And the beer tent. 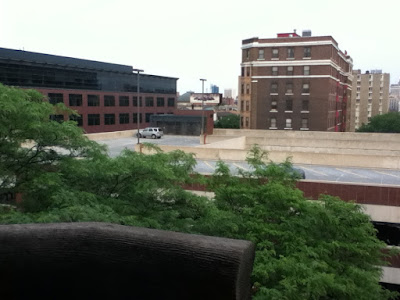 In all seriousness, I do enjoy supporting the many historic church fundraisers in Detroit, whether it's the excellent fish fry at Ste. Anne's, or Pierogi Fest at Sweetest Heart of Mary, the German dinner at St. Joseph's, or the incredible music programs at Old St. Mary's, St. Paul's Cathedral, or Fort Street Presbyterian. Even St. Hyacinth has a Banana Festival that I've been meaning to check out...