If you follow Mack Avenue out across Detroit's east side just before Conner it goes up over the rail yard on a huge modern overpass at Chrysler’s Mack Stamping / Budd Wheel Plant, but tucked off to the side there was a row of buildings that used to stand on Mack before the grade-separation was built. On today's maps it is called "Mack Service Road," but I've also seen it called "Old Mack." It's a dead-end road now, a stub cut off from its parent by the big overpass directing traffic elsewhere, leaving it to die. 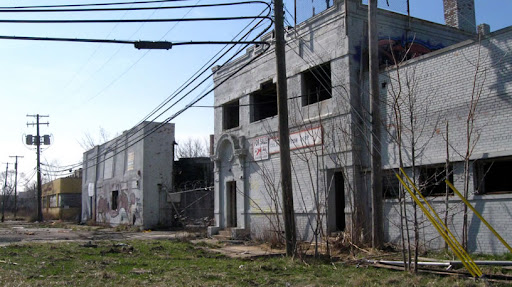 Ruins from one collapsed building were spilling over into Manz Playfield:

As of 2018 most of these buildings have been demolished, so here is a brief run-down of some of their history.

The building on the right in the next photo still bears a date-stone in its cornice, reading “1919”...it was originally the Pitman & Dean Co. (coal & ice supply) at 12165-69 Mack. The sign under the FOR SALE sign says that it used to be the ____ Cold Extrusion Corp. It was occupied from at least 1977 to 1986 by lmerman Industries, Inc., who also did metal extrusion work, according to hits I found via Google Books. 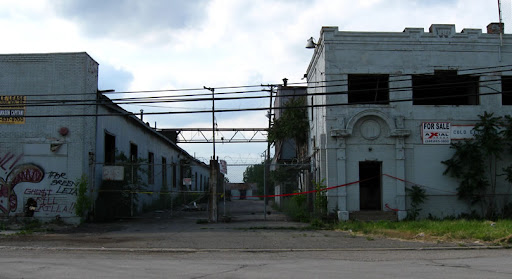 ...The building on the left was originally part of the J.A. MacIvory Lumber Co.'s Mack Avenue Yard. The c.1929 Sanborn map of this street shows the following other businesses here at that time: the McDonald Coal & Brick Co. Yard at 12017 Mack, the C.P. Steinheiser Co. (builders' supplies) at 12035 Mack, and the Grace Harbor Lumber Co. at 12081 Mack. None of them still stand.

Sadly, the c.1910 map does not cover this area, indicating that it was not developed land yet. This spot was still a couple hundred yards outside city limits in 1910, in what was then considered the Village of St. Clair Heights. This block would have been located right under the map key, across the tracks from the Lozier Motors plant:

The Lozier Motors plant once stood at 11801 Mack, a small luxury car company that was started in 1910 to rival Packard. According to the book How Detroit Became the Automotive Capital, Henry Ford and James Couzens visited Lozier Motors frequently to watch the assemblers working on the chassis line in the Albert Kahn-designed plant. Lozier fizzled out in 1915 when Cadillac essentially put them out of business. Their plant was bought by the Motor Products Corp. 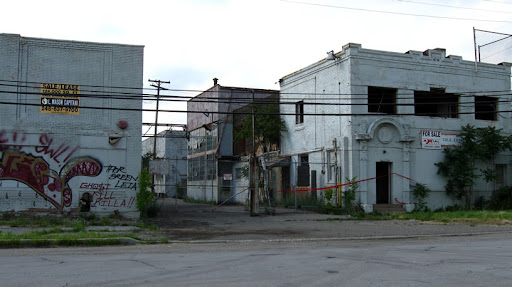 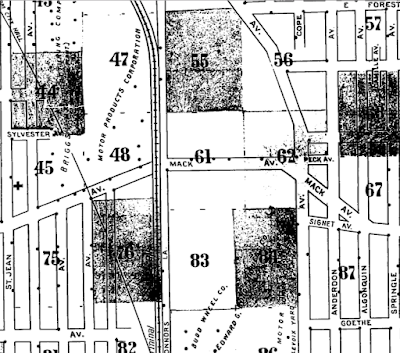 The vacant patch where 55 is used to be a Hudson Motors factory. Across the street on the south side of Mack from us there was mostly empty space in 1929, behind the Budd Wheel and Hudson Motors plants...which were later turned into Chrysler’s Mack Stamping Plant. 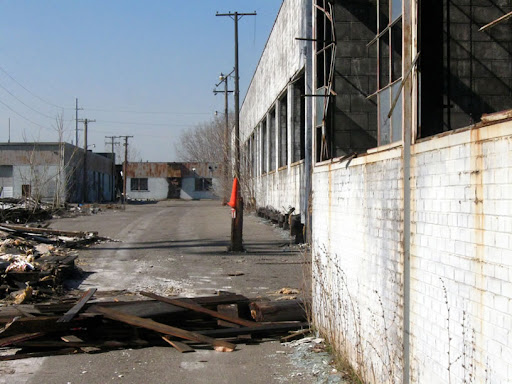 On a later second visit to this street I found there to be massive damage done since I was here last…scrappers got at it. In fact, they were there while we were there. 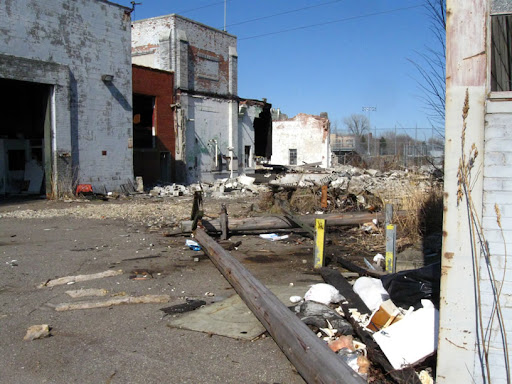 Talk about wrack & ruin...Edison poles chopped down and the whole bit. Keep in mind, this is mid-2009 near the height of the scrapping epidemic. After my first visit, the remnants of this street spiraled very rapidly into complete dissolution. 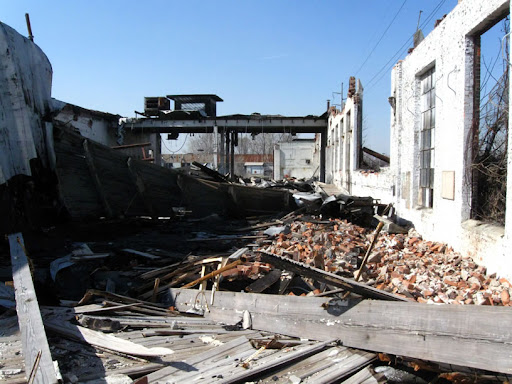 So much for the roof…scrappers “Packardized” that one (ripped out the iron trusses and let it fall). It looks like that is what's getting ready to happen here too, with the iron posts exposed and ready to be notched with a cutting torch, just like lumberjacks felling a tree: 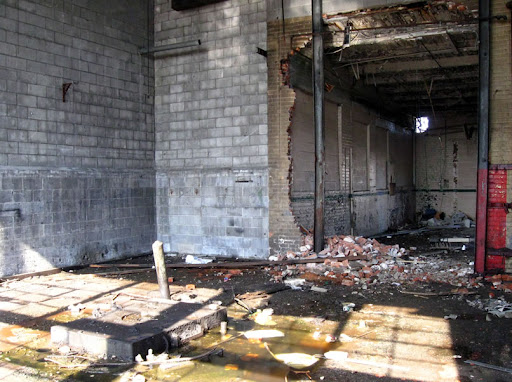 I believe I remember hearing that at least one of these structures was set ablaze too. A cell tower site sits in the middle of the ruins: 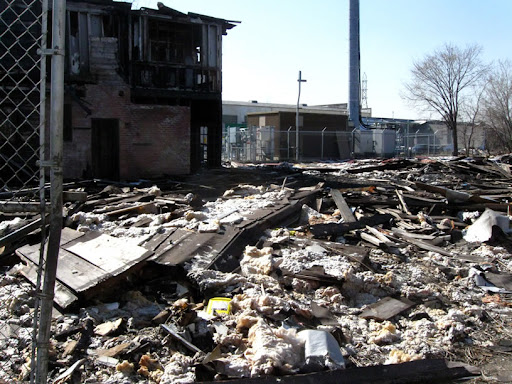 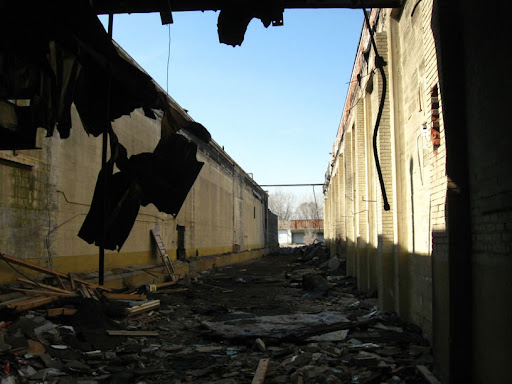 Whoops, bit of a flood here... 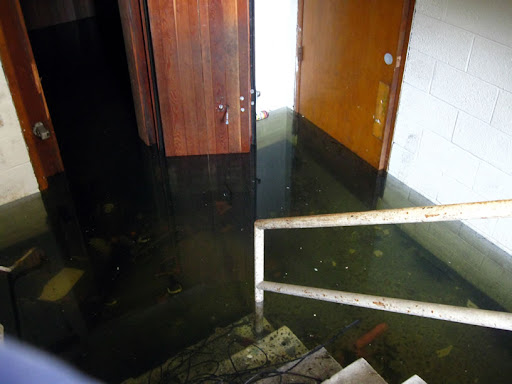 The blue paint mark "W/O" in the next photo means that the water has been shut off to the building by the city (probably after the pipe froze and burst, causing that flood in the photo above): 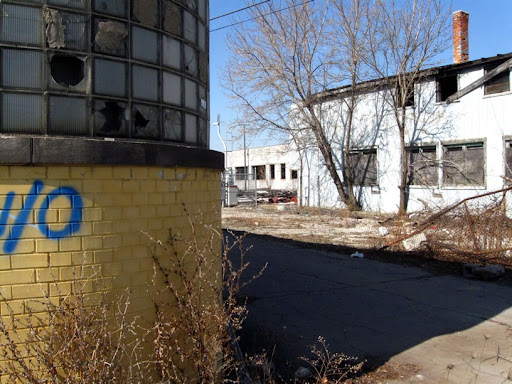 This yellow building, at 12121 Mack, was the Foam Distributing Co., at least according to the sign on the front of the building, and a reference to them in a 1997 business directory. 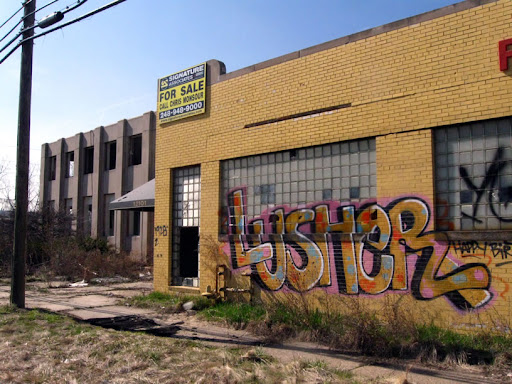 
It was also the location of a popular barn dance every Saturday night...the heart of industrial Detroit seems a weird place to find a shindig, but according to a couple books I searched online, this building was sort of like a country equivalent of the Grande Ballroom on weekends. Local bluegrass pioneer Cranford "Ford" Nix was a member of Local 212 and helped Casey Clark secure the hall for his dances. Besides hosting the "Lazy Ranch Barn Dance" here Casey Clark was a fiddle player who even had his own TV show on CKLW-TV, and deejayed a country show on WJR radio in the 1950s, according to The Birth of the Detroit Sound: 1940-1964.

It probably sounds weird to think that Detroit ever had a country music scene of all things, but don't forget that in the Postwar, post-Depression era, Detroit was flooded by an influx of poor Appalachians looking for work in the factories, and they certainly brought their banjos and fiddles with them. Ford Nix himself worked at the old Chrysler plant here on Mack Avenue. Local 212 was the biggest and strongest UAW local on the east side back in those days, and they represented the Briggs Mfg. plants around here, which were the scene of several major battles in Detroit's organized labor movement.

This Google Streetview image (above) from October of 2011 shows that like many buildings in Detroit during the Great Recession someone painted "NO COPPER" on the front entrance when it was boarded up, to indicate to would-be scrappers that all the valuable metal had already been removed, in hopes that it would spare the building from being ripped open. Little did they know, skyrocketing metal prices would soon lead the scrappers to come for the actual iron structural members of the buildings. 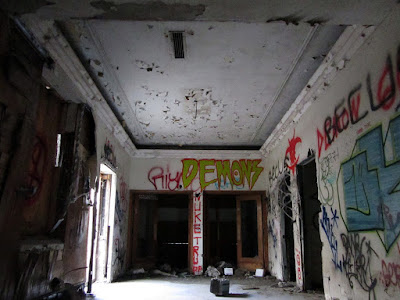 Since learning all this history about the humble little building at the end of a dead-end street, I decided to pay another quick visit in early 2019 so I could actually go inside. I was surprised to find a somewhat decorative entryway (above). 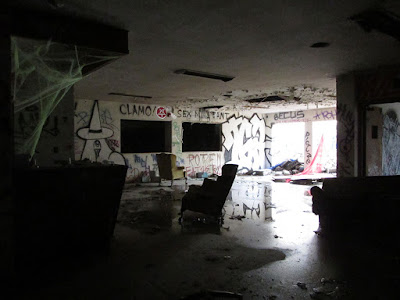 Once inside it looks like there was a small bar here, which is strange because I know that no UAW members ever drink any alcoholic beverages at all! ;) 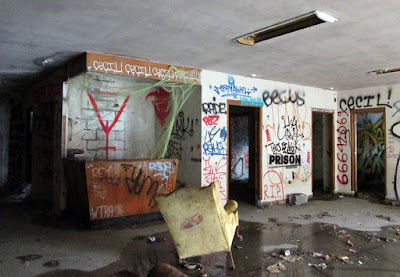 These three doors led into the large gathering space in the rear of the building, which is collapsed: 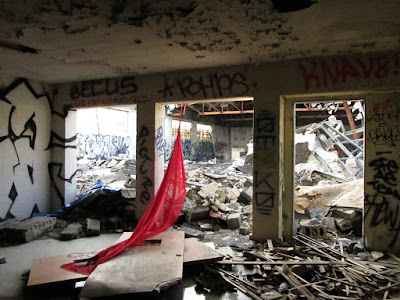 I imagine that this is where the old union meetings and "Lazy Ranch Barn Dances" used to be held, back when Detroit had about a million more people living here. 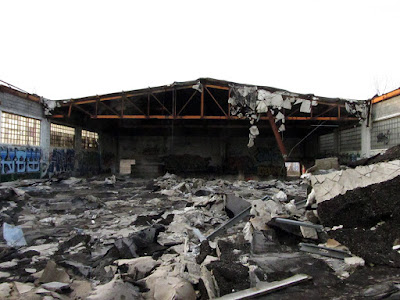