Louder Than Your Ma

Pictures are from 2005-present, and scanned from film prints.


Out at 8952 Grand River Avenue on Detroit's west side is a ramshackle old hall built in 1928 called the Grande, that in my grandparents’ day was quite the hot spot for dancing, music, and meeting members of the opposite sex. 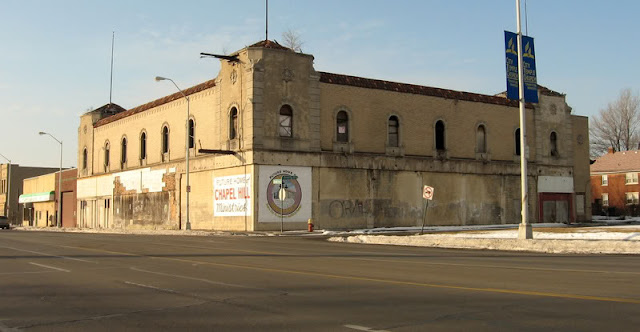 In fact, it was where my grandparents met, and had their first dance, and first kiss (back when that was a big deal). It's also where my dad hung out during the MC5 days, though he probably didn't mention to grandma that that's where he was going. Heh, if it weren’t for the Grande I might not have ever existed.

Over the years as ballrooms were on the decline due to the growing popularity of radio and TV, it was purchased by Russ Gibb who intended to turn it into a rock concert venue. Because of his skillful management during the days when concert tours were becoming big business, Detroit became an important stop for any show, bringing in names like Zeppelin and The Who. 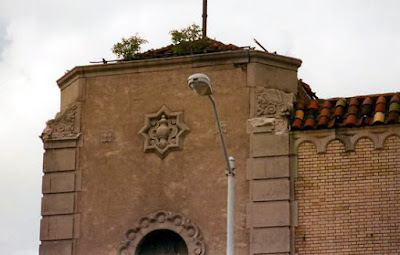 It was because of this that Detroit came to be recognized as the gritty, hard-core rock & roll city that it was, and why to this day almost every major touring band feels obliged to swing through Detroit. As Alice Cooper once recalled, “Any other city, people went home from work and put on their Levi’s and black leather jackets for a concert. In Detroit, they came from work like that.” Not only did it bring in bands from around the world, but it also was the stepping stone to fame for many of Detroit's acts, going all the way back to John Lee Hooker. 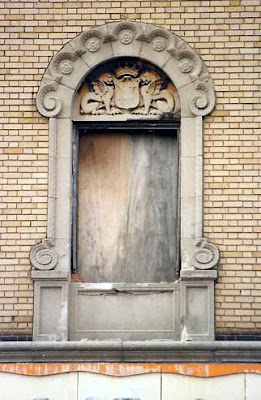 The first rock show was on October 7th, 1966. The first band to take the stage there were the Motor City 5, or “MC5.” The MC5 were the house band until 1972 when they played the legendary farewell show as the Grande closed its doors. It has been abandoned pretty much ever since, but in the hall’s short run it regularly hosted huge acts such as Led Zeppelin, Janis Joplin, The Who, Pink Floyd, Eric Clapton, Cream, ZZ Top, Fleetwood Mac, Jefferson Airplane, Black Sabbath, pretty much every other band that was around then.  Iggy Pop described it in The Detroit Almanac as partially “…an imitation of the San Francisco scene. But Detroit wasn’t San Francisco. So you had these heavy-lidded, peace-and-love people on the edge of violence.” Ted Nugent summed it up: “Dark, dirty, disorganized, and drug-infested.”

For the 40th anniversary in 2006, a lot of outlets were talking about the old Grande, and one person related a story of saying they were at a show in the earlier days that was headlined by Led Zeppelin, but due to some snafu, it was barely publicized. It was Zeppelin’s first ever appearance in Detroit, and only 35 people showed up.

As a result, those 35 people got to witness the most incredible, private show of their lives, after which the band came down onto the floor and hung out with everybody. Another bit of trivia is that the Grande’s owner, Russ Gibb also had a weekend radio show on WKNR, where he became famous for starting the “Paul is dead” rumor about the Beatles on-air, and the resultant frenzy that followed. 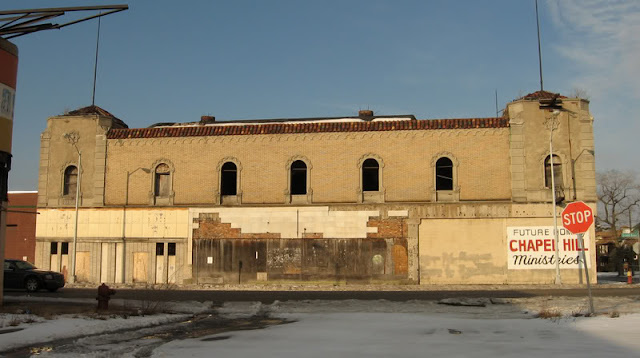 Even in its days as a “legitimate” ballroom it was famous for the names that had graced its stage—all the greats of jazz, swing, and big-band had played the Grande. It was hallowed ground well before Russ Gibb turned it into a rock venue. Along with the even more glamorous Vanity Ballroom on the east side, the Grande was even designed by a name-brand Detroit architect, Charles N. Agree, which alone would’ve made the place important. Gibb said that the Grande had awesome acoustics; the plaster in the ballroom’s walls and ceiling had horsehair in it, which gave it a richer, warmer resonance. 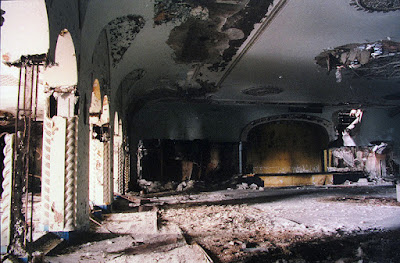 When I visit my grandparents, they are always eager for me to tell them of the places back in Detroit where they grew up, because they hardly ever get back here these days. They find it too sad, because they remember "when Detroit was a real city," and how beautiful it "used to be," etc. We've all heard this before. They always asked me about the Grande with a glimmer in their eye, asking if I had been there yet, and whether it was in good shape still. 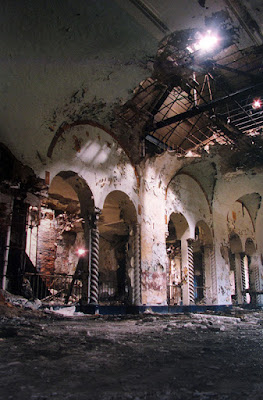 But that’s the typical experience growing up around here, being bathed in the sighs of your elders as they lament with sad nostalgia the loss of the great city that they built, watching it spiral into waste, chaos, and anarchy. Knowing that all the places they lived, worked, and played are now bombed-out charred ruins with bullet-holes and runny heroin-shits on the walls, their facades crumbling into the streets. 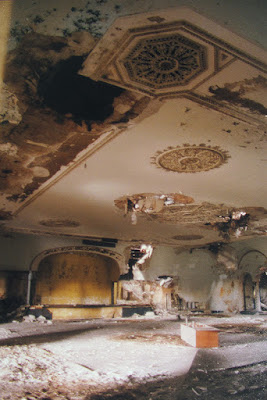 It’s surreal to witness the looks on their faces and the tone of their voices darken and grow solemn with bitterness, anger, and sadness when they think back to what once was, and how it was needlessly thrown away. “And they blame it on us. We didn’t run away. We were chased out.” Regardless, you don’t dare argue with them…you can't argue with an old Arab woman. She always asked if I had seen the stairway—that was the thing she remembered most about the place, the grand staircase that led up to the dance floor. I didn't have the heart to tell her. Some things and some people are best left as they are. 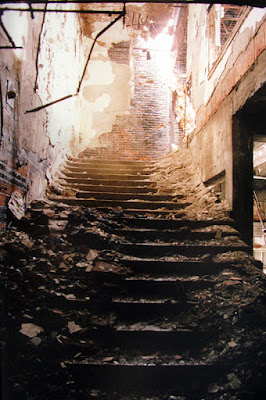 The first time I snuck into the Grande, it was spur-of-the-moment, so for the first time in years I did not have a camera. This made for a very different experience. For once I was forced to stand around while my friends took pictures. It took me back to the days before I ever started taking a camera into abandoned buildings with me, or ever dreamed that I would still be habitually hanging out in such places past age 10--much less documenting them all. It forced me to see with my eyes again instead of a lens. 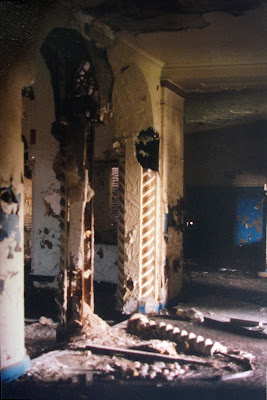 There wasn’t much to see in the place, just a lot of destruction and rot. And it was comparatively quite humble next to our usual fare of palace-sized downtown theaters, all of the grandeur this hall had ever possessed was now faded and glazed-over like a dead man’s eyes. 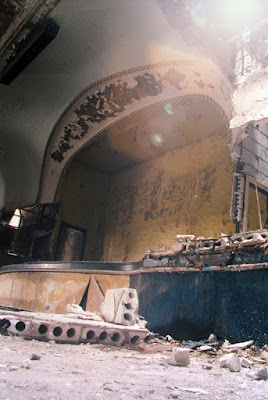 It was hard to imagine a sweaty Jimmy Page standing on this minuscule little stage, rocking the fuck out...or Iggy Pop flailing around like a maniac...or Pink Floyd, who today are not seen without a trillion-dollar lighting and sound system. Yet, looking at the wildly warped dance floor I could somehow feel the energy of the room as if it were 1947 again. 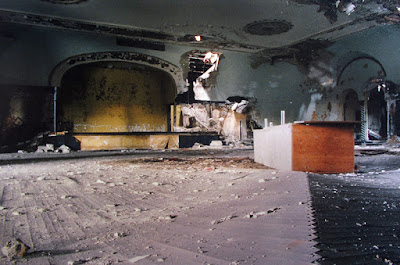 It still had a feel of a neighborhood gathering place, worn dull by the hard heels of a thousand working stiffs cutting loose on a Friday night over the years. 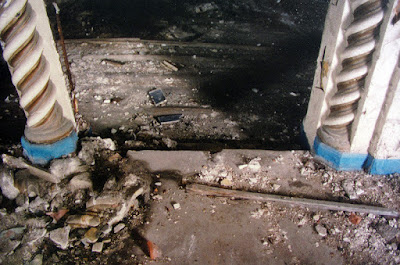 I could almost see the scene play out as my grandparents danced while listening to the postwar hits performed by a snappily dressed swing band. 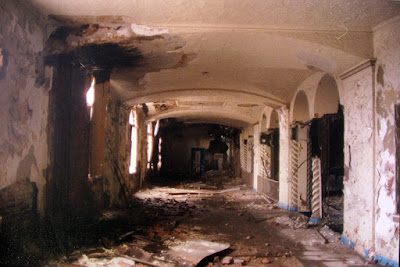 I’ve never felt such life in an abandoned building before, though I’ve had plenty of opportunities. This was something different than the usual factories and office buildings that I was used to; I had a personal connection to this place, and it was an intimate structure. The place leaked, stank, had been totally gutted, and was filled with the trash of the street drifters, but it still just about hummed with history. There were no plans to renovate or save it at the time. 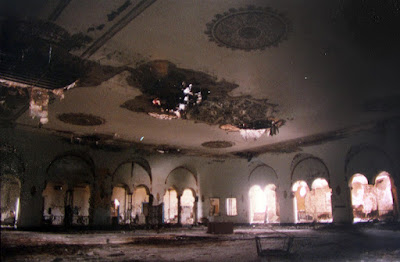 The second time I went, I had someone drop me off with my camera while I did my thing. Once again this was a very different experience, being that I was alone inside and trying to rush with cold fingers while he idled the truck outside. 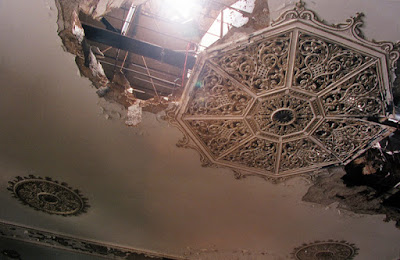 This strangely suspended the natural feelings of nostalgia, and almost made it feel like routine, like I was merely interrupting the building’s slow lament for a quick moment while I took care of the business I had to do. 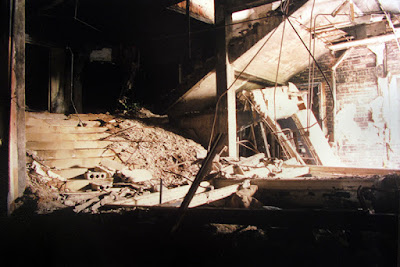 Still, it was hard not to see the apparitions of my young grandparents gaily walking up this very same staircase, and putting their hand on the very same railing, though in a much happier time. Back then, it was decked out with plush carpet and polished brass and beautiful light fixtures. Now however, I had to be careful of my footing so that I didn’t take a tumble down the ice-slicked mounds of plaster slag caked on the steps. 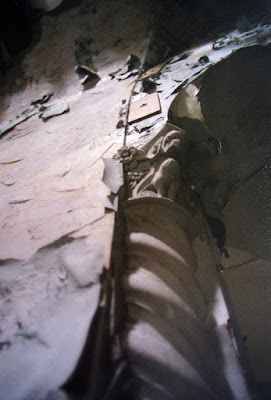 We got a request from a musician friend of ours to take him into the Grande, just to “be there” and “soak it in.” We took him there, and I have rarely seen someone so enthralled—he just stood silent, staring at the stage in reverence for almost 15 minutes, obviously tuned-in to some private concert in his head. The Grande’s a true temple to the Art of Music, and one of the saddest reminders of Detroit’s past. 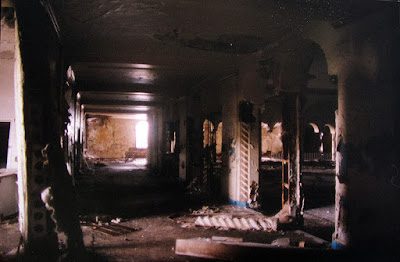 The capitals of the twisty plaster columns that encircled the dance floor included mythical creatures (griffons?), and it looked like a lot of them had already been destroyed by weather or pilfered by architectural thieves: 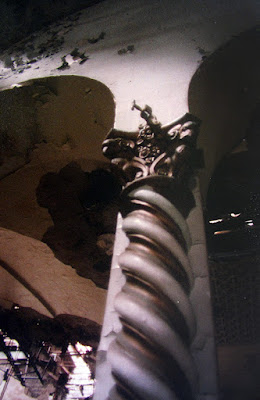 I imagine they probably came to life on a few choice nights here, heheh. Then there was the stairway to the roof, where all the "cool kids" went to screw: 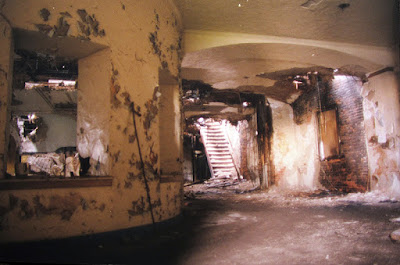 I also went into the minuscule "backstage area," though it wasn't much to photograph; a tiny bathroom essentially, whose walls have now mostly disintegrated. Of course the level of debauchery that went on in there in the '60s was unparalleled, but the Grande was famous for having a very open policy when it came to the talent. Pretty much anyone could walk up to the band after the show and say hello or hang out and smoke a joint.

If anything, the Grande was the antithesis of snobby rock-star culture; the Detroit scene didn't buy any phony pretense--you had to be down to earth and be able to kick out the jams or you would get booed out of the Grande, no matter who you were. Too bad that kind of atmosphere and way of thinking went by the wayside after the Grande closed up...this was truly a magical place, that existed in its own universe, so to speak. 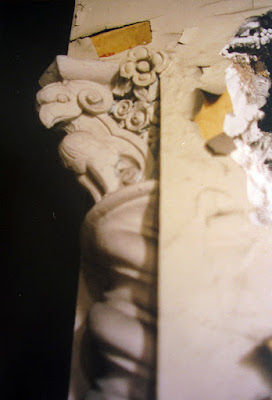 If you go around back in the alley by the stage entrance, there is a lot of graffiti scratched into the brick, mostly names:

The documentary Louder Than Love does an infinitely better job of memorializing the Grande's true importance to the American music scene than I could ever hope to. I saw it when it debuted at the Detroit Film Theater, and I hope it is out on DVD soon. A preview of this excellent film can be seen at thegrandeballroomstory.com